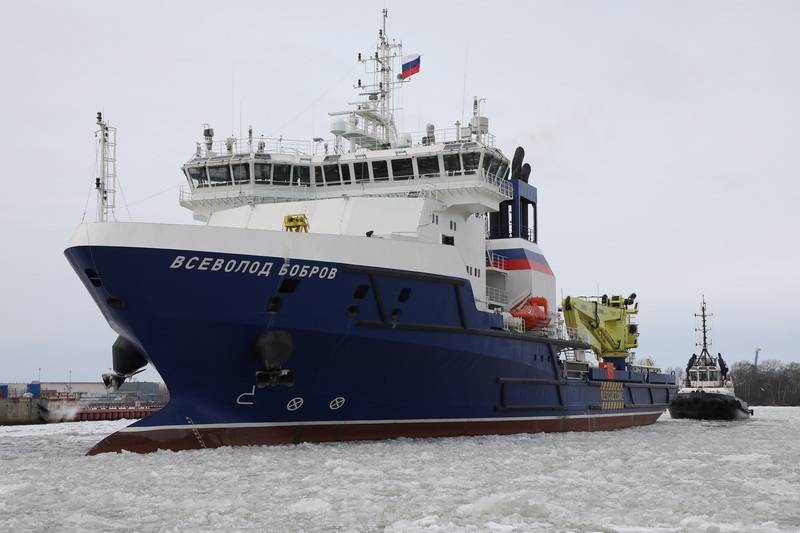 Project 23120 support vessel Vsevolod Bobrov, built at Severnaya Verf, entered the stage of factory sea trials (ZHI). This was reported by the press service of the shipyard.


According to the report, "Vsevolod Bobrov" left the "Severnaya Verf" and entered the Baltic Sea, where it will begin the stage of factory sea trials. The ship's crew and acceptance team are on board. During the ZHI all mechanisms and systems will be tested in sea conditions.

The stage of the factory sea trials will last for about a month, after which in April the ship should proceed to the stage of state trials. Transfer of the support vessel to the fleet should take place in the first half of the year, as previously reported by the Ministry of Defense.

Vsevolod Bobrov is the second ice-class logistics support vessel. Laid down in 2013 and launched in 2016. There are some changes in the design, made according to the operating experience of the lead Elbrus. Named after the famous football player and hockey player, Honored Master of Sports, Honored Coach of the USSR, Olympic champion Vsevolod Mikhailovich Bobrov (01.12.1922/01.07.1979/XNUMX - XNUMX/XNUMX/XNUMX)

The vessel is multifunctional, designed for the carriage of goods, towing, carrying out hydrographic research, providing assistance to ships in distress. The dynamic positioning system allows you to keep the vessel at a given point in all weather conditions. The vessel is equipped with two electro-hydraulic cranes with a lifting capacity of 50 tons, towing winches with a pulling force of 120 and 25 tons, there is a cargo deck with an area of ​​more than 700 sq. m.

The ship's hull with ice class ARC4 will allow it to navigate in arctic latitudes, overcoming the ice thickness of 0,6 m.

Ctrl Enter
Noticed oshЫbku Highlight text and press. Ctrl + Enter
We are
The Ministry of Defense announced the date of delivery of the logistics support vessel "Vsevolod Bobrov"Logistics support vessel Vsevolod Bobrov is preparing for the introduction of the crew
Military Reviewin Yandex News
Military Reviewin Google News
27 comments
Information
Dear reader, to leave comments on the publication, you must sign in.