Effective and effective. Lancers of the Russian army 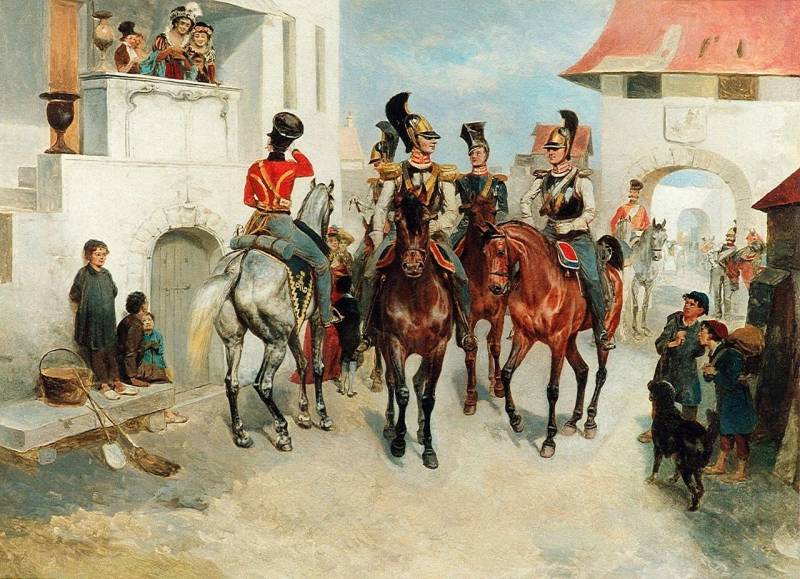 Painting by B.V. Villevade "An Episode from the Foreign Campaigns of the Russian Army 1813-1814". In the foreground, second from the right, is the Uhlan of the Life Guards Regiment

At the turn of the XVIII-XIX centuries. in Europe, a new type of light cavalry, the lancers, became widespread. Cavalrymen of this kind had a number of important features and advantages over other cavalry, which contributed to their rapid appearance and spread in all countries of the continent. In the Russian army, Uhlan regiments existed almost throughout the 1917th century. and were finally disbanded only after the revolutions of XNUMX.

The term "ulans" (from the Turkic "youth") was first used in relation to the Tatar formations of the army of the Grand Duchy of Lithuania. In the XIV century, against the background of the collapse of the Golden Horde, many Tatars moved to the territory of Poland and Lithuania. Such immigrants entered service in the Lithuanian army, where special cavalry regiments were formed from them. In the XVII century. they were officially named the Uhlans.

The Polish-Lithuanian Tatars preserved the military traditions of the Golden Horde, which influenced the appearance and capabilities of the Uhlan regiments. They were light cavalry, armed with pikes, bows, and shields. Over time, bows and arrows gave way to light firearms. Such equipment allowed the lancers to solve a wide range of tasks, from reconnaissance in the rear to strikes against infantry on the battlefield. 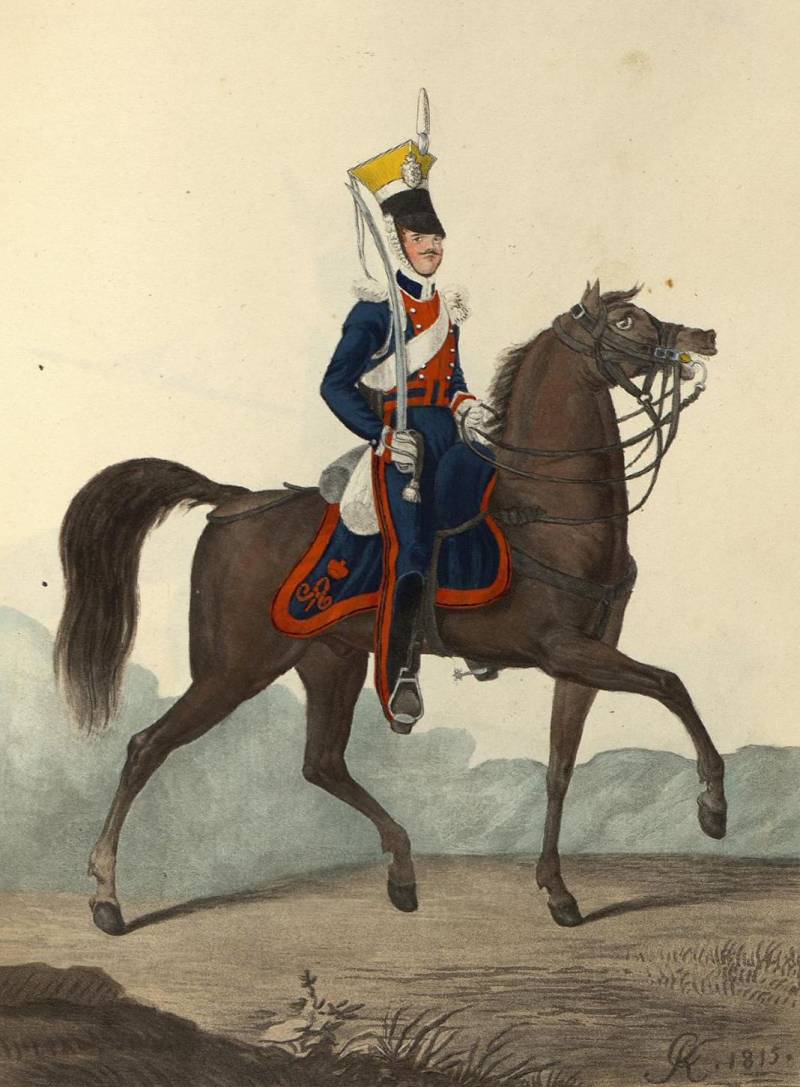 Ulan-officer of the Borisoglebsk regiment, 1815. Drawing by L. Kiel from the book "The uniforms of the Russian army"
In the XVIII century. Poland created its uhlan regiments, and it was her cavalry that later influenced other armies. Polish lancers have formed a number of new traditions. So, it was in Poland that the Uhlan cap with a hemispherical cap and a square top was created. Also, the Polish lancers were the first to put on a uniform with wide lapels, covering almost the entire chest. Later, such jackets "became fashionable" in other troops.

The pan-European trend towards the creation of Uhlan regiments is associated with the suppression of the Kosciuszko uprising, after which many Polish soldiers fled to France. In 1796, on the initiative of General J. Dombrowski, two Polish legions appeared in the French army. A few years later, they were supplemented with the first Uhlan regiment, created and equipped according to Polish traditions. 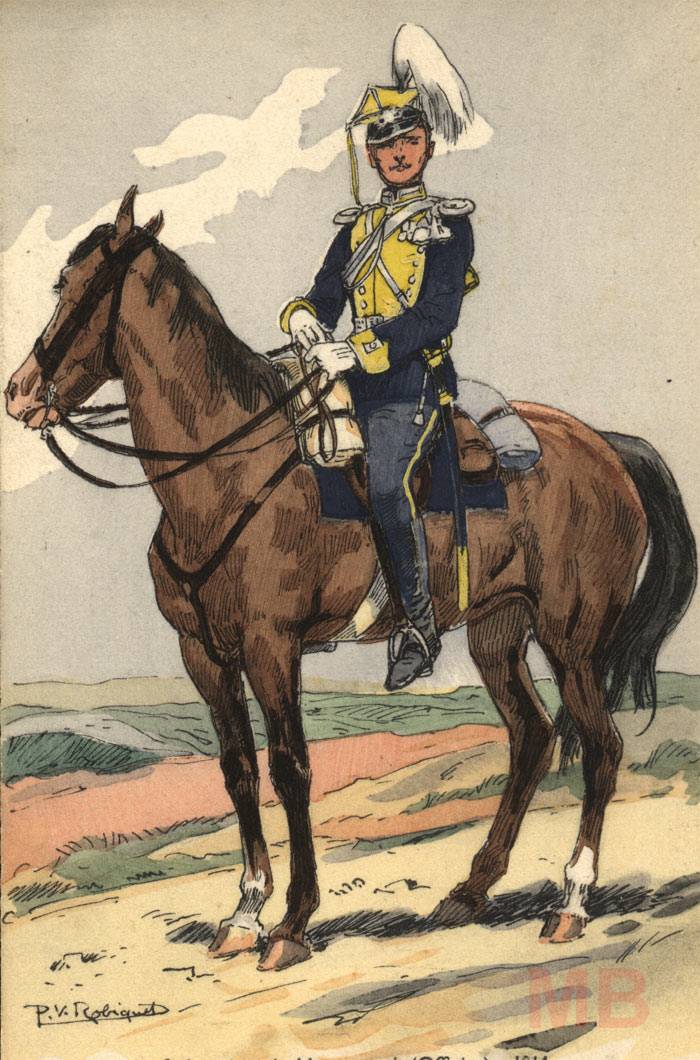 Ulan of the 8th Voznesensky Regiment, postcard 1914 Graphic Wikimedia Commons
Soon, the Polish lancers of the French army showed themselves well in the Italian and Spanish campaigns - and attracted the attention of the commanders of other countries. Over the next few years, their own lancers appeared in all the main states of the continent. The appearance of the Uhlan regiments had a positive effect on the combat capability of the cavalry - they successfully supplemented the cuirassier, hussar and dragoons.

It is curious that light cavalry with pikes appeared in the Russian army long before the general "fashion" for the lancers. The first three regiments of recruited pikemen were formed in 1764 to serve in Novorossiya. At the same time, as can be judged, they were not subjected to serious foreign influence in terms of structure, weapons and tactics.

Formally, the Russian uhlans appeared in 1803. Not long before that, in St. Petersburg, they met the Austrian diplomatic mission, which included a lancer officer. Its spectacular appearance and bearing impressed Tsarevich Konstantin Pavlovich, and he convinced Emperor Alexander I to start forming his own Uhlan regiments. The first such unit was created on the basis of four hussar regiments, from which they took two squadrons. 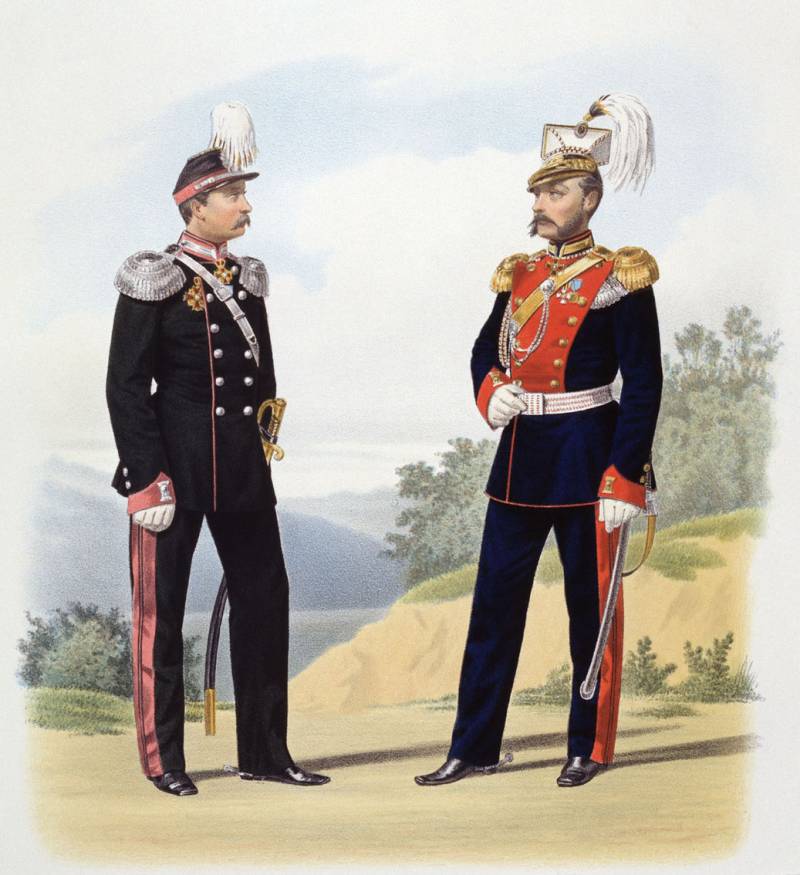 Generals of the 2nd Life-Dragoon Pskov Regiment and the 11th Chuguevsky E.I.V. regiment in front and front uniform. Drawing by P.K. Gubarev from the reference book "Changes in the uniforms and armament of the troops of the Russian Imperial Army since the accession to the throne of the Sovereign Emperor Alexander Nikolaevich"
Before World War II, they managed to form five Uhlan regiments, incl. one as part of the Life Guards. In 1812, five more were created to compensate for the losses of the army. In 1816-17. the second Life Guards regiment and several other formations began service. Most of the Uhlan regiments were concentrated in the western part of the country, closer to the border. Some of the regiments served in other regions, up to the Urals.

In 1827, a new stage of reforming the structure of the lancers began; new shelves appeared and existing ones were transformed. In the following decades, the uhlans reached the maximum number in their stories, after which the contractions began. In 1864, a continuous numbering of the line regiments was introduced, from the 1st to the 14th.

For several decades, many Uhlan regiments provided border protection and participated in all major conflicts on several occasions. This service continued until 1882, when the cavalry reform was carried out. Ulan regiments, with the exception of the Life Guards, were transformed into dragoon regiments. In 1908, the reverse transformations were carried out, as a result of which 17 Uhlan regiments appeared in the army. At the same time, the structure, equipment and tactics remained the same - like those of dragoons. 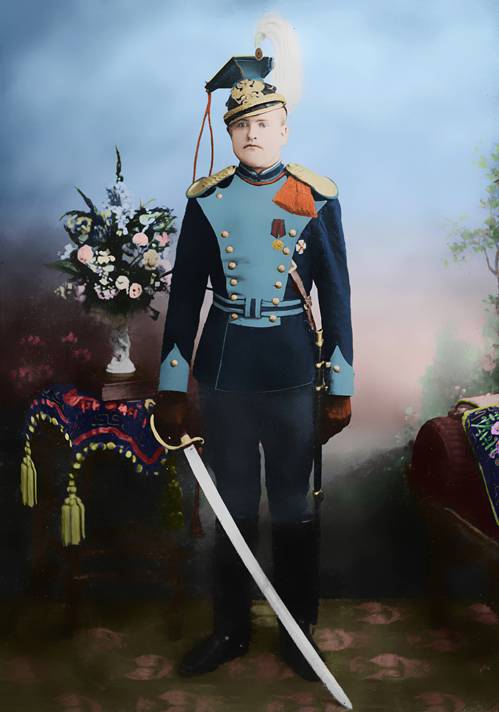 Ulan from the 10th Odessa Regiment in a ceremonial uniform, 1913. Photo by Wikimedia Commons
Since 1914, the uhlans took an active part in the First World War, but the stabilization of the front and engineering barriers increasingly limited their work. In 1918, the uhlans, along with a number of other structures, were finally abolished due to obsolescence and inconsistency with the plans for the development of the newly built army.

The first uhlan uniform was created according to the type of foreign one. She was distinguished by a "Uhlan-style cap" with a square top and a sultan, as well as a uniform with wide lapels. Also included were trousers with cavalry boots. The main colors of the uniform are blue and dark blue. Some elements were made in different colors, which served as insignia, which made it possible to determine the rank and belonging to the regiment.

In the last period of its existence, after the recovery from dragoons, the supply of the lancers had a marching uniform, the same throughout the cavalry. It included a cap or hat, a khaki jacket or a tunic, blue harem pants and boots. For weapons intended for the waist and shoulder belts. The lower ranks wore shoulder straps with the regiment's encryption. 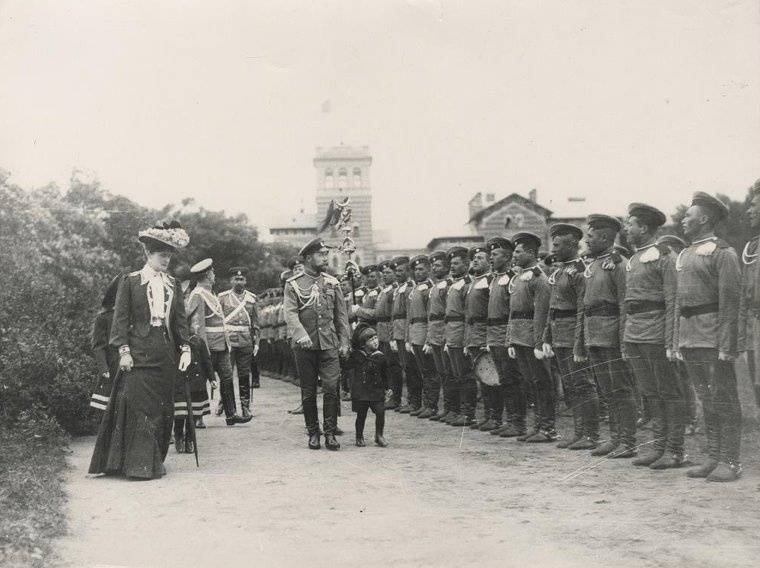 Review of the Life Guards Ulansky E.I.V. regiment, Peterhof 1908 Photo Wikimedia Commons
In the first years of their existence, Russian uhlans were armed with sabers and pikes of the established pattern - for attacking infantry, cavalry or other enemy. On the picks there were flags, the color of which determined the belonging to a particular regiment. Later, the equipment was supplemented with flintlock pistols, which expanded the combat capabilities. Such a complex of weapons remained unchanged until the middle of the XNUMXth century. A few years before the reform, with the transformation into dragoons, cavalrymen were armed with revolvers.

After the reform, the composition of the armament changed again and was almost not corrected in the future. The lancers met the First World War with the Dragoon saber arr. 1881/1909 and revolvers "Nagan". Other types of pistols were allowed, but they had to be purchased at their own expense. The lower ranks were armed with a dragoon saber and a "Cossack" rifle mod. 1891 Part of the soldiers received pikes and revolvers. After the outbreak of the war, due to supply-line problems, the uniformity of equipment and weapons was disrupted.

Troops of the past

Lancers in the traditional sense appeared at the beginning of the XNUMXth century. They quickly showed their high potential and their advantages over other types of cavalry, which contributed to their widespread use and rather long service. In different countries, the Uhlan units in their original form continued to serve almost until the Second World War. However, after that, they also abandoned the morally obsolete cavalry.

It should be noted that the Uhlan units still remain in some armies, but this is, rather, an honorary name for the preservation of traditions. Modern foreign lancers no longer wear spectacular uniforms, are not armed at all with pikes and move on armored vehicles, and not on horses.