For the first time since the Cold War: large-scale rearmament in Great Britain 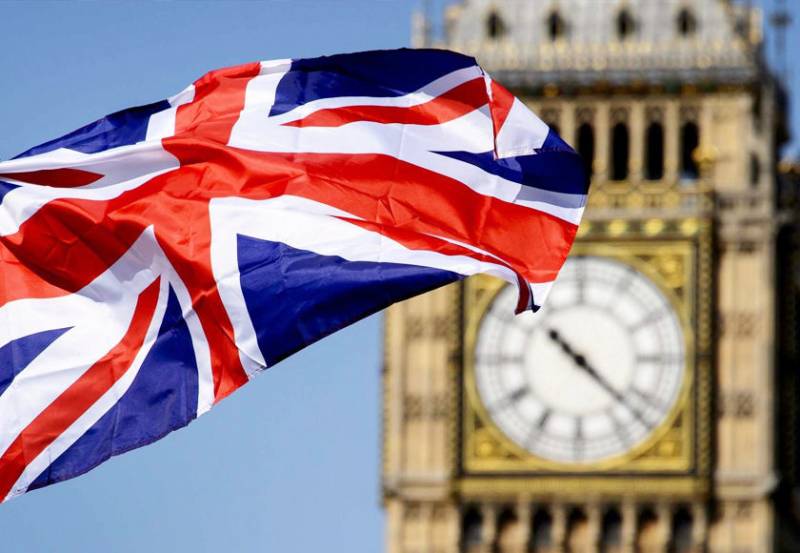 On March 17, United Kingdom Foreign Secretary Dominic Raab delivered a landmark speech, Global Britain in a Competitive Age, highlighting important milestones in the country's future foreign policy. "The power of good" - this is what the concept of Britain's influence on the world agenda is now called. It is clear from the text that the British establishment takes responsibility not only for the well-being of its own citizens, but also for world peace. There are several reasons for such compassion. First, autocratic regimes are gaining more and more weight in the world. Foreign Office analysts predict a significant increase in the aggregate GDP of such countries in the next decade. It is assumed that in terms of economic power, non-democratic countries will soon bypass world democracies. And this, according to the diplomatic department, increases global risks - countries with developed democracies are reluctant to enter wars and sponsor terrorists. Suffered in the report to Russia, Belarus, Myanmar and Hong Kong for suppressing the flame of democratic freedom. In these countries, freedom-loving youth are trying to tell the old guard in luxurious offices that the time has come for new formations of people and the old government is time for rest. The political system of Russia, Iran and North Korea in the diplomatic report is called openly predatory and opportunistic. 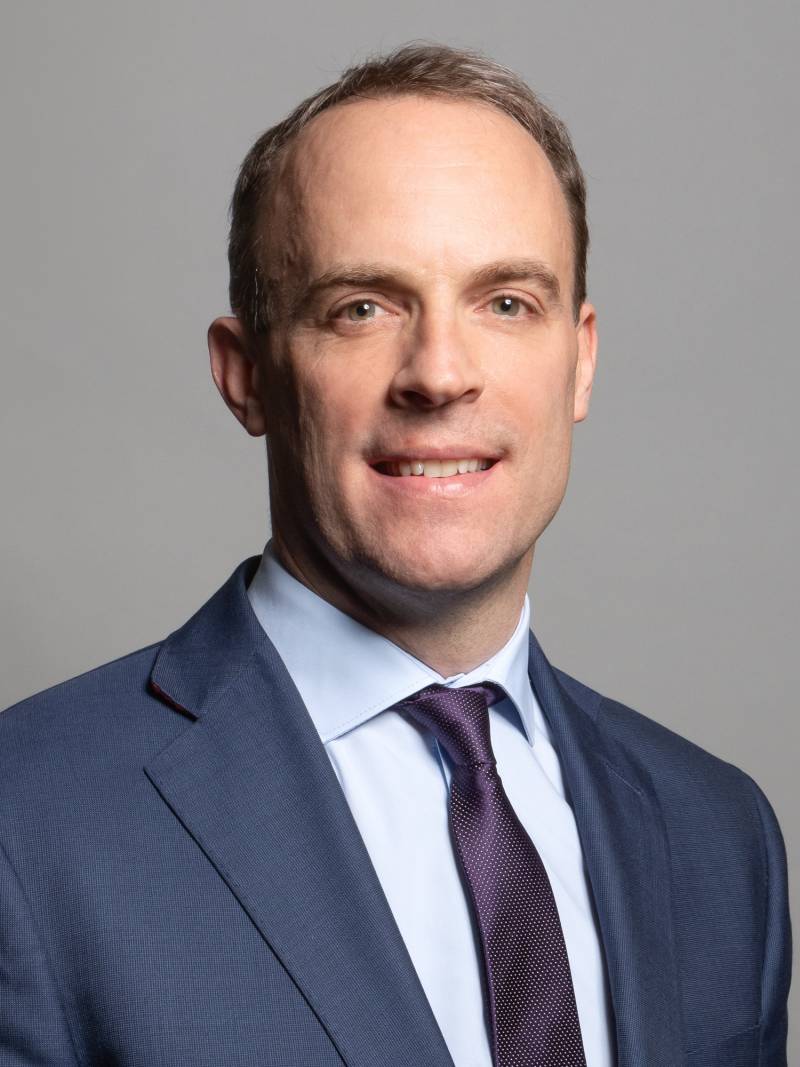 The second threat to the world and Britain is asymmetric threats like the chemical attack in Salisbury. The technological level of such stocks is growing, and the British cannot ignore this in the future. It is noteworthy that Dominic Raab did not give any concrete steps to stop such threats.

The Ministry of Foreign Affairs named the most important threat to the whole complex of what is happening around - global warming, the risks of pandemics and the danger of nuclear proliferation. weapons.

The entire rhetoric of the British diplomat is full of threats emanating from the outside. Do you feel that London is simply looking for external enemies to justify its own political and economic miscalculations? For example, the consequences of the notorious Brexit. But more on that below. 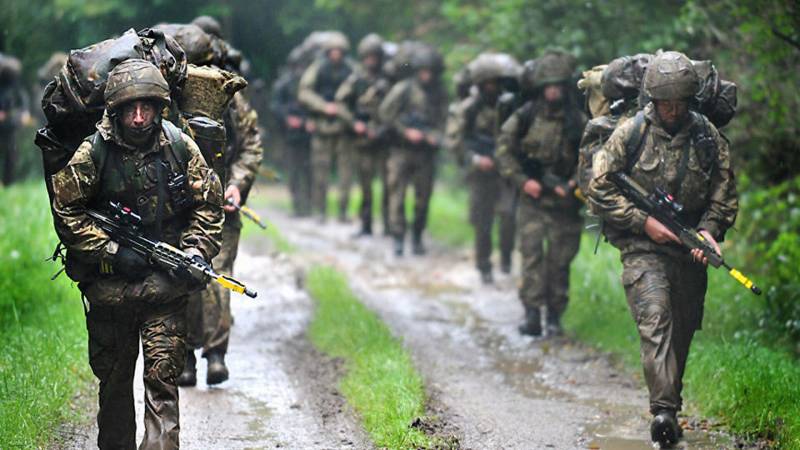 The situation in the British army does not yet allow the country to dominate the world arena. Source: © Flickr / Royal Navy Media Archive
The UK has many challenges to tackle in the future. Technological leadership should provide the country with new tools to influence the course of world events. Great Britain, once a global trendsetter in technology, is now clearly not among the world's leaders in this respect. Artificial intelligence, quantum computing, space, cybernetics and biotechnology should become growth points. Raab goes on to talk at length about the UK's advantages in the global education, science and trade markets. Actually, all this история was the lead for the main event - an increase in national defense spending by 24 billion pounds at once. Another 4 billion will be allocated to innovative technological projects. According to London's plans, Britain is to become the leading naval power in Europe in the next four years and seriously renew its ground forces. The logical chain of state development for the next ten years is quite simple - to invest in military construction in order to once again become Global Britain “Global Britain”. It is not entirely clear how this fits in with the declared course "The Power of Good". Meanwhile, the government of Boris Johnson will still have to look for resources for such a large-scale rearmament - Brexit, coupled with the pandemic, has already dealt a tangible blow to the economy of the island state.

The search for external enemies and plans for rearmament for the British government are indeed one of the few lifesavers. The first will allow you to calm down an overly impressionable public and convince that all troubles are due to autocratic regimes and their growing power. And cash injections into the defense sector will support the industry and provide new jobs. Moreover, the consequences of Britain's exit from the EU can hardly be called positive. The coronavirus pandemic added a fly in the ointment to the process of separating the island state. As you know, the last year the country was in a fever from lockdown to lockdown, and so far no clearing in the epidemic situation is expected. But the crisis phenomena associated with the full withdrawal of Britain from the EU zone on January 31, 2021, were not long in coming. First, the Scots are outraged together with the Scottish National Party. They did not vote for leaving the EU and are now demanding multi-billion dollar payments from the rest of the especially "smart" British. Let those who are to blame for the economic crisis pay - the logic of the Scots can be understood. Scotland's Prime Minister Nicola Sturgeon is generally determined to first secede from Great Britain and then return to the fold of the European Union. It remains only to obtain permission from London to express the will of its own citizens. Here you can engrave the words of the Scottish Premier in gold letters:

“If London refuses to give its consent, we must see if the Scottish Parliament can pass the necessary legislation. This issue has not yet been raised in court, but I do not exclude it. We cannot let the British government block democracy. "

Indeed, why is a country that stands up for the freedom of democracy in the world so inattentive to the completely legitimate demands of its own citizens? 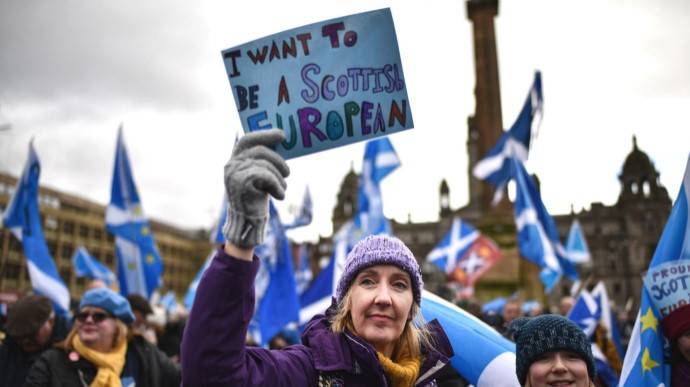 Scotland is ready to return to the EU as an independent player.
Apart from the internal political cracks due to Brexit, the British have suffered a lot of economic losses. Small and medium-sized businesses focused on exporting to Europe are already drowning from bureaucratic delays and taxation associated with the emergence of new borders. Due to the pandemic, about 6 pubs and restaurants have already closed and will never reopen. Large companies will be forced to cut costs and, consequently, cut staff. London is trying to distribute money to the needy, but the budget is not rubber, and the national debt in this regard has reached a record high. Even bees have suffered from the introduction of Brexit. For decades the UK has imported bees from Italy, Greece and Spain. Now this process, for obvious reasons, has either risen noticeably or has become completely impossible. Bees are needed in Britain not only for the production of honey, but also for the pollination of fruit crops. In general, the created ecological chain will fail in the near future, and British farmers will miss up to 30% of the harvest.

It is noteworthy that Boris Johnson calls these problems nothing more than "childhood illnesses." It is supposed to treat ailments with time and multibillion-dollar infusions into the military-industrial complex.

In four years, Boris Johnson intends to build a host of new weapons both for export and for his own army. You could say Britain is preparing to experience a new industrial revolution. Dissatisfied Scots will be entrusted with the construction of warships, Northern Ireland will deal with space satellites, and modernized Challengers with new guns will be produced in Wales. There are plans to create a space weapons center and even launch its own rocket in 2022. Cyber ​​units of the British army will fend off network threats from Russia and China. It is also planned to start developing and producing lithium in Cornwall - before that the only working lithium deposit in Europe was in Portugal. This anti-ecological decision had to be made due to Boris Johnson's environmental initiative to abandon internal combustion engines in the next ten years. It can be assumed that "green" technologies will come to the military sphere as well - it is necessary to put the products that are difficult to export somewhere. And there are plans for the widespread construction of wind turbines, which will require new billions and billions.

A £ 80bn defense budget should put Britain in the second highest military spending in the NATO bloc. Johnson intends, with saber rattles, to restore the country's prestige after the generally scandalous agreement to leave the EU. Similar militaristic sentiments in London are unanimously supported by both parties and the cabinet. It's all about the conservative pacifists of David Cameron, who at one time reduced defense spending by 8 billion pounds at once and reduced the size of the armed forces by a quarter. And the total shortfall in the military budget reached 13 billion pounds. It remains only to find the required billions and not to slide the country into hyperinflation. 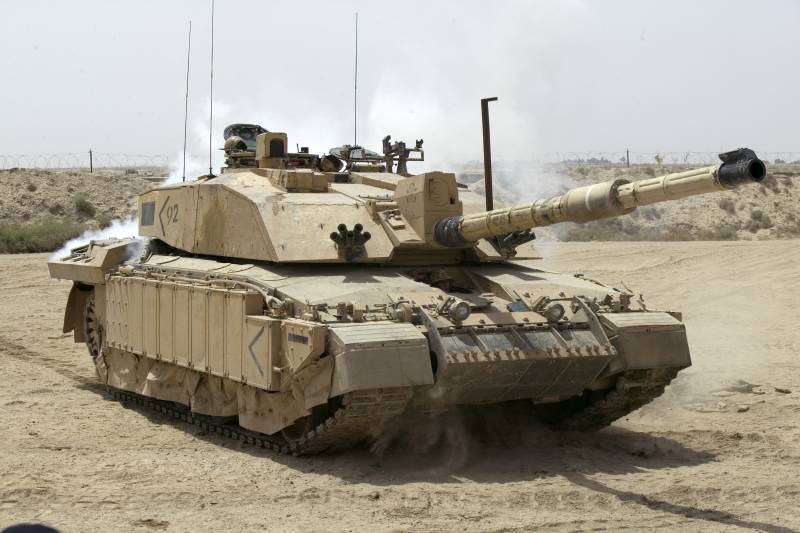 The modernization of the British army on the ground will be an important part of the $ 80 billion budget. Source: tyt.by
The situation with plans to overcome the corona and Brexit crises raises several new questions. Firstly, Britain withdrew from the European Union, which was conceived, among other things, as an anti-militaristic union of countries, and immediately began to arm itself. Even after the Second World War, Europeans believed that countries closely linked by trade would no longer fight. London, as if in confirmation of this thesis, intends to become the military power number 2 in NATO and, probably, even in the world. And the second thesis. Singing a good old song about external enemies in an era of crisis, Great Britain will further aggravate relations with "autocratic" Russia. Another state joined the Cold War 2.0. And this is perhaps the most unpleasant conclusion from the Brexit crisis.

Ctrl Enter
Noticed oshЫbku Highlight text and press. Ctrl + Enter
We are
Situational analysis of the death of the MH17 flight (Malaysian Boeing 777), made on the basis of engineering analysis from 15.08.2014Results of the week. "God forbid to see Russian revolt, senseless and merciless!"
Military Reviewin Yandex News
Military Reviewin Google News
52 comments
Information
Dear reader, to leave comments on the publication, you must sign in.