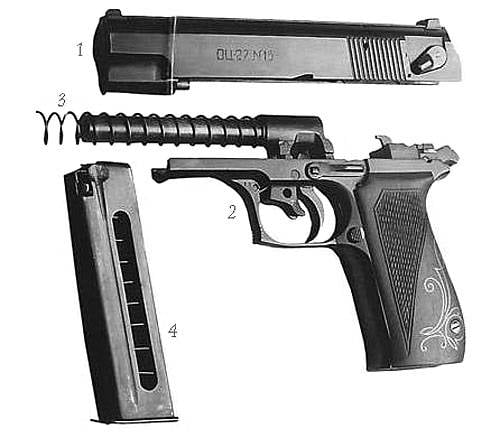 Currently, the main type of short-barreled weapons, used in the army, law enforcement agencies, private security companies and civilian circulation, are self-loading pistols with a movable barrel and a bolt rigidly attached to it, designed for the use of high-impulse cartridges of 9x19 and 9x21 mm calibers. Simpler models of pistols with a fixed barrel and a free breech, using low-impulse cartridges of 9x17 and 9x18 mm calibers, are gradually being removed from service and forced out of circulation. This is due to the insufficient stopping effect and penetrating ability of the latter in the conditions of the proliferation of body armor.

In addition, the movable barrel reduces the accuracy of short-barreled weapons, limiting the effective range of fire to 25 meters. The fixed barrel allows this distance to be increased up to 50 meters.

In the early 1990s, an attempt was made in our country to modernize the most common PM pistol with a free breech by creating cartridges with a larger weight of powder charge, which coincide in size with standard cartridges 9x18 mm. The modernized PMM pistols entered service with law enforcement agencies, but were soon sent to warehouse storage due to the small resource of the weapon due to the high recoil momentum.

To eliminate this problem in the early 2000s, an OTs-27 pistol was developed chambered for 9x19 mm with a free breechblock, a heavy breechblock and an elastomeric buffer, which solved the problem of a small frame resource, but had a lot of weight, which made it uncompetitive in comparison with such widespread pistols such as the Glock-17 of lesser weight. In the German pistol HK VP70 with a free blockage of 9x19 mm, which was put into service in 1970, a spring recoil buffer was used, which also significantly increased the mass of the pistol. 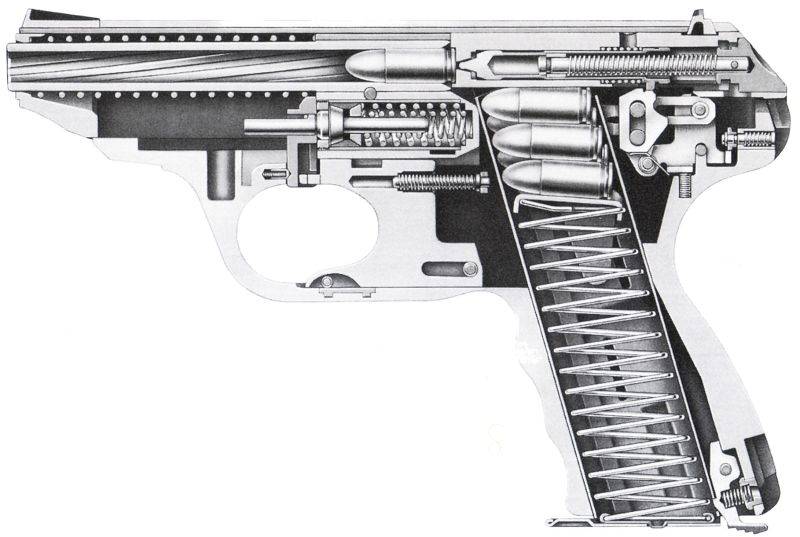 The use of a free bolt in pistols with a caliber of 9x19 mm and more is complicated by two factors:

- rupture of the spent cartridge case in the process of its exit from the barrel under the conditions of the pressure of the powder gases until the bullet was released (the safe constructive exit of the cartridge case is 3 mm, which is ensured in pistols with a movable barrel and a bolt coupled to it);

- the multiply increased recoil speed of the free bolt in comparison with the recoil rate of the coupled barrel and bolt, as a result of which the frame experiences heavy loads when the bolt strikes it. 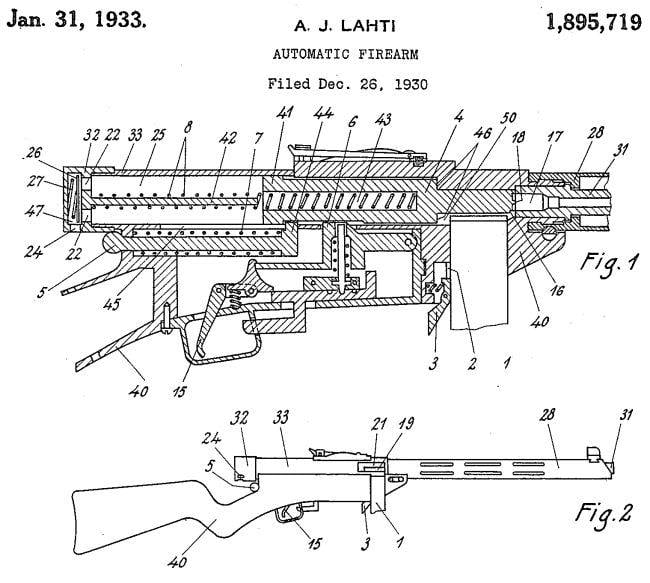 The rupture of the liner is eliminated by increasing the mass of the bolt from 300 to 400 grams. Reducing the shock load on the frame is achieved by using a buffer, including a pneumatic one - the lightest known, used in the designs of submachine guns with a free breech: the Finnish KR-31 Suomi and the German MR-38/40. In the first PP, the working cylinder of the pneumatic buffer was located behind the gate and was equipped with a valve, which was triggered at the moment the gate came to the extreme rear position, releasing the pressure in the cylinder. In the second PP, the working cylinder was made in the form of a telescopic casing of the return spring, equipped with throttling holes with a flow area an order of magnitude smaller than that of the casing.

In order to reduce the mass of a pistol with a free bolt of 9x19 mm and more to the level of its competitors with a movable barrel and a bolt coupled to it, the VP-20 pistol concept offers:

- to reduce the weight of the bolt to the level of PM (300 grams) by increasing the distance of the safe exit of the cartridge case by “drowning” the cartridge case in the barrel chamber and entering the ejector into the chamber;

The cartridge sent to the barrel is immersed in the chamber 1 mm deeper than in conventional pistols so that only the sleeve flange protrudes beyond the breech end of the barrel. The spent cartridge case ejector goes into the depth of the barrel chamber by 1 mm (the thickness of the cartridge case bore). The dimensions of the groove in the chamber are 1x1x2 mm, which is comparable to the dimensions of the Revelli grooves in the chambers of the weapon barrels with semi-free locks, which provide permissible plastic deformation of the metal sleeve when fired.

The ejector is located at the upper point of the shutter mirror, so the cartridge flange fits freely under its tooth (in contrast to the lateral placement of the ejector in known pistols). The reflector of spent cartridges / misfire cartridges is installed on the frame in the same vertical plane with an ejector with a slight shift to the left to eject the cartridges in the forward-up-right direction. 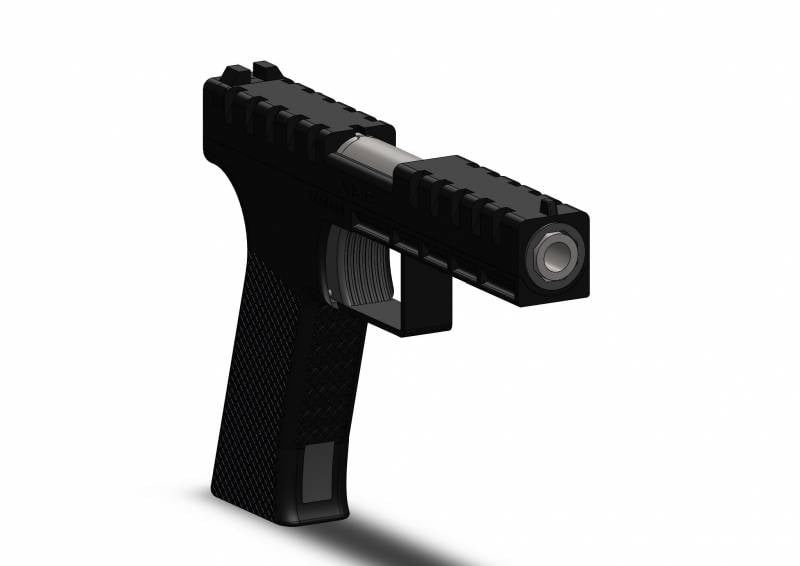 On the inner surface of the shutter, there are grooves passing over the compression ring at the moment the shutter speed is reached, in order to release the pressure in the working cylinder to atmospheric, after which the pneumatic buffer begins to work in pump mode when the shutter is rolling under the action of the return spring, softening the impact of the shutter on the frame at forward position.

Detailing of the pistol concept

The concept of the pistol is configured like a PM pistol, differing from it in the handle for a double-row magazine, a shock trigger and the absence of any controls on the side surfaces. The controls include only the release button, located inside the protective bracket, and the magazine latch, located on the front lower tide of the pistol grip.

Protection against an accidental shot when the pistol falls is provided by inertial devices as part of the trigger. The shutter delay is turned off automatically when an empty magazine is removed from the pistol.

The length of the sighting line is 176 mm (versus 164 mm for the Glock-17), the tilt of the handle is 107 degrees (versus 108 degrees), the distance from the butt plate of the frame to the table axis is 14 mm (versus 18 mm) while maintaining the normal grip of the shooter's hand in contrast to the piled-up sports grip of the PL-15. The normal grip allows, at a short distance, to intuitively aim the pistol at the target without using sighting devices, focusing on the direction of the index finger of the hand lying on the trigger.

The magazine capacity is 15 rounds (versus 17 for the Glock-17) due to the insertion of the loaded magazine into the pistol only when the bolt is located in the extreme forward position and the pistol grip width is limited. The length of the breech part of the barrel increased to 50 mm with a greater wall thickness allows the use of reinforced cartridges of the 9x19 + P + and 9x21 mm type with a maximum pressure in the barrel of up to 3000 atmospheres.

The muffler is installed with a loose fit on the smooth muzzle of the barrel protruding beyond the butt end of the bolt with fastening by hooks on the side guides of the frame. The length of the side guides is sufficient for simultaneous installation with a silencer of an underbarrel tactical flashlight / laser pointer and a supra-barrel optical sight (fixed relative to the shutter). 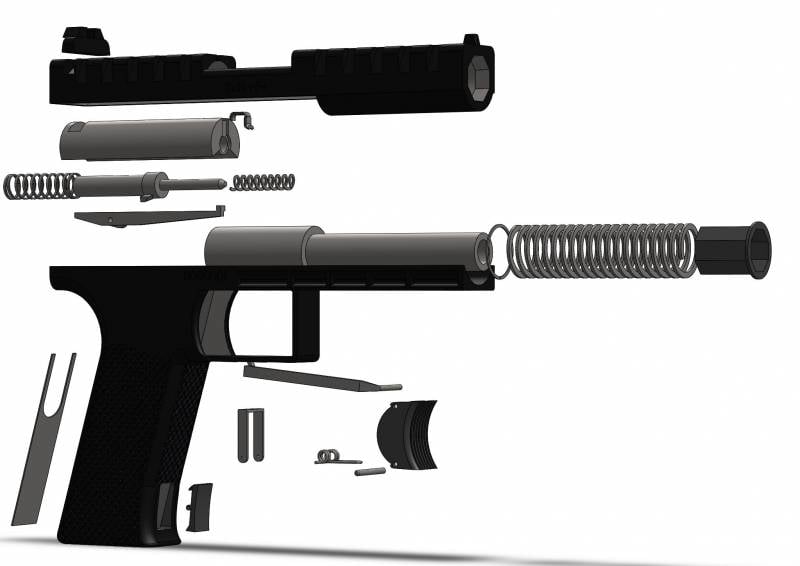 By optimizing the design, the concept of a pistol without a magazine includes only 16 assembly units, which is almost half the size of the Glock-17 (29 units). The shutter consists of a casing and a larva mounted in the breech of the casing with the aid of a rear sight with a dovetail-type spike fastening. The shutter is guided by a frame coupling with knife projections on the outer surface.

The barrel is installed in the hole of the frame coupling by means of thermal diffusion welding in order to form a non-separable structure to prevent abnormal replacement during operation. The safe exit of the spent cartridge case is 3,83 mm.

As a structural material, it is proposed to use stainless steel with molding of parts under pressure into investment molds (according to the type of production technology of ChZ pistols). With subsequent machining, rotary forging of the barrel, electrochemical polishing of contact surfaces, shot blasting (matting) of visible surfaces, as well as finishing oxycarbonitration of all parts.

The weight of an all-metal pistol without a magazine is estimated at around 700 grams due to the compact design, low weight of the bolt and deep grooves of the surface of the frame and bolt (average thickness of 2 mm) by corrugating the handle, molding the side rails of the frame and notching the bolt casing for manual reloading.

The proposed pistol uses only double-acting striker trigger without preliminary cocking of the mainspring.

The release button is installed in a seat in the front wall of the handle and moves only in the longitudinal direction.

The trigger rod on one side is pivotally connected to the key, and on the other side - to the protrusion of the drummer. With its end, the thrust contacts the frame guide so that when moving backwards, the thrust decreases and comes out of engagement with the protrusion of the striker. After firing and releasing the press from the release button, the associated thrust is returned to its original position under the action of the return spring. As the latter, one of the feathers of a two-leaf leaf spring, located inside the butt plate of the handle, is used. The other feather serves as a return spring for the slide stop.

The profile of the coils of the mainspring in relation to the axis of the striker is oriented axially (which provides it with a small working stroke with minimal preliminary compression). The profile of the bounce spring coils is radial. The mainspring rests on the inner surface of the butt plate of the bolt head, the baffle spring - on the inner surface of the shutter mirror. When the trigger is pressed, the striker shank extends 8 mm beyond the longitudinal dimension of the pistol through the corresponding hole in the end face of the bolt head.

The striking part of the trigger is non-separable during operation (similar to the "Tiger" carbine) - the head and tail parts of the striker with the springs mounted on them are connected by means of a temperature tension directly in the cavity of the bolt larva. Dismantling of the resulting connection is carried out in a weapons workshop using multidirectional heating / cooling of parts.

Cleaning the striker part from powder carbon deposits during operation is carried out using a soap solution, aviation kerosene or specialized cleaning agents.

As the inertial blocker of the striker, a bouncing spring is used, wound from a rectangular plate with a large ratio of width to thickness (2x0,5 mm). In the unloaded state, the coils of the spring are located normally to the surface of the striker. In the case of shock loading from the side of the pistol barrel, the turns take a position at an acute angle to the surface of the striker, blocking its movement due to the increase in the stiffness of the spring. When the shock load ceases, the turns return to their original position.

As an inertial blocker of the release button, a lightweight U-shaped one-shoulder lever is used, located inside the button and resting on a helical torsion spring. When struck from the side of the butt plate of the pistol, the lever is deflected up to the stop in the magazine, blocking the inertial movement of the key and the associated trigger rod. After the shock load has ceased, the lever is returned to its original position by the torsion spring.

The presented concept of a free-action pistol is characterized by increased firing accuracy.

Can be used as a concealed carry weapon. Half the complexity of the design compared to the known models.

Safe to use without using a manual safety device.