Why Russia in 1921 gave part of its lands to Poland 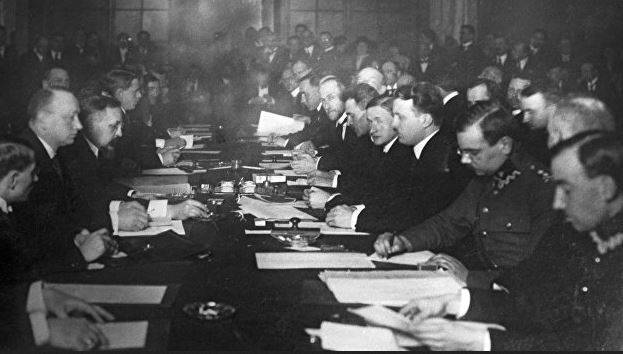 March marks one hundred years since the peace treaty between the RSFSR and Poland was concluded, which put an end to the Soviet-Polish war of 1919-1921. By analogy with the "obscene" Peace of Brest, the Peace of Riga can be called "shameful", since, according to the terms of the peace, the Soviet side ceded to Poland a significant part of the West Ukrainian and West Belarusian lands that were previously part of the Russian Empire, and had to pay the former vassal significant reparations.

Failures of the Bolsheviks at the front

Naturally, the question arises - why did the Soviet government, after impressive victories in the Civil War and over the interventionists, so gave up before Poland, its protectorate of the empire, annexed in the 18th century by Catherine II?

As a result of the defeat of Germany in November 1918, the independence of Poland was proclaimed, led by Pilsudski, who announced the restoration of the Commonwealth within the borders of 1772 and began to take steps to implement this plan, taking advantage of the weakening of Germany and Russia. The question immediately arose about the recognized borders of Poland, which led to the Soviet-Polish war.

British Foreign Minister Lord George Curzon suggested that the parties withdraw their troops along the Grodno - Brest - Przemysl ("Curzon Line") line and establish a border there, roughly corresponding to the borders of ethnic Poles. The outbreak of the war went on with varying success, and, after the defeat of the Soviet troops of Marshal Tukhachevsky in August 1920 near Warsaw, the Poles went on the offensive in August and by October captured Minsk, Bialystok, Baranovichi, Lutsk, Rovno and Tarnopol, forcing the Soviet government to begin peace negotiations (RSFSR together with Ukraine and Poland on the other side). They began in Minsk on 17 August 1920 and continued in September in Riga against the backdrop of the Polish offensive in Volhynia and Belarus. As a result of negotiations, an armistice agreement was signed on October 12, and hostilities at the front ceased.

During the negotiations, the Poles carefully formulated their territorial claims. On the one hand, they proceeded from the possibility of maximizing the return of their lands inhabited by ethnic Poles, on the other hand, they were rather cautious about the annexation of lands with a predominance of the non-Polish population, moreover, they had to take into account the position of the Entente, which sought to limit the too serious strengthening and revival Poland.

At the beginning of the negotiations, when the Poles were advancing, the Bolsheviks offered them to recognize the independence of Belarus and hold a referendum in Galicia, the Poles rejected it. Then the head of the Soviet delegation Ioffe proposed to give the Poles all of Belarus in exchange for weakening the Polish demands on Ukraine, the Poles did not agree with this, that is, Belarus acted as a subject of bargaining between the parties in the negotiation process.

In September, the Polish delegation announced that it was ready to agree to the creation of "buffer" states, including Belarus, on its eastern borders, or to draw the border considerably east of the "Curzon Line". The Bolsheviks accepted the second option, and the parties agreed not to consider the "Curzon Line" as a future border between states.

The Polish delegation was surprised by the pliability of the Soviet side, and they could put forward even greater territorial claims, and the Bolsheviks, most likely, would satisfy them. But the Poles, contrary to the position of their radicals led by Pilsudski, who demanded the maximum increase in territory, understood the danger of such an acquisition. They understood that these lands were inhabited ethnically, culturally and religiously by a different population, for example, in Volyn, Poles accounted for less than 10% of the population, and the inclusion of these territories in Poland could lead to far-reaching consequences and problems. In addition, the prevailing opinion in Poland was that the Bolsheviks would not last long, and the returned supporters of the "one and indivisible" would demand the return of the seized territories, and this could lead to territorial conflicts.

The problems of the Bolsheviks

The Bolsheviks sought to conclude an agreement as soon as possible and were ready to make any territorial concessions, since they urgently needed to solve the aggravated problems of building the Soviet state and complete the defeat of the White Guard armies.

Wrangel's army was still in the Crimea and threatened to enter the vast Tauride steppes, it was finished only in mid-November 1920. Wrangel decided to enter into an alliance with Pilsudski, who has the most powerful army in Eastern Europe, opened his office in Warsaw and began to form the 3rd Russian Army under the leadership of Boris Savinkov with the aim of creating a "Slavic front" against the Bolsheviks. In this regard, Lenin later made an important statement that

The Bolsheviks had a lot of problems with the peasantry because of the policy of war communism and requisitions in the form of surplus appropriation. Throughout the country there were mass peasant uprisings of the "green", workers were on strike in the cities due to lack of food and poor provision, unrest in the army was brewing, which resulted in the Kronstadt mutiny in March 1921. Due to the policy of war communism and crop failure in 1920, famine was brewing, and the Bolsheviks had to by any means save most of the territory of Ukraine with its fertile lands; the loss of Ukraine could turn out to be a disaster for the Bolsheviks.

The Bolsheviks needed a respite to solve the accumulated burning problems, their power could fall at any moment. In this regard, Lenin instructed Ioffe about the need to conclude peace by means of serious territorial concessions, peace was vital for the Bolsheviks.

Peace was also wanted in Poland: under pressure from the Entente countries, the deputies of the Polish Sejm called on the Polish government to sign a peace treaty as soon as possible, and the “chief” of the Polish state, Pilsudski, supported it, stressing that the lands that had gone to the Bolsheviks could be returned in the future.

The most serious disagreements arose over the article of the treaty on the refusal to support forces hostile to each other. The Bolsheviks demanded that their most notorious opponents, such as Savinkov and Petliura, be expelled from Poland, and Poland put forward a condition for the release of all Polish prisoners and the transfer of gold to her as indemnities. In the peace treaty, these requirements were taken into account, and in October 1921, the RSFSR transferred the first part of the gold provided for in the treaty, and the Poles expelled persons objectionable to the Bolsheviks.

Long negotiations after serious and humiliating concessions from the Bolsheviks ended with the signing of the Riga Peace Treaty on March 18, 1921, according to which Grodno and part of the Minsk provinces, as well as Galicia and Western Volyn, were transferred to Poland, and the border ran much east of the "Curzon Line". Poland was given a territory of about three thousand square kilometers with a population of almost 14 million people, the overwhelming majority of which were Belarusians and Ukrainians.

In addition, Russia was humiliated by rather onerous reparations. Poland demanded the return of all historical and cultural values, payments for contributions to the economy of the Russian Empire 300 million gold rubles and two thousand steam locomotives. Under the agreement, Russia pledged to transfer to Poland all cultural and historical values, as well as war trophies exported from the Polish-Lithuanian Commonwealth since 1772, including war trophies, libraries and art collections, archives of authorities and public organizations, documents and maps, scientific laboratories and instruments, up to bells and objects of worship. All Polish capital and deposits in Russian banks were to be returned, while all debt obligations of tsarist times were withdrawn from Poland.

In addition, Russia had to pay Poland 30 million gold rubles within a year and transfer property in the amount of 18 million gold rubles (300 European gauge steam locomotives, 435 passenger cars and 8 freight cars). Russia fulfilled all the requirements imposed on it, the transfer of the main part of cultural property ended in an agreement in November 100.

In accordance with the treaty, Poland was to grant the linguistic and cultural rights of national minorities to the Ukrainian and Belarusian populations on its territory. Despite this, a policy of polonization began on the annexed lands, with the prohibition of the use of the Ukrainian and Belarusian languages ​​in all state institutions, the general closure of the media and persecution of the Orthodox faith.

After the treaty came into force, the Polish government, despite the protests of the Soviet side, was in no hurry to fulfill the terms of the treaty: it did not stop supporting anti-Soviet groups on its territory and sabotaged the return of Red Army prisoners of war, keeping them in appalling conditions. It should be noted that in accordance with paragraph 2 of Article 10 of the agreement, the parties waived claims for

"Misdemeanors against the rules binding on prisoners of war, civilian internees and, in general, citizens of the opposing side."

The conclusion of the Riga Treaty marked the end of the Civil War, secured the western border from invasion and gave a respite to start the transition from the policy of war communism to the new economic policy, adopted at the 10th Congress of the All-Union Communist Party of Bolsheviks on March 16, 1921, just on the eve of the conclusion of the Riga Treaty. This respite came at too high a cost - territorial concessions, large reparations and the death of tens of thousands of captured Red Army soldiers. The correction of the negative consequences of this "shameful" peace was carried out by Stalin in 1939, returning the seized lands and reuniting the Ukrainian and Belarusian peoples.