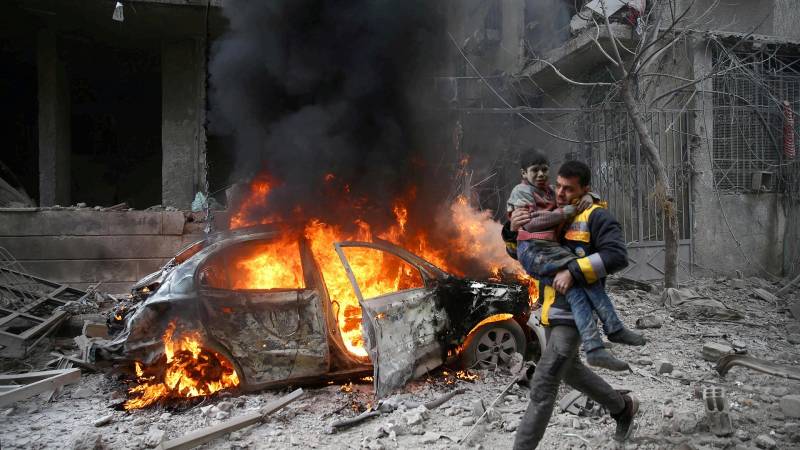 How do they teach historical discipline, each event must have its own reasons. The Syrian war, which celebrated its 15th anniversary on March 10, was predetermined by several factors. One of them was the long-term drought, which affected about 60% of the Syrian territory. According to climatologists, the magnitude of the 2006-2011 drought was unprecedented in the region. It is not known how much global warming can be blamed for this, but the natural disaster has entailed a lot of consequences. In 2011, in the northeastern regions, pastoralists lost up to 85% of the livestock - to one degree or another, this affected almost 800 thousand people. People with no means of livelihood set out to seek a better life in cities - primarily Damascus and Aleppo. In addition to this, refugees from Iraq have settled in the cities of Syria. All this seriously raised the degree of tension, which could not become one of the reasons for dissatisfaction with the authorities.

Ten years ago, the Assad regime was a very controversial state institution. On the one hand, the standard of living was higher than in Egypt and Tunisia - in 2010, per capita GDP reached $ 4,8 thousand. Each year, GDP grew by 2-2,3% (comparable to Israel and Kuwait), and the unemployment rate ranged from 20 to 30%. For comparison: in Tunisia, unemployment among citizens under the age of 30 reached 50%. And 20% of the unemployed at the same time were in quite prosperous Spain. Education was not bad either. Literate citizens over 15 years old were 86% among men and 73% among women. On the other hand, Bashar al-Assad pursued a poorly thought-out domestic policy. From 1963 to 2011, a state of emergency was in force in Syria, prohibiting political actions and rallies. Frightened by the prospect of violent coups in neighboring Arab countries, the government has also severely curtailed free speech on the Internet. When buying a SIM card, not only a passport, but also the owner's fingerprints were required. The owners of the Internet cafes were obliged to keep the entire history of browsers and detailed customer data. The military intelligence of Syria, or Mukhabarat, kept almost every citizen under control. 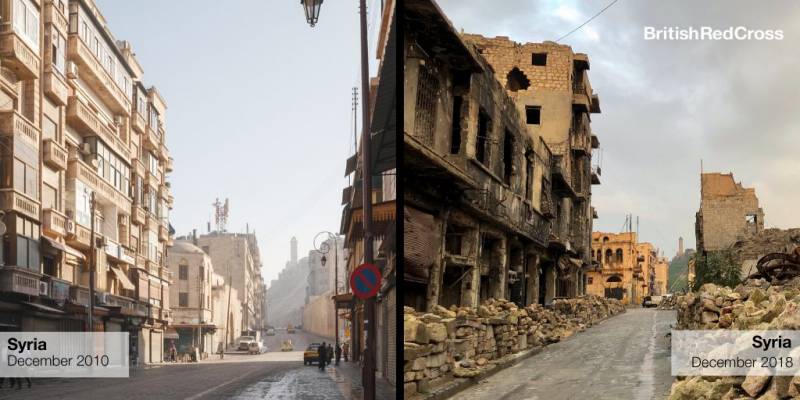 Source: pbs.twimg.com
Another reason for the dissatisfaction of part of the population was the Alawite minority, which occupied almost all government posts in Syria. For half a century of power, the levers of governing the country have fallen into the hands of a few clans, often linked by corruption schemes and abuses. At the same time, Bashar al-Assad was wary of allowing the Sunni majority (up to 75% of the population) to come to power. At the time of the outbreak of unrest, Assad did not even want to think about liberal reforms. In the early 2000s, the young leader of the country already had a negative experience of liberalizing the economy and public life, known as the "Syrian Spring." However, attempts to stimulate the market economy led to the acceleration of inflation, stratification of society and an increase in unemployment. Under the conditions of liberalization, the intelligentsia demanded new democratic freedoms, and previously banned parties and associations, such as the Muslim Brotherhood, the National Renaissance Party and the Syrian Reform Party, became active abroad. They demanded free elections and changes in the Syrian constitution. Assad judged that the further development of the "Syrian spring" is more expensive for himself and turned away from sin much of the liberal reforms.

All this spectrum of problems and factors eventually led to the first massive anti-government protest on March 15, 2011. About two hundred protesters, despite the ban on rallies, demanded the resignation of Bashar al-Assad and political reforms. The further fate of the national leader was unambiguously hinted at by the rebels' graffiti “Your turn, doctor”. An ophthalmologist by training, Assad was supposed to join the list of the disgraced leaders of Tunisia and Egypt, and in extreme cases repeat the outcome of Muammar Gaddafi. As history shows, the protesters did not have enough for a decade.

At first, Damascus feared tough measures against the rebels. Largely because of the hope for a peaceful settlement, as well as fear of teasing NATO, which recently famously cracked down on the Libyan leader. And in response to the demands of the streets, concessions were made. On March 29, 2011, the Syrian government was dismissed. On April 20, the state of emergency was lifted, that is, the protesters were officially allowed to hold rallies. The Kurds were given Syrian citizenship (before that they were "foreigners"), and everyone else was promised liberal reforms.

But on April 21, General Abo al-Tellawi with two sons was killed in Homs. The disfigured corpses were cut into pieces. The same fate befell General Iyad Harfush and his three children. For some reason, the liberal West turned a deaf ear to this blatant terrorist act. Instead, in early May, the first European sanctions were introduced against Damascus, targeting those involved in the suppression of the protest. Throughout the country, the protest movement was gaining strength, the authorities did not have time to stop it, and on both sides weapon... Over time, the police forces ceased to cope, the regular army had to intervene, and a full-fledged civil war broke out in Syria.

By July 2011, the notorious Syrian Free Army appeared, receiving weapons both from military warehouses in the country and through foreign supply channels. Subsequently, the war was aggravated by foreign intervention and led to a large-scale humanitarian catastrophe. Officially, Assad recruited Lebanese Hezbollah, the Iranian Islamic Revolutionary Guard Corps, pro-Iranian militants from Yemen, the Mahdi Army from Iraq, and the Popular Front for the Liberation of Palestine to suppress the irreconcilable opposition. This did not help much - in 2013, only one fifth of the territory was under the control of Damascus. Russia was able to turn the tide, but the United States and Turkey got involved in pulling Syria apart piece by piece. As a result, it is now an international conflict with non-zero prospects for a transition to a global crisis.

For various reasons, the war claimed up to half a million lives of the Syrians. The UN estimated that 5,6 million people left the country during the war, and another 6,6 million became refugees inside Syria. Of the 18 million population, 13,6 million are in need of humanitarian assistance, and 90% live below the poverty line. The Syrian government estimates that it will take up to $ 400 billion to rebuild the devastated country. Where to get at least part of the amount, there is no clarity. Particular difficulties brought the Syrians in 2020 "covid" year and the economic crisis in neighboring Lebanon, with which Syria traditionally has close economic ties. The national currency has depreciated rapidly, and now the average salary of a Syrian of $ 24 is not enough for the minimum monthly grocery package. Western accountants have calculated that the average Syrian needs at least $ 300 a month to live a decent life. That is, there is a multiple discrepancy between opportunities and needs. 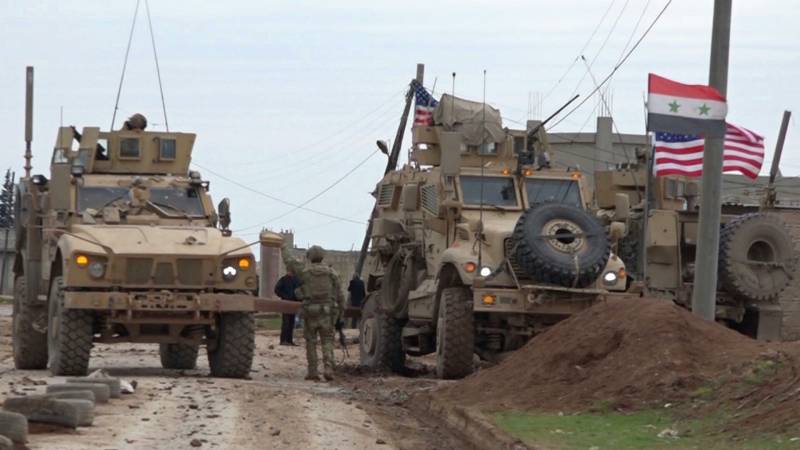 Source: ria.ru
Bashar al-Assad himself also needs help, completely dependent on the will of several states - Russia, Iran, Turkey and the United States. Official Damascus does not control up to 85% of Syria's land border. The country is divided into four parts: the northwest is ruled by rebels with ties to Turkey; in the northeast, on the left bank of the Euphrates, lands under the control of the Kurds; militants "Mugavir al-Saura" and, finally, the center of Syria with the southwestern part under the jurisdiction of Damascus are based around the US-occupied Al-Tanf. It is worth noting that most of the oil-bearing provinces are under the control of either the Kurds or the Americans. Yes, and the liberated territory is controlled by Assad very conditionally - in the desert areas, the ISIS and the like, banned in the Russian Federation, have not yet been completely destroyed.

Despite the absence of full-scale hostilities in Syria, it is still too early to talk about the end of the ten-year war - daily reports on local clashes confirm this. In the north of Syria, the Idlib hot spot is constantly smoldering, and the terrorists who have not been killed in the east are ready to take advantage of the weakness of any of the players in the conflict and provoke a new exacerbation.

The views on the further post-war future of Syria naturally differ between Russia and the Western countries. Assad's opponents predict decades of devastation or freezing of the current state of the country. The opposition Syria Report writes in this regard from Beirut:

"The outlook for Syria is bleak, the economic situation is getting worse, it is unlikely that anything will change at the international level, and only international players can decide something."

The West regards Russia as a winner in Syria, but further prospects in the region are seen as vague. To what extent will Assad be obedient? Will he remain loyal when the Gulf oil monarchs are more sympathetic to him? Or when the Arab League softens and returns Syria, expelled in 2011, into its ranks? Meanwhile, Russia has high hopes for a new constitution and elections due in May-June of this year. They promise to hold the vote as open as possible, but now the EU plans to declare the elections illegitimate in advance. A new round of Syrian uncertainty is getting closer.

Ctrl Enter
Noticed oshЫbku Highlight text and press. Ctrl + Enter
We are
Bashar al-Assad: In Syria, not the “revolution” that the enemies are talking about, but the revolution of the army and the people against terroristsSyria: Americans scare themselves, and Asma Asad buys chairs
Military Reviewin Yandex News
Military Reviewin Google News
63 comments
Information
Dear reader, to leave comments on the publication, you must sign in.