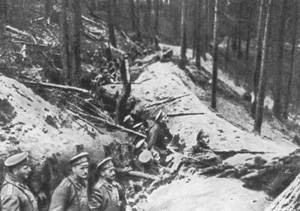 There was a kind of symbolic act, which drew a line under the First World War - the Federal Republic of Germany transferred the last tranche to 70 million dollars in repayment of reparations, established by the Versailles agreements. And in this regard, it makes sense, as it seems, to recall this war - rightly or not, but called in pre-revolutionary Russia - Second Patriotic.

In the telephone conversation with the author of this essay, the defense attache of the embassy of the Slovak Republic in Ukraine, Colonel Juraj Beskid will note that he does not know anything about the last battle in July 1917 of the Russian Guards regiments - allies of the Czechoslovak brigade. But in July, the Allies fought literally near. The colonel often visits the magnificent memorial to the dead Czechoslovak legionnaires, opened in 1927 in the Ternopil region. Legionnaires fought for the liberation of their native land from the Austro-Hungarian enslavement. But the diplomat did not know about the hundreds of Russian soldiers who were buried and buried almost next to this memorial of the Russian Guards. Therefore, he listened to me very carefully and thanked sincerely for the valuable information. He promised to coordinate with the Attaché of the Czech Republic the issue of possible joint commemorative events at the burial site of the Russian Guards. I recalled that the Russian graves are abandoned and nameless. I hope that the next time they visit the memorial, the Czechs and Slovaks will visit the village of Mszana.

2 / 15 July 1917, an infantry brigade of Czechoslovak legionnaires (3,5 thousand) fought heroically from the Ukrainian village of Kalinovka, Zborovsky district of the Ternopil region in an unequal battle with the enemy (12,5 thousand). . 4 legionnaires died in battle and 190 were injured. This event is publicly celebrated in the Czech Republic and Slovakia. And not far from Kalinovka there is the village of Mszana. This is the site of the last and heroic battle of the Russian Guard before its disappearance, as well as the entire Russian army. Two months later, the Bolsheviks seized power. Why Russian representatives do not visit the village of Mszana? Why should the Russians not install there a memorial sign about the last heroic battle of the Petrovsky brigade? It is likely and more. A memorial sign will be erected on the burial site of the Russian Guards on behalf of the governments of the Czech Republic and Slovakia.

This village five days after the battle of the Czechoslovak brigade had another battle. The Russian Petrovsky brigade as part of the Preobrazhensky Life Guards and the Semenov Life Guards Regiments, the first regiments of the regular Russian army, bravely repulsed the attacks of superior enemy forces for two days. During World War I, hundreds of thousands of our soldiers and officers died in Galicia. Their graves are almost not preserved. During the battle, 1300 Russian soldiers and officers were killed near the village of Mszana. The difficult circumstances of this battle did not allow the guards to bury all the dead comrades themselves. For them, it makes the enemy. After the battle, dozens of Orthodox crosses fill the surrounding land. On the banner of the Transfiguration of the regiment the inscription "Kulm 1813 year." The name of the German city, where the Russians and their Prussian allies won a brilliant victory over Napoleon's troops. Out of respect for the courage of the Russian Guards in the battle of Mshanami and in commemoration of the victory at Kulm, the German command ordered to arrange the burial of Russian soldiers. Today, crosses and graves are not preserved. Occasionally, there are some overgrown with weeds hillocks at the burial site of our compatriots. Near the church in the village cemetery you can find a mass grave, where in 2008 a memorial plate was installed with information about the five officers of the Preobrazhensky regiment who were buried here. Through the efforts of the members of the Ukrainian society “The Last Soldier” and with the help of their Moscow associates from the archives and other sources, names were established. dead officers:

(According to one convincing version, captain Andrei Kondratenko is the son of General Kondratenko Roman Isidorovich, the hero of the defense of Port Arthur.)

Two days after the slab was installed on the grave, in the Lviv edition of the nationalist party Svoboda, it was reported that in the village of Mszana “an unheard-of история, the grave of sichovyh archers is confounded by "Great Russian" chauvinism. " The nationalists were outraged that when setting up the slab on which the “imperial symbols” were on, there was a Russian consul from Lviv and “some type in the form of the tsarist army, and another with the St. George ribbon on his chest, and the orchestra of the local artillery unit played the march of the Preobrazhensky regiment ". In the text of the march there are words that are especially hated by nationalist Russophobes; the Battle of Poltava and Catherine the Great are mentioned there.

For many years this mass grave was called the grave of “five unknowns”, although in the publications of Russian émigrés it was written that this was the grave of officers of the Preobrazhensky regiment. In 1920, soldiers of the army of the so-called “Western Ukrainian People’s Republic”, who fought with the Poles, were buried in this cemetery. Two militants of the Ukrainian Insurgent Army, who fought against Soviet power, were secretly buried near the church. Representatives of the Freedom Party, which won the local elections, demand that the commemorative slab be removed. Here and through 90 years here, as it were, a new battle continues. At this time, for the preservation of the memory of the dead Russian Guardsmen. In the area there is no temple of the canonical Ukrainian Orthodox Church of the Moscow Patriarchate. Therefore, there is no heard here of the requiem service over the grave with the mention of the Russian land.

The village of Kalinovka actually laid the foundation of the Czech and Slovak armies. “We bow our heads before their feat and their memory, because they fought for the best life of all Slavic peoples, and the pantheon of Slovak and Czech soldiers in the village of Kalinovka is a symbol of the unity of the Slavic peoples”, this can be heard more than once from official representatives of the Czech Republic and Slovakia. “Despite the fact that the battle was of local importance, for the Czech people it was a key moment. Thanks to this battle, the world learned about the Czechoslovak part fighting with Austria-Hungary for an independent Czechoslovak state. ” So say the first president of Czechoslovakia Tomas Masaryk. “Kalinovka is the Rubicon of our foreign liberation movement,” the Minister of Defense of the Czech Republic will note when laying wreaths at the monument on the 90 anniversary of the battle near Kalinovka.

FIGHT OF THE CHEKHOSLOVAK BRIGADA

In the battle of Kalinovka, Karel Washatko (1882 – 1919), a non-commissioned officer who became an officer, fought bravely. Karel was a champion in obtaining combat awards. He became a full George Knight (4 soldier’s cross), received officer George 4 degree, Order of Stanislav with swords, St. George weapon and two St. George medals. Here the regimental clerk fought, Jaroslav Hasek - the future writer. In battle, he, the staff clerk, had to become a machine gunner. Future General Ludwig Svoboda also fought here. Saving their families in the Czech Republic and Slovakia from repression, many legionaries put grenades under their heads so that the corpses could not be identified. On the shoulder straps of the regiment of Jan Hus they sewed a “Hussite red bowl” - a symbol of the liberation struggle. Russian soldiers called this sign "glass". In this battle, a massive transfer of soldiers of the Austrian army — the Czechs to the side of the Russian army — was noticed. They saw on the brigade banner a familiar image of the “Hussite cup” to every Czech. In one defector, the legionary recognized his son. Legionnaires went on the attack not by a loose system, but by separate maneuverable groups, hiding in uneven terrain. The enemy called this tactic “feline”. And it brought success ...

At the end of June 1917, the offensive of the troops of the Russian South-Western Front began in the area of ​​the city of Ternopil. In the beginning was success and progress. They took two cities, many prisoners and trophies. This was facilitated by the tangible advantage of the Russian troops in numerical strength and in artillery. Our artillery already responded to one enemy gunfire with 2 – 3 shots, including from heavy guns. However, the offensive soon ceased. And the enemy skillfully counterattacked in the place where they were completely incapable parts.

“... On the South-Western Front, at the slightest shelling of artillery, our troops, having forgotten the debt and the oath before their homeland, left their positions. On the whole front, only in the Ternopil area, the Preobrazhensky and Semenovsky regiments are doing their duty. ”The Supreme Command of the Russian Army reported with cold despair. As a result, the summer offensive of 1917, in Galicia, ended in a heavy defeat and retreat. The main reason is the transformation of the Russian army into the "freest in the world" by Kerensky. When officers and even generals entered, the lower ranks often did not get up and called the commanders "bourgeois". And here is a concrete historical fact. The “revolutionary” soldiers of the neighboring regiments, passing the front to the Czechs and Slovaks, tried to make machine guns unusable, and the cartridges and grenades were simply buried. And when the Czechoslovak brigade moved to the attack, the duffel bags left by the Czechs and Slovaks in the trenches were stolen. ”

The Czechoslovak and Petrovskaya brigades, with the general collapse of the front, became one of the monolithic and combat-ready units of the Russian army. To stop the breakthrough of the Austro-German forces under Ternopil and prevent the capture of front-line heavy artillery and huge stocks of military equipment and ammunition, the command sent the Petrovskaya and Czechoslovak brigades here. Kerensky sent a telegram with these words: "Let the Petrovskaya brigade again cover itself with glory and crown its gray banners with new victorious laurels." The brigade officers were outraged by a telegram from the main destroyer of the Russian army, but they did their duty to their homeland. The Peter Brigade kept the 48 clock defense ... Historical justice requires that a memorial obelisk in honor of our courageous compatriots - the guardsmen of the Petrovskaya brigade was installed at the site of their last battle!