Exercises on the Black Sea for Ukrainian and other kamikazes 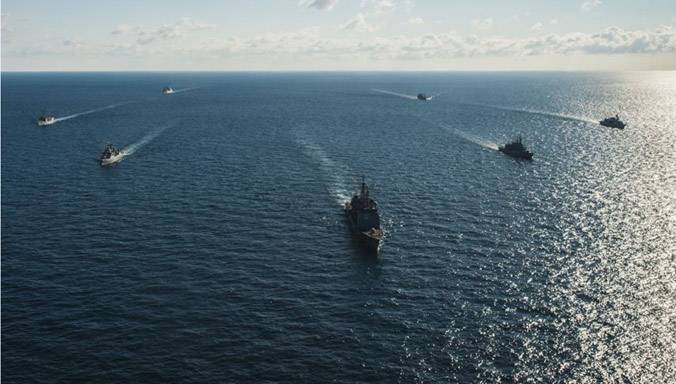 Quite often they write to me that Russia pays little attention to training the personnel of units and subunits located in the Crimea and on the Black Sea coast, repelling a possible attack, and establishing control over the Black Sea during a special period. And so on in the same vein.

Moreover, it is strange, but for some reason Russian readers consider live firing or the deployment of some complexes, the landing of troops and similar events of the Russian army to be the usual work of the military. And any actions of the countries of the alliance with a loud English name are perceived as global teachings of the whole of Europe.

The latest example is a NATO naval exercise involving Ukraine, Turkey, Spain and Romania. These exercises are of the PASSEX type, which were conducted according to the standards of the North Atlantic bloc quite recently - at the beginning of March. When ships of foreign countries entered the port of Odessa on March 10. Moreover, this is the second such exercise with the participation of Ukraine. The first ones took place in early February. Only then did the Ukrainians study together with the US Navy.

The magic of the English acronym

Seafarers, especially those who have served or have served more recently, understand what a PASSEX-type exercise is. For the rest of the readers, I will explain. Such exercises on land are called combat coordination. It's just that instead of ground units of different types of troops or different countries, ships of different states or fleets are used.

Simply put, this is a test of crews and ships for their ability to effectively interact when solving any combat missions. And the name itself was invented by our overseas partners, the US Navy. Thus, any joint actions of even two ships or boats of different fleets fall under the teachings of this type.

Although, in my opinion, Ukraine is no longer worthy of the loud name "fleet". Rather it is flotilla... By the number of available floating facilities.

The Americans are now actively looking for options to strengthen their influence in the Black Sea. Those who grew up in the USSR remember the thesis that the Black Sea region was called the underbelly of Russia. It is from here that you can quickly and effectively reach the steppe expanses and, without any problems, launch an offensive against Moscow and the Central Region of our country. The terrain allows it.

Theoretically, NATO already has enough forces and means to put pressure on Russia. Even fulfilling the conditions of the Montreux Convention on the status of the Bosporus and Dardanelles, the alliance has enough forces and means to cope with such pressure. I mean the fleet of Turkey, a member of the NATO bloc. Only here Erdogan is not very keen to expose his ships to Russian missiles.

Why are they escalating the situation in the Black Sea

Indeed, why is NATO aggravating the situation?

Isn't it easier to just finance the fleet of the Turkish Republic, strengthen it with modern ships, create a powerful coastal grouping, modernize ports, etc.?

Or, on the contrary, to spit on the Black Sea and put pressure on Russia in the Baltic, where the Americans are at ease, where most states are ready to do whatever the United States demands.

The "pincers" that NATO is now trying to strengthen on Russia's western maritime borders have not yet been created. The northern direction is more or less controlled. And the actions of the Russian fleet can be stopped there. Except, probably, the submarine fleet of the Northern Fleet of the Russian Navy.

But the southern one has collapsed since the collapse of the USSR. Largely simply because of what happened in Ukraine in 2014. As long as Crimea was Ukrainian, there were restrictions on the Russian fleet and ground forces. Now they are gone. Therefore, Russia has strengthened its military grouping on the peninsula quite seriously. And not only the fleet, but also the coast guard, air defense and missile defense, aviation and other units.

Meanwhile, for southern Europe (for the Mediterranean region), the presence of the Russian Navy is extremely dangerous. NATO's southern borders are practically unprotected. The hope that Turkey will be able to close the straits for Russian ships during a special period is rather illusory. This is understood in the alliance, in Ankara and in all the Black Sea countries.

Naturally, in this case, in a special period, American ships must have time to enter the Black Sea. That is, the straits must be closed by NATO troops.

Is it possible to carry out this task by the troops of the alliance at the present time?

So, will NATO troops be able to take control of the straits and deprive Russian ships of the ability to enter the Mediterranean?

Does the bloc have enough forces to destroy the grouping in Crimea or completely neutralize it, at least for the duration of the tasks of capturing the straits?

The existing plans of operations to seize the straits have been known for a long time.

Blocking the Black Sea Fleet in ports and bringing in NATO ground forces to guard the straits. This is short. It is clear that the main role here should be played by the Turkish fleet and assistance from US ships and aircraft. The valiant sailors of other Black Sea countries will act "in the wings." Take it, bring it, stay here.

But in the changed situation, these plans are practically impracticable.

Already today, the Black Sea is almost completely controlled by Russian coastal defense assets. Any ship, regardless of nationality, can be destroyed as soon as it leaves the port. And aviation will not be able to provide special assistance due to the serious Russian air defense.

The only thing left for the Americans is to link the Russian units and formations by fighting with their allies. In practice, this means that the task of the United States is to incite those whom it does not feel sorry for against the Russian troops. After all, it is clear that the ships and military units that participate in the attack will be destroyed in a short time. And this time should be enough for the American, more precisely, the NATO army and navy to complete the task of capturing the straits.

The name of the US allies can be different. Good история wars knows many names for those who went to their death.

Well, if people, military men of the Black Sea countries, including Ukrainians, want to sacrifice their soldiers, sailors and officers for the sake of the interests of the United States, this is their choice.

We have never divided enemies into good and bad. They beat everyone in a row. In their graves, no one will disassemble them according to their nationality.

Short conclusion for the future

Exercises, especially at the borders, always arouse a certain interest of the military.

That is why there are reports about the interest of the LDNR in the units of the Armed Forces of Ukraine, prepared for military operations in large settlements. That is why, just these compounds will be destroyed in the first place during the offensive.

The ravens, represented by the ships of the United States and their allies, circle our coast.

Not just circling, but with a loud croak, with a lot of noise. They want to intimidate us with this fuss, flapping of wings and other attributes of crow's tricks.

And these crows behave so brazenly simply because someone assured them that we still have a boy's slingshot in our pocket, and not a hunting rifle.

Ctrl Enter
Noticed oshЫbku Highlight text and press. Ctrl + Enter
We are
Situational analysis of the death of the MH17 flight (Malaysian Boeing 777), made on the basis of engineering analysis from 15.08.2014Results of the week. “In our cooperative, the board is always agreed”
Military Reviewin Yandex News
Military Reviewin Google News
38 comments
Information
Dear reader, to leave comments on the publication, you must sign in.