Rogozin showed the "NATO base" 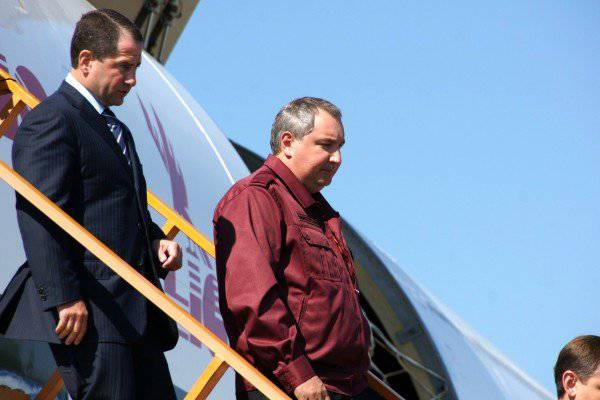 Deputy Prime Minister Dmitry Rogozin arrived in Ulyanovsk to open the second international air transport forum. After the traditional press approach, Rogozin unexpectedly suggested that journalists take a “tour” - look at the “NATO base”, which only the lazy have not spoken about lately. “I want to dot the i's,” the deputy prime minister said.

Not far from the building of the airport "Ulyanovsk - Vostochny" there is a temporary storage warehouse (TSW). Two hangars with the adjacent territory (with a total area of ​​three thousand square meters) are surrounded by a fence with barbed wire. “This is a zone of restricted access to goods. Only certain people on the list have the right to be here. Cargo is stored here before they are cleared for customs, after which they are taken away,” says an employee of the temporary storage warehouse.

Now inside the hangars are packings designed for plants - residents of the nearby industrial zone "Zavolzhye".

- Here is a list of products that are currently in stock. There are Mars chocolates - they strengthen very much in battle, give strength, - the vice prime minister joked. - This is where the very "NATO base" is located, soldiers go, guns stand and Tanks...

In fact, there is no final decision on the arrangement of the "logistics point" (as the potential object Rogozin called it). According to the Deputy Prime Minister, the Russian government has considered this issue several times, postponing the adoption of a final decision. "Including, taking into account the wave that was in society," - says Rogozin. And the wave turned out to be really “noisy” - several protests against the deployment of the “NATO base” took place in Ulyanovsk.

A special group was created under the government of the Russian Federation, headed by Transport Minister Maxim Sokolov. In the near future, perhaps, the Foreign Ministry will reach the final stage of negotiations.

- This is a matter of national security, and therefore a specific scheme has been developed. Transit can only be in the form we have thought it through: with the exclusive participation of only Russian carriers, both air and rail. We must have access to the goods themselves - we must be aware of what is being transported. The appearance of any foreign personnel is unacceptable. We fear getting into drug containers. We have this happened in the Soviet era, when some of the military worked like that in Afghanistan. Therefore, the full right to inspect any goods that will go through our territory is a crucially important point. Perhaps we will use GLONASS to control the movement of each container, Rogozin specified. - By the way, the troops are not only weapon and personnel. It is also the rear - tents, military camps, furniture, food and much more, which I have already joked about several times. At the same time let's see what they had there.

According to the Deputy Prime Minister, NATO transit not only has to bring Russia (and the Ulyanovsk region) a lot of money:

- First of all, we will have information about what is really happening in Afghanistan, in order to understand whether the Americans are really leaving there. It is imperative to realize your national interests. And they are to make the most of Russia's geographic advantages to create aviation, railway and, in the future, automobile corridors. We need to develop our network of roads - air, sea, land, so that the West gets used to transporting goods through us. We will make money that way. The organization of the transit of goods permitted in the Russian Federation is absolutely in our interests.

The “NATO” project, if successfully implemented, according to Rogozin, can become a “business card”, an advertisement for “Ulyanovsk-Vostochny”. A full-fledged hub - interchange and reloading transport hub will be created here. The scheme of the proposed transit is as follows: the plane brings containers; they are unloaded and stored (presumably from three to five days) at the temporary storage warehouse. Then they are loaded onto railway platforms and sent to the Russian port.

- If we make a logistics center, where the three types of transport converge (air, road, rail), we can carry goods from China, from the Far East and so on. This will be a good option for maintaining contacts with the Central Asian republics, Rogozin explained. - We weighed, analyzed and concluded that such a project should be done. And not just to do - for it is still necessary and "fight."

According to the warehouse staff, the Americans were satisfied with the conditions that could be provided to them in Ulyanovsk. If the transit goes, the area of ​​the TSW will increase to ten thousand square meters.