"... There is in my hand the power to harm you; .."
(Genesis 31: 29)
Weapon and firms. Today we will get acquainted with another design by John Browning, and not just a design, but a rifle that has received the nickname "magnificent eight". It is clear that people do not scatter such epithets for nothing, especially in a country where people have always known a lot about weapons and knew how to handle them. Moreover, we will have not one, but two articles on the "Great Eight" topic.

Let's start with the fact that we remember that the material was already published about this rifle on VO in 2016. But a lot of time has passed since then, additional information has appeared, and if so, it makes sense to turn to this topic again and thereby continue our story about companies and their weapons. 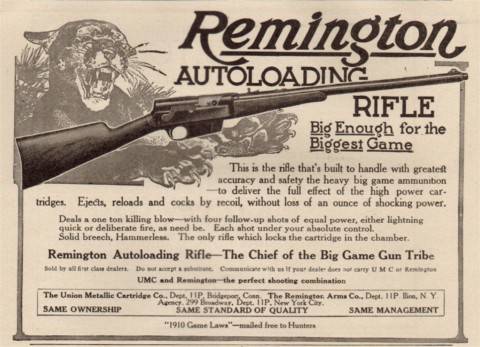 Advertising of the 9-mm self-loading rifle of the "Remington" company
And it so happened that when Browning left for Europe and from there began to sell his guns to the United States, many arms firms thought that ... they had missed a whole segment of the arms market. Moreover, the leaders were again the Colt company with its self-loading rifles М1903 and М1905. The same company "Remington" had something to think about, and they made the right decision: they turned to John Moses Browning. Help, they say, in whatever you can, and Browning really helped them: he offered one of those three versions of his guns, which he had developed even before he left for Belgium.

John Browning's patent application was filed on June 6, 1900, and US patent No. 659 was issued on October 786, 16. And when Browning sold the patent to the Remington Company, they immediately began producing his rifle in 1900. 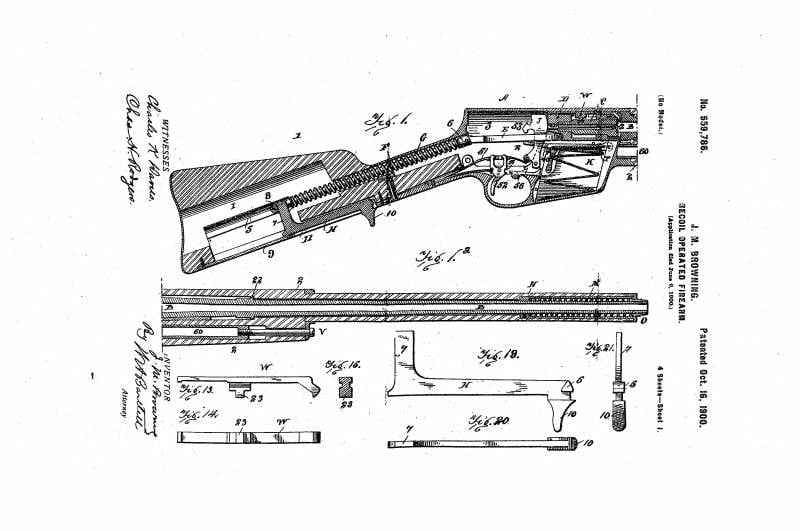 Diagram of a self-loading rifle by J. Browning under a 1900 patent
So the company was able to release its own automatic rifle on the American arms market - the Remington Autoloading Rifle, which in 1911 became known as the Model 8. But if the A-5 was a smoothbore gun, then this sample was a real rifle that fired powerful rifle cartridges with bullets in a hard alloy shirt. Moreover, "Remington" offered its customers (and this was also a very good marketing ploy!) At once four models of rifles for ammunition of different calibers: Remington .25, .30, .32 and .35. The very first fired relatively weak .25 Remington cartridges (6,54 mm caliber), then the power of the cartridges increased, but the last version of the "eight" used the most powerful cartridges .35 Remington (9x48mm Browning). This cartridge was created on the basis of a sleeve from the standard army .30-06 cartridge, but at the same time it had a larger caliber (actually 9,1 mm) and a much heavier bullet. That is, this rifle had more destructive power, and strength ... it is always strength. It is never superfluous! 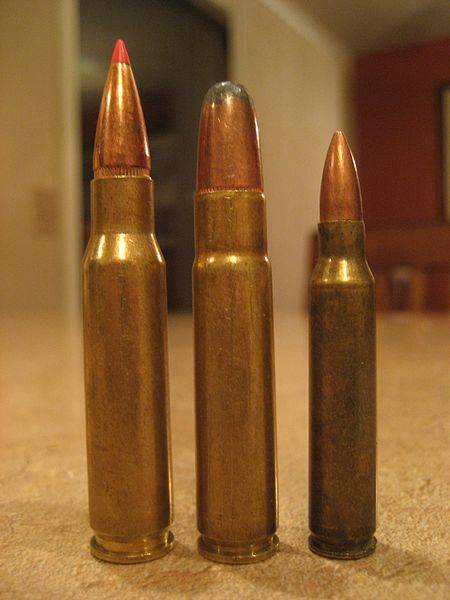 Cartridges for comparison from left to right: .308 Winchester, .35 Remington and .223 Remington
Rifles differed not only in caliber, but also in finish. There were five different rifle finishes in total, from the simple Standard to the most luxurious Premier Grade. Although many mainly differed only in that the quality of the wood and the volume of engraving or notching performed. 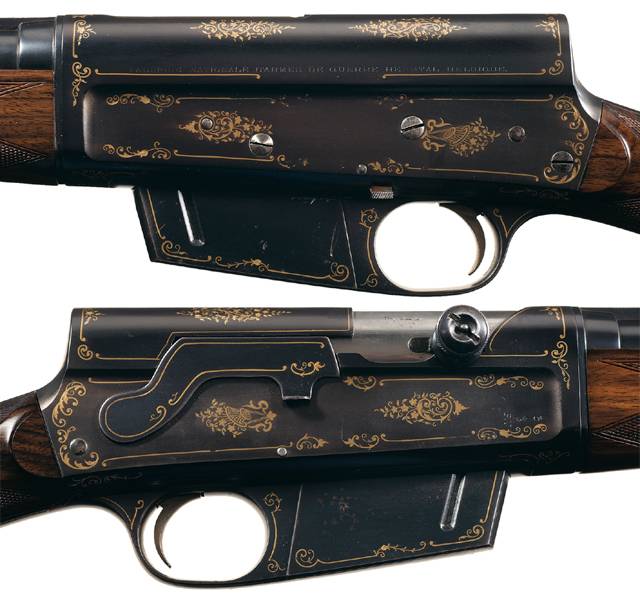 Some rifles were a real work of art and were therefore fabulously expensive. For example, this sample ... Photo courtesy of Cameron Woodall 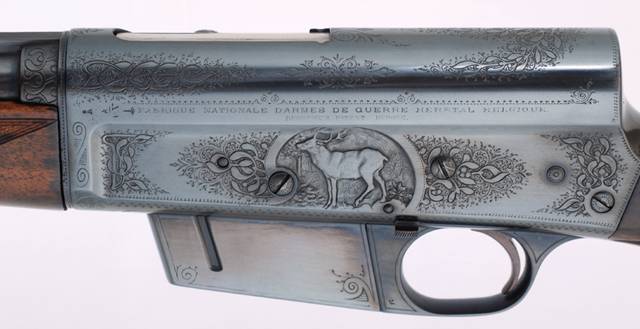 Or this one. Photo courtesy of Cameron Woodall
Interestingly, this rifle was developed by John Moses Browning while he was working on his first semi-automatic rifle, later the Browning Auto-5. Moreover, the new rifle used the same long-stroke recoil system as this one of his rifles.

Loading a rifle with a clip
But the new rifle also had some differences: the barrel with a casing put on it, hiding its return spring put directly on the barrel, a fixed box magazine for five rounds, which could be filled with a clip (for five cartridges of .25, .30,. 32 and four rounds for the .35 caliber). When fired, the barrel moved inside the casing, which, according to many shooters, was more comfortable than the "jumping" barrel of the A-5 gun.

Diagram of the receiver of the M8 rifle from J. Browning's 1911 patent. The device of the barrel casing and the barrel itself with the spring put on it is very clearly visible - Fig. 17, as well as a barrel attachment device - det. 5, 6, 7, 8
Browning created it considering the fact that in those days most people traveled by train, so the size of the weapon mattered. So he made his new 8-pound 41-inch rifle collapsible, making it easier to transport and clean. Disassembling the weapon was extremely simple. First, it was necessary to remove the forend in order to gain access to the built-in barrel key. Then, using the key, the connection was simply unscrewed, the barrel was released, and thus the gun was disassembled into two parts. And since the barrel, including the chamber and the open sight, remained a single whole, this feature in no way affected the accuracy of the shooting. 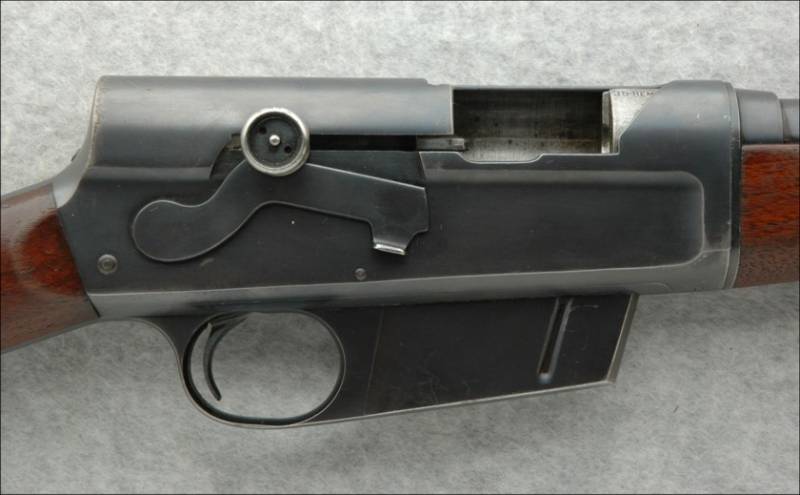 M8. The shutter is open. By the way, pay attention to the characteristic shape of the fuse, which is also the gate opener. Doesn't it look like anything? Photo courtesy of Cameron Woodall
After about 69 M000s were produced, the firm felt that "the old workhorse needed a facelift," and in 8 introduced the 1936 with some minor differences, such as a heavier pistol grip and a more durable forend. In addition, the gun was originally offered in a different caliber range: .81, .30, and .32 Remington. 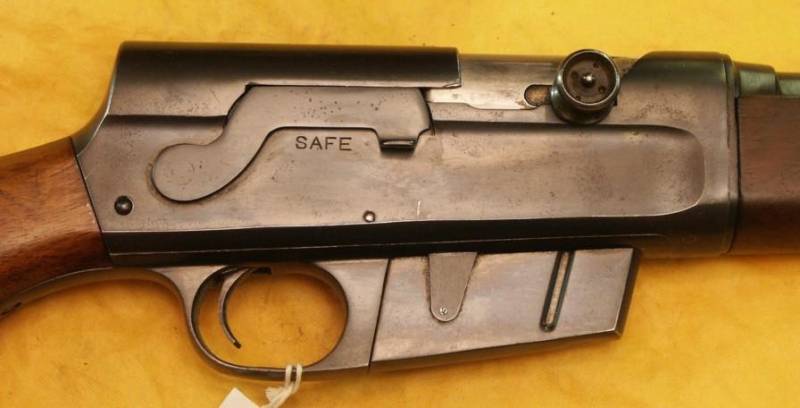 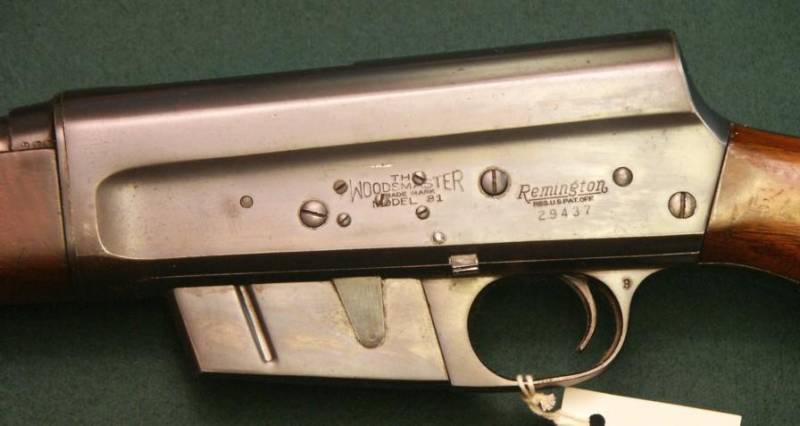 M81. Receiver. Left view. Photo by Alain Daubresse
The .1940 Savage caliber was added to the range in 300, just to make the 81st model even more competitive in the marketplace. At the same time, the rifle, named "Woodmaster", was produced with several design options: "Standard" 81A with a simple butt and forend; 81B Special with selected checkered wood; 81D Peerless with engraving on the receiver and delicate knurling; 81E Expert with even more engraving volume and better cut; and the first-class 81F Premier. The manufacturing technology was also improved and the cost price was reduced. 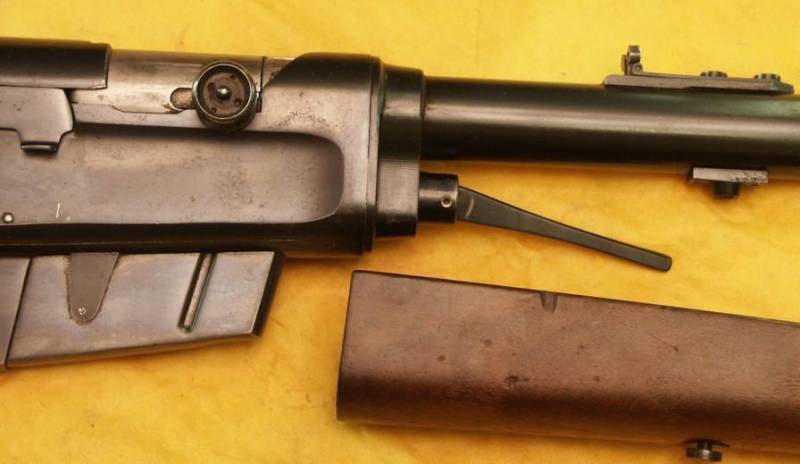 And this is how this rifle was disassembled: first, the forend was removed. Photo by Alain Daubresse 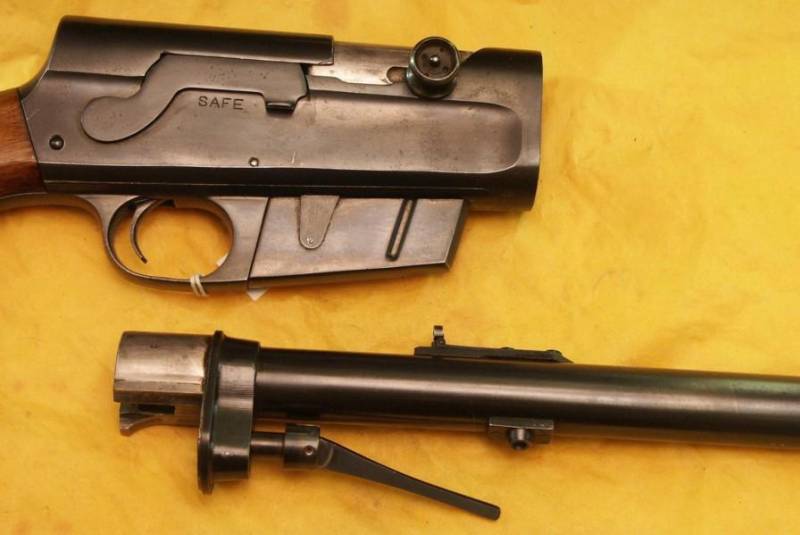 Then, by turning the key, the barrel attachment to the receiver was unscrewed, and the barrel was separated from the receiver. Photo by Alain Daubresse 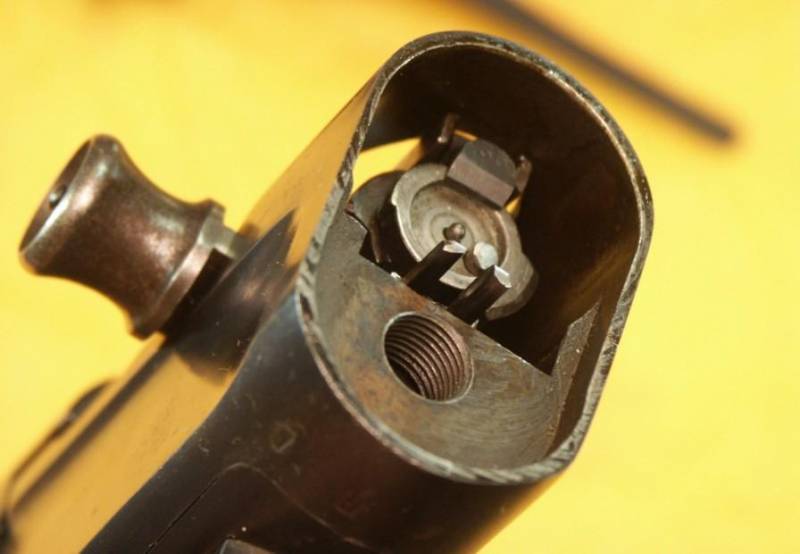 Threaded barrel attachment. Photo by Alain Daubresse
Overall, the Remington Model 8 has stood the test of time. They are still used for hunting even in the 21st century, more than 100 years after John Browning first patented its design. And what made this rifle so popular? The rifle itself or our longing for the past, when the apples were sweeter and the trees much taller? Or do good ideas just never lose their usefulness? Who knows…

But these are the numbers of the patents protecting the copyright of the company, which were stamped right on the barrel! Photo by Alain Daubresse
What about the attempts to improve this rifle? Yes, they were, but it is difficult to make perfection even more perfect. It is difficult, but if you try, you can. For example, to make the magazine ... detachable, which to a certain extent can make such a weapon more functional. The most notable attempt on this path was the work of the company “R. Krieger & Sons ”from Clemens, Michigan. They were redesigned using a standard 4/5 round box magazine. 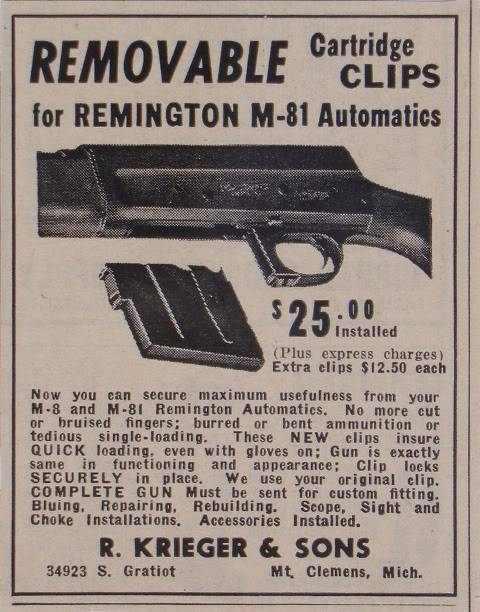 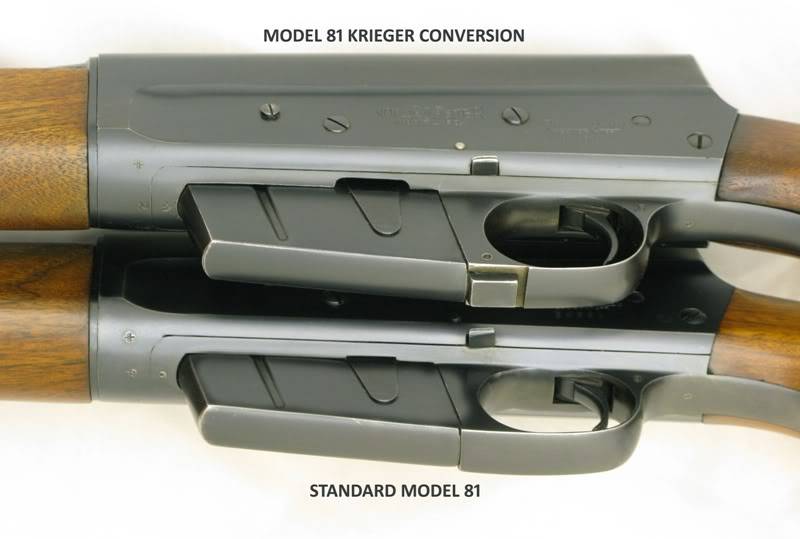 The appearance of the M81 store after conversion is at the top (the magazine latch button is clearly visible) and before - at the bottom. Photo courtesy of Cameron Woodall
What sets Krieger apart from all other modifications is its high quality workmanship. It is not known how many rifles they converted (possibly hundreds), but it is known that such conversions were carried out in the late 1940s and early 1950s. In 1951, Krieger's ad was published in the American Rifleman magazine. At the same time, the conversion itself cost $ 20 (as a result, it increased to $ 25), and another $ 12,50 had to be paid for an additional store. Compare that to the M81's price tag of $ 142,95 in 1950, and then this conversion won't seem cheap.

By the way, in Belgium this rifle was also produced and was known as "La Carabine Automatique Browning", and in Germany - "Selbstladebüchse Browning Kaliber 9 mm", and even supplied from Europe to the USA, where it was known as FN 1900. That is, FN 1900 Is not a new rifle, but just the European counterpart of the M8. Moreover, in Europe, this novelty from the FN company was accepted without much enthusiasm, rather, as a weapon for lovers of everything ultramodern. 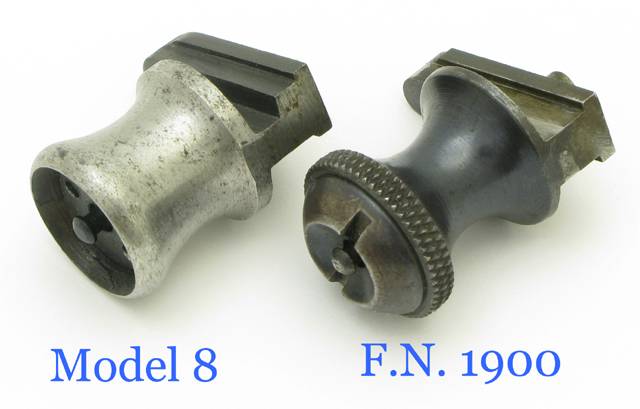 The Belgian and American rifles differed almost only in details: for example, they had different cocking handles. Photo courtesy of Cameron Woodall 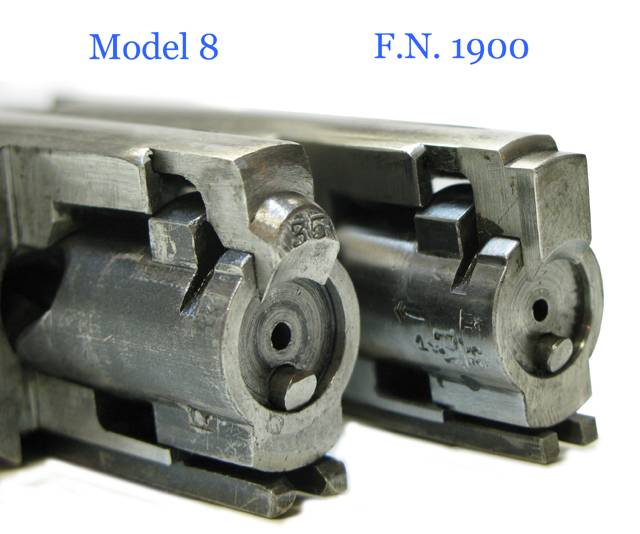 They also differed in the design of the extractor on the shutters ... Photo courtesy of Cameron Woodall
Nevertheless, compared to other European firearms of the time, it had a very high rate of fire and ... was distinguished by an elegant design. But they really paid attention to it only in the first days of the First World War, when they decided to use about a hundred of these rifles in order to arm observers on the airplanes of the French aviation.

PS The author and the administration of the VO site would like to thank Cameron Woodall for the permission he gave to use his photographs and materials.