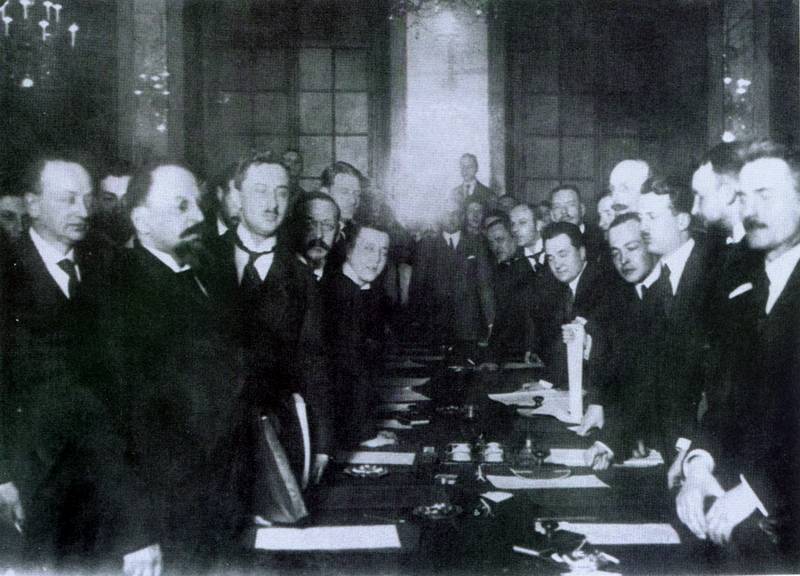 Signing of the Riga Peace Treaty 1921

The Riga Treaty was signed 100 years ago. Soviet Russia lost the war to Poland and was forced to cede the territories of Western Belarus and Western Ukraine. Also, the Soviet side undertook to pay reparations to Poland and transfer large material cultural values.

Failure of the "Greater Poland" and "Red Warsaw" projects

This was due to two main factors.

Firstly, the Red Army was tied up on other fronts, the main enemy was the White Guards. Poland used a favorable factor to implement its plans to create a new Rzeczpospolita.

Secondly, Poland was actively supported by the Entente, especially France.

"From sea to sea"
(from the Baltic to the Black Sea).

The Red Army inflicted a number of serious defeats on the enemy and reached Warsaw and Lvov. Hopes were born for the creation of "Red Warsaw", and behind it, and Berlin.

Due to a number of objective reasons and mistakes of the Soviet high command and the command of the Western Front, led by Tukhachevsky, the Red Army was defeated near Warsaw, then on the Neman. I also had to leave Western Ukraine.

Poland was drained of blood and could not develop an offensive. Both sides have come to the conclusion that peace is needed.

The main issue was, of course, the border issue. The Polish military insisted on the border along the Dnieper. The Soviet side protested and put forward its proposals on the border.

In the face of the successes of the Polish troops in Volhynia and Belarus, the continuation of stubborn battles with Wrangel's white army on the Southern Front, Moscow made concessions. Both sides agreed on the line along the river. Zbruch - Exactly - Sarny - Luninets - west of Minsk - Vileika - Diena. And cut off Lithuania from the RSFSR.

On October 12, 1920, a provisional peace was signed in Riga. On October 18, the ceasefire went into effect. The fighting was stopped.

True, the allies of the Polish lords were still trying to fight.

After the armistice, the Petliurites tried to seize part of the territory of Ukraine and occupied Litin. And they wanted to proclaim the independence of the UPR. However, the Petliurists were driven out to Poland.

A detachment of Bulak-Balakhovich operated in Polesie, he captured Mozyr. Soviet troops recaptured Mozyr, the White Guards hardly fought their way into Poland.

The parties recognized mutual independence, non-interference in internal affairs, rejection of hostile actions and mutual financial claims. But Moscow recognized Poland's participation in the economic life of the Russian Empire and in its gold reserves.

Poland was to receive exported from the Kingdom of Poland before the First World War and during the war cultural and historical values.

Polish troops were withdrawn to the demarcation line, the Red Army returned to Minsk, Slutsk, Proskurov and Kamenets-Podolsky. In general, Poland received lands in Western Belarus with a population of about 4 million people and Western Ukraine with a population of 10 million. The share of ethnic Poles in the “eastern outskirts” was small, about 10% (taking into account the registration of all Catholics and Uniates as Poles).

Along the way, the Polish gentlemen seized Vilno, the historical capital of Lithuanian Rus, from Lithuania. With the tacit sanction of Pilsudski, the commander of the Lithuanian-Belarusian division, General Zheligovsky, raised a "mutiny", occupied Vilna, south-western part of Lithuania and created a pro-Polish state formation - Middle Lithuania. This "state" was incorporated into Poland in 1922.

The curtailment of hostilities in the Western Theater allowed Moscow to complete the defeat of Wrangel's army in southern Russia. Then Moscow had to persuade Warsaw for a rather long time to stop supporting the detachments of Petliura, Bulak-Balakhovich and Savinkov, which were based on Polish soil. Also take Zheligovsky's army to the rear.

Formally, the Polish authorities stopped supporting the Petliurists and White Guards. But in reality, the matter moved only when the Soviet troops drove these units out of their territory. This created the threat of a renewed war. In addition, the Polish military demanded to leave the army at the border and support anti-Soviet formations. At the same time, Warsaw tried to get new help from France, but France was busy with its own problems.

In mid-November 1920, negotiations resumed in Riga.

The Polish leadership finally interned and disarmed the White Guard units. The Petliurites were also disbanded, but some went to Romania. The main issue in the negotiations was now an economic agreement. Warsaw, of course, wanted to get as much as possible from Russia, and Moscow was in no hurry to fulfill the demands of the Poles.

The Polish delegation demanded 300 million rubles in gold, and the Soviet one was ready to give 30 million. The Poles also demanded the transfer of 2 thousand steam locomotives, a large number of cars, except for 255 steam locomotives, 435 passenger cars and more than 8800 freight cars stolen during the war. The Poles also wanted additional territories in Ukraine: they demanded that Proskurov, Kamenets-Podolsky, Novo-Konstantinov and Novoushitsk be returned.

These requirements complicated the situation.

At this time in Europe there was much talk about the possibility of a new campaign by the Entente in Russia. The whites were also waiting for him. Wrangel retained an entire army. And he was ready for her landing in Russia.

The Poles, with the help of England and France, continued to build up their military potential. On February 21, 1921, a Polish-French military alliance was signed against Russia and Germany. Paris supported Warsaw's policy of dragging out negotiations and sought to create a single anti-Soviet belt from the Baltic to the Black Sea.

True, in the Baltics they looked at Poland with caution, they were afraid of its territorial inclinations. Romania at the beginning of March 1921 agreed to a military alliance with Poland. 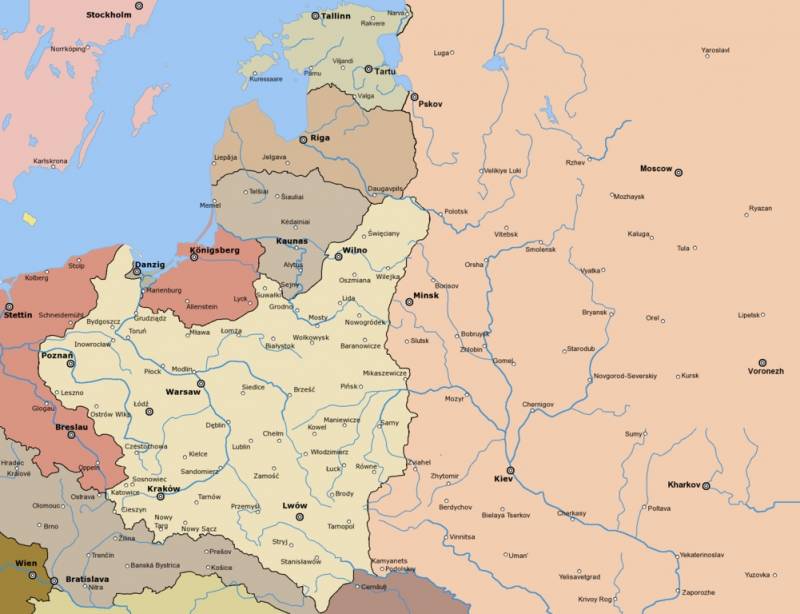 Border between countries following the results of the treaty

In the face of an unfavorable international situation, Moscow had to make concessions. On February 24, 1921, the parties extended the truce. Peace was signed on March 18, 1921.

Poland agreed to 30 million rubles in gold as the Polish part of the gold reserves of the former Russian Empire. But she demanded 12 thousand square meters. km. As a result, a compromise was reached: Poland was given about 3 thousand square meters. km in Polesie and on the banks of the river. Western Dvina. Poland received 300 steam locomotives, 435 passenger cars and 8100 freight cars. Russia left to Poland the rolling stock that belonged to the RSFSR and the Ukrainian SSR, only 255 steam locomotives and more than 9 thousand cars.

Poland was exempted from liability for debts and other obligations of the Russian Empire.

The parties pledged to respect each other's independence, not to support hostile organizations fighting with one of the countries. The procedure for choosing citizenship was envisaged.

In the RSFSR, the agreement was ratified on April 14, in Poland - on the 15th, in the Ukrainian SSR - on the 17th. On April 30, after the exchange of instruments of ratification in Minsk, the treaty entered into force.

Thus, the plans of the Polish nationalists to “polonize” Lithuania, Belarus, Ukraine and a part of the western provinces of Russia and create “Greater Poland” failed.

However, the lands of Western Belarus and Western Ukraine, inhabited mainly by the Western Russian population, were transferred to Warsaw.

Unfortunately, the Polish elite did not realize their mistakes. Warsaw missed the chance to establish good relations with Russia, focusing on its possible opponents (France, England and Germany). After the war of 1919-1921, the Greater Poland course was continued with respect to neighboring states, and especially Russia.

As a result, the Russophobic and Nazi policies of Pilsudski and his successors led to the collapse of the Polish Republic (Second Rzeczpospolita) in 1939, a new loss of statehood.

The prosperity of Poland and the Polish people is possible only in close interaction and cooperation with Russia.

As it was in the 1945-1980s. Fraternal Slavic peoples have common roots and destiny. The Poles were turned into an anti-Russian "battering ram" (Vatican, Austria, France, England and the USA). But this did not bring happiness to the people, only grief.

The modern generation of Polish politicians does not understand this and is stepping on a historical rake. Dooming the people to a new catastrophe in the future.

Ctrl Enter
Noticed oshЫbku Highlight text and press. Ctrl + Enter
We are
Soviet-Polish War of the Year 1920Diplomats of the People's Commissariat of Defense: on the eve and during the war
Military Reviewin Yandex News
Military Reviewin Google News
96 comments
Information
Dear reader, to leave comments on the publication, you must sign in.