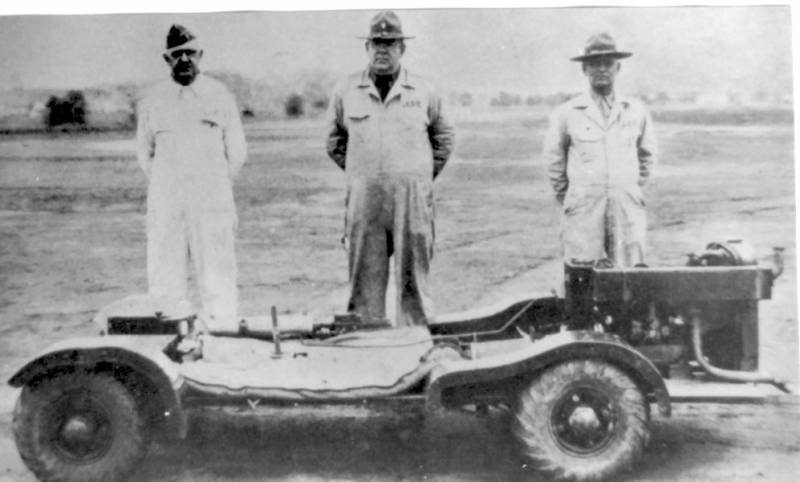 Simplicity of design usually provides certain advantages, but oversimplification can lead to problems. A striking example of this was the American-designed Howie Machine Gun Carrier reconnaissance vehicle. Despite its extremely simple and cheap design, it was unsuitable for practical use.

Instead of an armored car

In early 1937, Brigadier General Walter K. Short took the initiative to create a promising ultralight multipurpose combat vehicle. At that time, the tasks of reconnaissance and escort of infantry or cavalry units were mainly solved with the help of armored vehicles. However, this technique was quite complicated and expensive, and therefore possible alternatives had to be considered.

General Short's idea was to create the most compact vehicle with a minimum crew and machine gun armament. Due to a specially designed chassis, it had to show high mobility. Speed, maneuverability and minimal projection had to protect her as well as conventional armor. 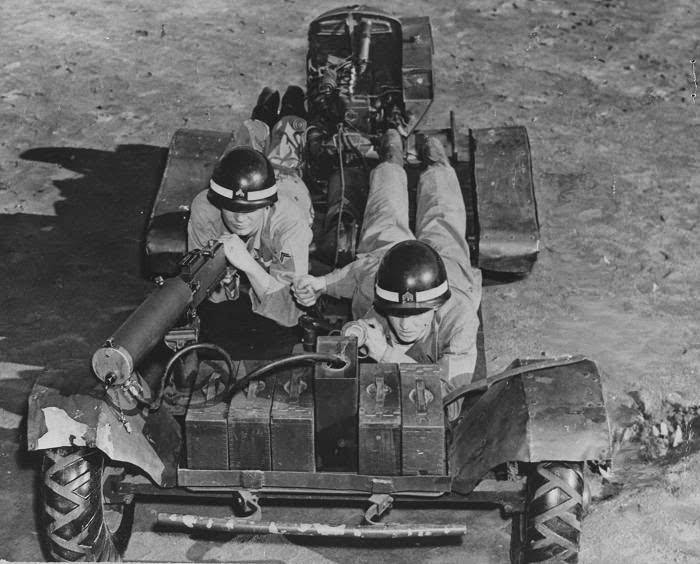 Ready to maneuver and fight
The development and construction of an experimental vehicle was entrusted to specialists of the Fort Benning Infantry School - Captain Robert J. Howie and Master Sergeant M. Wiley. In just a few months, they prepared a project and assembled a prototype themselves. In recognition of their work, the project featured in documents called the Howie Machine Gun Carrier. However, in the future, a rather offensive unofficial nickname appeared.

There is simply no place

The authors of the project did an excellent job of simplifying and reducing the machine. The finished sample was actually a self-propelled chassis without a body / body with the minimum required set of units, the simplest design of the power plant - and with the required machine gun armament. During the assembly, units of a serial American Austin car and other available components were used. 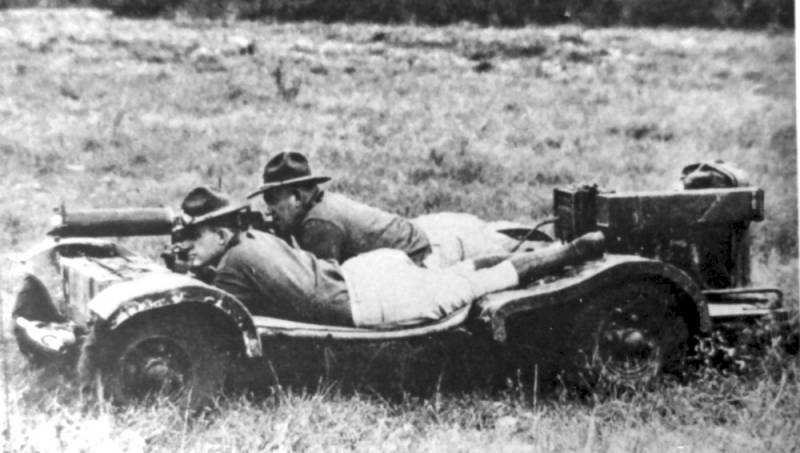 The design was based on a simple rectangular frame with flat decking. In its front part, a front axle with steerable wheels was attached. An engine and a simple transmission based on serial units were placed at the stern. The simplest bumper was envisaged, and on the sides there were wheel arches.

The power plant and transmission were borrowed from the American Austin car. The low-power engine was in the stern and was turned by the output shaft forward. In front of the engine there was a three-speed manual transmission, which provided the drive of the finished axle with a differential. The rear wheels were under the engine, which required an additional chain drive connecting their axle shafts to the axle. The wheels, gears and chains were covered with curved fenders. The suspension on both axles was rigid.

The crew consisted of only two people, and their workplaces were distinguished by specific ergonomics. The driver and machine gunner had to lie on their stomachs along the car. The driver's seat was to the left of the longitudinal axis, the machine gunner was located to the right.

The driver's seat had original controls. Instead of a steering wheel, a boat-style tiller was used, it was controlled by the left hand. To the right of the driver was a block with a gearshift lever. With the help of a rigid rod, he connected with his own gear lever. The pedals were placed in the rear of the car, under the driver's feet.

Directly in front of the shooter's place, at the right wheel, there was a kingpin for installing a machine gun. The prototype used a water-cooled M1917 product. Between the front wheels, a frame was provided in which five boxes with cartridge belts and one canister of water for a machine gun were fixed. Remaining in place, the shooter could fire at targets in a limited horizontal and vertical sector. 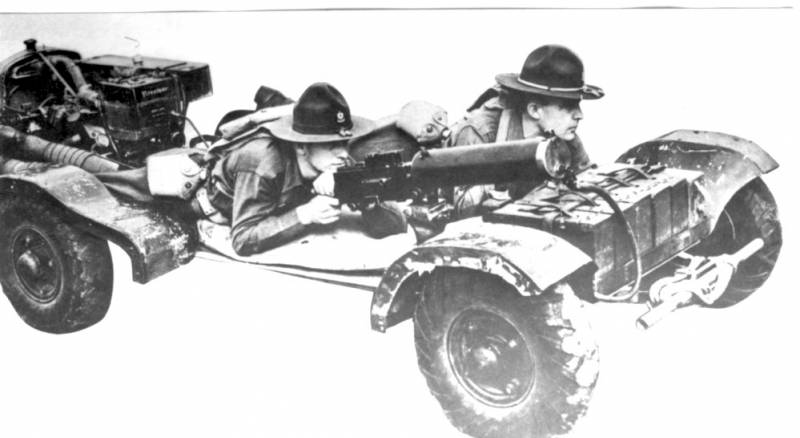 The length of the Howie MGC was only 3,15 m with a wheelbase of 1,9 m, width - less than 1,6 m. The height of the structure was determined by the dimensions of the power plant, namely the radiator. This parameter did not exceed 850 mm. Curb weight excluding weapons and crew - 460 kg. Perhaps, in the course of further development, it was possible to reduce the size and weight. The car engine provided highway speeds of up to 45 km / h.

The assembly of the Howie MGC product "from scrap materials" continued until August 1937, after which it was taken out for sea trials. All tests were carried out at the Fort Benning test site. They checked both running and firing characteristics. At the same time, lengthy tests were not needed, since the prototype very quickly showed all its advantages and, more importantly, disadvantages.

The reconnaissance vehicle, without unnecessary units, developed high speed on the highway and showed good maneuverability. The pivot machine-gun mount provided good firepower. The car easily took cover in the folds of the terrain, and its detection was quite difficult. However, this was where all the advantages ended. 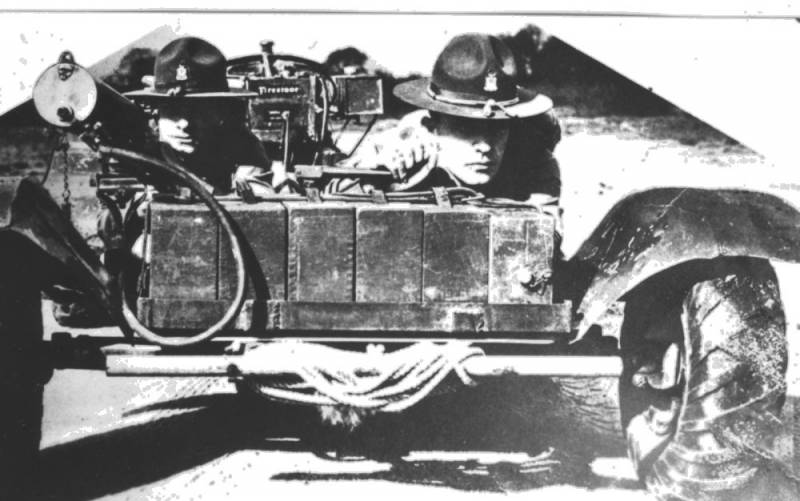 It quickly became clear that the chassis leaves much to be desired and does not even meet the basic requirements of convenience. The lack of soft suspension and low ground clearance limited mobility and cross-country ability even on the highway. The crew was "open to all winds" and the controls were not comfortable. Due to the shaking and bumps, the car received the offensive nickname Belly Flapper - probably, the ride on it reminded someone of a painful fall into the water on the ground.

As expected, the Howie MGC project received bad reviews and was left without a recommendation for further development. The army should have continued the development and operation of reconnaissance armored cars of the usual appearance, and not an overly lightweight chassis with a machine gun. By the beginning of 1938, work on General Short's concept had stopped. 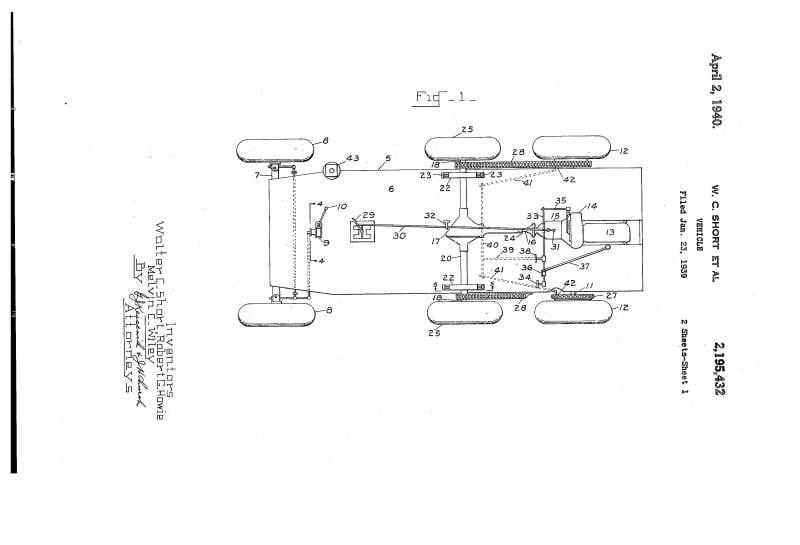 Drawing from a 1939 patent showing a three-axle chassis

However, the authors of the project did not give up. Captain R. Howie believed that his "machine gun carrier" has real prospects and is able to find his place in the army. He started correspondence with various structures and organizations, began to walk from office to office and defend his point of view. In addition, he patented the original machine. It is curious that the 1939 patent was accompanied by drawings of a two- and three-axle chassis.

The efforts of the enthusiastic officer were not in vain. In 1940, against the backdrop of the outbreak of war in Europe and the known risks for the United States, the Howie Machine Gun Carrier project again attracted attention. The Defense Department invited representatives of several car companies to familiarize themselves with the experimental design. Perhaps they could become interested in an unusual concept and implement it at a new technical level, already without the inherent problems of the existing prototype. 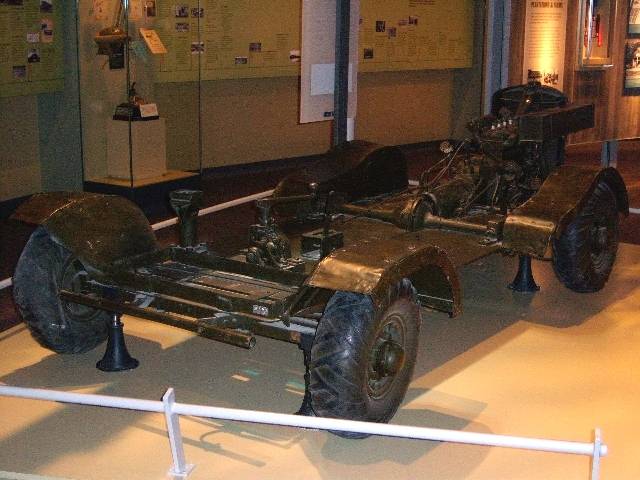 Howie MGC at the Museum
The reconnaissance vehicle again did not interest anyone, and finally was left without a future. The only prototype built was sent to storage before possible disposal. However, the "machine gun carrier" was lucky. He survived our time and after restoration took his place in the museum at Fort Benning.

Thus, the project of R. Howie and M. Wiley based on the concept of General W. Short did not give any real results, except for the understanding of the futility of such developments. It should be noted that the Howie Machine Gun Carrier was not the only attempt at a compact machine with machine gun armament. Similar products were created in other countries, and all similar projects ended in the same way - failure. Reconnaissance vehicles and tankettes of this kind had no real prospects.