The means of the Hisar-O complex. Aselsan Graphics

Turkey continues to develop its own anti-aircraft missile systems, and another sample of this kind is approaching adoption. In early March, it was announced about the successful testing of the Hisar-O medium-range air defense system, intended for use in object air defense. In the near future, this product is planned to be brought to mass production and operation in the army.

In 2007, the Turkish Ministry of Defense launched the promising programs T-LALADMIS and T-MALADMIS, the purpose of which was to create two own low and medium-altitude air defense systems to replace old foreign-made complexes. The competition stage was attended by 18 organizations; later on, Roketsan and Aselsan became the lead developers of all new projects.

Within the framework of the T-LALADMIS program, the Hisar-A ("Fortress-A") complex was created; in the course of T-MALADMIS the Hisar-O product was created. Ground tests of these air defense systems started in 2013-14. The first successful firing of the Hisar-O medium-range and high-altitude complex took place at the end of 2016. Subsequently, new tests were carried out, according to the results of which certain modifications were carried out. 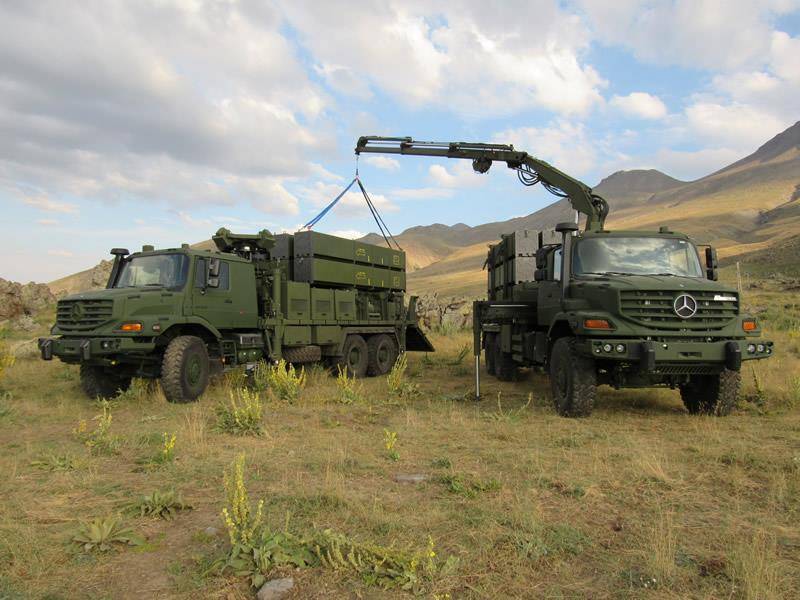 Launcher and transport-loading vehicle. Aselsan Graphics
In parallel with the fine-tuning of the two developed complexes, the design of new systems and products was carried out. So, the Hisar-U long-range air defense system is under development. For him, a Hisar-RF missile with an increased firing range and a new homing head is being created. In September 2020, the Ministry of Defense announced the development of improved air defense systems called Hisar-A + and Hisar-O +.

Last year, the development companies launched the serial production of Hisar-A complexes in the interests of the Turkish army. At the end of the year, state tests were completed, according to the results of which it was recommended for adoption.

The second prototype of the family, Hisar-O, completed testing later. This was reported only at the beginning of March 2021. As stated, by the end of the year, the armed forces will have to receive and put on alert the first serial complexes. It is curious that in the recent past, Turkey has revised plans for the production of new air defense systems. It was decided to reduce the order for short-range systems and at the same time increase plans for the procurement of Hisar-O air defense systems. This will allow you to keep spending at the same level, but increase the parameters of air defense in general. 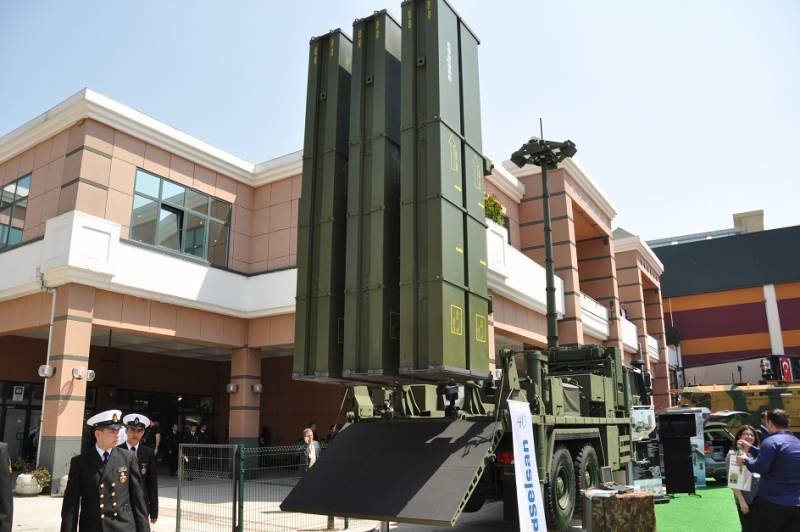 The basic technologies and solutions for the entire Hisar family were determined through the T-LALADMIS program. As a result, the Hisar-O medium-range air defense system is largely unified with a short-range system. At the same time, there are a number of important differences that determine the higher flight and characteristics of the missile and broader combat capabilities.

The minimum combat unit of Hisar-O is a battery, which includes four or more self-propelled launchers with missiles, a command post, radio and optical location stations, and various auxiliary systems. All facilities of the complex, with the exception of modern surveillance radars and power supply systems, are carried out on self-propelled cargo chassis. In particular, three-axle Mercedes-Benz Zetros vehicles are used in the construction of launchers.

With the help of an additional command post, several batteries can be reduced to an anti-aircraft battalion. Such a command post ensures the interaction of the air defense system with other forces and means of air defense and the armed forces. With its help, anti-aircraft gunners must receive data on the air situation from third-party sources.

General view of the missile for Hisar-O. Roketsan graphics
The Hisar-O battery includes an Aselsan Kalkan radar with an active phased antenna array capable of monitoring the situation within a radius of 60 km. The command post carries out tracking of 60 targets and distributes them between launchers. Full operability is declared at any time of the day, regardless of weather conditions.

The Hisar-O uses a wheeled launcher with jacks. The missiles are launched "hot" from the transport and launch containers from a vertical position. Six TPK are mounted on the lifting boom of the installation. The vehicle also has a telescopic mast with an antenna device for communication and missile control.

The anti-aircraft guided missile for Hisar-O is based on the developments in ammunition for the Hisar-A, but has a number of important differences. A larger body was used, which made it possible to introduce a more powerful solid-propellant engine. In this case, a unified infrared seeker is used. A ready-made warhead with a new fuse has been used. The firing range of such a rocket is from 3 to 25 km. Height reach - up to 10 km. 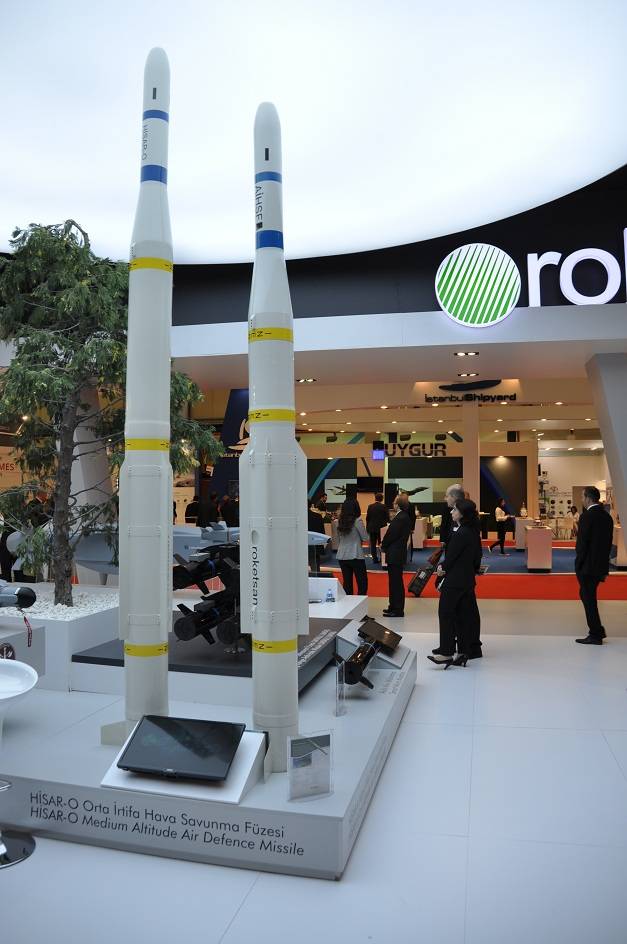 Hisar-O medium-range missile (left) and Hisar-A short-range ammunition. Photo Bmpd.livejournal.com
An improved version of the complex called Hisar-O + is being developed. According to various sources, this project provides for the replacement of part of the units and components, as well as the modernization of the missile in order to increase the main combat characteristics. At the same time, the exact characteristics of the updated air defense system have not yet been disclosed.

It is argued that in its current form, the Hisar-O air defense system can effectively fight the entire spectrum of current air threats, from aircraft and helicopters to high-precision weapons and UAVs. Work was ensured in the general contours of command and control of troops, incl. as part of a promising layered air defense system. All the main characteristics and capabilities of the complex have been confirmed in recent tests.

Currently, the Turkish Armed Forces are facing serious challenges in the context of air defense. In recent years, a serious re-equipment of military air defense has been carried out using modern systems. At the same time, the state of the object air defense leaves much to be desired and requires the prompt adoption of the necessary measures.

Thus, at the moment, the Turkish air defense has only one modern complex. The rest are outdated, and their modernization does not allow getting all the desired features. As a result, Turkey does not yet have a modern effective layered air defense that meets the current challenges and threats.

It should be noted that the existence of these problems was recognized at the end of the XNUMXs, and this led to the launch of a whole family of new projects. However, a number of characteristic factors led to the delay in work, and the first, the simplest and least effective, complex of the "Fortress" line comes into service only now. The medium-range complex has only now coped with the tests and is still preparing to enter the troops, and the long-range system is still at the development stage.

Rocket exit from TPK. Roketsan Photos
In such a situation, even the very existence of the Hisar-A or Hisar-O air defense system gives the army new opportunities. Modern complexes with given characteristics are quite capable of replacing outdated equipment, at least without loss in the overall effectiveness of air defense. At the same time, current projects create the basis for the development of new samples with higher characteristics. In the long term, in the absence of serious difficulties, this will even make the Turkish complexes a quantitative and qualitative basis for air defense.

Thus, the Turkish air defense, which is not in the best condition, will improve its position in the near future and receive new capabilities. At the same time, significant problems will remain in the form of obsolescence of available samples and dependence on foreign supplies in the case of new products. The development and production of our own family of air defense systems theoretically allows you to get rid of such difficulties, but this requires time and resources.

As Hisar projects show, Turkey is capable of creating modern anti-aircraft systems, but this task turns out to be quite difficult for her. Hisar-A / O complexes have been developed for more than 10-12 years, and are only now entering service. The Hisar-U long-range air defense system will enter the troops no earlier than 2023, however, new postponements are possible. However, even the available modest results become a reason for pride and optimism.