To the 160th anniversary of the start of the American Civil War: some prerequisites 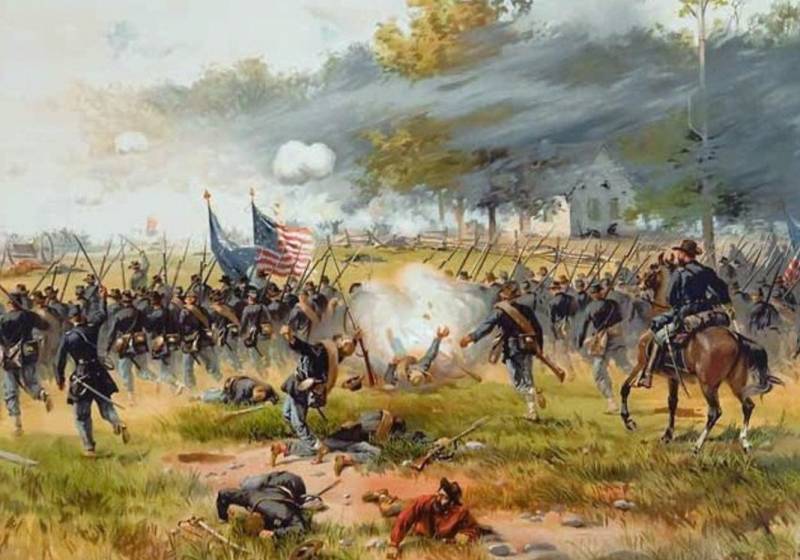 The First and Second World Wars bypassed the territory of the United States proper, and the Civil War was the last in stories US armed conflict, in which the American army fought on its own territory, more precisely, two American armies, North and South, fought with each other from 1861 to 1865.

Economic and political reasons and prerequisites for war

As you know, in the American Civil War, the northern and southern states clashed. In Soviet historiography, war was seen as the result of a confrontation between the bourgeois North and the slave-owning South. However, this is clearly a simplified interpretation of the premises and causes of the conflict. At first, there was indeed a serious antagonism between the slave southern states and the northern states, which were dominated by farming and industrial production.

Secondly, ideologically, the northern and southern states were also quite different from each other. Southerners for the most part were supporters of slavery, because they saw the real efficiency of the economy based on the use of slave labor. Until the defeat of the southern states in the war, they were more developed and richer than the northern states and rightly saw in the criticism of slavery by the northerners a real threat to their own economic well-being. Even the concept of slavery was developed as a positive good both for the slave owner and for the slave himself. This concept ran counter to the values ​​of the abolitionist movement (the movement to abolish slavery), which gradually took root deeper and deeper in the north of the United States. The emerging antagonists saw each other as a threat at least to the economic plan, believing that the opposite side was ready to expand.

Finally, the southerners' cup of patience was filled with the election of abolitionist Abraham Lincoln as president of the United States in 1860. Today Lincoln is a national hero of the States, one of the symbols of this country, along with George Washington, and in 1860 a significant part of the US population did not support this man and his ideas. The southerners responded to the election of Lincoln as head of state with a process of secession from the Union of States, especially since the US Constitution did not provide for a direct ban on the secession of states from the country.

South Carolina was the first to leave the United States - on December 20, 1860, then on January 9, 1861, it was the turn of Mississippi, January 10 - Florida, January 11 - Alabama, January 19 - Georgia and January 26 - Louisiana. Texas seceded on March 1, 1861, Virginia on April 17, Arkansas on May 6, Tennessee on May 7, North Carolina on May 20. In February 1861, the Confederation of the States of America was created, with ex-Senator Jefferson Davis, who formerly represented the state of Mississippi, elected as its president.

Interestingly, the Confederation was supported by the Indian Territories. This was due to the fact that the Indians did not want to give up slavery, and in the end this factor outweighed even the hostility to the southerners, who at one time drove the Indian population en masse from favorable climatic lands, which were then occupied by plantations.

Thus, 40% of the territory of the United States was under the control of the Confederates - supporters of slavery. As for the population of CSA, it was more than 9 million people, of which 3,5 million are African Americans. Nevertheless, many blacks then fought as part of the Confederate army, and this circumstance demonstrated a much greater complexity of political and socio-economic processes in North America than was commonly believed.

On April 12, 1861, the battle for Fort Sumter began, which is officially considered the first combat clash between North and South. However, according to other sources, sporadic hostilities were recorded from the second decade of March 1861.

From that moment on, the big war between the United States and the CSA became a reality. The fighting, which lasted four years, claimed the lives of more Americans than in any other US-fought war, including World War II. According to the most conservative estimates, the total losses of the opposing sides amounted to 600 thousand killed and about half a million wounded.

Ctrl Enter
Noticed oshЫbku Highlight text and press. Ctrl + Enter
We are
The world we leave, the world we enter, and the world between themMilitary reform as an integral part of the security concept of the Russian Federation: Systematic dynamic assessment
Military Reviewin Yandex News
Military Reviewin Google News
54 comments
Information
Dear reader, to leave comments on the publication, you must sign in.