The Dragon is growing new head, or the Big Games in the internal politics of China 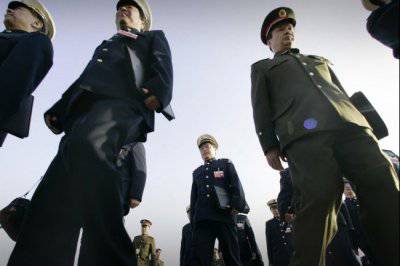 The stronghold of world monumentalism - China - a couple of months before the start of the procedure of a controlled change of power in the country is exposed to a very ambiguous political tectonics.

As you know, the transfer of power from one person to another in China is carried out in a very simple way. A variant of Chinese democracy is that the Chinese people know about the successor long before the direct transfer of the levers of government from one hand to the other takes place. The fact that he is the successor, naturally, is known to the successor himself. This is also known by his political opponents.

On the one hand, such a procedure for transferring an imperious steering wheel is a simple matter: as they say, the post passed, the post was adopted ... But there are also Chinese nuances here that have quite unexpectedly appeared lately. There are several nuances of these at once.

Bo Xilai, who was once considered the main contender for the title of "main successor," unexpectedly for many, stepped down from the race for power. More precisely, he did not get off at all, but, let's say, “he got away”. Bo Xilai, being the secretary of the Chongqing Party Committee, at one time tried to hush up at once several scandals that flared up literally in close proximity to him, as one of the very active Chinese politicians.

The first scandal is associated with such a Chinese comrade as Wang Lijun, who was considered to be Bo Xilai’s main associate. Comrade Wang, according to the Chinese press, was able to organize the wiretap of Hu Jintao’s negotiations regarding the proceedings on corruption scandals in the PRC. Then Wang Lijun apparently came up with the idea that the central Chinese authorities would be able to somehow get to him (that is, there was a reason), and if so, then it is time to “wind up fishing rods.” He tried to wind up his fishing poles in the American representation of one of the Chinese cities, but American diplomats decided not to test the great Chinese friendship for strength and Wana was gently pointed to the door where people in civilian clothes were already waiting for him.

This was the first blow to antiquity Bo, who was the successor to the head of the CCP. The second blow was struck by Bo Xilai, his beloved wife, Gu Kailai, who, according to the Chinese justice, wanted to help her son in the implementation of profitable business ideas. But on the path of his son (Bo Guagua) was a businessman Neal Haywood. This citizen of the British Crown was in China according to official information as an employee of one of the British-Chinese companies. There is not quite official information, according to which Heywood worked as a consultant in a company whose foundation was held thanks to the activity of two British intelligence officers ... His sphere of interests in a bizarre way intersected with those of Bo Jr, which caused Gu Kailai's concern. Concern over the affairs of her son went so far that Gu Kailai sent a British businessman to the forefathers, using poison for this. At least, this is how the Chinese court decided, which sentenced the woman to a death sentence with a period of two years delay and deprivation of the opportunity to hold senior positions (although what posts Ms. Gu can occupy now ...)

For many experts, Gu Kailai’s direct involvement in the murder of a British businessman, as well as her involvement in this matter in general, raises a number of questions. The fact is that if Neil Haywood was an ordinary merchant, then it is completely incomprehensible how his activities could threaten the successful business of Bo Guagua, who was a member of one of the most influential Chinese families. Even if Gu Kailai's mother's heart felt that a threat was hanging over her son's business, she could well have used other people to eliminate this threat in order to remain beyond suspicion. Many questions and the astounding insight of the Chinese investigators, which Gu Kailai brought to clear water, cause for some reason the same investigating authorities cannot in any way solve the murder of such a person as Wu Guancheng, who was the son of the ex-representative of the Politburo of the Communist Party of the PRC ...

On how Bo Xilai’s wife was involved in the Heywood murder case, there’s a man like Lin Zixu. In his opinion, the Heywood assassination and the trial of Gu Kailai are only the last link in a long chain in which people like Gu Kailai herself and even former Chinese leader Jiang Zemin are involved. The first links may concern the persecution of one of the Chinese religious movements Falun Gong, which in China was recognized as a sect, and against which representatives one after another criminal cases were opened. By the beginning of 2000, it came to the point that tens of thousands of Falun Gong representatives were sent to Chinese prisons.

Since 2002-2003 in the press began to appear evidence that in the conditions of total lack of internal organs for transplantation, these same bodies began to be taken from many prisoners (most of them Falun Gong practitioners) in prison. Such evidence has accumulated a sufficient amount. In order to hide the manifestation of a very saturated market of human organs in China, the Chinese authorities announced that the law enforcement authorities of the People's Republic of China had covered an entire criminal group that was selling organs for transplantation. However, The Epoch Times publishes materials on the fact that it was a network that was controlled not without the support of the central authorities through groups of special employees, one of whom was Gu Kailai. The same criminal scheme allegedly found a place for the very British subject Neal Heywood, who, according to the journalists of The Epoch Times, could be involved in transporting human organs from China to Europe. This is where the possible intersection of the Heywood and Gu paths manifests. In this case, there is a version that the murder of Neil Heywood took place due to the fact that in the event of pressure from the authorities, he could not tell about the organ trade, to which, perhaps, quite high-ranking Chinese officials were involved.

As far as such information can be trusted, this is a question from a completely different plane. But the fact that the murder of Haywood and the sentence of Gu about the present Chinese authorities on this very occasion even make a good hand - an obvious fact. Firstly, a regular digging under Bo Xilai is arranged, and secondly, witnesses are eliminated (if they are, of course, real) of the CCP's activities regarding Falun Gong.

Of course, to trust the versions of opposition Chinese journalists living in the West on 100% is too naive, but smoke, as we know, does not happen without fire. Anyway, but all these stories They turn Bo Xilai’s “successor”, who was expelled from the CPC Central Committee, into waste material, and take Comrade Xi Jinping as a replacement for Hu Jintao.

However, with him lately everything is somehow not very clear. The fact is that Xi Jinping is a man who is very popular among high-ranking Chinese military. He gained this popularity not because of his personal merit to the Chinese armed forces, but because of the activities of his father Xi Junjun. Si Sr was one of Mao’s main comrades-in-arms and a man very close to the Chinese army, which is considered an undoubted subject for family pride and respect among current servicemen. It would seem, what is it that a new potential leader of the PRC has support among military personnel? At first glance, nothing ... But in fact, it is necessary to take into account the fact that today in China, more than ever, the desire of high-ranking military to participate in governing the country has manifested itself. The scandal, which is connected with the statements of General Zhang Qinshen that the highest PLA commanders should also rule the country, leaked to the press and caused a stir in China.

It turns out that if Xi Jinping finds himself in the softest Chinese chair, then the same military will try to put pressure on him in order to get posts that will allow them to put their ideas into practice. And if we consider that many PLA generals crave revenge on Taiwan and Japan, the situation looks quite tense. The latter sharply manifested territorial dispute with Japan in this case can be an excellent reason to test the combat capability of the Chinese army ...

It turns out that the change of power in China, with all its external predictability, promises to be very interesting. The main interest is whether Xi Jinping will be able to keep the principles of power formation the same, or will give the Chinese generals the opportunity to hold onto the helm of ruling the country. And if this gives you the opportunity, will the Chinese generals give the wheel back to Xi Jinping? ..