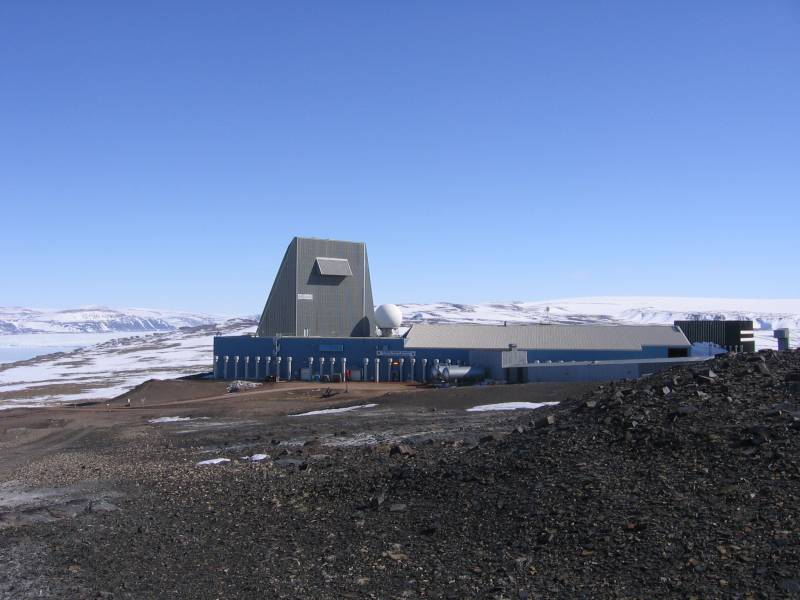 Several publications immediately reported with a great deal of sensationalism about the beginning of the final stage of construction of the American Long Range Discrimination Radar (LRDR) at the Clear Air Force base in Alaska.

I confess it surprised me.

Given that the Americans have been building this radar since 2018 and should have finished it back in 2020.

And the way this radar was described, to put it mildly, amazed.

This radar has been operating in test mode since the middle of last year. This means that this year it will simply be put on alert.

The LRDR is a long-range radar that will provide accurate metric data to improve ballistic defense discrimination and replace existing sensors in a missile defense system (BMDS). Simply put, the Americans will now see our ballistic missile launches from the first seconds of flight.

Previously, they had this opportunity only in the European part of Russia. Now Siberia and the Far East are under American supervision.

True, I was pleasantly surprised by the American constancy.

When asked what kind of missiles the United States is afraid of, the Americans answered without thinking too much about the logic, according to the standard scheme. The radar will track Iranian and North Korean missiles aimed at the United States.

With geography, the Yankees have always been bad. Ever since the days when the same radars and launchers were installed in western Europe. Then Iran was also called the main enemy. And we could not convince, taking into account the geography of our "partners". Although any student familiar with the geographical map of the world understands the stupidity of this statement.

The step is logical and predictable

The power of the American radar is roughly the same as our Voronezh radar.

Let me remind you that control over the "partners" launchers on both sides is multi-level. In particular, the currently existing constellations of satellites are constantly monitoring launchers and the movement of mobile launchers across enemy territory. It is not in vain that the military has mastered so well. But satellites cannot provide 100% monitoring.

The construction by the Americans of their own long-range radar station in Alaska is a completely logical and understandable step by the Pentagon. The fact is that the region of Alaska and our Far East was out of the control zone for a long time. We were the first to solve the problem.

Look at the geography of our long-range radars. Leningrad Oblast, Kaliningrad Oblast, Krasnodar Krai, Orenburg Oblast, Altai Krai, Krasnoyarsk Krai, Irkutsk Oblast ... It is quite logical that two more stations are now being completed - in the Komi Republic and in the Murmansk Oblast.

The question arises about the location of the American radar station.

After all, it would be possible to locate the radar a little further south, on the territory of Canada, for example. Construction costs would be much lower. Alas, it doesn't work that way.

First, the new station provides control over launches in the most vulnerable direction at the moment. Unlike Russia, the Americans cannot yet create any serious military grouping in this region.

In Alaska, there are now mainly aviation, and even then created quite recently, parts and missile launchers. The ground forces are represented by only two brigades. This is despite the fact that the "partners" (in this case, we) have the opportunity to land a rather serious landing on the territory of Alaska. Russia has units prepared for operations in the Arctic, and no one is going to expand the Bering Strait.

The construction of nuclear-powered icebreakers in Russia is proceeding at such a pace that the West froze in horror. Those beautiful, huge ships that are leaving the stocks of Russian factories today may well become carriers of ballistic missiles. And given the emergence of new types of weapons, they become, in general, a big bogeyman for the United States and Western Europe.

Neither we nor the Americans are going to attack the “partner”. The understanding of the utopian nature of such a project exists in the headquarters of all the leading armies of the world. Yes, small, regional clashes in some third countries are possible, but a global conflict leads to global destruction. But both countries are going at huge costs by deploying army units in the Arctic zone.

In particular, in the near future, the Pentagon plans to transfer a huge air group of 150 most modern F-35 and F-22 Raptor aircraft to Alaska. Moscow is strengthening the army fist on the islands of the Arctic Ocean and deploying weapons adapted for the North there.

It is trite, but all this is just a fight for the Arctic. The struggle for the riches of the Arctic zone. Modern technologies are already making it possible to extract minerals there. It is not for nothing that leading mining companies are actively working in this region. The huge money invested in the Arctic today pays off pretty quickly.

And the short northern Arctic route from Asia to Europe is quite promising. Accordingly, the expansion of his work on the pilotage of commercial ships will entail more and more claims against Russia, as the owner of this route. Already today, voices are heard from across the ocean about the injustice of geography.

"This route must belong to all countries!"
At the same time, no one remembers other such routes that have belonged to specific countries or even companies for centuries.

Global competition, technological capabilities, as well as the virtual absence of geographical restrictions for the work of international corporations have led to increased competition for

For those spaces that earlier, due to their remoteness or inaccessibility, were of little interest to world business.

We have heard many times about

"Injustice of belonging to Siberia"

Now we hear talk about the injustice of the ownership of the oil-bearing regions of the Middle East. And the most disgusting thing is that these conversations are often accompanied by the landing and bombing of those who disagree with the new redivision of the world.

And what terrible happened?

Judging by the calmness with which the Pentagon's message was received by our military, measures have already been taken.

Yes, this is the usual, routine work, the everyday performance of their duties by the military of many countries. You must always be ready to respond to aggression. And for this it is necessary not to miss this very first "disarming" strike. Americans know this too.

And there is no need to treat their generals with irony.

Ctrl Enter
Noticed oshЫbku Highlight text and press. Ctrl + Enter
We are
The tragedy of the American army ("The Atlantic", USA)Situational analysis of the death of the MH17 flight (Malaysian Boeing 777), made on the basis of engineering analysis from 15.08.2014
Military Reviewin Yandex News
Military Reviewin Google News
62 comments
Information
Dear reader, to leave comments on the publication, you must sign in.