Betrayal 1941: the corridor from Vlasov or who destroyed the mechanized corps 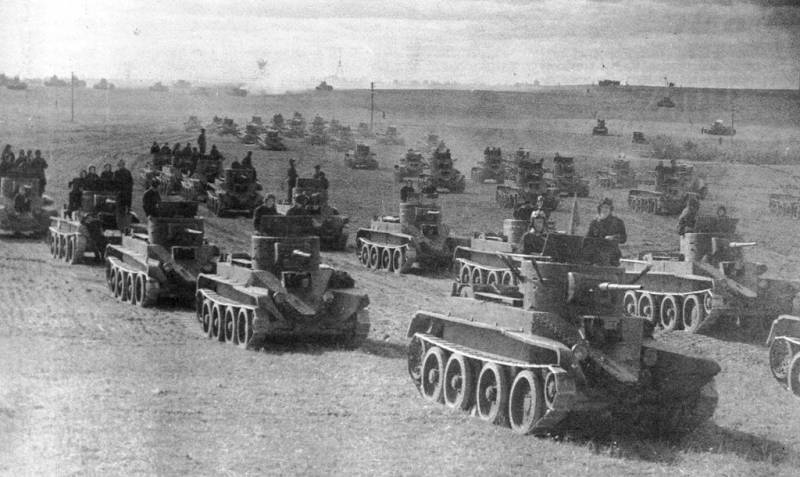 In previous publications, we tried to investigate situations in the very first days of the war, which suggest, among other things, intentional sabotage. In any case, there were too many of them to be taken as coincidences or mere coincidences. In this article, we will briefly consider whether the mechanized corps were defending themselves?

Before considering the fate of other army formations, you can also ask how they acted there. Tanks the most significant mechanized corps.

How were they involved in the early days of the war?

In fact, from the annals of the Great Patriotic War, we know about a very large tank battle (Western Ukraine), where armored combat vehicles were lost.

And, nevertheless, if we have already revealed the strange behavior of the army (12-oh, who surrendered) as a whole, as well as alarming details in the content of the orders of the headquarters of the South-Western Front, let's see, what if everything is not so decorous here.

It is common knowledge that the 5th Army acted with the utmost excellence. It included the 9th and 19th mechanized corps.

The 9th mechanized corps was commanded by K.K. Rokossovsky - in the future Marshal of the Soviet Union. His entire front line demonstrated loyalty and devotion to the Fatherland, as well as competent military art.

K.K. Rokossovsky is famous for another thing. He returned from defeated Berlin with a single small suitcase of personal belongings. And he was not convicted of robbery or looting.

That is why we will not look closely at what was happening in the mechanized corps of the 5th Army. Since the servicemen there approached the fulfillment of their military duty responsibly and with dignity, despite the difficulties and confusion of the first days and months of the Great Patriotic War.

While the corps assigned to the armies of the 6th and 26th is really worth a closer look.

Let's take a look at what ours had in the Lvov region (in the Lviv region)?

And there the 4th and 15th mechanized corps of the 6th army fought. In addition, there was also the 8th Mechanized Corps, assigned to the 26th Army.

First of all, the following incident with the operation of the above mechanized corps attracts attention. For some reason, on June 22, right in the middle of the day, the 26th mechanized corps was taken away from the 8th army, which was then fighting near Przemysl, and reassigned to the front headquarters. Moreover, he was sent completely away not only from the front line itself, but also from its supply arsenals and spare parts depots deployed in the cities of Drohobych and Stryi.

At first, this mechanized formation is moving at full speed in the vicinity of Lviv. And then it is again transported to the east of the Lviv region - to the city of Brody.

As a result, this corps, delayed for a day from the time indicated in the order of the front headquarters, concentrated on the Brody sector in order to advance towards the city of Berestechko.

In the end, on June 27, in the morning, 8 microns begins an offensive in a direction not to the west, but to Soviet territory.

Historians point out that at that hour (12:00) the 8th mechanized corps did not meet with the enemy (combat report of the SWF headquarters). 15th mechanized corps advanced in the same direction in contact with 8 microns. Both move through the territory of the USSR away from the border line. And there is no enemy ahead of them. 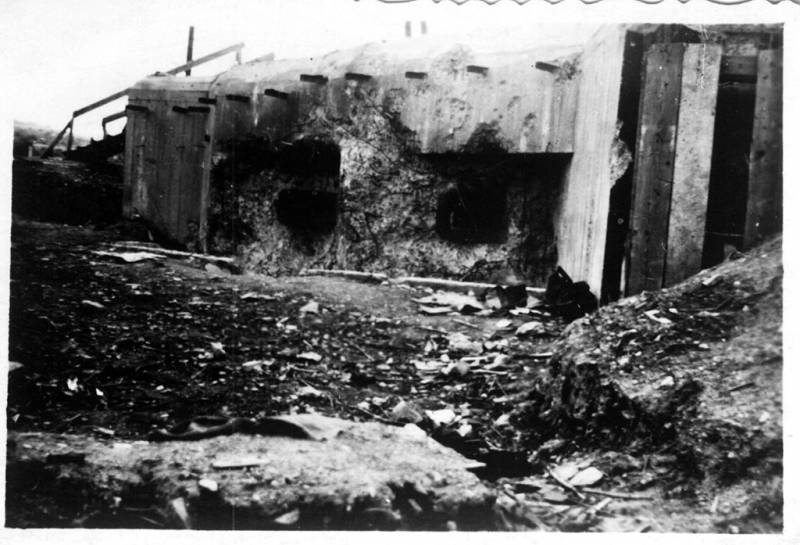 Przemysl. Molotov line. Dot. Source: topwar.ru
While earlier (June 25), front-line reconnaissance units revealed the accumulation of enemy mechanized units north of Przemysl. In other words, to the north of the fiercely fighting 99th Red Banner Division, which crushed the Nazis who had the advantage.

And on June 26, mechanized groups of fascists broke through the front of the 6th Army (left flank division). Then they were able to cut the line of the Stryi - Lvov railway, finding themselves on the outskirts of the city of Lvov (in particular, in the area of ​​the Sknilov station).

Why did we remember this?

And the strange thing is that from the base deployment of the 8th Mechanized Corps (Drohobych) to the German offensive (south-west of Lvov) was less than fifty kilometers.

If he stood in the same place, this corps, then the fascist offensive in this direction would have been someone who would have to repulse. And the flank, which opened at the 26th Army, would then have someone to cover.

In other words, some historians believe that then it was possible not to bring Lvov to surrender. If only this corps acted to defend the positions of its army.

When the Germans broke through the front, the commander of the 26th Army, Lieutenant General Fyodor Yakovlevich Kostenko, had infantry units to compete in speed with the mechanized formations of the Nazis, who bypassed it to the north.

It was he who would need extremely these same tanks from the 8th mechanized corps to cover his own flank. 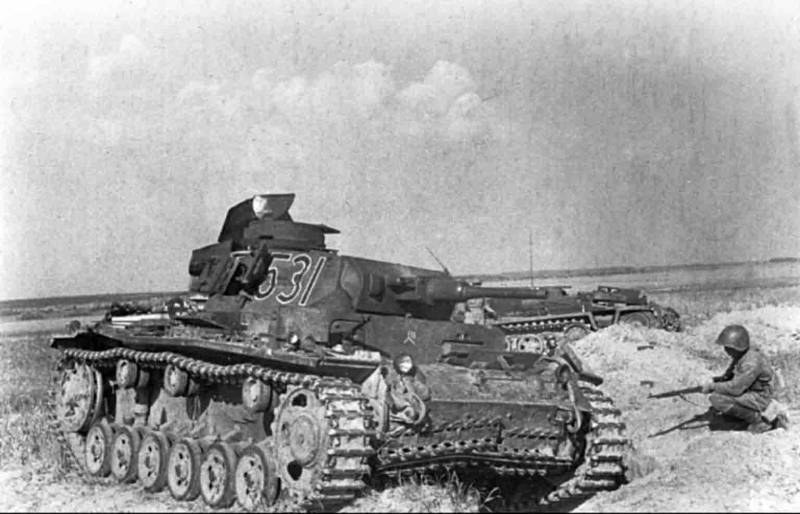 Source: topwar.ru
Alas, by that time this corps had already been driven away a hundred or two kilometers east of Lviv and the region. Yes, at the same time, they also dispatched exactly to the east - in the direction of the Rivne region to attack.

Curiously, there was, in fact, no response from the SWF headquarters to its own intelligence that the mechanized units of the fascists were crowded there.

How Vlasov gave Sknilov to the Fritz

And so it happened that, as a result, Lviv passed. But historians note that this was a place of special importance. Huge warehouses were concentrated there, where various spare parts and property were stored.

Experts point out that two warehouse hubs were located in this area at once: in Lviv and in the city of Stryi.

As for Lviv, in itself it was an ancient city, so it was inappropriate to locate huge warehouse areas inside it.

But in the vicinity of the city, the Sknilov station was the main base storage at that time. It was in Sknilov that the Nazis were eager. And they got there already on June 26.

That is why historians believe that the Nazis needed Lvov not so much as Sknilov. After all, it was there that significant stocks of various property and spare parts for entire armies were stored. Just what the blood from the nose was necessary for the Germans for their advancing formations.

So is it not deliberately for this that they drove away from the approaches to Lvov and further to the east our brave 8 microns?

Let's leave the search for an answer to this question to historians.

And let's remember ourselves, where at that very time was our 4th Mechanized Corps, which was led at that time by General Vlasov, who later became famous for his grandiose betrayals?

Recall that Major General Andrei Andreevich Vlasov (in the future - the creator of the ROA) commanded 4 MK from January 17 to July 1941.

So, you will be unpleasantly surprised.

It turns out that it was the very same Vlasov who was entrusted (or is it not by chance?) To cover exactly the very direction necessary for the Nazis to the Lvov warehouse hub: to Sknilov (from Przemysl), through the forests southwest of Lvov.

Of course, the Nazis marched through the mechanized corps of General Vlasov, as if he was not there at all.

And by the evening of June 26, Vlasov received a front-line order from the headquarters: to retreat east towards the Ternopil region.

That is, just imagine the situation: the Germans broke through / passed (past Vlasov) to Sknilov. And 4 microns, instead of protecting Sknilov and crushing the enemy, are deployed to the east?

It should be recalled here that the 4th Mechanized Corps at that time was one of the two most powerful in our army. It was constantly replenished with military equipment, including the latest. By June 22, 1941, there were almost a thousand (979) combat vehicles in the corps, including 414 T-34 and KV-1 tanks. That is, he was much better supplied with equipment than others ...

And it is this mechanized corps that does not respond at all to the fact that the enemy made a breach and moved towards Sknilov?

Moreover, the headquarters of the South-Western Front orders Vlasov to go east. That is, they don't remember the need to crush the Germans on the outskirts of Sknilov either? So why, then, Vlasov stood in those forests that are from the south-west of Lviv? Surely not only to provide the Fritzes with free passage to that very strategic hub - Sknilov?

Military historians claim that this follows from the official documents of the headquarters of the SWF.

Instead of ordering - to smash and beat the enemy on the outskirts of Sknilov, where, among other things, the necessary spare parts for his combat vehicles are stored, Vlasov's mechanized corps is ordered to retreat further to the east. Although before that the Vlasov 4 micron had already traveled more than 300 kilometers in vain, only wearing out the cars on the march.

But it seems that the front headquarters, like Vlasov, did not have any doubts about the incorrectness of the maneuver and refusal to fight?

But, in truth, there was still only one commander who sounded the alarm then.

This is Major General Rodion Nikolaevich Morgunov. He was then the head of the armored department of the South-Western Front. So, he dared to write upward memoranda that such continuous marches of mechanized formations are simply unacceptable.

He reports on June 29, for example, that at that time almost one third (30%) of the equipment was lost. Tankers were forced to abandon it due to breakdowns, as well as due to a shortage of both time and spare parts for repairs.

Morgunov sends dispatches upstairs. Begs not to drive the corps. Stop them. Provide the opportunity to inspect and repair machines.

"The entire combat materiel during these days went under its own power on average up to 1200 km and, in terms of its technical condition, requires immediate restoration."
Link

However, mechanized corps are not allowed to stop.

As a result, by July 8, they are already written off to the reserve. Because the technique has lost its combat capability. Elementary broke down and out of order.

Maybe someone just needed it?

Remember, the mechanized corps from the army of Ponedelin (12th), upon reaching the lines of the old border, in general, turned into a foot corps. Without any battles whatsoever. 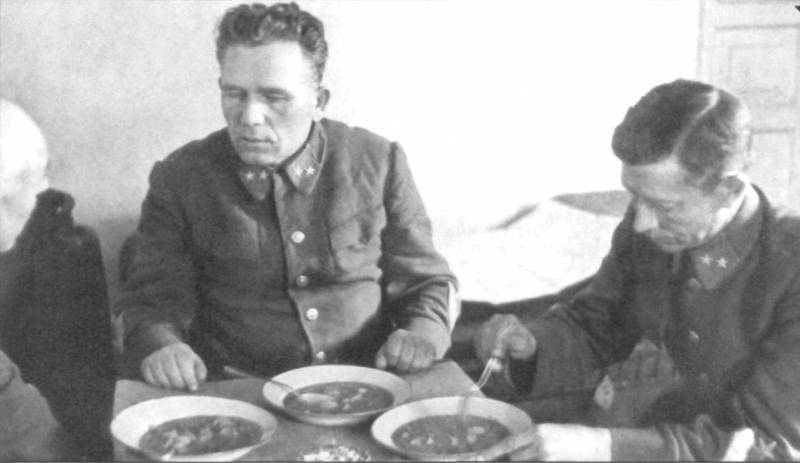 Generals Ponedelin and Kirillov in German captivity. Source: vif2ne.org
The 8th and 15th mechanized corps, in the end, nevertheless overtook the enemy: near Dubno there was a battle with the Nazis. There are no complaints about the leadership of these formations. The 8th MK fought heroically.

Well, it should be noted in conclusion that the mechanized corps in the early days of the war generally did not fight.

They, in fact, were deprived of the ability to fight in those places where it would be possible to significantly change the balance of power.

They, as if on purpose, were driven by the march along the tracks and weights until they lost their motor resources.

Despite numerous protests and dispatches to the top of the head of the armored directorate of the South-Western Front.

Author:
Irina Frolova
Articles from this series:
Betrayal 1941: captured armies
https://topwar.ru/180659-predatelstvo-1941-prikaz-ne-oboronjat-granicu.html
Betrayal of 1941: was it or not
Betrayal of 1941: the turmoil of the first days