The first unrest and the first losses in Donbass in 2014 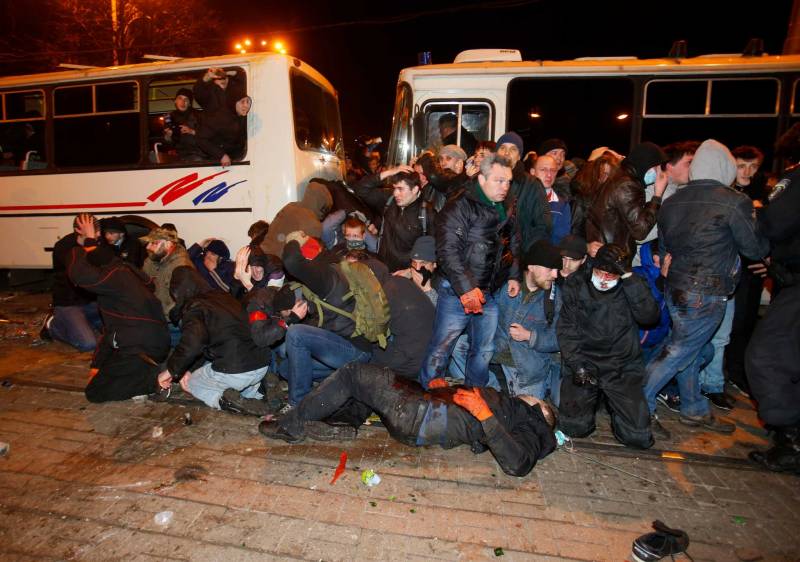 On March 13, 2014, first blood was shed in Donetsk, marking the beginning of the conflict between Donbass and Ukraine, which continues to this day.

The detachments that arrived in Donetsk, armed with fittings and cold weapons nationalists tried to hold a rally in the city center. However, something went wrong. And the angry public dealt with the provocateurs with the same methods that they usually used against opponents. In the process of the massacre, a spokesman for a local cell of one of the nationalist parties died from a knife wound. Who exactly sent the admirer of Tyagnibok and Farion to the next world, no one tried to find out - chaos reigned in the country. And the Russian spring began in Donbass.

The provocations began on February 23, when the Berkut returned to the city, whose employees were greeted as heroes. Crazy grandmothers with Shevchenko on their lips and hot young men in scarves of football teams accompanied every rally, behaved defiantly.

However, after March 13, Ukrainian provocateurs no longer appeared at public events. Moreover, during the massacre, law enforcement agencies were not too eager to protect the nationalists.

Soon after the arrest of the SBU Pavel Gubarev, a real uprising broke out in Donetsk, to which the Ukrainian special services were unable to respond. Regular seizures of the regional state administration followed, culminating in the final dispersal of the Ukrainian authorities on April 6, 2014.

Unfortunately, having seized power in Donetsk, the rebels suddenly realized that there was no clear understanding of further action. Representatives of the regionals visited the seized regional state administration, Tsarev flickered (there is even a photo showing the ex-battalion commander of the Donbass nationalist battalion Semyon Semencheko near the rostrum), emissaries from the junta appeared.

Even Rinat Akhmetov himself attended, urging the rebellious Donetsk residents to compromise with the "European integrators" who had usurped power. Citizens regularly appeared in the stands, advocating a conciliatory position and talking about federalization. Many of them, in particular, for unclear reasons, are still wiping around near the government offices.

The first militia was a combined hodgepodge: monarchists, nazbols, leftists, anarchists, neo-pagans, romantics, believers in the Donetsk-Kryvyi Rih Republic (DKR), etc. There was no clear understanding of how to live after the victory over the APU. And it was not the time to theorize ...

However, this ideological forshmak, multiplied by the grievances and ambitions of the commanders and their supporters expelled from the republics, as well as a whole galaxy of politicians, plus the disappointment that many experienced when they did not find themselves in the People's Militia, or in connection with the prolonged uncertainty of the status of the LDNR, gradually led to split.

Today in the republics, especially in the DPR, there is no unity either among the "elites" or among the politicized population.

It was not in vain

You can understand the disappointed ones - the freemen of the militia and the Cossacks were either disarmed, or forced to march and turn the APU one or the other cheek.

The restoration of the monarchy or the construction of socialism turned out to be unclaimed. Social justice or the reconstruction of the DKR did not take place. Even economic prosperity in the face of Ukraine was not achieved.

Instead of romance and utopian allusions - Minsk Santa Barbara, bureaucracy and a standard of living that does not reach even the most depressed regions of the Russian Federation. It is clear that for those who risked their lives in 2014 or even just tore a vest on the Internet, this is often not enough.

On the other hand, it is sometimes even joyful to realize the restrictive role of curators.

If it were not for her, the multidirectional enthusiastic passionaries could well have established a local civil conflict in the LPNR. And in the name of their motley ideals to drown in blood those who survived the shelling of the Ukrainian Armed Forces.

Skirmishes based on ideological differences (often conveniently concealing bickering over access to financial flows) have repeatedly arisen in the republics. And the struggle for power (especially in the DPR) is obvious. Moreover, we are not talking about a weak-willed opposition, but about quite high-ranking persons who are actively playing into the hands of Kiev for the sake of their mercantile interests or ambitions.

At the same time, one should not even try to deny that all these years the LPNR is like a bone in the throat for Ukraine.

We acknowledge that the local population is insured against LGBT propaganda and other European values. Protected from revisionism and fascist propaganda. It is gradually integrating into the Russian Federation and sooner or later will become a full-fledged part of it. That children in the republics will grow up as Russians, and not as migrants or tolerant fans of eugenics and racial superiority of Grytsya over Ivans.

And if so, it means that everything was already not in vain.

In fact, it does not really matter which slogans were used by certain citizens to defend Donbass. The main thing is that the banner was the same for everyone. And even if instead of the tricolor someone sees a hammer and sickle or any other symbolism, this is not really important.

Not only because it is necessary to perceive the fatherland not in individual aspects and moments of its existence and being, but as a whole. And also because we stood up as a united front and stand irreconcilably against one and the same enemy - against fascism.

And anyone who, for the sake of their interests, will try to manipulate this dogma and devalue the spilled blood, or, worse, try to collaborate, is an enemy and a non-human being.

Blood has been shed and many more will be shed. But this did not happen in vain.

Yes, in comparison with the comfortably assimilated Crimea (in which the heroes of a three-day vigil at checkpoints do not get tired of hanging orders on each other), Donbass has become a sacrificial lamb.

Paid for everything and everyone.

And, even worse, it continues to pay.

However, I want to believe that all this will not only return a hundredfold. (For Russia, which will receive millions of loyal citizens. And for Ukraine, which will see its end in this conflict). But it will also awaken those sentiments that, since the second half of the 90s, it was customary, if not to spit, then at least skeptically deny - courage, patriotism, self-sacrifice.

And finally, the Motherland.

And for this blood is not a pity, honestly.

Donbass pays with a lot of blood, its own and someone else's, for cleansing. But it's worth it.

Ctrl Enter
Noticed oshЫbku Highlight text and press. Ctrl + Enter
We are
What you didn't want to know about EnglandTatarstan authorities will restore order in the republic - Sharia
Military Reviewin Yandex News
Military Reviewin Google News
53 comments
Information
Dear reader, to leave comments on the publication, you must sign in.