They were the first: Colt Lightning vs. Winchester 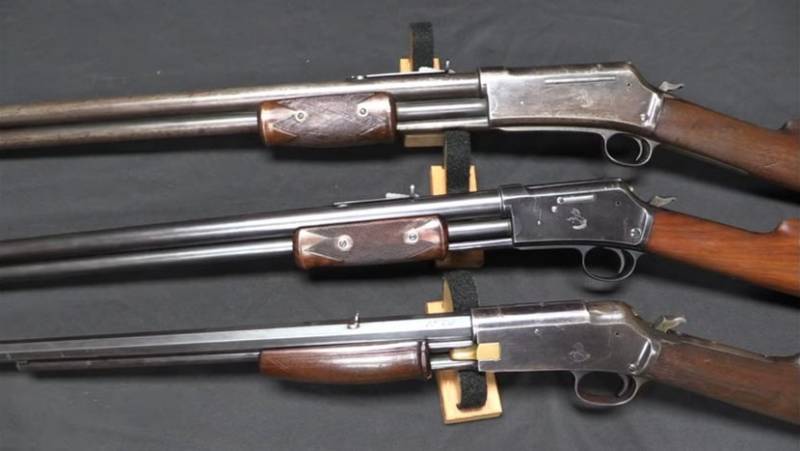 Rifles "Colt-Lightning" of various calibers with reloading using a sliding forend. It's comfortable. The butt is not removed from the shoulder when firing, the rifle is reloaded with a short movement of the right hand. Thanks to this, in terms of their rate of fire, these Colt guns surpassed all previously known lever systems, and then none of the non-automatic systems in terms of rate of fire surpassed these guns!

A sad lightning snake
An alarming swarm of elements is restless -
And here I stand motionless.
(M. Yu. Lermontov. "Thunderstorm")
Weapon and firms. Today we continue our story about the very first examples of rifles with reloading using a sliding forend. As you know, the M1897 Winchester was very popular among them. He had a chance to serve as a hunter, and a policeman, and a soldier. Although, yes, he was not the first in a series of pump-action shotguns. In the previous article, another example was named - a series of guns by Spencer and Roper. But there was also another curious sample from the constant competitor of Winchester - the company ... Colt. Yes, "Colt" made the well-known revolvers, and then pistols. But business is business. It strives to expand, it strives to capture more and more sales markets, occupies more and more product niches. And one of them, and earlier than Winchester, was occupied by Colt, although in this case it had to play on a foreign field. 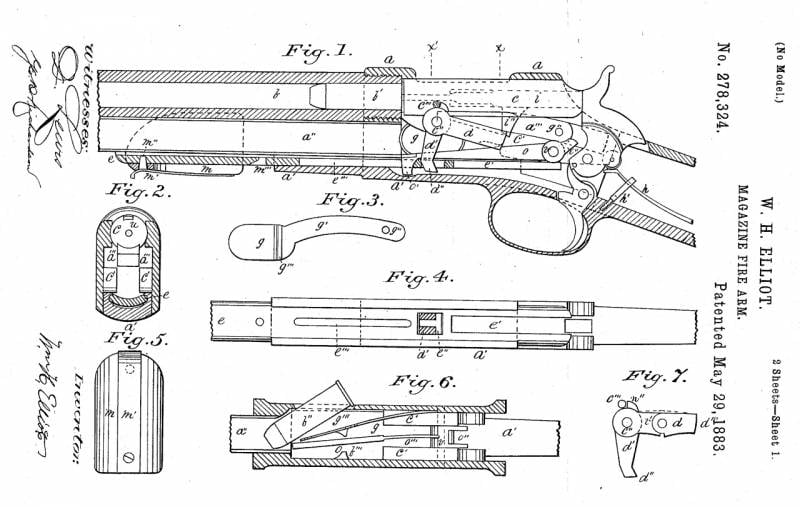 Before us is a drawing from a patent for a pump-action reloading mechanism of a gun, invented by the inventor, Doctor of Dentistry William Elliot in 1883. Elliot himself, in turn, used elements of Robinson's 1870 patent and Spencer's 1882 shotgun, but his improvements made the pump rifle more reliable, faster and easier to operate. And it was charged in the same way as "Winchesters" with a bracket - through a side window on the right side of the receiver. This is shown schematically in FIG. 6
To begin with, Colt held a dominant share of the revolver market in the 1880s, but was also quite interested in acquiring a share of the rifle market. This initially manifested itself in the Colt Burgess lever action rifle, leading to the famous alleged agreement between Colt and Winchester that Colt would not manufacture lever action rifles and Winchester would not manufacture revolvers. Well, if this agreement really took place, then Colt was not very positive about it - because in 1884, a year after Burgess's rifle was taken off the market, he introduced a new rifle.

The device of the rifle "Molniya" chambered for the central battle of calibers .32, .38 and .44
The Colt Lightning rifle, introduced in 1884, was designed for the .44-40 cartridge, the most popular pistol cartridge at the time offered for the 1873 Colt revolvers. Colt then released the Lightning in three versions, using a wide range of cartridges from .22 Short to .50-95 Express. More than 185 "lightning" rifles were manufactured, but none have been produced since 000, that is, until now.

Rifle "Colt-Lightning" with a round barrel. Photo by Alain Daubresse
The Colt-Molniya carbine, which is also called the Colt-Molniya rifle, is a fairly short carbine with manual pump-action reloading. The three models produced differed primarily in barrel length, but outwardly they all resembled the Winchester Repeating Arms Company and Remington Arms pump-action shotguns.

Colt Lightning. Receiver. Reload window, receiver cover. Pay attention to the horizontal plate at its top. There are two of them - left and right, and these are the shutter stops, which spreads them in both directions when the shutter moves back, but which also prevent it from opening on its own
"Lightning" was actively bought as a weapon for hunting, for sports shooting, and it was also acquired by the San Francisco Police Department. But it should be noted that she never had such popularity as modern rifles with a lever action reloading mechanism.

View of the left side of the receiver and the handguard for reloading. A rearing pony is engraved on the receiver - the symbol of the Colt company
"Lightning" "medium size" was produced from 1884 to 1904. It turned out to be the first Colt rifle to have a sliding bolt. A total of 89 copies of these rifles were produced in three calibers: .777-32, .20-38 and .40-44. Moreover, the highlight of this "line" was that the company produced its famous army revolver in the same calibers. Two versions were produced: the first - a rifle with a barrel length of 40 inches (26 cm) and with a 66-round tubular magazine, and a relatively short carbine with a barrel of 15 inches (20 cm) and a 51-round magazine chambered for .12-44 cartridges , which was used by the police of the city of San Francisco.

In this photo, you can clearly see the oval hole for ejecting the sleeves, as well as the lid attached to the shutter, which moves with it and at the same time tightly closes the hole for ejecting the sleeves.
The small-sized version of the "Lightning" (also known as "Colt-Lightning" second model ") became the first" Kolt "rifle chambered for rimfire cartridges, and it was produced from 1887 to 1904. This sample received its name "gallery rifle" for being used for entertaining shooting in shooting ranges. It was produced even in larger numbers than the previous model: 89 pieces in .912 Short and .22 Long calibers. So, as you can see, it turned out to be the most popular. All metal parts had an excellent blued finish. The barrel was 22 inches (24 cm) long. High-quality walnut wood was used for the stock and butt. 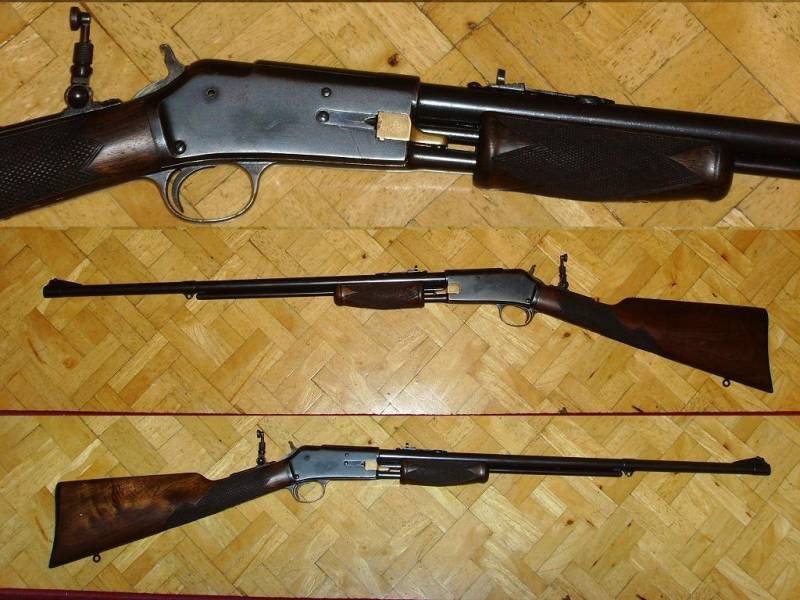 Rifle "Colt-Lightning" chambered for .22 caliber. It differed quite noticeably from the samples for larger cartridges, primarily in the way in which its magazine was loaded. Photo by Alain Daubresse
Finally, the company also produced the "Lightning" model "Express" (in production from 1887 to 1894), but only relatively few of these guns were produced, only 6 copies, and chambered for .496-38 Winchester and .55-50 Express. The barrels could be 95 and 22 inches (28 and 56 cm).

In order to fill the tube magazine of this rifle with cartridges, it was necessary to press on this bronze detail on the left side ... Photo by Alain Daubresse
The firm planned to release two more military versions, one of which could easily be folded, and the other, a large-caliber one, was to be equipped with a bayonet, but they were never produced.

Then, on the right side, the magazine tube was squeezed out just enough to open its neck with the piston head, and cartridges could be pushed into it. Then, by clicking on this bronze detail, the store was put in its original place. Photo by Alain Daubresse
"Winchester", I must say, in this "war of interests" did not remain in debt and responded with the release of three or four models of revolvers (ultra-rare for today), which turned out to be better than the famous "Colts".

Colt-Molniya carbines on their receivers had rings so that they could be hung on the right side of the saddle
Well, then they sat down at the negotiating table (that this was the case, written by many authors, although, of course, no one was holding a candle there!) To discuss the "difficulties" encountered by both firms. It was decided that the Colt would abandon the lever action rifles and the Winchester - the revolvers. So the "Koltovtsy" still won back the "Lightning". And in the end, it was released until 1904. 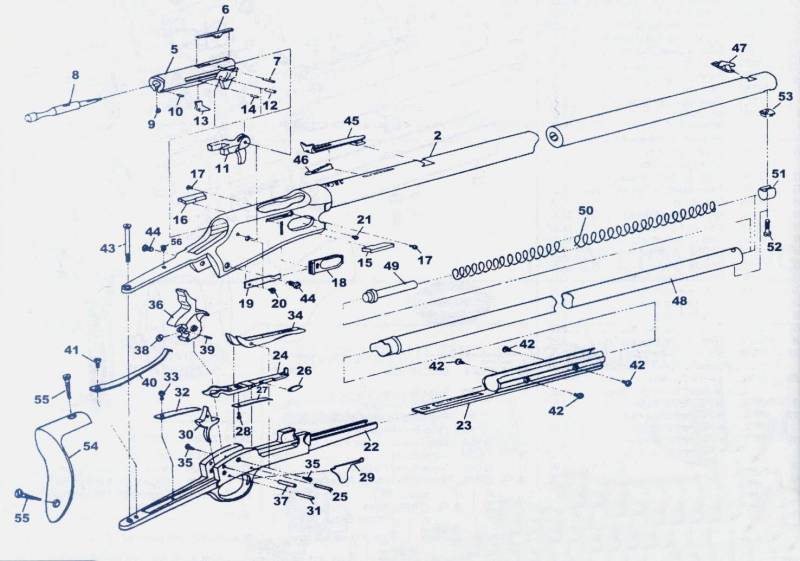 Exploded view of the "Colt-Lightning" device
However, the Colt company did not produce the sporting rifles themselves until 1957. 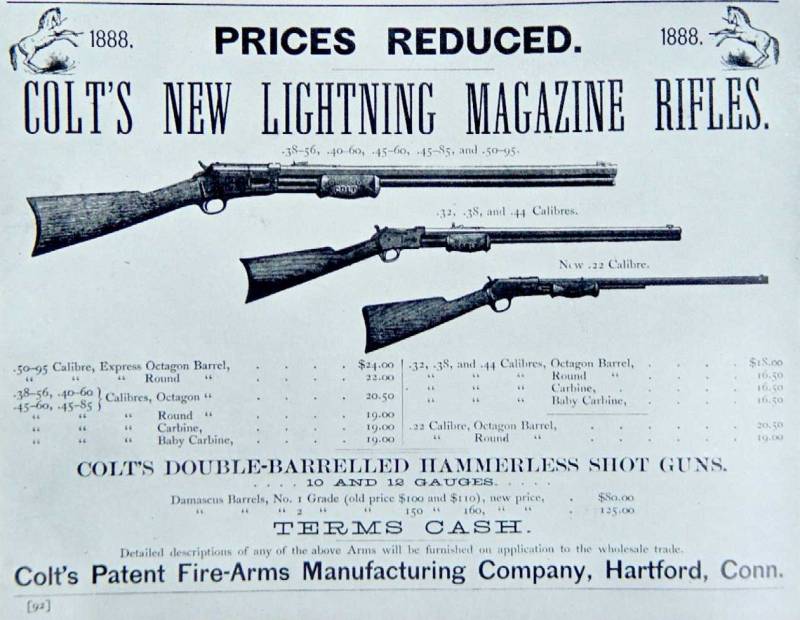 Advertising of rifles "Colt-Lightning"
Today the Molniya rifle is produced by the Italian company Uberti, and it is an exact copy of the original Colt product. At the same time, thanks to the use of modern steel and production technologies, Uberti's Molniya can be used with the most modern ammunition. 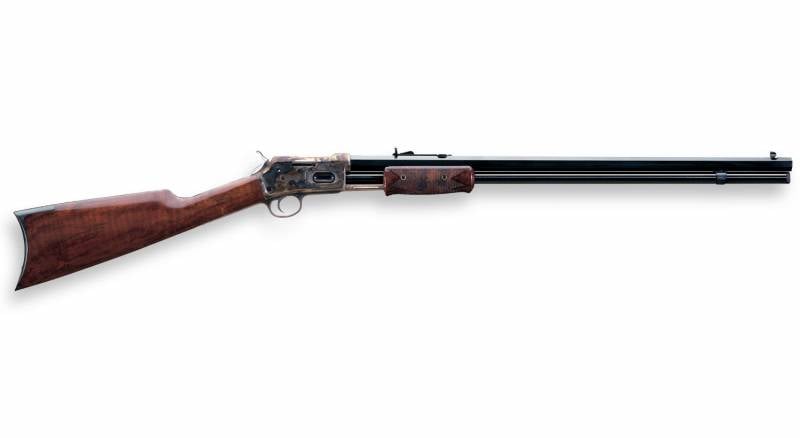 "Colt-Lightning" company "Uberti", model 1884
They are available in calibers .45 Colt or .357 Magnum, all with a glossy matt walnut stock and a choice of either blued or tarnished. As for the rate of fire, the "lightning" can still beat any "Winchester", because, as Sam Colt himself said, "nothing is faster than lightning».