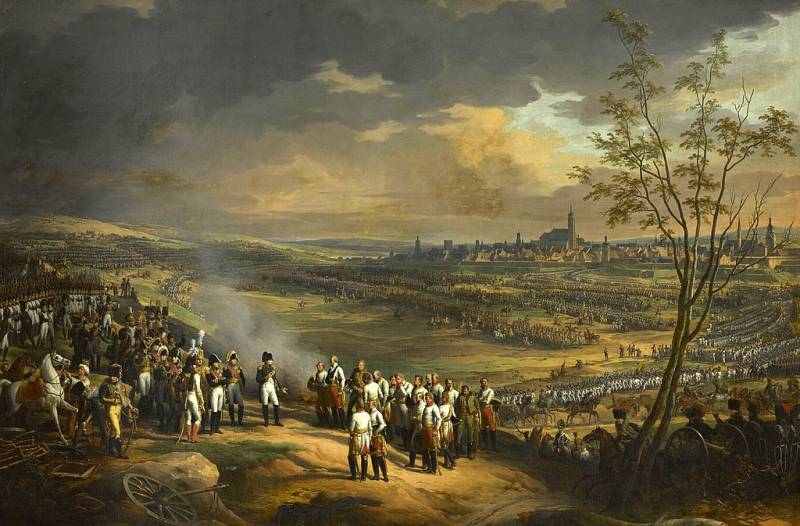 We are the fighters of the great rati!
Together we will go to battle.
Unafraid of stupid curses
A difficult path to happiness for the brethren
Boldly break through with your chest!
Youth, bright hopes
You are always fulfilled:
There will be many trials
A lot of hard work.
Our forces are young
We must connect
So that dear hopes,
To defend the faith.
(D. Merezhkovsky, August 1881)
Greatest battles stories. So, the Great Army set out on a campaign, somewhere out there, in a foreign land, to fight the armies of Austria and Russia, bought by England for English gold. The organization of the promotion of such huge masses of people was impeccable. So, the corps of Marshal Bernadotte moved from Hanover to Würzburg. Moreover, he had to go through the territory of the principality of Ansbach, which belonged to the jurisdiction of Prussia.

Marshal Marmont's corps moved from Holland and also to Würzburg. Thus, 60 people were gathered on the left flank of the French army. Now both corps began to move towards Munich.

The other corps surrounded Ulm step by step, where Field Marshal-Lieutenant Baron Mack von Leiberich was waiting for them, with 60 men under his command. Napoleon had the opportunity to meet him in Paris, where he was as a prisoner of war, and spoke about him like this:

“Mack is the most mediocre person I've met. Filled with conceit and pride, he considers himself capable of anything. Now he is meaningless; but it would be desirable to be sent against one of our good generals; then you would have to see enough interesting things. Mac is arrogant, that's all; he is one of the most incapable of people, and in addition he is still unhappy. "

It's amazing how fate still disposes of people: very often at first it raises mediocre people high, so that later ... they can be thrown into the mud. And this is one of the illustrative examples. 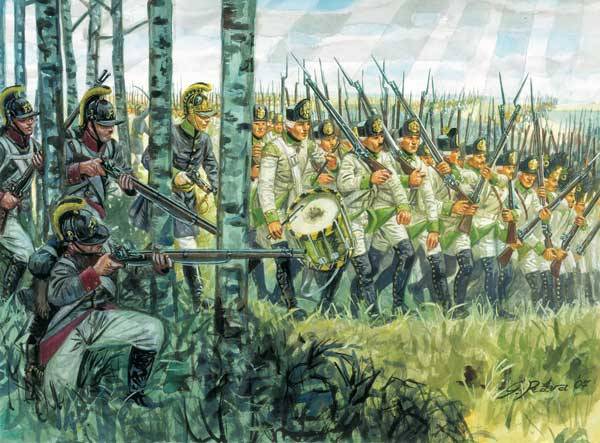 J. Rava. Austrian infantry in 1805 Jaegers on the left, grenadiers on the right
Meanwhile, Marshal Ney defeated the Austrians in the battle at Elchingen, for which he later received the ducal title, and this victory made it possible to lock the Austrian army of Mack in Ulm. True, part of the troops escaped from the encirclement, including the cavalry. Murat was sent in pursuit of them. Nevertheless, 25 Austrians still remained trapped in Ulm, and on October 000, Makk's nerves broke down, on October 17 he and his 20 people. capitulated, while Napoleon was handed over 25 guns and 000 banners. True, Archduke Ferdinand and General Schwarzenberg, who were in Ulm, with 60 thousand cavalrymen were able to break out of the encirclement at night and went to Bohemia. Napoleon on October 40, in his address to the troops, wrote:

“Soldiers of the Great Army, I promised you a great battle. However, thanks to the bad actions of the enemy, I was able to achieve the same successes without any risk ... In fifteen days we completed the campaign. " 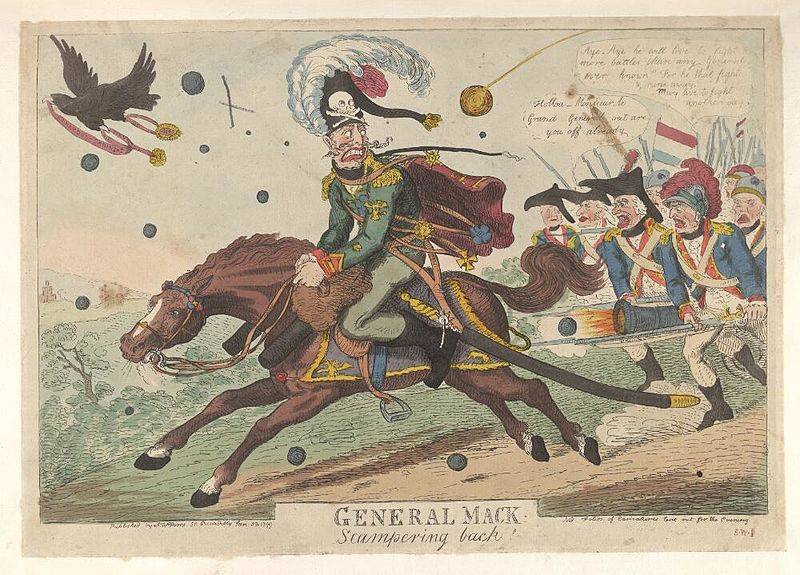 Mack flees. Print. Bodleian Library, University of Oxford
The disaster that happened was a real shame for the Austrians. Makka Napoleon released, and he returned to his own, was deprived of ranks and awards, sentenced to 20 years in prison. Only in 1819 did he receive a pardon, after which he retired and died in 1828 in St. Pölten. 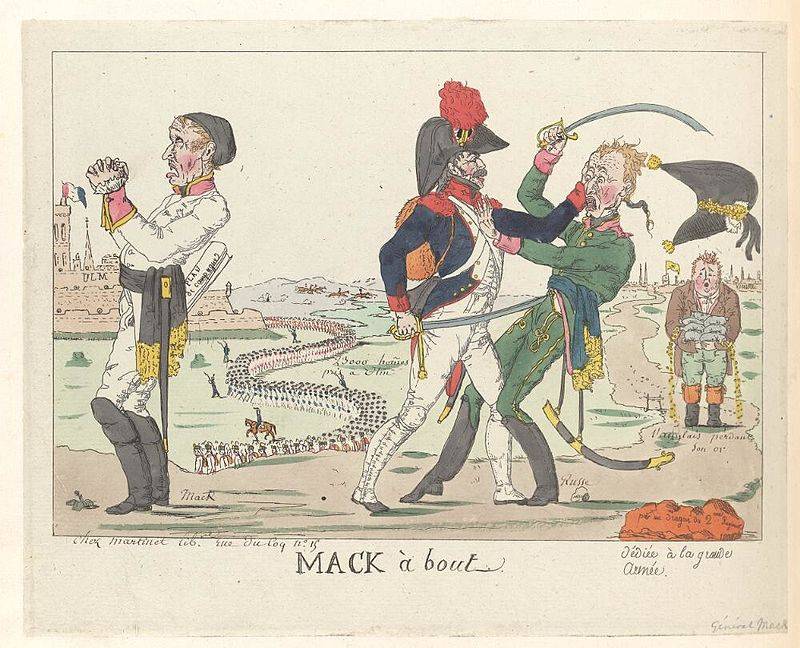 Another English caricature of Mack. Bodleian Library, University of Oxford
Then Murat overtook General Werneck and forced him to surrender with 8000 men, 50 cannons and 18 banners. 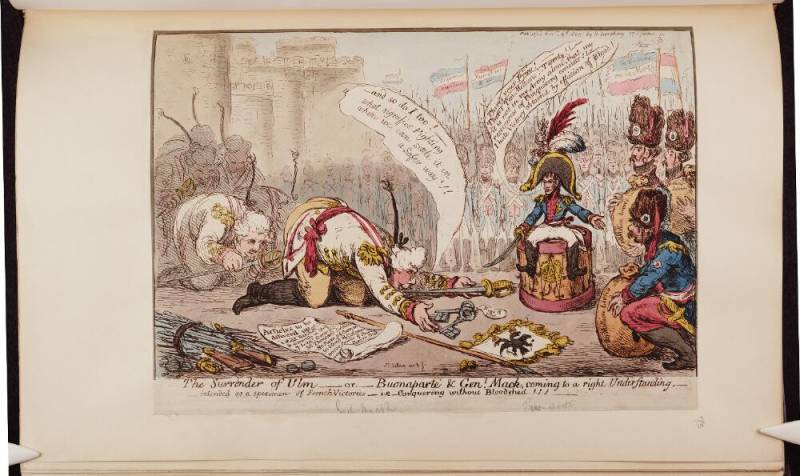 The surrender of Mack's army at Ulm was too resonant an event. So a lot of cartoons were drawn on him. Bodleian Library, University of Oxford

Blow after blow and another blow!

Archduke Johann was overtaken by the French, along with artillery, wagons and a thousand soldiers, and then taken prisoner on October 20 in Furth, near Nuremberg. That is, the Austrian army was melting like spring snow under the sun ...

However, there were some disappointing news for Napoleon. So, on November 1, he learned about the lost Battle of Trafalgar. And then he could not do anything. But, having learned about the surrender of the Austrians in Ulm, the king of Prussia, already very hesitant about choosing which side to take, was completely confused, did not dare to join the anti-French coalition and left all the military preparations that had been started. 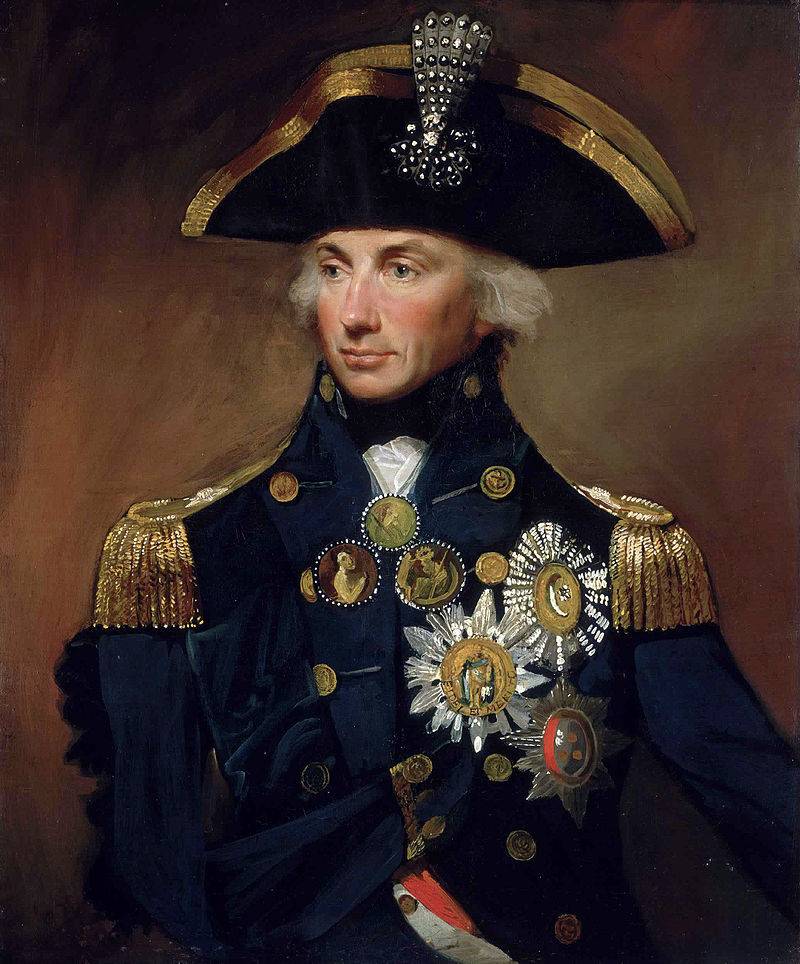 Accordingly, the 1st and 2nd corps of Bernadotte and Marmont, together with the Bavarians, covered his right flank, and in the center were Murat and Davout, Soult and the Guards, who were marching on Vienna. 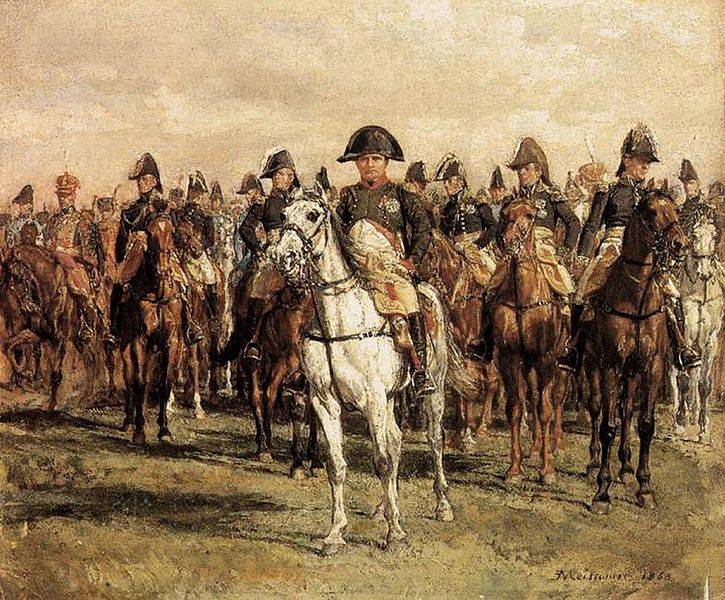 Meissonier, Jean-Louis-Ernest (1815-1891). Napoleon and his headquarters. Wallace collection. London
As for Lann's 5th Corps, he covered the left flank. The Austrians, retreating, left him the city of Braunau with all the warehouses.

True, the Austrian troops of Kienmeier and Merfeldt remained, which began to move to join with Kutuzov, who, in turn, did not go towards Vienna, but went to Moravia to join the Buxgewden corps. 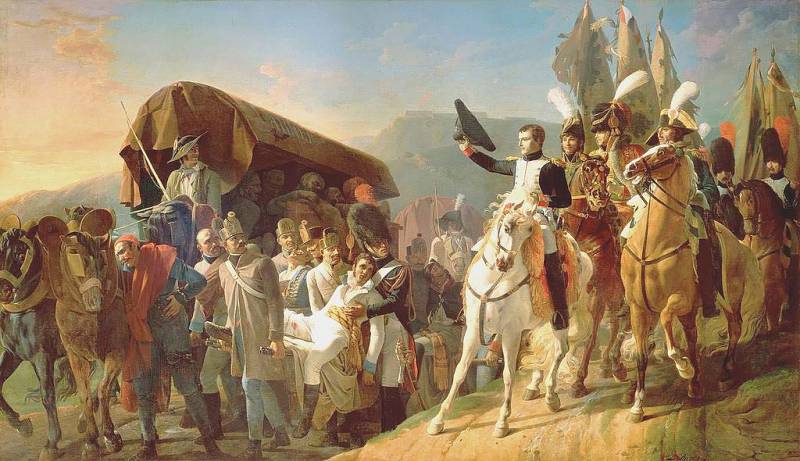 Napoleon pays tribute to the courage of soldiers after the Battle of Ulm, Debre, Jean-Baptiste (1768-1848). Marmottan Monet Museum, Paris

Meanwhile, Napoleon reached Linz on November 4, and already on the 6th ordered Marshal Mortier to take command of the temporary corps created on the left bank of the Danube. Under his command were: Gazan's division, which crossed the Danube at Linz, and the divisions of Dupont and Dumonceau, who were marching down the river towards him. On the left side of the Danube, Mortier thus had 16 people. With these forces he had to cut off the path to the north for Kutuzov. In any case, the road to Vienna was now open for the French, and this was the most important thing for Napoleon.

At that time, Kutuzov had 40 people. under the leadership of Bagration, Dokhturov, Maltitsa, Miloradovich and Essen. The Quartermaster General of his army was the Austrian Field Marshal Lieutenant Schmitt, a highly competent staff officer. Kutuzov, knowing that Mortier had only one division under his command, decided to attack it and destroy it before the main forces arrived. The plan of attack was developed by Schmitt, who suggested that Miloradovich's troops attack Gazan's division from the front, while the rest of the forces had to make a roundabout maneuver, go behind her and cut off all escape routes.

And on November 11, a fierce battle broke out on the left bank of the Danube. Everything went according to plan, and Gazan's division suffered heavy losses, but then Dupont's division came to her aid. Field Marshal-Lieutenant Schmitt himself was killed in battle, and instead of him another Austrian, Major General Weyrother, was appointed to the post of Quartermaster General Kutuzov.

After that, Kutuzov continued to retreat in the direction of Brunn (present-day Brno), towards the second Russian army marching from Russia. 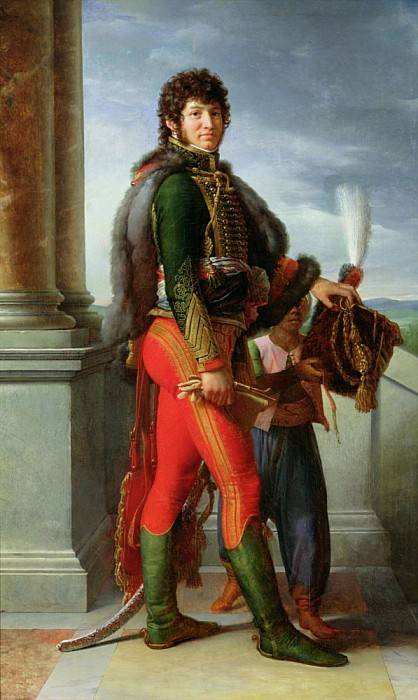 Joachim Murat. Gerard, François Pascal Simon (1767-1815). Versailles
Meanwhile, Murat approached the gates of Vienna, tricked him into capturing the Taborsky bridge across the Danube. And ... Vienna capitulated! Napoleon entered the city and, together with his guards, settled in the Schönbrunn Palace. Murat was ordered to continue pursuit of Kutuzov, and Marmont to cut the road to Italy, passing through the mountains. As for the booty taken from the arsenals of Vienna, the only thing that could be said about it was that it was simply ... "huge."

Murat, meanwhile, decided to attack the Russian rearguard under the command of Bagration and threw Oudinot's grenadiers and Legrand's light infantry into the attack. At the same time, Oudinot was once again very seriously wounded, it was not for nothing that he was nicknamed the most wounded Marshal of France, and was out of action. Bagration in that battle lost 1200 people, 12 cannons and more than a hundred carts, but managed to ensure the retreat of Kutuzov. This is exactly the very moment that was described by Leo Tolstoy in the novel "War and Peace", where the action of the battery of Captain Tushin near the village of Shengraben was shown. In general, the opponents dispersed and now could prepare for a decisive battle. 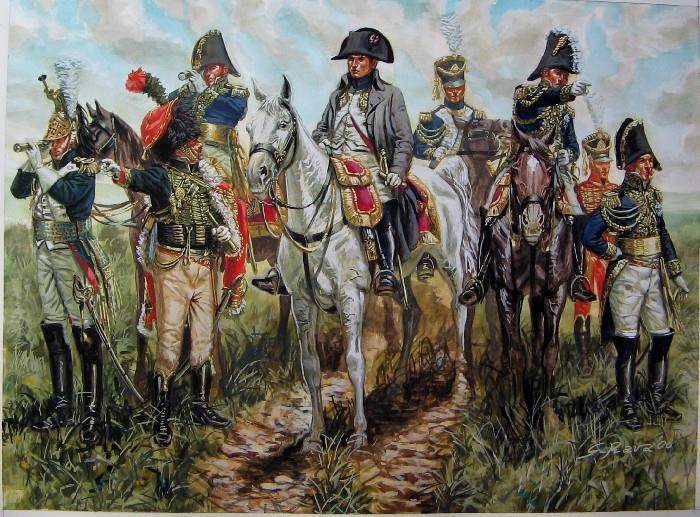 Napoleon in front of Austerlitz. Illustration by J. Rav
Napoleon chose the town of Brunn as his headquarters, but both allied emperors, his opponents, settled in Olmutz. Thus, all the conditions were created for the upcoming battle at Austerlitz. And this battle was supposed to be the decisive event of the Great Game, in which only three emperors played with the lives of tens of thousands of people!

Ctrl Enter
Noticed oshЫbku Highlight text and press. Ctrl + Enter
We are
Could Napoleon win the Battle of the Peoples?The catastrophe of the Austrian army near Ulm
Military Reviewin Yandex News
Military Reviewin Google News
109 comments
Information
Dear reader, to leave comments on the publication, you must sign in.