Aggravation of the situation in Donbass: a bluff of Zelensky's team or an approaching full-scale conflict 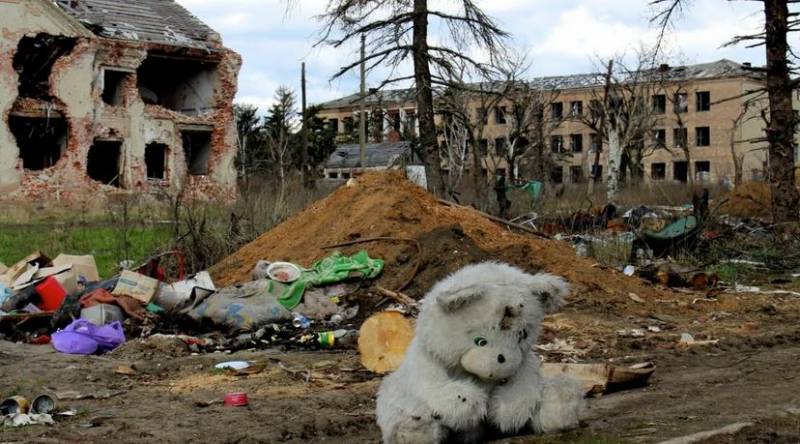 The aggravation of the domestic political situation in Ukraine since the beginning of the year and the intensification of provocations in Donbass indicate that Zelensky is losing ground and is looking for ways to stay in power. From the game of democracy and the "president of the world", he goes on to authoritarian methods of government, having certainly received the approval and go-ahead from Washington and Brussels.

After two years of reign, Zelensky's team is changing tactics and from focusing on supporting the majority of the population striving for peace and tranquility, reorienting to an active and aggressive neo-Nazi minority that sets the tone and discourse in domestic and foreign policy.

These actions are associated with many factors - the catastrophic drop since the beginning of the year in the rating of the president and his political force and the transition of his electorate to the Medvedchuk camp, the most difficult socio-economic situation in the country, caused by pressure from the IMF and the growth of tariffs for housing and communal services and prices for basic necessities, the struggle for the influence and "food base" between the oligarchy and the elites, the activity of neo-Nazi groups and the still passive position of the Biden administration in relation to Ukraine and the uncertainty on whom it will stake.

Zelensky's attempts to squeeze out the conditionally pro-Russian forces from the political field, leaving the population with the right to choose only between radical and moderate nationalists, receive the approval of the nationalist circles of the West, but embitter the population and lead to a further decline in the authority and legitimacy of the authorities.

In addition, the president's team undertook a number of political initiatives to complicate the situation in Donbass and discredit its residents, starting a discussion in parliament of provocative bills on collaborators, a special transition period for Donbass, depriving its residents of many civil rights and, in case of reintegration, internment of certain categories of citizens. supporting the republics.

Zelensky's position is further complicated by the impending international scandal related to the release in mid-March of a Bellingcat film about the failure of the Ukrainian intelligence services, the CIA and Mi-6 to detain 32 Wagnerites in Belarus and extradite them to Ukraine, which could seriously undermine the legitimacy of the president and his commands. Zelensky has something to fear, Bellingcat is connected with the British intelligence Mi-6 and is used to leak all kinds of compromising evidence and fabricated information.

The presidential office, through representatives of Mi-6, tried to prevent the release of the film, but the British side refused to comply with this request, citing freedom of speech. The head of the office of President Yermak, who objected to its implementation, is accused of disrupting the operation. Zelensky, who supported him, ordered to postpone the operation for several days, which led to its failure. Bellingcat has already announced the presentation of the film, its main message is that the Ukrainian leadership is cowards or traitors. With this film, the West is trying to put pressure on Zelensky to become more compliant in fulfilling his demands.

Zelensky's team is preparing to confront the impending scandal and through its "flush cistern" in the person of Gordon has already announced that on March 15 a meeting of the NSDC will take place, at which it will be announced

Attempts to evade the implementation of the Minsk agreements

Against this background, the activity of the Armed Forces of Ukraine sharply intensified on the line of contact with the entry into the "gray zone", constant shelling of the territory of the republics and the demonstrative transfer of heavy weapons to the conflict zone and tanks.

In support of their actions, Zelensky's team is doing everything possible to discredit the Minsk agreements, declaring their deadlock and impossibility of implementation, while taking steps in several directions - it offers its alternative peace plan for Donbass, instead of Minsk, it is trying to form a new negotiating platform with the participation of the United States and Great Britain and is pushing the international platform "Crimean Platform" with an attempt to unite the Crimean and Donbass "cases".

Kiev is vigorously promoting a new peace plan with a roadmap for the reintegration of Donbass "Key clusters for the implementation of the Minsk agreements" fours, while Berlin, Paris and Moscow do not say anything about the existence of such a plan. Apparently, we are talking about the version of the so-called "plan B" of Kravchuk with the "de-occupation" of Donbass, subjecting the Minsk agreements to revision and emasculating the political component of them.

In early March, the head of the presidential administration, Yermak, said that

“Today on the table is a specific peace plan proposed by Germany and France, finalized by Ukraine, which, we believe, corresponds to the spirit of Minsk, meets the norms of international law <...> and we are looking forward to the same position from the Russian Federation. "

He stressed that this issue will be discussed in a few weeks at a meeting of advisers of the countries of the leaders of the Normandy Four. From the side of Kiev, this looks like the presentation of an ultimatum to Russia, to which, in their opinion, it must agree under pressure from the West. Such belligerent and self-confident plans with the expectation of the help of the West are Kiev's biggest illusion; it is very risky and dangerous to talk to Moscow in such a tone.

The West is also taking steps to aggravate, Russia is threatened with more sanctions for violating human rights in Crimea and "non-compliance" with the Minsk agreements. To this end, we have prepared an informal discussion on the topic of Crimea on the UN platform on March 12 with the participation of the civil society, and Russia, in response, convenes an informal meeting of the UN Security Council on Crimea on March 17.

Russia's actions in the Ukrainian direction

Russia and the LDNR also do not remain in debt, emphasizing that about 300 thousand Russian citizens now live in the republics and they will not be left without protection. The leaderships of the republics are more and more insistently and radically declaring the creation of a "new Russian state", and this is happening in parallel with the holding, probably not without the approval of the Kremlin, of the Russian public in Donetsk the conference "Russian Donbass". Putin's warning that Russia will not abandon the Donbass, as well as the statement of Sherin, Deputy Chairman of the State Duma Defense Committee, is also quite symptomatic:

“We need to warn the Kiev side that we will react promptly and harshly if any attempts are made to disregard the Minsk agreements, to disrupt the ceasefire system.”

He stressed that in the event of an attempt by the Ukrainian troops to attack and capture the DPR and LPR, Russia will act "promptly and proactively».

All this suggests that many internal and external factors are now intertwined in Donbass, and the situation can develop in a completely unpredictable way.

The demonstrative actions of the Zelensky team about their readiness to aggravate the armed conflict in Donbass are still most likely a bluff associated with an attempt to arrange serious armed provocations with artillery and rocket attacks on Donbass and Crimea. This can be done with the aim of consolidating and diverting society from internal political problems and playing along with the Biden administration in its desire to unfreeze the conflict in Donbass and resume the war at the end of the summer before the elections to the State Duma, moving on to harsh sanctions and an attempt to provoke mass protests and a coup d'etat to overthrow the "regime Putin ".

The likelihood of a bluff is also indicated by the fact that heavy weapons are being too demonstratively thrown into the conflict zone; when preparing an offensive, this is done covertly and unexpectedly for the enemy. In addition, Russia is taking measures to counter-battery suppression of the enemy, pulling the necessary equipment to the western Crimea, probably the same measures are being taken in the Donbas.

The likelihood that there will be a full-scale offensive in Donbass is very small, although there are enough hot and brainless heads in Ukraine to take this insane and suicidal step. At the same time, Kiev cannot but understand that such actions will not remain unpunished by Russia, immediate retaliation will follow, and "ukram" will have to recall Saakashvili's sad experience with the 08.08.08 operation, heavy losses and "boilers" without any military successes are guaranteed and can lead to the finish of the statehood of Ukraine, as it has been warned about this more than once.