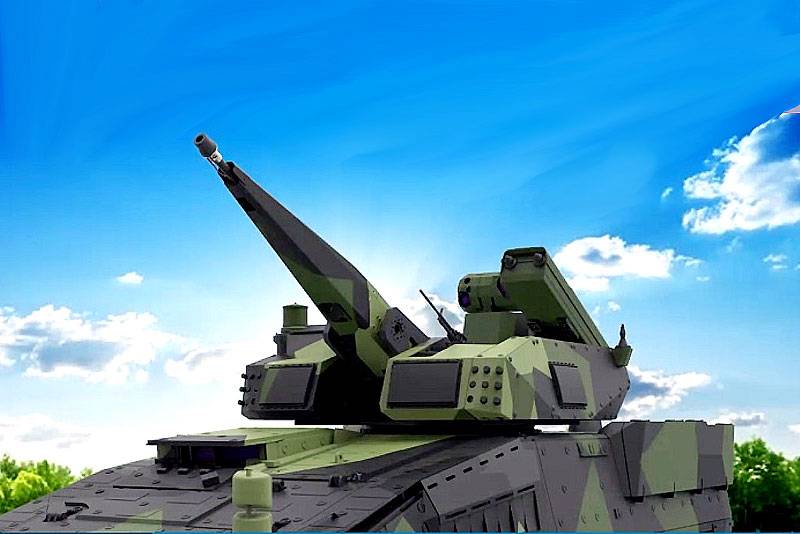 The presentation of the Rheinmetall Skyranger 30 module took place on March 3 and was held online. Representatives of the developer company announced the reasons for the emergence of the new project, indicated its goals and advantages, and also published several images of a promising product.

The developers of the complex note that recent conflicts show the presence of new challenges for air defense. Western European armies, incl. The Bundeswehr, abandoned self-propelled anti-aircraft artillery and with it lost part of their combat capabilities. A recent study showed that the German army without decommissioned Gepard ZSU cannot effectively counter the UAV threat characteristic of modern conflicts. All this became the reason for the development of a new project.

The Skyranger 30 module is being developed by the Swiss branch of Rheinmetall (formerly Oerlikon Contraves). As a basis for this project, they took the old Skyranger 35 anti-aircraft system with different weapons and characteristics. Some of the existing units were replaced, and new systems were introduced. The result is a new module with improved characteristics, capable of effectively combating all current threats.

Currently, design work is underway on some of the module's components. By the middle of 2021, it is planned to conduct the first firing from an experimental KCE cannon. The fully equipped combat module will be sent for testing before the end of the year, and within a few months after that, full-fledged fire tests will begin.

After testing and fine-tuning, the development company plans to suspend the project. To save time and money, preparation for the series will begin only if the order for the modules is received. Upon signing the contract, Rheinmetall Air Defense will be ready to launch production and manufacture serial Skyranger 30s as soon as possible.

The Skyranger 30 product is a turret with cannon armament and electronic equipment, designed for mounting on a carrier vehicle. The tower is uninhabited; operator stations are located inside the chassis. At the same time, a hatch is provided in the tower, and an operator's workplace can be installed inside. The total weight of the product is up to 2,5 tons. For comparison, the Skyranger 35 tower weighed at least 4 tons.

The module body is assembled from armor plates providing level 2 protection according to the STANAG 4569 standard. It is possible to install additional modules that increase protection up to level 4. All internal units, the gun barrel and retractable optical devices are covered with armor.

The module's main weapon is the Rheinmetall KCE 30mm automatic revolving cannon, a lightweight and modernized version of the old Oerlikon KCA product. The rate of fire is 1000 rds / min. and a range of fire up to 3 km. For the KCE cannon, a new programmer was created, installed on the muzzle. It is smaller and has improved performance. The weapon is placed on a stabilized installation with electric drives. All-round firing with elevation angles up to 85 ° is possible.

The anti-aircraft self-propelled gun must use shots of a standard size of 30x173 mm with a fragmentation projectile and a programmable fuse. The projectile has a warhead weighing 200 g and carries 160 cylindrical tungsten striking elements. Such ammunition has already been put into service and is used by German armored vehicles equipped with a Rheinmetall Mauser MK30-2 / AVM cannon. Tests and practice have confirmed the high performance of these shots. 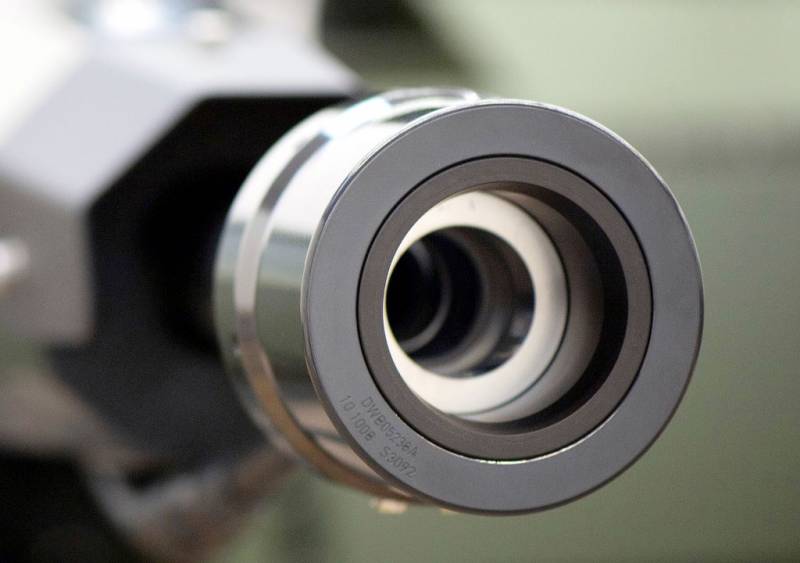 Muzzle device with programmer
In the basic configuration, the additional armament of the module consists of only two ROSY (Rapid Obscuring System) smoke grenade launchers on the front. Block ammunition - 9 grenades. The possibility of mounting a coaxial machine gun of one model or another is declared. In addition, space is provided at the left side for a retractable launcher for two anti-aircraft missiles.

The task of detecting air targets is assigned to the small-sized Rheinmetall AMMR (AESA Multi-Mission Radar) S-band radar. It includes five small active phased array antennas. Two are mounted on the front of the turret, two more are placed on the sides and one is at the stern. The detection range of small-sized air targets reaches 20 km. At the request of the customer, it is possible to use an additional radar with suitable characteristics.

A support with an optical-electronic station FIRST (Fast InfraRed Search and Track) is installed in the aft part of the tower. Its task is to review the airspace, detect targets and issue target designation to other means of the complex. To aim the gun at the target, an OES of the TREO type is used. It has high-resolution day and night cameras and two laser rangefinders for air and ground targets.

Data from all electronic and optical means are fed to the fire control system. It provides weapon guidance to a target, data generation for a programmable fuse, etc. The operator has the opportunity to observe the operation of the automation and make adjustments. Probably, the LMS is integrated with communications that provide external target designation and work in a battery or battalion.

The development company plans to test a new combat module, but mass production will be prepared only after receiving orders. There is every reason to believe that she will have to do this in the very near future. The Skyranger 30 project in its current form may be of interest to different customers, and Rheinmetall has a chance for contracts. 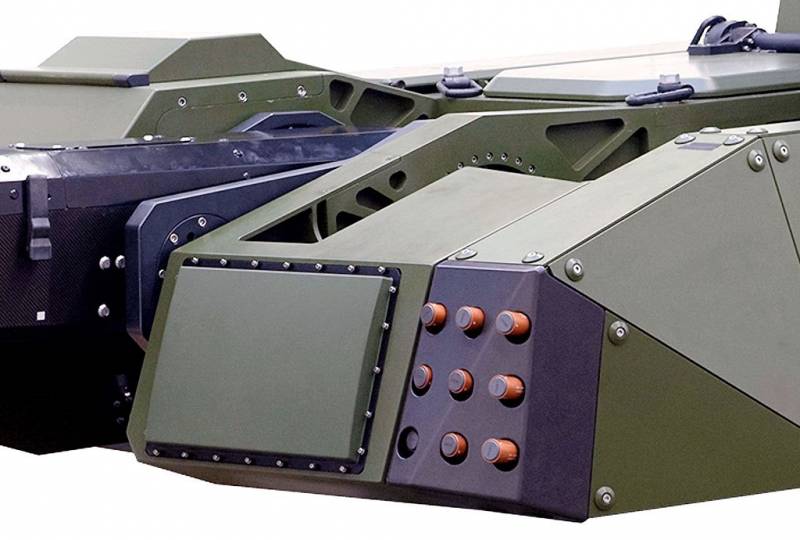 Tower forehead with AFAR AMMR and ROSY block
The new project offers a comprehensive solution to the urgent problem of protection against UAVs. At the same time, it is envisaged to use ready-made or advanced components capable of providing high operational and combat characteristics at a reasonable cost. In addition, the Skyranger 30 has no special carrier requirements and can be used with a wide range of chassis. All these factors expand the circle of potential buyers.

The proposed set of detection tools is of great interest. Unlike other ZSUs, the Skyranger 30 system should have an AFAR kit that provides obvious benefits. There are also optoelectronic devices that allow observation without unmasking oneself with radiation. It is very likely that the set of radars and OES is indeed capable of detecting small-sized UAVs with sufficient probability and providing accurate weapon guidance.

The Rheinmetall KCE gun and additional assets should provide ample combat capabilities. So, the programmer and the controlled fuse of a 30-mm projectile make it possible to effectively attack air and ground targets. Undermining is carried out at a minimum distance from the target, and a large number of GGE increases the likelihood of defeat. According to the developers of the project, during the tests, only one such element was able to destroy a commercial-type target drone - it pierced the body, optical device and battery, causing a fire. 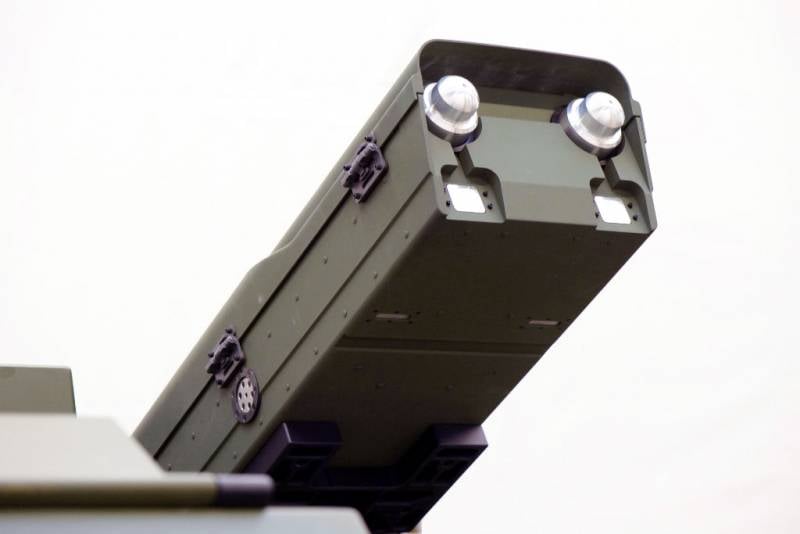 Missile launcher
It should be noted that the prospects of the Skyranger 30 project depend not only on the technical features of the module itself. Interest from potential customers can be stimulated by the specifics of recent conflicts. The wars in Syria, Libya and Nagorno-Karabakh have shown what a danger UAVs of different classes pose and how important the means to combat such a threat are. Rheinmetall is presenting its new project in fact in the wake of the recent showcase events.

This year, the first tests are to be carried out, which will show the real characteristics and capabilities of individual elements of the complex. Then their integration will be completed, and next year Rheinmetall will be able to show both the fully equipped combat module and its main capabilities. In addition, you can expect certain improvements, incl. with the expansion of the range of tasks to be solved.

Obviously, the market will react to the appearance of such a combat module with at least great interest. In addition, it should be expected that in the near future other manufacturers of weapons and equipment will offer their versions of anti-aircraft systems to protect against UAVs. What place will Skyranger 30 occupy on the market and what will its struggle with competitors be - time will tell.