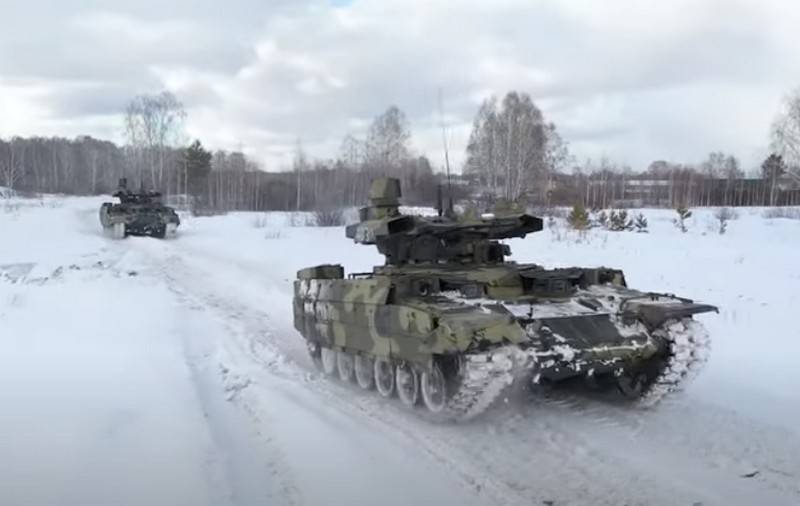 The Ministry of Defense has begun the second phase of testing support combat vehicles tanks (BMPT) Terminator. According to the press service of the military department, the military for the first time worked out the interaction of support vehicles with T-72B3 tanks.


As explained in the Ministry of Defense, BMPT "Terminator" for the first time operated in battle formations with tanks, providing cover for the T-72B3 in the offensive. At the same time, the entire arsenal of weapons of support vehicles was used: 30-mm 2A42 automatic cannons, 7,62-mm Kalashnikov machine gun, AG-17D automatic grenade launchers and Kornet ATGM launchers.

For the first time, the crews performed the tasks of supporting and covering tank crews in the offensive, acting in a single combat formation
- said in a statement.

On the eve of the BMPT crews conducted the first regular shooting.


At the beginning of February this year, the military department announced the completion of the first stage of BMPT testing, dedicated to the study of support vehicles. At the same time it was reported that the second stage of the experiment would be devoted to the use of BMPTs in the battle formations of tank units. Shooting will also be practiced in various tactical situations.

Recall that the first batch of eight BMPT "Terminator" entered the 90th Tank Division, stationed in the Chelyabinsk region, for trial operation at the end of November 2020. Prior to that, BMPT was checked during the "Kavkaz-2020" command-and-control system.

BMPT "Terminator" is made on the chassis of the T-72. The vehicle is armed with two 30mm 2A42 automatic cannons, a 7,62mm PKT machine gun, and four launch containers for the 9M120 guided missiles (Attack complex).
Ctrl Enter
Noticed oshЫbku Highlight text and press. Ctrl + Enter
We are
New combat vehicle "Terminator" will be presented in SeptemberRogozin will personally participate in the promotion of the Terminator tank support combat vehicle
Military Reviewin Yandex News
Military Reviewin Google News
98 comments
Information
Dear reader, to leave comments on the publication, you must sign in.