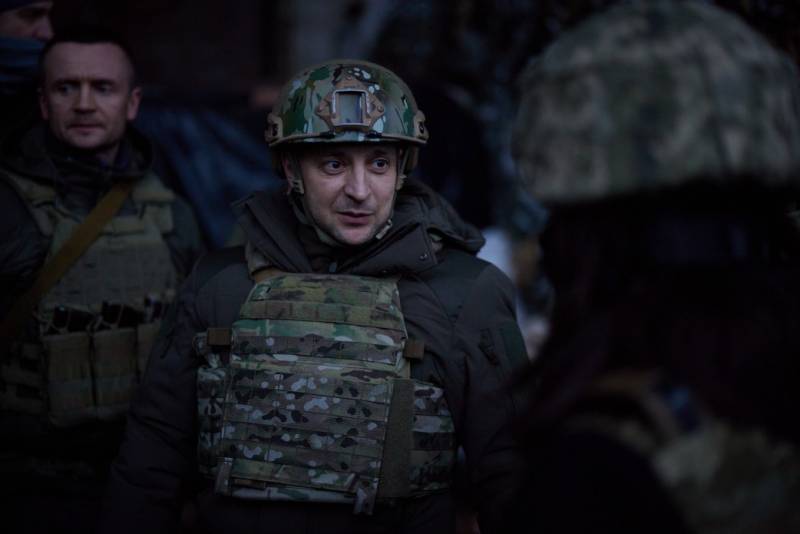 What the Ukrainian authorities are demonstrating today looks like the agony of Kiev's entire foreign and domestic policy. In almost all areas of public administration and state policy, President Zelensky and his team have shown their complete incompetence.

This explains the tightening of laws and often just the arbitrariness of the authorities in matters that are important for the majority of Ukrainian citizens. Society is deliberately intimidated, forced to hide its own views and adapt under the pressure of the authorities.

By the way, Russian liberals declare about the same.

Remember the demands of the Russian libertarians?

"Dissolve the FSB and lustrate all employees",
"Organize normal elections",

moreover, such that the elected bodies would necessarily include not those for whom the majority votes, but precisely the opponents of the authorities,

"To reform the prosecutor's office from above",
"To carry out judicial reform from above."
Well, the cherry on the cake -

"Abandon the presidential republic",
understand, to deprive Putin of power.

But this is in Russia.

In Ukraine, the situation is completely opposite. Zelensky understands that he has no chance in democratic (even with a Ukrainian-specific understanding of the term) elections.

Let's try again to blow on the "Donbass bonfire"

A few facts from the latest "perturbations" of Kiev.

First, deliberate skating of platforms with heavy equipment in the daytime and without following the basic rules for transporting military equipment. You see, we are driving equipment to Donbass. Look how many tanks we have. Watch and shout about it louder on social media so that the enemy gets scared.

Meanwhile, only four Ukrainian brigades are actually more or less trained. These are indeed combat brigades, which were trained by NATO instructors and provided with equipment by the United States and its allies.

The only thing that really causes concern is the appearance of a sufficiently large number of NATO "instructors" in the Donbas. It is clear that the intensity of mutual shelling will increase. Moreover, the losses will not be so much from the firing of guns and armored vehicles. Snipers will work.

Here is what the representative of the DPR Defense Ministry Ivan Filiponenko said about this:

The main task of foreigners is to train snipers from the airborne units of the Armed Forces of Ukraine to carry out provocations planned by the Ukrainian command for this spring. "
Secondly, at a fairly serious level, Ukrainian politicians are lying about some new plan to resolve the situation in Donbass. Allegedly, this plan has long been known to all the participants in the "Normandy Four" and all that is required is the consent of Russia.

"Zelensky effect",
stating that Merkel does not know anything about it yet.

Thirdly, the shelling of civilian objects of the LPNR looks like ordinary reconnaissance in force. Shelling and tracking what and how counteracts these shelling. This is also understandable.

Self-propelled equipment, tanks and self-propelled guns were concentrated on the nearest approaches to the front line of the Armed Forces, for the introduction of which directly into battle it takes 20-30 minutes.

Well, and fourthly. Stirring began on the Russian-Ukrainian border in Crimea.

If all of the above is combined, it turns out that Kiev is intensifying the situation. It is necessary, on the one hand, to distract its citizens from internal problems. And, on the other hand, to stir up Western leaders, who are clearly bored with Donbass.

Kiev, Berlin and Paris are working, but Moscow only puts a spoke in its wheels

To begin with, let us recall yesterday's statement by the press secretary of the Russian President Dmitry Peskov:

"The Russian side was not presented with any 'new plan' of Kiev for the peaceful settlement of the conflict in Donbass."
"I have no information about the existence of such a plan."
However, this somehow does not agree with the statement of Andriy Yermak at the online event "Conflict in the East of Ukraine: Prospects for 2021":

“Today there is a concrete plan on the table - a peace plan proposed by Germany and France, finalized by Ukraine. And we believe that it absolutely complies with the spirit and principle of the Minsk agreements, it complies with the norms of international law. "
This one phrase says it all. Kiev rejected the "Minsk agreements", and instead offers something,

"In accordance with spirit and principle"
these agreements. We already heard something similar at the Paris summit in 2019. When the Ukrainian president portrayed the primacy during Putin's speech.

In principle, that (long-standing) plan was just a Ukrainian interpretation.

"Steinmeier formulas".
The same step-by-step plan for stabilizing the situation, nicely called "clusters", but in the Ukrainian version. Give us Donbass, and then we ourselves will put things in order with the help of nationalists and the SBU.

If so, then the following statement by Ermak looks completely illogical and even ridiculous:

“If Russia today declares its readiness to end the war, the reintegration of the occupied territories into Ukraine, the return of our citizens, then this will meet all the criteria ...

We are waiting for the position from the Russian side ”.
The position of Russia on this plan was announced by the President of Russia back then, in 2019. There is an agreement and it must be fulfilled. That's all. And all references to a change in the situation, to "supporters" and other excuses are from the evil one. And Russia will ensure the implementation of these agreements by using its own army against the aggressors.

If you want to "surprise the world", go to work in the OP of Ukraine

To be honest, the insolence of the lies of Ukrainian politicians is striking. Lies as the basis of domestic and foreign policy are tough. At the same time, Ukraine demands that its statements be taken seriously. To be believed.

How can pathological liars be trusted?

I already understand the logic of the Ukrainian president today. Seven years of war, mountains of corpses, a sea of ​​blood and ... no end in sight. The situation is getting worse every day in almost all directions.

It is necessary to force Russia to strike at the Armed Forces of Ukraine, destroy a couple of units or formations with missile strikes and start shouting loudly that this is proof for you that Ukraine has been at war with Russia for many years. The West, and especially the United States, will fully agree with this point of view.

Zelensky's desire to meet with the heads of France and Germany one-on-one fits perfectly here. The expectation is that Washington will put pressure on Berlin and Paris, and an agreement on the "clusters" will be reached.

It looks pretty pretty on paper. "Brilliant" Ukrainian politicians have put Russia in a certain position. Either you agree to our terms, or you are responsible for 15 thousand people killed and for the collapse of Ukraine. Then pay for the collapse of the money ...

A completely logical question arises - maybe there was some kind of conversation at some venues where Ukrainians meet with Republicans. Today, the only such platform is TKG. So what? The representatives of the LDNR did not see any plans. There was not even talk about it!

“If Kiev really wants to restore this world, then it is necessary not to invent some ways of“ modernizing ”the Minsk agreements, not to try to replace them with new“ scenarios ”or to replace the special status of Donbass, clearly fixed by a set of measures, with laws on internment, transitional justice, collaboration and other reality in terms. "
Lies, lies, lies ...

For some reason, I am more inclined to believe the DPR Foreign Ministry (which is not noticed in such fake statements) than the Ukrainian politicians. When politicians lose their foothold, they become populists. Promise an easy solution to unsolvable problems and thus silence your critics. Better yet, close objectionable media and other sources of information ...

Everything that Kiev is actively declaring now is just an imitation of vigorous activity. Zelensky speaks at all venues about his active work on preparing a new meeting in the "Normandy format", about his telephone conversations with European leaders, about global support for Ukraine.

At the same time, he understands very well that there will be no meeting before the implementation of at least part of the "Minsk agreements" The decisions of the Paris summit are quite enough to resolve the situation. And "just talking" to European leaders is not at all beneficial for their own image.

By and large, Zelenskiy needs the support of Paris and Berlin. And even more support from Washington for one simple reason. Today Ukraine is completely untenable both militarily and politically.

Soon the middle of March, and Zelensky did not wait for a call from the United States.

The new owner, despite numerous licking and licking of all parts of the body in Kiev in the past, is still unable to overcome the personal grievances inflicted on him by the ukropolitiks during the election campaign.

Well, the "slalom" of Ukraine near the abyss continues.

We can only control the actions of the Kiev authorities, timely suppress military inclinations in the Donbass, and help the citizens of the LDNR economically and technologically.

The people of Ukraine must decide their fate.