Shooting oil can or ersatz-Thompson 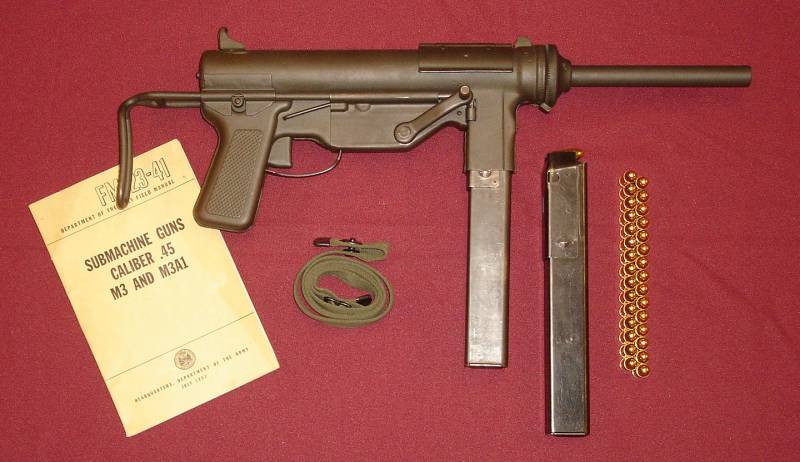 The American M3 submachine gun and its modification M3A1 are symbols of the Second World War.


The submachine gun stood out for its unprepossessing, but memorable appearance, having received the official nickname Grease gun. Weapon it turned out as simple as possible, but did not lose its effectiveness. In the USSR, after testing, they even recognized this model as one of the best examples of automatic small arms, rating the M3 above the Thompson submachine gun.

This American submachine gun got its nickname Grease gun (literally "grease gun"). It was all about the oil can built into the handle. In addition, in its appearance, the weapon very much resembled automobile oil cans-syringes.

The weapon, which was developed as a cheap and simple alternative to Thompson, did not enjoy much love in the army during the Second World War. But it did not cause any negative either. Moreover, история put everything in its place. Erzats-Thompson, as the American soldiers called the M3 submachine gun, turned out to be surprisingly tenacious and in demand, having outlived his famous relative.

The model remained in service with the American infantry at least until the 1960s. And in tank troops delayed until the early 1990s and Operation Desert Storm.

Total war and familiarity with models of foreign-made submachine guns, primarily the German MP-40 and British STEN, forced the Americans to develop their own version of the wartime submachine gun. The model, with its low cost and simplicity, like European models, should not have lost its high fighting qualities. 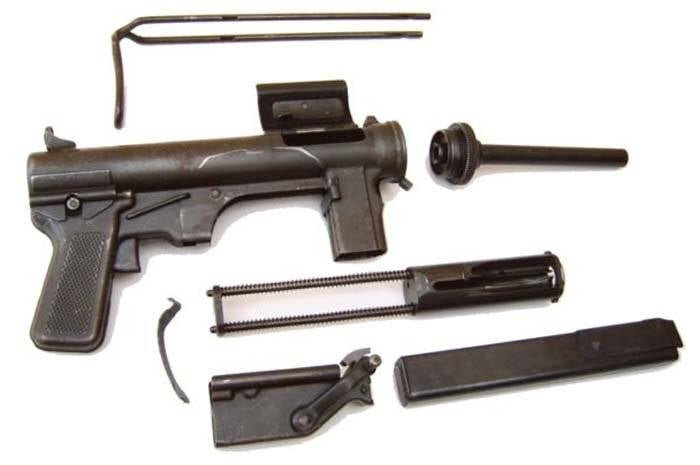 Partial disassembly of the M3 submachine gun
New small arms for the American army were created by an emigrant from Germany, George Hyde. The designer designed his most famous submachine gun completely without wooden parts, deciding on the widespread use of stamping and spot welding. The latter circumstances, among other things, made it possible to deploy the mass production of the model at car factories.

In practice, in the manufacture of the M3, in addition to the barrel, only the bolt of the new submachine gun required some additional processing. At the same time, a simple retractable wire-type stock was lightweight and could be used as a cleaning rod.

A series of tests carried out at the Aberdeen test site showed that the weapon is resistant to dusting with a cement mixture. Weapon and mud test passed. And the Marines especially noted that a submachine gun can be fired even after it was dropped into the water in the surf. And tankers and paratroopers especially emphasized the compactness of the novelty.

The weapon, which was created as a cheap analogue of the Thompson submachine gun, most of all resembled not a deadly product, but an auto mechanic's tool. The model was difficult in appearance to be attributed to the advanced developments. However, the submachine gun coped with its main tasks with a bang. Weapons did not need to be elegant to be used on the battlefield.

The model, designated M3, fully met the need to produce as many weapons as possible, as quickly and cheaply as possible. The difference in cost with Thompson was colossal. If one M3 cost the budget only $ 20 (in the prices of those years), then Thompson took about $ 260 apiece from taxpayers' pockets.

The weapon was so cheap that the United States did not even care about producing enough parts for this model. In this regard, the M3 was disposable. If, in battle, a soldier or a Marine encountered damage to a weapon, they could simply throw it away and wait for a replacement from the accumulated stocks. 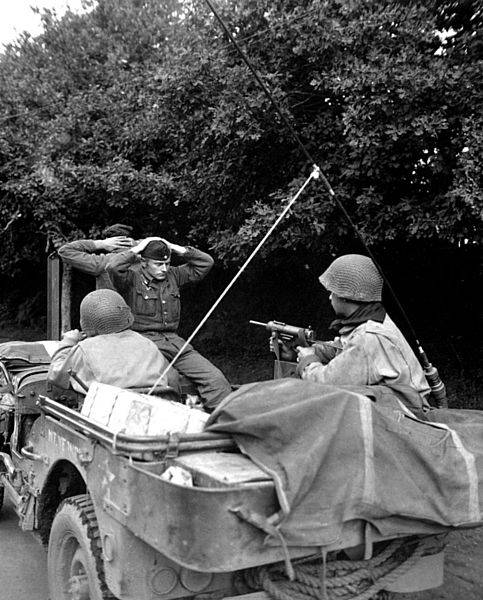 At the same time, already the first contract of December 1942 provided for the supply of 300 thousand samples of new small arms to the troops. The release of a new submachine gun was launched at one of the factories of the General Motors concern. In a peaceful life, this enterprise specialized in the production of car headlights. And he had extensive experience in the production of stamped parts, which turned out to be the best possible.

The replacement for Thompson was so successful that during the Korean War of 1950-1953, the M3 and M3A1 submachine guns were used more massively than the Thompsons of various modifications. The weapon, despite looking like it was bought from a hardware store on sale, has proven to be very reliable and practical.

The M3 submachine gun was built on a freewheel automatic. Weapons are fired from an open bolt. The body of the model was made of stamped steel. And the barrel was housed in a special sleeve, which simultaneously served as the front cover of the receiver.

A notable distinguishing feature of the submachine gun was the characteristic cocking handle, which the designer placed below the line of the barrel of the weapon. It was cocked by turning about a quarter of a turn back.

Later it turned out that such a cocking unit was not reliable enough, therefore, in the modernized version of the M3A1, it underwent changes. The cocking handle was replaced with a groove in the body of the bolt, to which the fighter clung with his finger and pulled the bolt back. 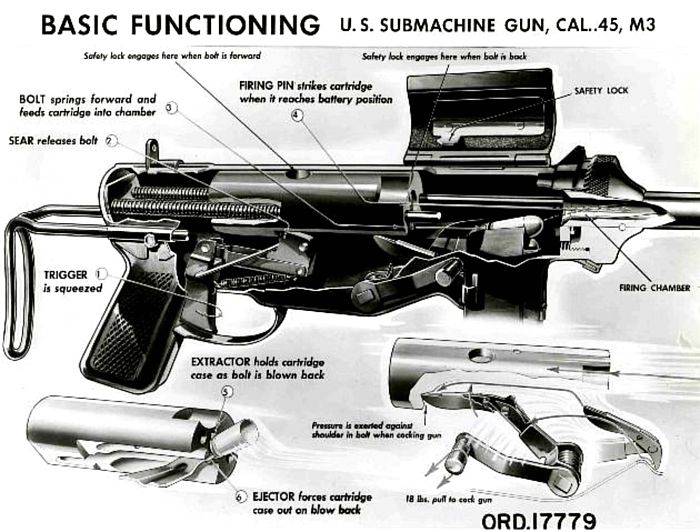 In the course of the modernization, the window designed for ejection of spent cartridges was also increased, through which the bolt of the submachine gun was cocked. The spring-loaded cover of the window for the ejection of the sleeves at the same time also served as a fuse. In the closed position, the cover could block the shutter in the rear or front position.

There were no complex sights on the model. These were the simplest non-adjustable sights, placed on the receiver. The sight was set at a distance of 100 yards (91 meters).

The stock was also as simple as possible, essentially a U-shaped piece of thick steel wire. Once removed from the submachine gun, the shooter could use the right stock rod as a ramrod.

In the rear of the butt of the M3A1 modification there was a special bracket that facilitated the process of equipping the magazines (sending cartridges to the magazine). The capacity of detachable box magazines was 30 rounds.

Another distinctive feature of the late M3A1 was a conical flash suppressor located on the barrel of the weapon. 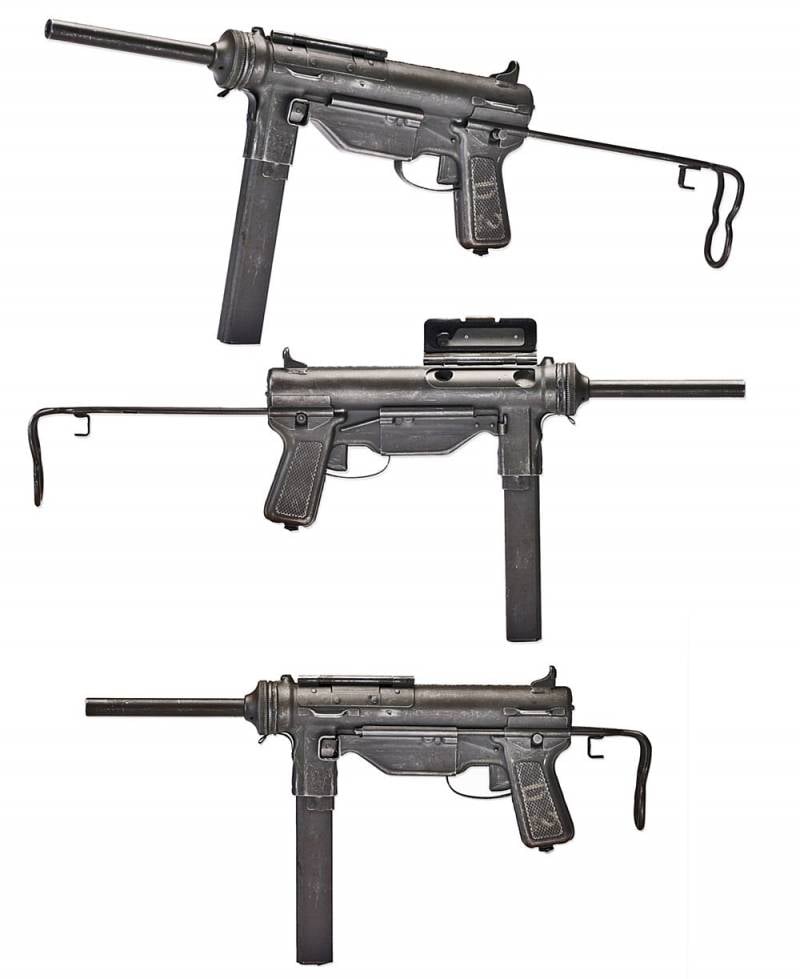 Tests of the "oiler" M3 in the USSR

The American submachine gun M3 reached the USSR by the spring of 1944. At the same time, weapons were tested at the GAU shooting range. The reaction of the Soviet specialists and the military, who took part in the tests of the novelty, was similar to the reaction of their American colleagues, who in 1942 were impressed with the test results.

In May 1944, the model was tested at the test site, paying special attention to the materials from which the submachine gun was made. According to the test results, it was indicated that the M-3 not only significantly surpasses the previous designs of American-made assault rifles (Thompson of the 1923, 1928 model, the M1 and M1A1 models, as well as the Reising M50), but also, in terms of its positive characteristics and technical features, can confidently be located in some of the best machines in the world.

Soviet testers were especially impressed by the fact that with a shorter barrel length in the M3, it was possible to maintain the same bullet speed. At the same time, the accuracy of fire for this model was at least at the level or even higher than that of the heavier and more massive Thompson, which also had a longer barrel with a compensator.

M3A1 submachine gun with flash suppressor
At the same time, the survivability of the weapon after 17 thousand rounds almost did not decrease. In this regard, the GAU even specially conducted a separate study of the barrel of the M3 submachine gun and the metal from which it was made.

Also in the USSR, they noted the tightness and dust resistance of this model. This was quite important, since the weapon retained its performance even in difficult shooting conditions. That is, it could have saved a soldier's life in real combat conditions.

Perhaps the USSR would even have ordered a batch of oil cans for the Red Army as part of the Lend-Lease program. But in 1944, the supply of small arms, especially submachine guns, was no longer a priority need.

At the same time, the Red Army managed to get the Thompson submachine guns in tangible sizes.

More than 130 thousand units of this small arms were delivered to the USSR.