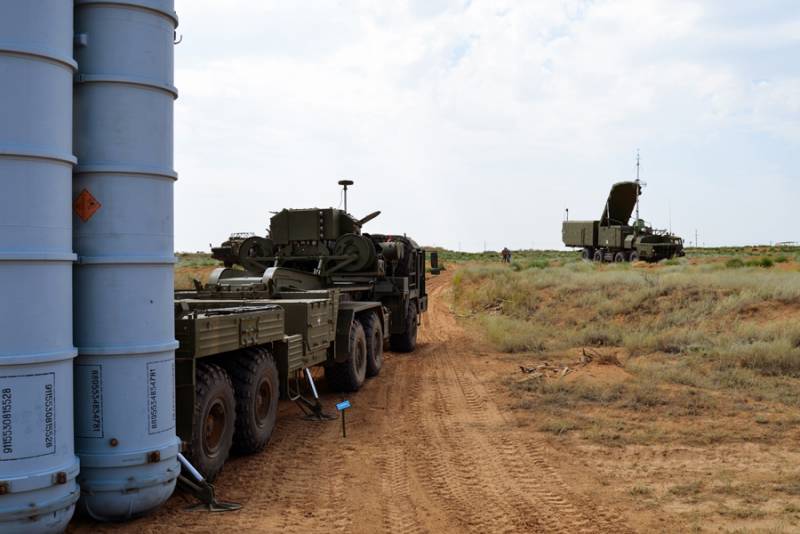 No matter what they say about our neighbor, Turkish President Recep Tayyip Erdogan, he is a really talented and cunning politician. A politician who knows how to clearly justify his actions and create conditions that push others to make decisions that are beneficial for Turkey. Yes, I do not like much of what the Turkish president is doing, and his terry nationalism and plans to create Turan resent me, but he is the president of his country and solves the problems of his country.

For several years now we have periodically admired his correct steps towards Russia, then we threaten all punishments when he finds a common language with our potential opponents on some issues. Remember Nagorno-Karabakh. No matter what we say, Erdogan has achieved his goals. And exactly in the volumes that he needed. At the same time, it did not cause outrage among the interested parties.

Today, the media are actively discussing reports from Washington and Ankara about the S-400 purchased from Russia. The Americans threaten with sanctions, the Turks quite harshly respond in the style of "you are a fool" and urge the United States to offer them more favorable terms than Russia has offered.

“We had disagreements with Russia on a number of issues, but we were able to resolve them through a constructive dialogue.

Why can't you do the same with the United States?

If another country addresses us from the position of maximalism and with the demand "either this way or not," then such an attitude forces us to look in a different direction. "

Let's remember how it all began

For many reasons today, for some reason, it is not customary to recall the events that caused the purchase of Russian complexes by the Turks.

I'll start with Erdogan's statement regarding the reasons for purchasing Russian S-400s:

“Ankara will agree to purchase American Patriot complexes only when Washington offers the same good conditions as Russia.

Russian S-400s, priced at $ 2,5 billion, are much cheaper than the American Patriot and are considered more modern and efficient. "
It would seem that everything is clear and understandable.

But we should remember those who pushed the Turkish Republic to such a decision. I'm talking about the Americans now.

Remember how several months before the conclusion of the contract, President Trump demanded at all sites not to conclude any agreements. Moreover, the threats were such that the impression was created that the United States would do anything to achieve its goal.

At the same time, Mike Pompeo constantly threatened to impose sanctions. And US Deputy Secretary of Defense for Logistics Ellen Lord threatened to expel Turkish pilots who are trained in the United States from the United States and to ban Turkish companies from participating in the production of F-35 fighters. Let's add here some of Turkey's economic difficulties, which were also created in many ways by the Americans.

Why did not all these gestures produce the proper effect on the Turkish president?

Yes, simply because Erdogan is a politician. And the purchase of the S-400 is a wonderful political move.

What would happen if Ankara had only American air defense systems? Could these systems have been able to repel an attack if Washington decided to "punish" Turkey?

And there was something to punish for. Especially on the issues of Syria. The United States has taken Kurdish rebels, whom Turkey considers terrorists, as allies in Syria and Iraq.

By the way, where did the Turks locate the Russian complexes?

Along the southern border!

And who is going to attack Turkey there? Except for a NATO ally, of course.

Simply put, Erdogan hinted to Trump that Turkey will defend its interests even from allies in the alliance.

Why is the question about the S-400 "Triumph" again raised today?

It would seem that the issue of Turkey's purchase of the S-400 Triumph was closed after the contract was signed and the Turks received the complexes.

However, the United States continued to put pressure on the Turks under Joe Biden.

The answer was given by the representative of the US State Department Ned Price at a briefing on February 9 this year:

they pose a threat to the security of technology and

they are not in line with the commitments that Turkey has assumed as a NATO ally. ”
In other words, NATO members are convincing Ankara that the use of Russian air defense systems and NATO aircraft at the same time may lead to a leak of Western technologies and some military secrets. Moreover, the United States understands that the S-400 are not compatible with Western systems, which means that it is impossible to control them "from Washington".

All means are used. From the imposition of sanctions against Turkey last December under the US Countering America's Adversaries Through Sanctions Act (CAATSA). Restrictive measures were introduced by the US authorities against the Turkish Defense Industry Directorate, its leader and three Turkish citizens. Before the talks between US Secretary of State Tony Blinken and his Turkish counterpart Mevlut Cavusoglu.

The Turkish President is playing a very risky game.

On the one hand, by annoying the Americans, he can get quite serious sanctions from the United States. You can remember how this will affect the country. To remember, not to imagine.

I'm talking about the consequences of the American sanctions against Turkish steel and aluminum products after the refusal to release Pastor Andrew Brunson from arrest. According to Turkish economists, it was these duties that caused the economic and financial crisis in Turkey.

On the other hand, if the S-400s already in service are decommissioned and abandoned, this will cause discontent in Moscow. Here, too, it is necessary to "remember the consequences." Remember the "funny sanctions" after the downed Su-24? They also talk about the global economic crisis. A Russian tourist and a Turkish tomato are stronger than a “haberdasher and a cardinal”.

But the Turk continues to take risks. He offers the Americans a deal when, in order to maintain their dominance in the arms market, they will have to provide Ankara with such discounts on weapons and military equipment that would "cover" Russian prices.

And at the same time, the Minister of Defense of the Turkish Republic Hulusi Akar openly declares that Turkey is ready to purchase another S-400 regiment. And negotiations about this are underway. It is clear that Russia must also make some concessions to the Turkish side on the issue of prices.

Why do we need such difficulties

It is clear that in parallel with the talks in Ankara, Washington is also working in Moscow. It is necessary to put pressure not only on the buyer, but also on the seller. It is clear that this is being done under the traditional American slogan -

"Nothing personal just business".
But is it only business?

Erdogan's interest is understandable. American complexes are weapons that will require huge operational costs, but will not offer prospects for the Turkish defense industry. The appearance of Russian systems in Turkey will entail new opportunities for obtaining technologies that will help create their own air defense systems. And the presence of Russian weapons gives the Turks some advantage in negotiations, for example, on new aircraft.

Russia (in this case) gets access to the markets of NATO member countries. After Turkey, other NATO countries are thinking about the effectiveness of their own air defense and the possibility of increasing it through Russian weapons. In addition, we get the opportunity to influence one of the major members of the alliance, which covers a fairly serious area of ​​the Middle East. NATO's unity is thus under threat.

Yes, Putin is playing a long game. For many it is incomprehensible. This is his style.

But the prospects for such a game are enormous.

No, we will not get a friend on our southern borders. Recep Tayyip Erdogan's nationalism will not disappear anywhere. And dreams of the great Turan too. But it doesn't really matter to us. We need a neighbor who will not hold a stone in his bosom. And this is the main thing.

In any case, a breakthrough into the NATO arms market is a victory.

Generally speaking, the normalization of relations with Turkey is a good sign.

In truth, even a slight "pushing" of NATO and the US away from our borders is not a bad thing.

Ctrl Enter
Noticed oshЫbku Highlight text and press. Ctrl + Enter
We are
Situational analysis of the death of the MH17 flight (Malaysian Boeing 777), made on the basis of engineering analysis from 15.08.2014Results of the week. “In our cooperative, the board is always agreed”
Military Reviewin Yandex News
Military Reviewin Google News
42 comments
Information
Dear reader, to leave comments on the publication, you must sign in.