Tsar-plane: how the first serial giant of the First world war fought 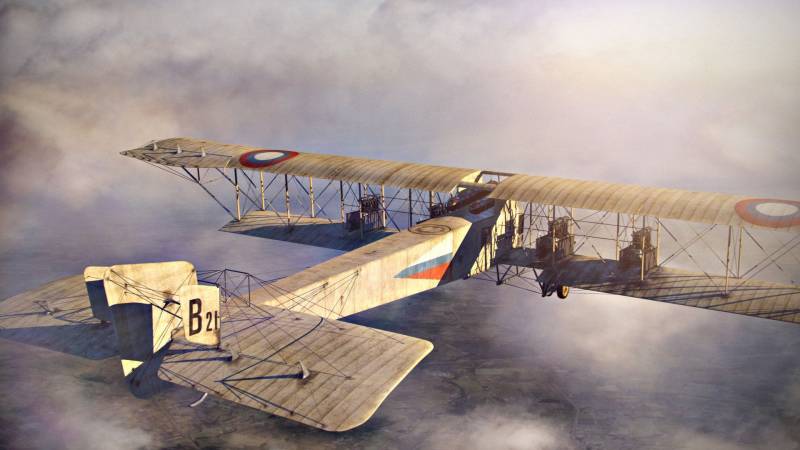 The weakness of the designer Sikorsky

Igor Sikorsky was a capable aircraft designer, but he had a weakness that could both help him and let him down - as, for example, in an attempt to create an airplane for the world's first non-stop flight across the Atlantic. The name of this weakness was the pursuit of comfort and gigantomania. But, if in the 20s, in emigration, she became Sikorsky across the throat, then shortly before the First World War everything turned out to be very useful.

The designer did not yet suspect what scale the military conflict would break out in 1914 - he drew in his imagination large-scale passenger air travel between major cities and even continents. The embodiment of these dreams was the four-engine "Russian Vityaz", the cabin of which resembled a city tram. By the standards of 1913, it was a giant - it could comfortably accommodate ten people.

In September of the same 1913, the "Russian Knight", however, ordered to live a long time. Moreover, the giant Sikorsky ditched in a very unusual way - at one of the airshows, a biplane was flying over the plane peacefully on the ground, from which the engine suddenly fell out. Yes, it is so unfortunate that it is definitely in "Vityaz". The wooden-linen structure could not be restored. 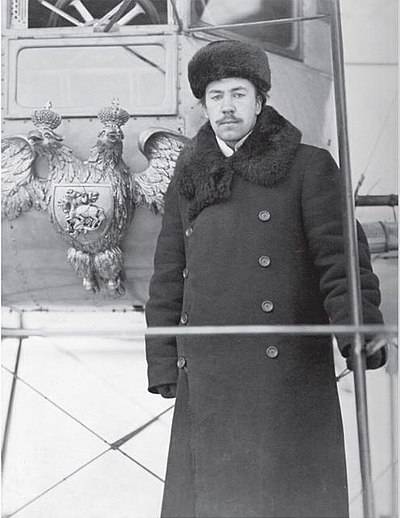 Sikorsky, who knows how to find good sponsors, did not lose heart - this was an opportunity to build another, more comfortable, plane. Fortunately, he knew in which direction to work - to build not a separate cabin, but a hefty one, coinciding with a rather big fuselage. This is how the Ilya Muromets was born - the prototype of the "classic" heavy bomber of both world wars.

The "Muromets" looked powerful: 4 motors, placed one after the other on a 30-meter wing. The scope of the latter, plus or minus, corresponded to that of some "Lancaster" - thousands of them will be destined to burn Hamburg, Dresden, Magdeburg and a number of other large German cities in the 40s.

The Achilles' heel of the aircraft was the foreign origin of the motors - the necessary engines of 140-200 horsepower could only be obtained abroad, and a teaspoon a day. It was not difficult to assemble the linen-wooden structure of "Muromets". But the engines were most often obtained cannibalistically - by disassembling damaged aircraft.

A total of 76 Muromtsev were built. But they could never be assembled in one place - because a new plane could most often be built only by removing the motors from the old one.

By the summer of 1914, the imminence of a major war in Europe had already become evident.

And Sikorsky's planes began to interest military customers. The first of these was, oddly enough, the fleet. The Muromets was equipped with floats, and the giant capable of landing on water began to look even more unusual.

True, the plane is long naval did not last.

At the very beginning of the war, they themselves ruined him, and in a rather non-trivial way. Once in the Baltic, off the coast of today's Estonia, the "Murom" had some kind of engine malfunction. To find out the cause of the breakdown in a more or less calm environment, the giant was put on water. And then suddenly on the horizon the silhouettes of some approaching ships or ships began to dawn. 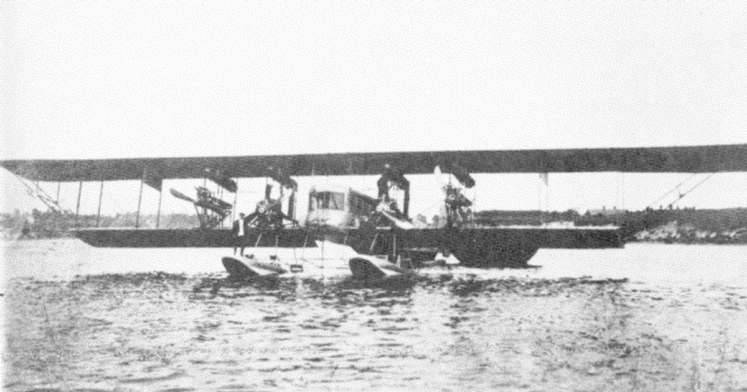 All this was reminiscent of the approach of the German destroyers.

The crew had already resigned themselves to being captured, but to do it with the aircraft in addition would be quite ashamed. Therefore, having plunged into the watercraft, the pilots finally set fire to "Muromets". Later, however, it turned out that the ships seen did not belong to the enemy, but the wooden-linen structure burned merrily and quickly. Therefore, throwing something to extinguish it was already pointless for a long time.

After this precedent, the fleet did not show much interest in Sikorsky's "air ships".

Whether it is the army. True, the initial design was damp, and the flying giant required very specific control training. Therefore, the Muromtsy were able to start bombing in earnest only by February 1915.

Attacking troops on the battlefield or even moving columns with clumsy heavy bombers would be foolish - and everyone understood this. Therefore, "Muromtsy" worked on strategic (as far as the range allowed) objects. Although, by today's standards, they would be classified as operational goals.

The best object of application for four-engine bomb carriers was considered to be railway junctions - large enough objects that will definitely not run away anywhere. I don’t want a bomb.

The effectiveness of the raids was different. But in successful raids, the resulting fireworks could be seen from afar. For example, in June 1915 "Muromtsy" attacked Przhevorsk. In addition to the station itself, a German echelon filled with shells was hit by bombs. The shells that day exploded long and colorful. 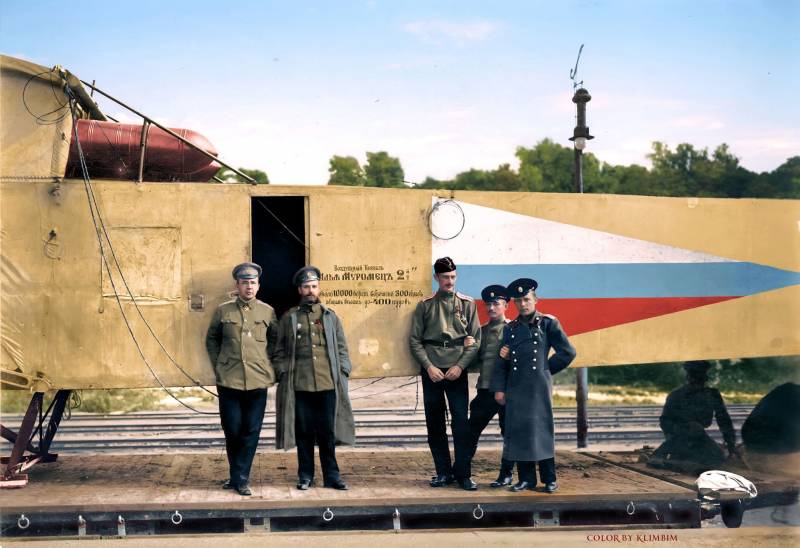 Recolorized photograph of "Muromets" during the First World War

"Ilya Muromets" could take from three hundred to five hundred kilograms of bomb load, depending on the power of the motors installed on a particular board.

During the entire First World War, these bombers flew three hundred sorties. And again here the very strength and weakness of the Russian Empire, with which we began our conversation, manifested themselves.

The plane was breakthrough at the time of its creation. An excellent concept of application, real significant combat successes. And - only 300 flights. By the standards of some Englishmen or Germans - to chickens, to be honest, for a laugh.

The reasons are predictable - a lack of engines and a high accident rate. At the same time, there were so few aircraft that there was a constant squabble between the crews - for whom the newly built on the basis of the old, many times wrecked, patched-repaired engines would be assigned.

The empire that gave birth to "Muromtsy" collapsed under the weight of its own and practically unavoidable problems. The airships lasted a little longer - long enough to take part in the Civil War. Although the path to the latter for some crews turned out to be very, very thorny.

By the beginning of the great Russian turmoil, the "Muromtsev" squadron was based in Vinnitsa.

The decomposition of the army went by leaps and bounds, and the pilots flew inland. In the conditions of the collapsed discipline, one could not count on the long-term preservation of the front. And it was at least about the fact that the four-engined machines did not go to the enemy.

The crew of Joseph Bashko decided to leave in February 1918. The original target was Smolensk. But "Muromtsy" were considered emergency vehicles for a reason - the plane barely made it to Bobruisk. They sat right in the clutches of the Polish troops. Those, however, treated the pilots favorably - the personnel are still rare. Therefore, the crew of Basko, together with the bomber, joined the ranks of the armed forces of the young Polish state.

Perhaps Bashko would have stayed there, but by May the situation had developed in such a way that the unit to which our hero's "Muromets" was assigned decided to disarm in front of the Germans.

This meant that the plane would be handed over to a former enemy or (at best) destroyed. At the same time, the prospects for Bashko himself were very vague. Therefore, he decided to follow the example of one of the characters in Russian folk tales: he left those, and I will leave the others. And Bashko flew to a new, already Soviet, Russia.

He did it, but only partially - "Muromets" again refused to air. The landing was hard - the plane crashed. But Bashko himself survived. And even managed to fight for the young Red Army in the Civil War.

By the way, the red Muromets were appreciated. And even restarted their build. True, it was not about a full-fledged production, but only about the completion of the backlog formed during the First World War. But in the meager conditions of the Civil War, this was already a serious contribution.

In the Red Army, the four-engine giants worked not only at railway stations - the armies of the Civil era, especially the white ones, were much less dependent on them. They tried to use aircraft against mobile targets like armored trains and Mamantov's cavalry. And the results, of course, were more modest than in the First World War. But, again, it still fit perfectly into the logic of the Civil War -

"better than nothing".
In 1920, one of the "Muromtsy" nearly put a fat point in the life of the white general Turkul, at the same time killing his beloved dog, a French bulldog named Palma.

But the Civil - the last war of these heavy bombers - was coming to an end.

They tried to find a new application. For example, it can be adapted for postal and passenger transportation. But this occupation was not for the faint of heart - "Muromets" was famous for its accident rate before. And in the early 20s, when the technical condition of the tortured engines was very sad, to climb into it, special courage was required.

The last flight of "Ilya Muromets" took place in 1923.

After that, the traces of these air ships of the Russian Empire were cut off completely.

All that remains of them today is a handful of individual artifacts, a hefty stack of photographs, memoirs of those involved, and surviving documentation.