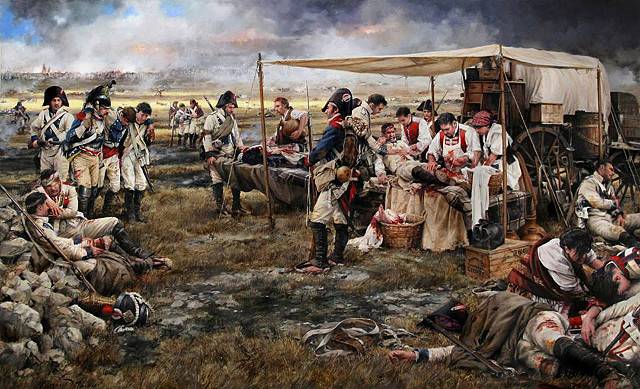 The price of victory.Painting by Augusto Ferrer-Dahlmau shows the working conditions of field hospitals during the Napoleonic era.

After preliminary dressing by battalion surgeons, the wounded were taken to the infirmaries, where they received first surgical aid. Such hospitals, according to the rules developed during the revolutionary wars, were established

"A mile from the battlefield."
And the surgeons began to provide medical care by searching for the wounded on the battlefield after the volleys of the guns had subsided. The luminary of the then medicine, Dominique Jean Larrey, already in 1792 noticed that such rules were absurd. And he and his staff tried to get as close as possible to the fighting troops.

The rules were gradually changing.

And in the era of the First Empire, it was already decided that hospitals set up assembly points (deposit) in the middle of the battle formations with the simultaneous dispatch of auxiliary squads to the flanks. In principle, there was one infirmary per division and one hospital per corps.

The surgeons of the Grand Army understood that after 36 hours the wounded had no chance of surviving due to blood loss and gangrene. Therefore, in conditions of slow transport or the absence of such, the rule was applied that any dangerous wound or fracture should lead to amputation of the limbs. Due to lack of time and money, no treatment attempts were made.

And contemporaries write (as a kind of curiosity) about cases when the wounded refused to amputate. And in the end, the swearing surgeons, in spite of everything, agreed to treatment.

The typical surgeon was required, first of all, to be able to do amputations. At the same time, such physical endurance and skill was required so that a surgeon could amputate several dozen arms and legs per day. Some, like the same Larrey, could amputate up to 150 limbs, of course, with the help of qualified personnel.

After the Battle of Preussisch Eylau, a main hospital was established in Herzberg. Then, for the first time, to facilitate the work of surgeons, the wounded began to be sorted by type of injury, sending those who were to have their arms amputated to the right, and those who should have their legs cut off to the left. Thus, the surgeon could perform the operation in a few minutes.

No anesthesia existed at that time. The wounded were simply drunk with vodka. And for those who, in spite of everything, retained consciousness, a lead bullet was put in their mouths to bite it, and thus somewhat drown out the pain.

Some particularly gallant soldiers demanded that lighted pipes be inserted into their mouths. This required special self-control, since the jaws, which were brought together by pain, were able to easily bite the pipe shank. Among the soldiers, however, there was a widespread superstition that to bite the pipe or let it out of the mouth was a bad omen, indicating that the patient would not survive the coming night.

If the army was advancing, operations could even be carried out in infirmaries. On retreating, the picture looked somewhat different. Then surgeons often operated directly in the open air, at best under a charging box or supply van. In such conditions, for example, Larrey amputated the leg of General Jozef Zajoncek, who was wounded on the crossing over the Berezina.

The amputations were carried out using an ordinary saw, which could be purchased from any artisan. With a dexterous circular motion, the surgeon incised the skin and meat below the amputation site. Then he cut the muscles from the bone, exposing it and creating some "reserve" of tissue. After sawing off the limb, this made it possible to cover the wound with meat and skin.

Hospital operating rooms (if, in general, it would be appropriate to call the random rooms where surgeons organized their "workplace") after several hours of continuous amputations looked terrifying. Piles of severed arms and legs gathered around the operating tables, which, as a rule, were not removed until the surgeon had finished his work. The surgeons themselves, even in aprons, were covered in blood from head to toe.

This had a terrible effect on the psyche of the soldiers: both those who were to undergo a "course of treatment" and those who delivered the wounded.

After amputation, the wounded were loaded onto carts covered with hay or straw and sent to second-line hospitals, or (as they were also called) permanent hospitals.

In theory, such hospitals should have been organized along the route of the army as it moved forward. In practice, this principle has rarely been applied. And the wounded had to be taken to remote areas, sometimes several hundred kilometers away.

For example, the wounded near Preussisch Eylau were taken to Elbing, Marienburg and Danzig. And the wounded at Friedland were sent to Thorn, Warsaw and even Berlin.

Permanent hospitals were best organized in large cities with churches, monasteries, palaces, and large public buildings. Therefore, most of the wounded near Austerlitz ended up in the hospitals of Brunn and Vienna. And the wounded near Pultusk and Golymin ended up in Warsaw. The wounded in the Iberian War had to be transported to several dedicated hospitals in Madrid, Zaragoza, Burgos and Valladolid.

Conditions in these hospitals were generally appalling. They had no beds or even mattresses or senniks. They just scattered hay or straw on the floor without changing it for weeks. Due to the lack of space, the wounded were placed in twos on the couch. Moreover, they could lie for hours next to the dead or dying.

Other eyewitnesses of the era wrote in their diaries and memoirs that they were robbed by orderlies in hospitals. Most of the hospital staff viewed their distribution as an opportunity to enrich themselves. Sometimes Napoleon and his generals handed out to the wounded several coins of "lifting" money. Some fortunate ones could take their packs of war booty from the battlefield.

The situation was aggravated by the general and systematic theft of the military administration. Military hospitals were subordinate to her. And she was obliged to provide the wounded with bed, food and medicine. In the meantime, the commissioners in charge of the hospitals themselves enriched themselves at their expense. Lack of supplies, food and medicine was common.

It is not surprising that many of the wounded (if only their condition allowed or comrades came to their aid) preferred to avoid hospitals. And keep to their shelves, moving in transport vans.