“Let it be so,” said the mandarin's daughter. “You, Kwon-Si, will rebuild your walls for the last time in the semblance of the wind itself, no more and no less. We will build ours in the likeness of a golden serpent. The wind will lift the kite to amazing heights. And he will destroy the monotony of the wind, give it purpose and meaning. One is nothing without the other. Together we will find beauty and brotherhood and long life. "
("The Golden Serpent, the Silver Wind" by Ray Bradbury. Translator V. Serebryakov)
It has always been and will always be that, along with famous inventors, dozens, if not hundreds, of those who are not inferior to them, but ... just less successful, who “were simply unlucky”, lurk in their shadows. One such inventor-gunsmith was Andrew Borges, the same age as Tyler Henry and Oliver Winchester ... 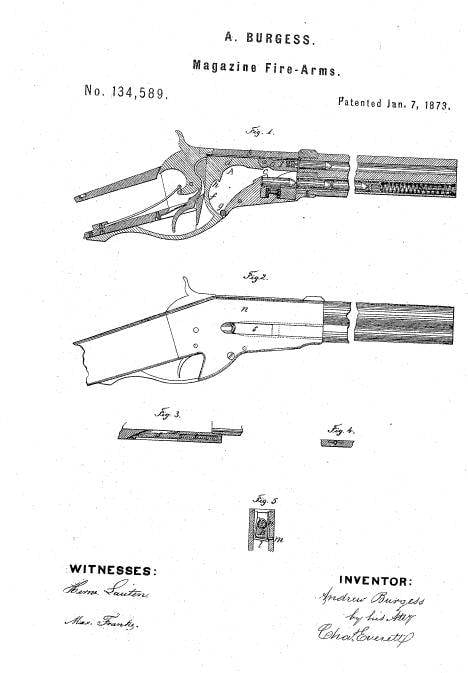 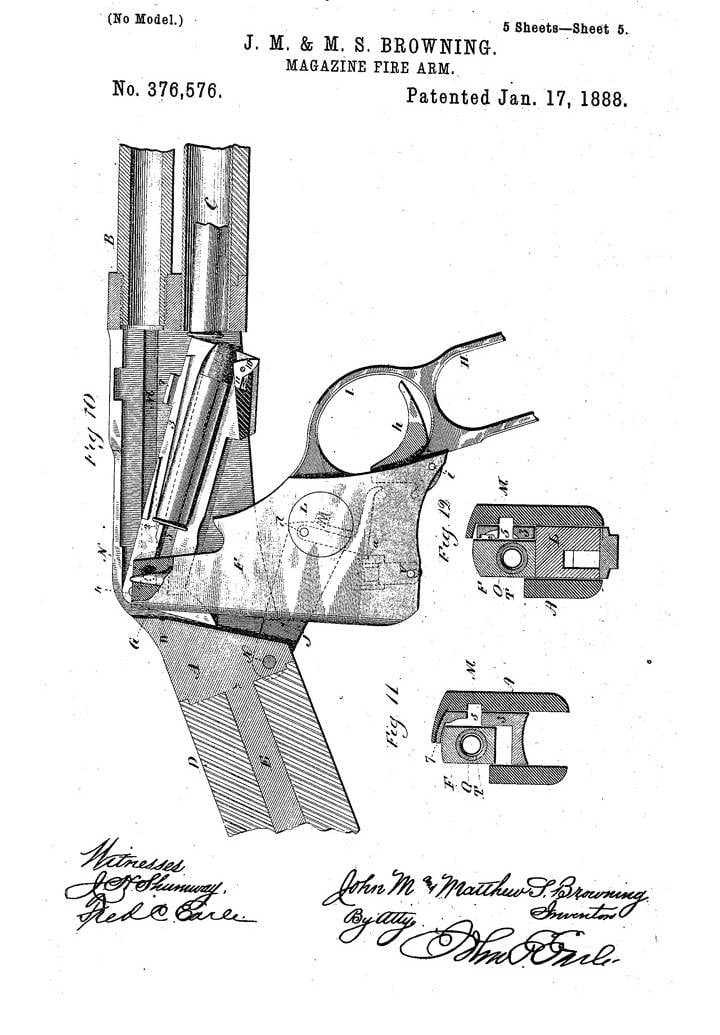 Interestingly, the legendary John Browning also patented something similar in his 1888 patent.
Weapon and firms. There was a sequel "about Winchester" - a story about rifles from "Marlin" company, and people immediately wanted "about savage" and "about borjess". But here it is: about the rifles of the company "Savage" (or "Savage"), my material on VO was (This weird Mr. Savage: rifles and gun), and this article also had a sequel, but this time about the pistol. So I will hardly be able to add something more interesting to the story of 2019. But it is simply necessary to tell about Andrew Borges, as well as about his rifles, even if they are not so much known as the same "marlins" and "Winchesters". The man had a very interesting fate, and he came up with interesting and unusual designs ... 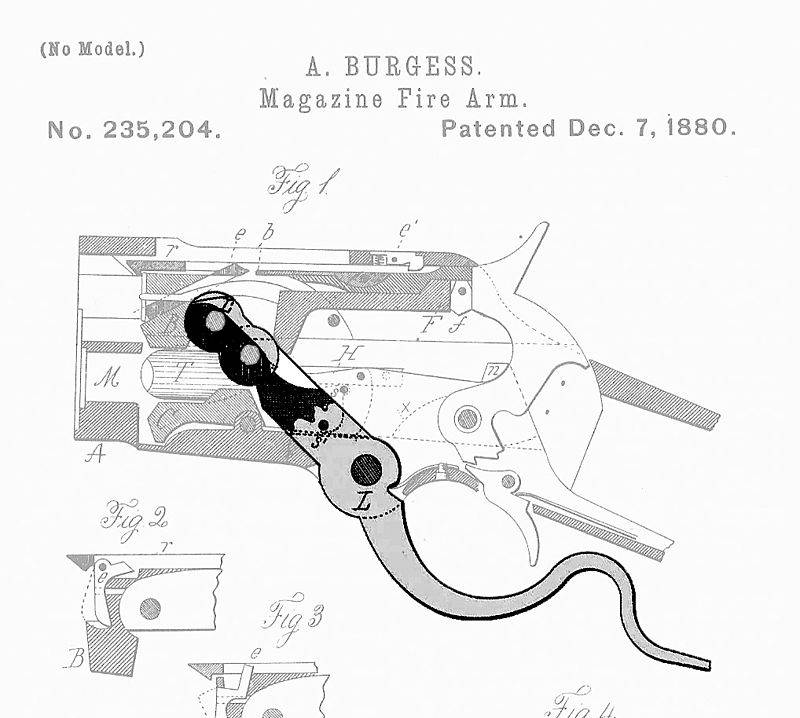 Burgess lever rifle patent of 1880, which became the basis for the production of Colt Burgess carbines
With 894 patents on his hands, Andrew Burgess (1837-1908) is one of the most prolific firearms inventors the world has ever known (second only to John Browning in the number of firearm patents granted to Americans) and a man of all kinds of talents. except for the design of firearms.

He was born on January 16, 1837 in Dresden, New York, the son of John Christian Burgess and Ahsa Christie (Davis) Burgess and was the grandson of a Hessian deserter during the American Revolution. He was an accomplished photographer whose family farm bordered the estate of Civil War photographer Matthew Brady. As a result, Burgess became an apprentice to Brady and filmed the entire Reconstruction in the south of the country after the Civil War, and also documented the execution of Emperor Ferdinand Maximilian in Mexico. It is believed that it was Andrew Burgess who took the famous Brady photograph of Abraham Lincoln, which is on the American five-dollar bill.

Colt Burgess with a round barrel. Weight 3,9 kg
Burgess later photographed the Franco-Prussian War of 1870-1871 before returning to the United States. It is assumed that during the Franco-Prussian War, when he worked as a photographer, he developed an interest in firearms. Moreover, he received his first patent already on September 19, 1871, and it proposed converting the Peabody and Werndl rifles into store rifles.

Colt Burgess with an octagonal barrel. Weight 4 kg. Typical length 1,090 cm. Barrel length 610 mm. .40-40 Winchester cartridges. Magazine capacity 15-12 rounds. In total, 2,556 copies were made.
When times fell on Brady in 1874, Burgess bought his photo studio, but then sold it back to him in 1876. At the same time, being a photographer, he took several photographs of famous Americans at that time. Among them were: Edwin McMaster Stanton, Secretary of War; William Pitt Fessenden, Secretary of the Treasury; General Winfield Scott Hancock.

At the time, Colt was known for its revolvers and Winchester for its lever-action rifles. But in 1883, it was Andrew Burgess who presented Colt an improved model of a lever action rifle, essentially similar to the M1873 "Winchester", only several important improvements were made to it that made it more accurate, reliable and durable. 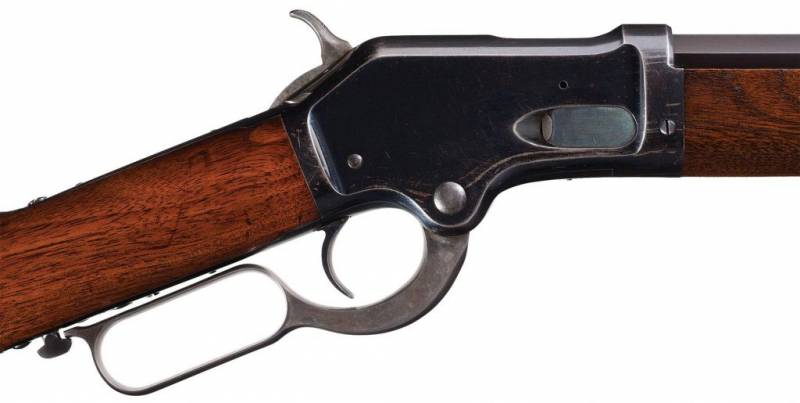 A noticeable difference between this rifle and the "Winchester" is the side door for loading cartridges, which is significantly shifted forward, since the receiver of the Burgess is much shorter. In addition, it is arranged differently ...
It is clear that Winchester was unhappy with the competition from Colt. Shortly after production began, Winchester met with Colt representatives and showed them some of the Myson revolvers they intended to put into production. Such competition was disadvantageous to both firms. Therefore, an agreement was reached between them that if Colt did not make rifles, then Winchester would not produce revolvers. So the production of the Colt-Burgess rifle ended just 16 months after it began, and has never been resumed. When it ceased, the total volume of Colt Burgess rifles and carbines produced was only 6403 units, and all .44-40 caliber, of which about 340 were sent to the company's London agency. True, the price of "Colt" and "Winchester" was different. Thus, the M1873 Winchester carbine of the year had a price of $ 17 and 50 cents, while the Colt Burgess carbine cost $ 24. But here a lot depended on the seller's ability to persuade the client ... 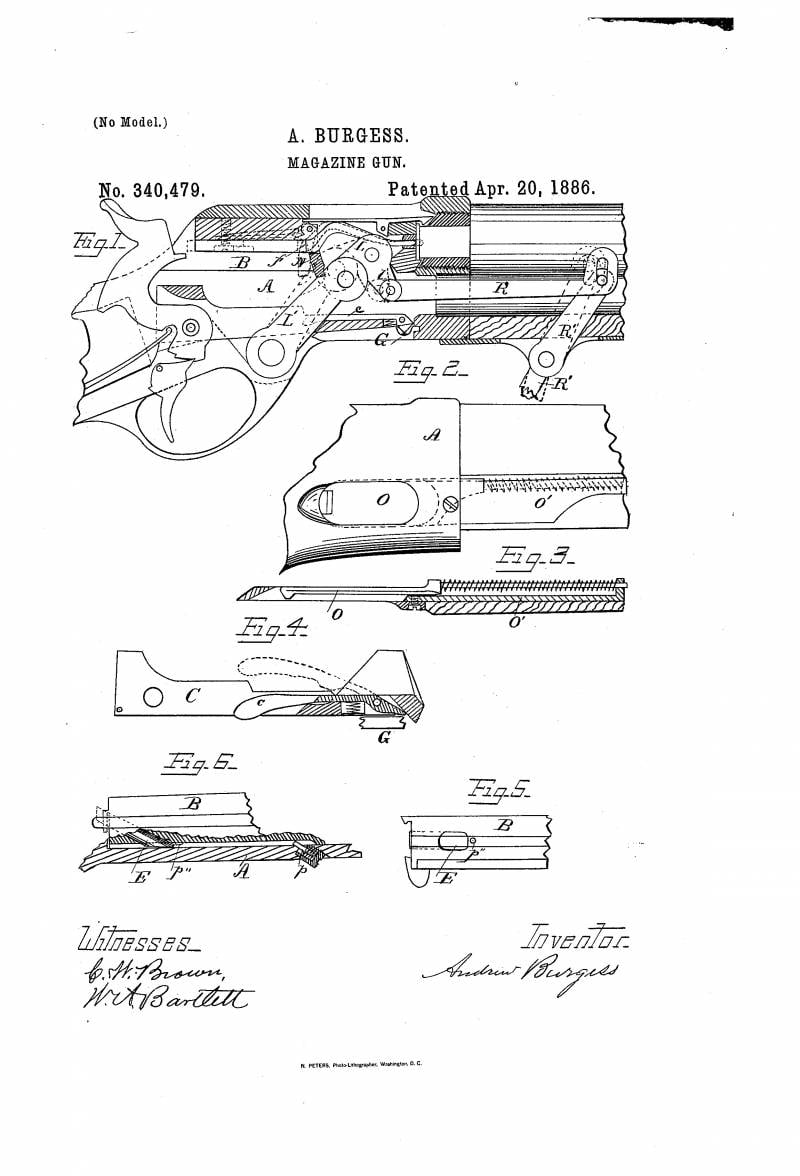 If in the "Winchester" the door cover was squeezed out by a cartridge, then in the "Burgess" it moved forward, and cartridges were inserted into the opened hole. This diagram from the patent of 1886 clearly shows how exactly this door was arranged.
Andrew Burgess then collaborated with Eli Whitney to develop a lever action rifle chambered for the .45-70 Government. It was hoped that this gun on military tests in 1878 will show its best side and will be adopted by the army. However, this did not happen, although Whitney continued to release her sports and military versions.

Here is this rifle with a bayonet. (Photo by Amoskeag Auction Company, Inc)

And this is one of Whitney's rifles ... ("Whitney-Scarf", to be precise)
In 1881, the Marlin Firearms Company introduced to the market a magazine-type carbine with a lever mechanism of the 1881 model, all its key features were patented by Andrew Burgess. This rifle was produced in various calibers from .32-40 to 45-70 Government.

Then in 1892 Burgess founded his own arms company in Buffalo, New York. His company was called the Burgess Gun Company, and produced shotguns and bolt-action rifles controlled by a unique pistol grip, albeit only until it was bought by the Winchester Repeating Arms Company in 1899. Winchester would usually buy competing firms and then shut them down. 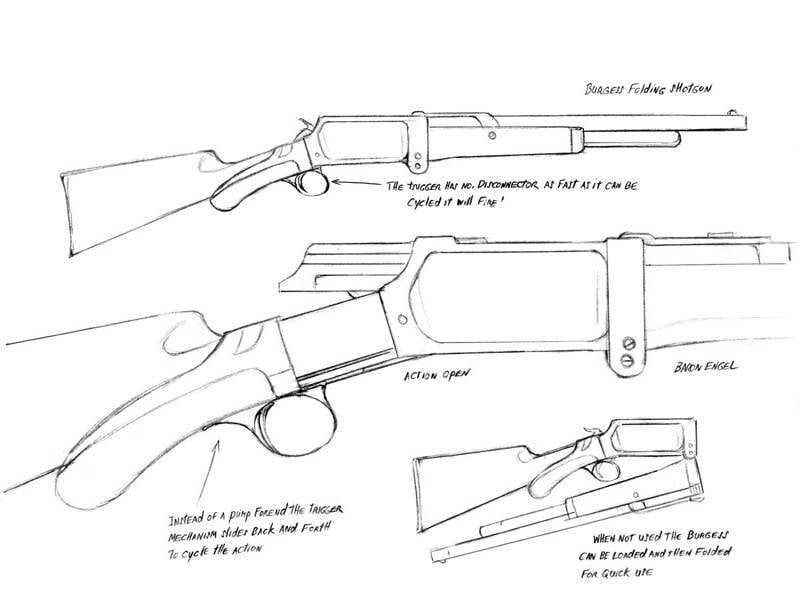 And then Andrew Burgess came up with this: a smooth-bore 12-gauge six-shot breakable carbine!
One of the most notable types of firearms, resulting from hundreds and hundreds of patents granted by Burgess, was a collapsible smoothbore rifle designed for police, courier services, prisons and banks. It was produced by his own company from 1892 to 1899. 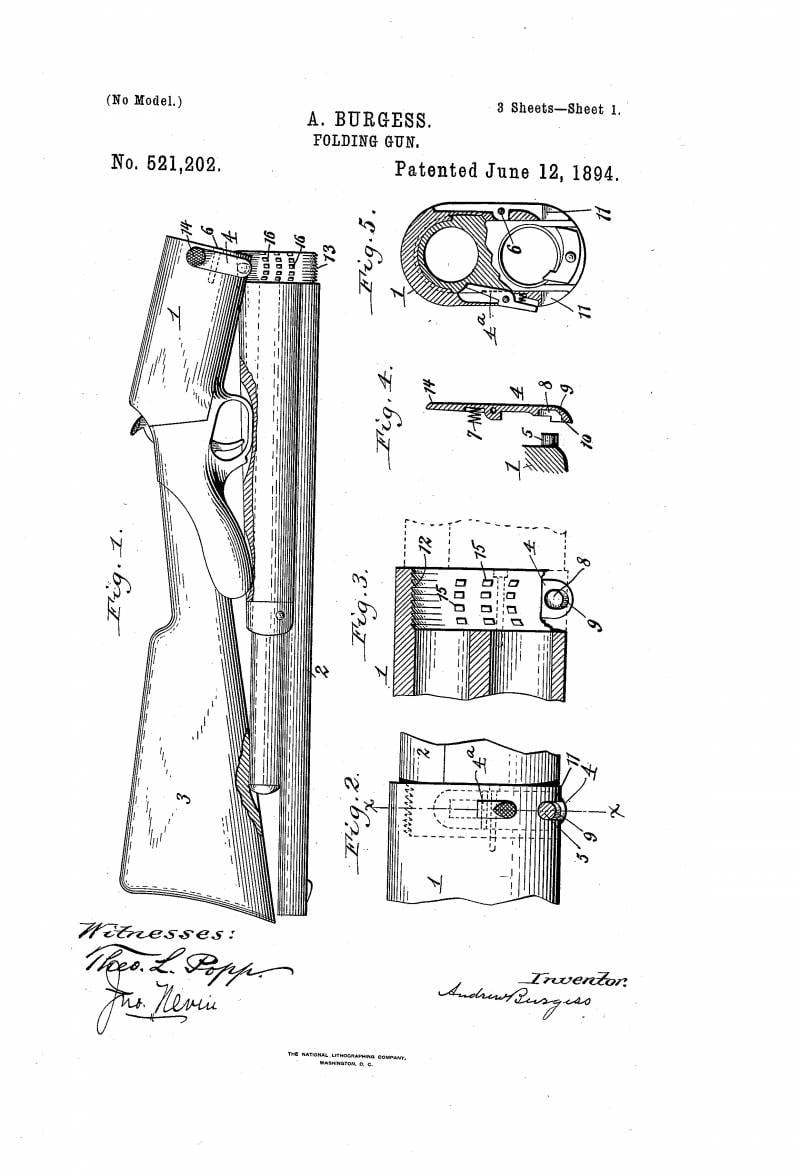 The appearance of the gun according to the 1894 patent
In fact, it was a pump-action shotgun that had a movable semi-pistol grip that moved back and could just as quickly be pushed forward by the shooter. And it was connected by a thrust to the shutter! Six shots in less than three seconds - this was its rate of fire with a magazine filled with cartridges, but most users appreciated its other quality: compact storage when folded. With a special holster, this folding gun could be carried under a coat, and then quickly removed and instantly activated. 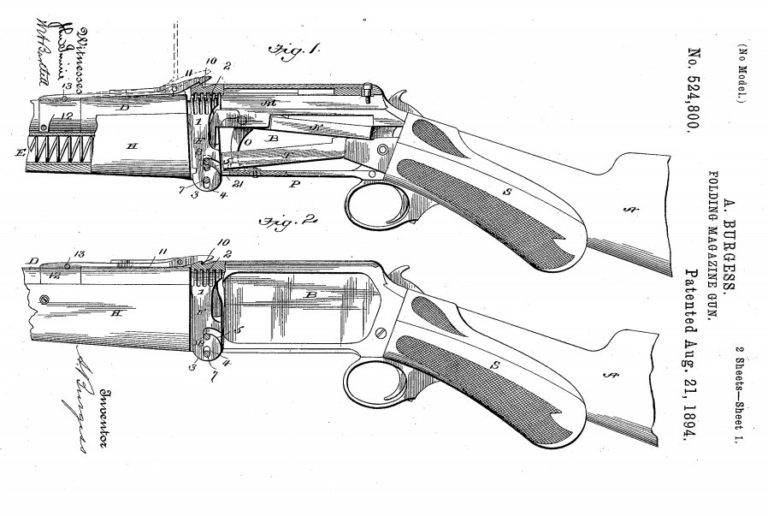 "Filling" of the receiver. Patent 1894
Well, for the first time his folding gun was put into production back in 1884. The magazine could hold six rounds, the barrel length could be 19-20 inches. The mechanism of this gun is interesting, which remained the only such system in stories... An iron sleeve was put on the neck of his butt, which just actuated the bolt. There was a lifting lever on top to free the barrel and fold it. A leather belt holster relied on each gun. 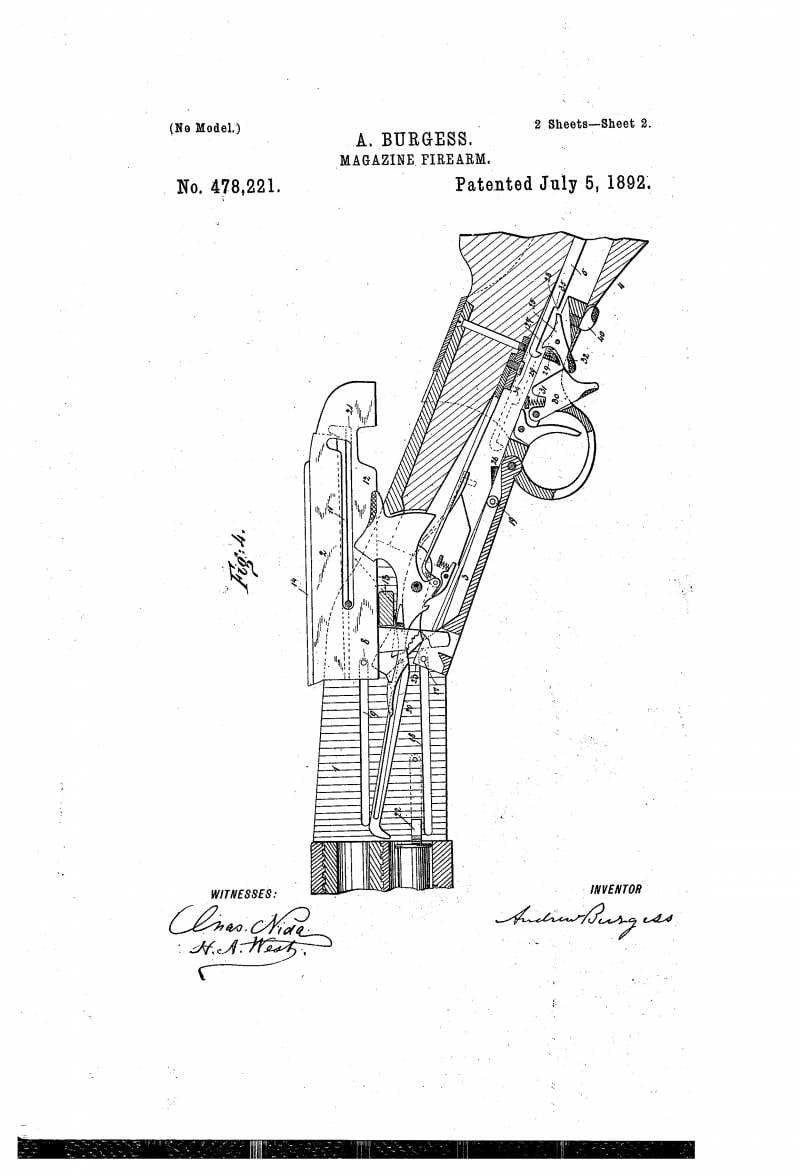 Sliding butt-neck device. Patent 1894
These guns were available in Arkansas, Texas, Oklahoma, and New Mexico. It was advertised as a specially designed weapon for police and courier services such as Wells Fargo couriers, US marshals, prison and bank guards. 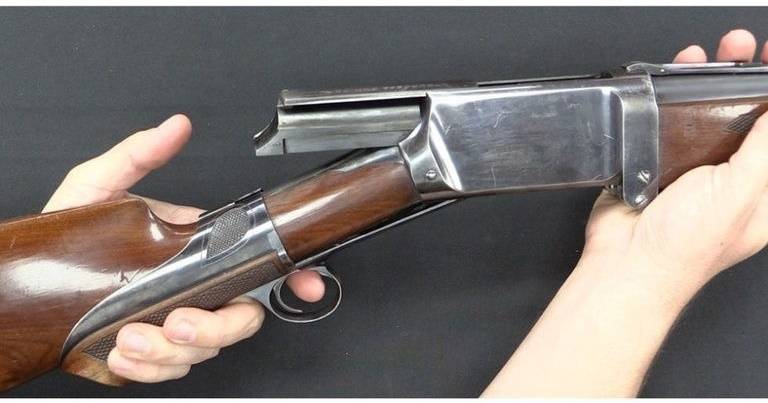 And this is how this gun worked! (Photo from Popular Mechanics magazine)
The shotgun was also used by police and prison guards in New York City. In 1895, one of Burgess's salesmen came to the office of New York Police Commissioner Theodore Roosevelt with the Burgess hidden under his coat. He pulled it out and fired six blank shots at the ceiling. Roosevelt was impressed by this demonstration, and he immediately ordered this gun for the guards at Sing Sing Prison. 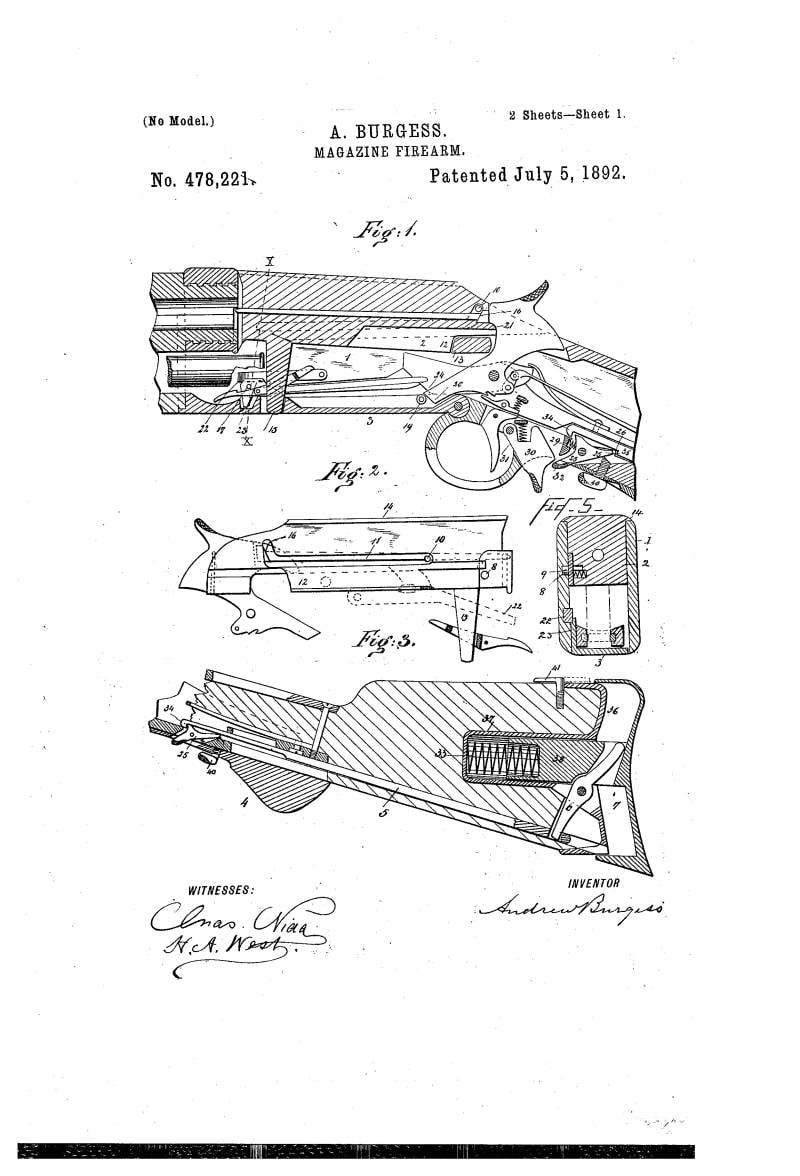 Burgess patent 1892. One of the attempts to use the recoil force to reload the gun
Although these shotguns were primarily produced as shotguns, some were also produced for rifle calibers. And it turned out that this folding gun is very convenient for law enforcement agencies, which just needed such a compact weapon. Another reason: powerful damaging characteristics. Thus, a buckshot shot at a distance of 40 yards left the criminal no chance of continuing resistance! 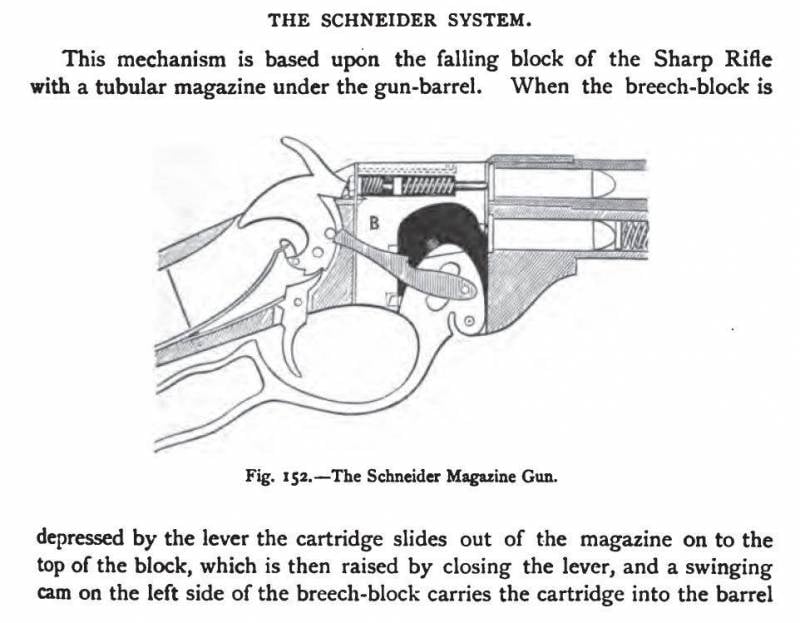 By the way, a lever rifle developed by Schneider on the basis of the Sharps rifle should have had an even shorter receiver. Her shutter did not move, but rose up along the grooves ...
According to writer Mark Lee Garner in "To Hell on a Fast Horse," the famous Pat Garrett (famous American Wild West law enforcement officer, bartender, cowboy, buffalo hunter and customs agent, best known for killing the famous mobster Billy Kidd) was armed with a Burgess when he was killed on February 29, 1908, during a dispute over a plot of land.

Only three engraved rifles were made and one of them (serial number 285) was donated to William F. (Buffalo Bill) Cody. On the side of the frame is Cody riding a horse, shooting a bison with a Colt Burgess rifle. Thus, the eye-catching design and lever-action reloading system, as well as the fact that one of these rifles was once owned by Buffalo Bill himself, greatly increase their appeal. This copy was sold in September 2018 for $ 109,250
Burgess is remembered by his contemporaries for his unique method of work, as he, while in St. Augustine, Florida, used to work in a floating workshop next to a beach bungalow. When stress gripped him on the shore, Burgess raised the anchor and floated with the flow, playing his favorite violin and ... periodically firing a shotgun to ward off the seagulls that annoyed him. 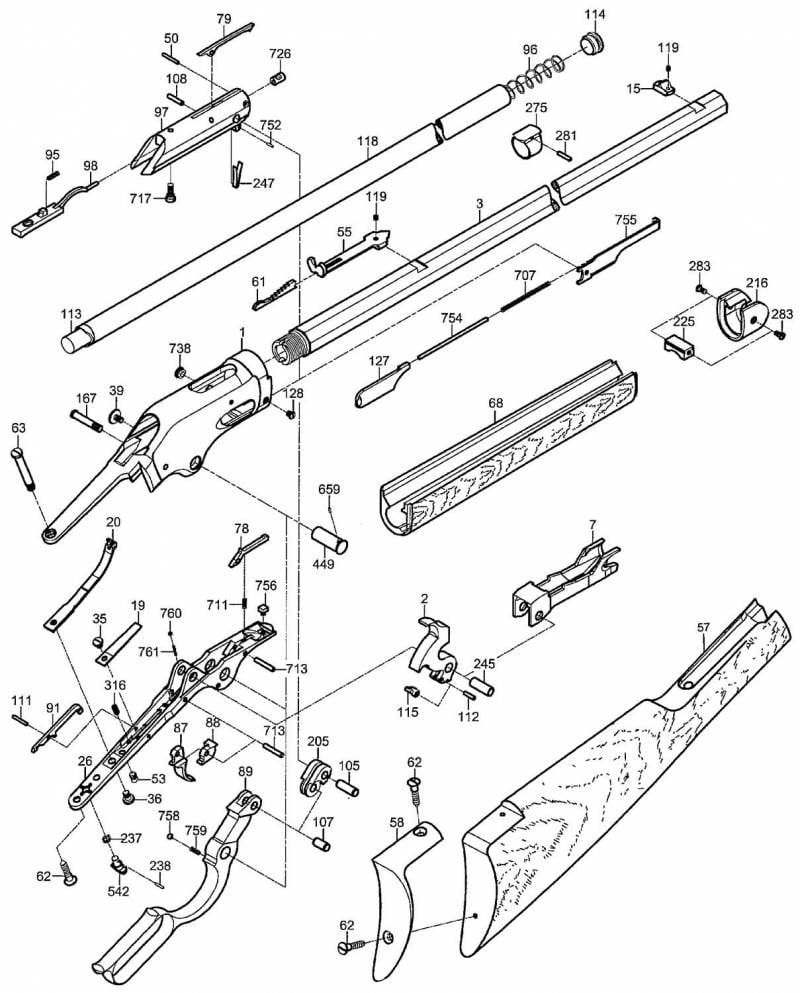 The device of the Uberti Colt Burgess rifle
The last patent was granted to Burgess in 1906, and he died of heart failure on December 19, 1908, at the age of 71.