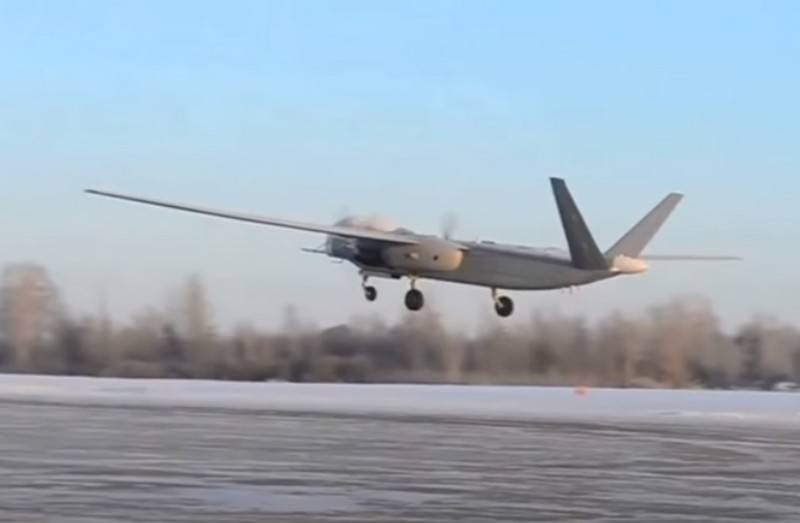 The Russian reconnaissance and strike drone "Altius" will be tested using the entire spectrum of guided weapons. It is reported by RIA News with reference to a source in the military-industrial complex.


According to the source, in the summer of 2021, a series of tests of the Altius UAV will be carried out to use the entire range of high-precision weaponsincluding rockets designed specifically for the drone. The strikes will be practiced against typical targets: Tanks, artillery, accumulation of manpower, shelters, etc.

Test flights of the Altius prototype are scheduled for the summer of this year, with the first airstrikes on targets at ranges with air-to-surface guided weapons, including high-precision guided missiles and guided bombs from the complex developed specifically for UAVs.
- said the source, adding that tests of conventional free-fall bombs from a drone have already been carried out and recognized as successful.

In mid-February of this year, it became known that the Ministry of Defense had ordered a pilot batch of Altius drones, the delivery time was not disclosed.

Altius-U "is the final appearance of the drone, created as a result of the development and testing of a number of prototypes within the Altair project. The newest unmanned complex is capable of performing the entire range of reconnaissance missions, as well as using aviation means of destruction. In February 2020, it was reported that a drone of high-precision gliding bombs 9-А-7759 "Thunder" was received by the drone.

UAV Altius has a wingspan of 28,5 m, a length of 11,6 m, and take-off weight of 6 tons. The flight altitude is 12 thousand meters, the flight range is up to 10 thousand km. In this case, the UAV can be in the air for up to 48 hours. The installed equipment allows reconnaissance at a great distance. The drone can also be controlled via satellite, which makes its range almost unlimited.

Ctrl Enter
Noticed oshЫbku Highlight text and press. Ctrl + Enter
We are
The Ministry of Defense has ordered a pilot batch of Altius-U strike-reconnaissance dronesReports from the militia of New Russia for 27-28 September 2014 of the year
Military Reviewin Yandex News
Military Reviewin Google News
75 comments
Information
Dear reader, to leave comments on the publication, you must sign in.