The middle men who attacked the Tirpitz!

March 13 2021
20
An interesting plane. This is not to say that he was outstanding. It wasn’t the best of the best, but it was a pretty good plane that just had no luck. And all his goals and objectives were, no offense will be said to this machine, secondary. Except for one. But first things first. 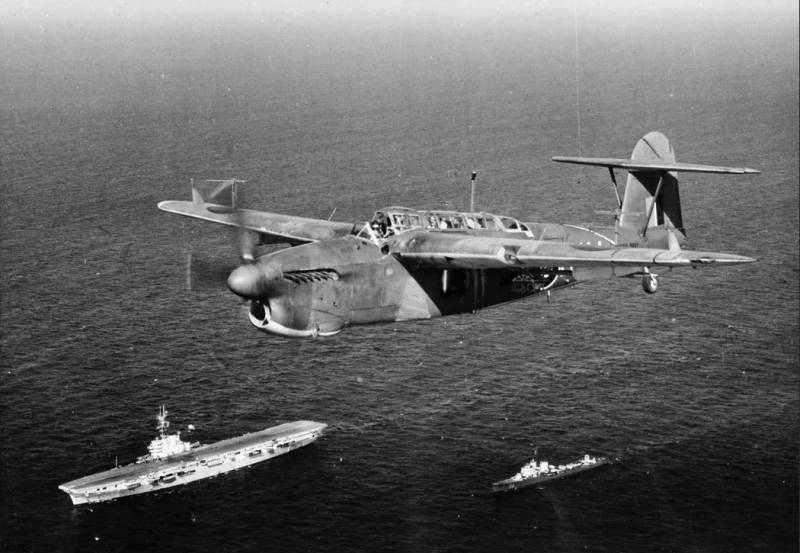 British Royal Naval aviation in the person of her command, she understood that she was not keeping up with the modern requirements for aircraft. But in an amicable way, it was necessary, "Suordfish" is clearly outdated, and the new "Albacor", which was made by the same firm Fairey, was called "Suordfish", on which it is more difficult to catch a cold. Hinting that the plane has a closed lantern, but in all other respects it is the same "Suordfish". 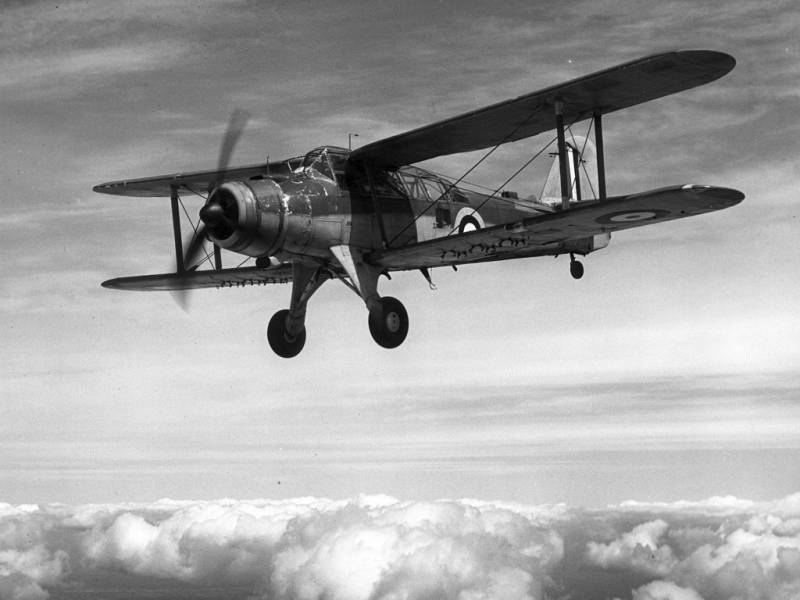 However, Fairey understood that the fleet you need a good strike plane. And the firm began to develop aircraft for engines of 1000, 1500 and even 2000 hp. The engines were developed in the Fairey engine design bureau, and in parallel, the aircraft design bureau of the company was working on a project of an all-metal low-wing aircraft, which could become a universal aircraft for various tasks.

The versatility of the aircraft was caused by very specific reasons, the main of which is that the British Air Department, to put it mildly, had a poor idea of ​​what it needed. And throwing and shuffling was more than enough.

This is why the clever gentlemen at Fairey were working on a plane that could be shoved into the Ministry anyway. Any case presented itself in the form of an order P27 / 32 for a two-seater day bomber.

Fairey presented a monoplane to the court, which was then implemented into an aircraft called "Battle".

From the same project was born Fulmar, the prototype of the heavy fighter Firefly.

In general, "Battle" can be safely considered the ancestor of the "Barracuda", only the wing was low. The rest is very similar.

In general, there is a separate conversation about "Battle", as well as about "Fulmar". We are interested in exactly the derivative from the work on "Fulmar", that is, directly the "Barracuda" itself. And in addition to the fighter, they also tried to make a day bomber, a day fighter-interceptor, a dive bomber for the army, and a carrier-based dive bomber from Fulmar.

In general, having tried a bunch of motors (from Rolls-Royce there were Valcher, Vultura, Ex, from Napier there were Saber and Dagger, from Bristol there was Taurus), it turned out the plane, which was immediately sent for alteration. Firstly, it was necessary to reduce the wing for folding on the deck, and secondly, add a radio operator gunner. It also needed to improve the suspension for the torpedo. 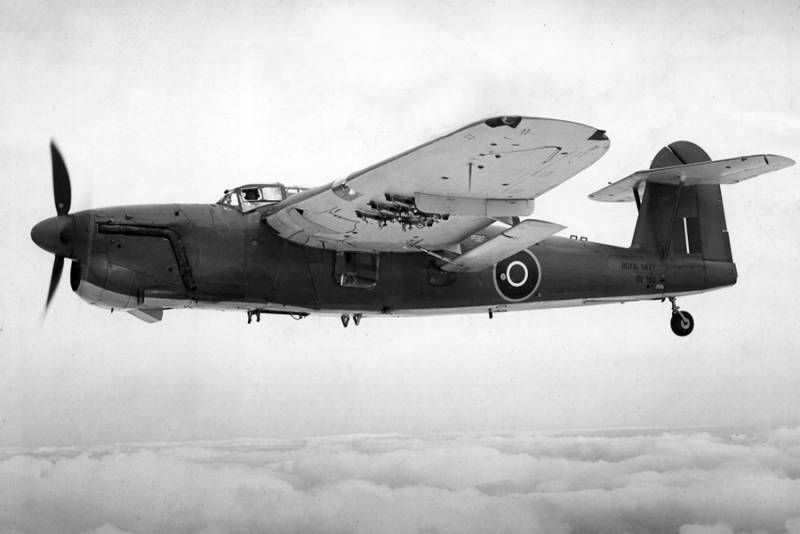 As an engine, they stopped at the "Merlin", which did not have a positive effect on the characteristics of the car. It is quite possible that this very moment made the future of "Barracuda" not entirely bright and promising. The engine definitely had to be more powerful.

The second oddity was the requirement to put the observer shooter facing forward in flight, ostensibly for a more realistic perception of the environment. This led to the rearrangement of the aircraft for a high wing, otherwise the observer simply did not see anything. The high wing gave rise to aerodynamic disturbances, which did not have a positive effect on handling. I also had to tinker with the chassis, the struts of which took on strange shapes and the mechanism turned out to be more than cumbersome.

The appearance of the Merlin 30 engine finally finished off, after the installation of which the center of gravity shifted and many components and mechanisms of the aircraft had to be rearranged so that the center of gravity was where it was needed. As a result, the pilot's view became even worse, especially to the sides and down.

In general, it is surprising how, after such perturbations, the aircraft generally retained acceptable flight characteristics.

In general, a promising carrier-based aircraft with good characteristics was simply ditched by joint ministerial efforts. One could forget about the outstanding flight data, especially the excellent maneuverability of the aircraft, which simply went away after the rearrangement.

But the main complaints were all the same to the Rolls-Royce engine. The result is a rare freak, with an inverted observer shooter, creepy L-shaped landing gear and angular shapes. 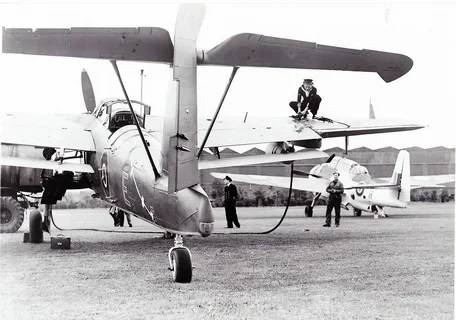 The first test flights revealed a very unpleasant thing: Youngman's new flaps did not work as expected and again required rework to stabilize the aircraft. In general, all these searches for the optimal design for the "Barracuda" took almost ten years.

And as a result, on May 18, 1942, the first serial "Barracuda" took off. The plane showed its ambiguity. The motor was clearly weak, hence the problems with takeoff, the speed of climb with a torpedo was generally depressing. But in flight, the plane behaved very well, control was easy and accurate, and Youngman's flaps well dampened dive speed, which was very useful for a torpedo bomber and a bomber. 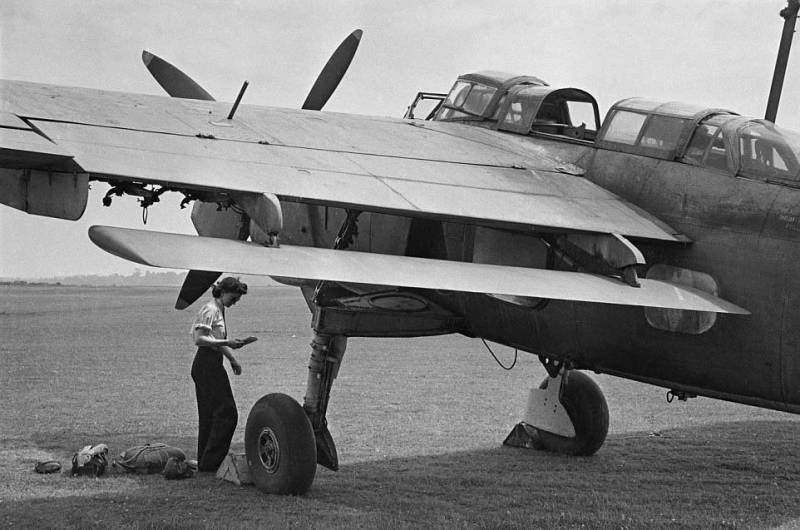 Landing, too, did not cause any difficulties, "Barracuda" perfectly landed both on airfields and on the decks of aircraft carriers.

The Barracuda's only weak point was its engine. Therefore, after the first three modifications, it was decided to abandon the "Merlin 30" in favor of something more powerful. For example, the Griffin from Rolls-Royce with a capacity of 2000 hp. But this car appeared only after the war.

And the produced vehicles served as training ones and served in the navy until 1953.

In general, "Barracuda" turned out to be so-so. Even after the final revisions, there were more than enough problems. The Merlin motors of the 30th series (1300 hp) and the 32nd series (1640 hp) did not provide outstanding flight characteristics. The strange landing gear struts brought with them the expected operational problems for the technicians.

The range of the aircraft was frankly small. It was a bad idea to increase it by means of outboard tanks, since the already low speed dropped and the combat load had to be reduced. In the case of bombs, this was still possible, but it was unrealistic to reduce the weight of the torpedo. 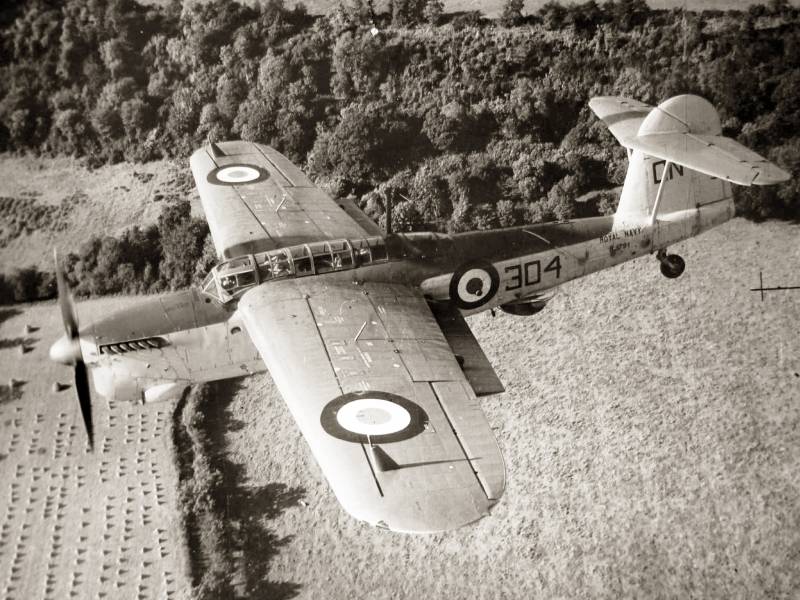 Nevertheless, 2 aircraft were built (572 with prototypes), which took the most direct part in the Second World War as a carrier-based aircraft. And, if the effectiveness of the "Barracuda" as a torpedo bomber was not very great, then as a dive bomber, thanks to Youngman's flaps, which also worked as air brakes. This made the Barracuda a highly maneuverable aircraft and an effective dive bomber.

In addition to working as a bomber and torpedo bomber, "Barracuda" was actively involved in mine laying. Mining of the enemy's fairways and waters turned out to be a very effective measure, because in 1941-1942 alone, 142 German ships and vessels were blown up and sank on mines delivered from aircraft.

Success in mine laying, where the Barracudas did not get from a good life, prompted the British command to strengthen the laying, which led to an increase in losses, since the Germans realized that the Barracuda flights over different sectors of the sea were directly related to the subsequent explosions of ships.

But by that time, the British command had sent all the obsolete Halifax and Blenheim bombers to mine laying. And the mine war continued until the very end of the war.

"Barracuda" fought in all theaters of war, European, Atlantic and Pacific.

In addition to bombing and torpedo strikes, the Barracudas were engaged in not very common activities, such as night illumination of the zone of movement of escorted convoys. Luminous parachute bombs dropped from aircraft (Flare bombs) created a zone of illuminated water surface, which helped the signalmen of the escort ships to detect the breaker of the submarine periscope or the breaker of the torpedo.

But on the whole, the aircraft did not show any noticeable victories, as, for example, its predecessor, Swordfish.

When used on British aircraft carriers in 1944, it turned out that in a tropical climate, the Merlins feel disgusting and the flight range is reduced by almost 30%. Many of the units already in service with the Barracuda were recalled to the metropolis for rearmament on Lend-Lease Avengers.

However, on December 1, 1947, the 815th regiment was reinstated as part of the Fleet Air Arm and was used to practice anti-submarine warfare tactics. The regiment was armed with Barracuda Mk.III until May 1953, which was a record for their longevity in Great Britain. 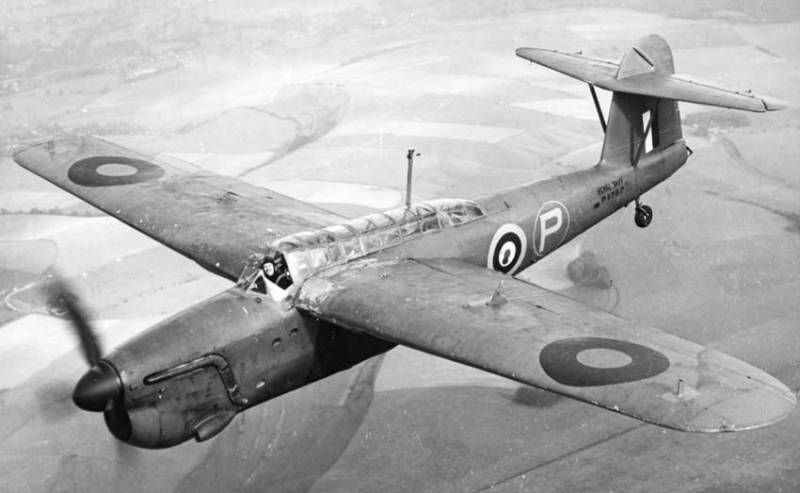 But on the whole, as already noted, the "Barracuda" did not achieve success. Mainly due to the fact that the aircraft's range was depressingly short.

In addition, only 5 British aircraft carriers fought in the waters of the Indian and Pacific Oceans. These were Illustrious, Victorious, Indefatigable, Indomitable and Formidable, which carried 628 aircraft. At the same time, the United States entered service only in 1944, 21 aircraft carriers in addition to those already available.

Probably the main combat mission of the Barracuda was the attacks of the Tirpitz in 1944. 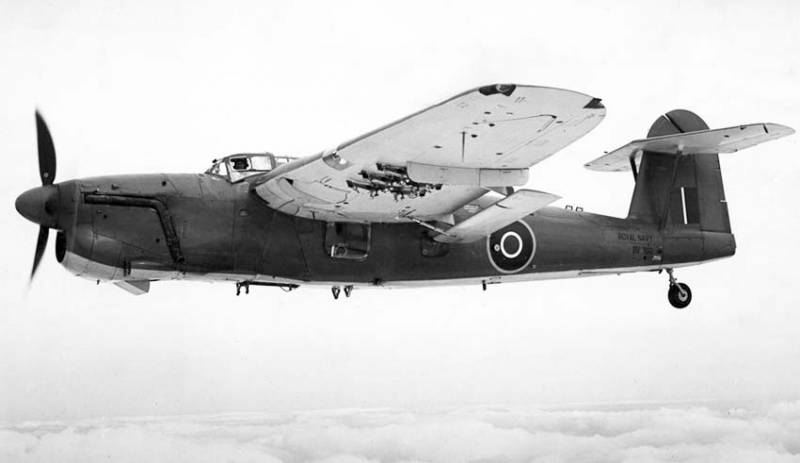 Until that moment, starting in 1942, perhaps all British aircraft that were capable of it were engaged in attacks on the Tirpitz. In the Aas Fjord, the German battleship bombed the Halifaxes, then there was a raid by the Sterling, then in the Westfjord, the Tirpitz was attacked by the Albacors from the Victoriez aircraft carrier. Then there were the Halifaxes and Lancasters again. And - not a single hit.

Such impressive setbacks forced the British command to leave Tirpitz alone. But in 1944, they decided to return to the plan to destroy the Tirpitz in White Hall.

On April 4, 1944, two waves of aircraft took off from the aircraft carriers. Each had 21 Barracudas and 40 Wildcats, Hellcats and Corsairs.

And the "Barracudas" were able to do what the heavy bombers could not: from the heights of 1500 and 3000 meters they hit the battleship with bombs! 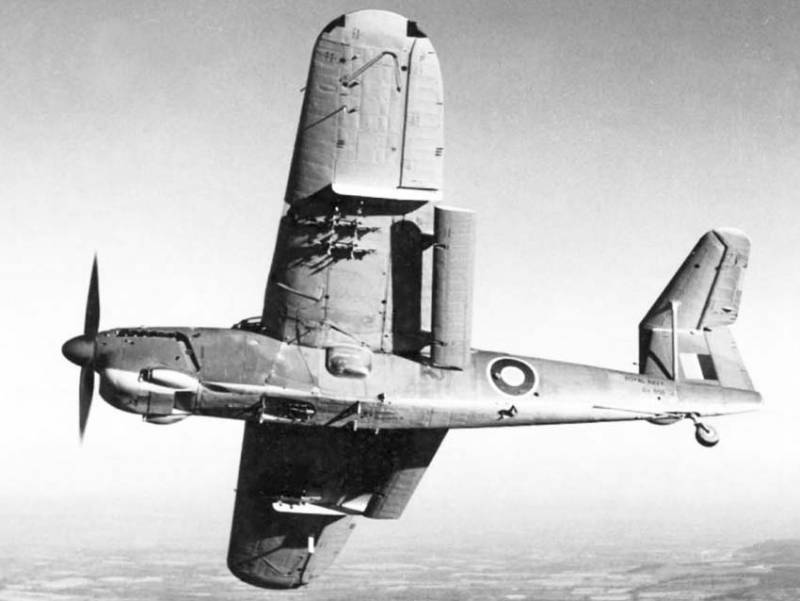 In total, about 40 tons of bombs were dropped on the parking lot in the Altenfjord. More than a hundred pieces. As a result, the Tirpitz received 4 hits from 1000 pounds (454 kg) bombs and 10 hits from 500 pounds (227 kg) bombs. This is more than a decent indicator. In the end, we could afford to say: Yes, we ate Tirpitz.

And if we consider that the losses amounted to 3 bombers and 1 fighter, then we can say with confidence that the operation was a success. The Tirpitz was put out of action for several months.

In general, the defense of the parking lot in terms of air defense was unsatisfactory.

In general, if you do not take into account the brilliant opening, it should be admitted that the defense of the parking lot coped with its task.

After the Tirpitz was dealt with with the help of the Tallboys, the Barracudas returned to their normal missions. And in 1946, the gradual rearmament of the regiments began with Fairey "Firefly" aircraft.

Speaking about the merits of the "Barracuda", it is worth saying the following: the plane went out so-so. At the behest of aviation officials, who did their best to make a frankly weak plane for supporting roles out of a promising aircraft.

Of course, the appearance of "Avenger" from the American firm "Grumman" completely erased the slightest prospects for the "Barracuda". The American torpedo bomber was unambiguously three heads taller than the British plane. But the naval dive bomber was in demand.

But initially low flight characteristics did not give this machine the slightest chance to enter history as a symbol of loud victories. Too slow speed, too weak armament, too little flight distance.

However, British pilots simply did not have a choice until the advent of Lend-Lease aircraft. Or Barracuda, or Albacore and Swordfish.