The Ukrainian armored personnel carrier is a possible competitor to our promising Kurganets-25 and Boomerang platforms.

August 23 2012
49
In 2002, the results of the completed tests of the BTR-3 in the United Arab Emirates and taking into account the requirements of potential customers in the KMDB, the development of the prospective BTR-4 armored personnel carrier began. It was carried out at the expense of the team’s internal funds and received the Ladia cipher of developmental works (ROC). The prototype machine was first demonstrated at the Aerosvit exhibition in Kiev in 2006. When designing, the designers were given the following tasks: strengthening armor protection compared to the BTR-3, ensuring the landing of the assault force through the stern, improving crew living conditions, retaining the ability to force water barriers, increasing mobility and average speeds, creating a single chassis for the whole family of armored vehicles.

According to the expressed wishes of the probable buyers of the armored personnel carrier, the KMDB employees chose the layout with the front management compartment, the MTO middle compartment and the deployment of the combined combat and airborne squad compartment so that the infantrymen could leave the car through the stern hatches.

The BTR-4 is designed for transporting personnel of motorized rifle units and their fire support in combat, conducting combat operations in various climatic conditions, as well as when used by the enemy weapons mass destruction. The armored personnel carrier can be used both during the day and at night, make marches on roads with different pavement and move around the area where there is a complete lack of roads. 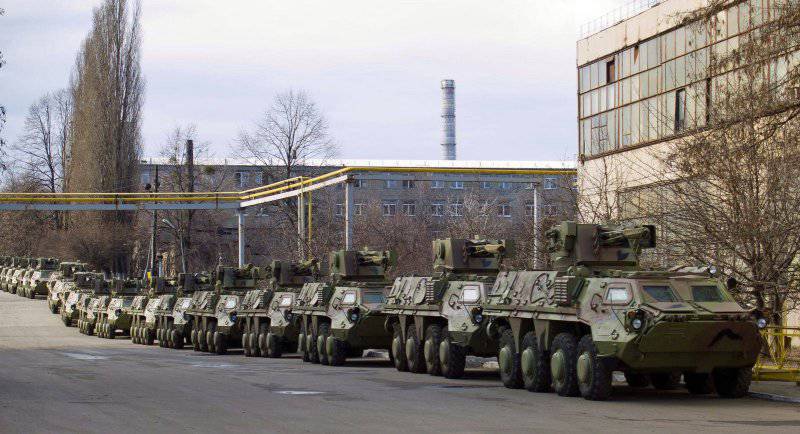 The range of operating ambient temperatures from -40 to + 55 degrees Celsius.

The amphibious capabilities of the BTR-4 allow it to overcome water bodies, including sea, with waves up to three points (which makes the car attractive to the marine corps). The dimensions of the armored personnel carrier guarantee its transportation on railways and military transport aircraft aviation appropriate carrying capacity, as well as moving along unaccompanied highways.

The machine has a wheel formula 8х8. The layout, as mentioned earlier, with the location of the control compartment (OS) in the bow, the engine-transmission (MTO) - in the middle, and the combined airborne - combat (DBO) - in the rear part of the machine.

Department of Management (OU). Here are the jobs of the driver and commander, as well as controls. For landing in the BTR and getting out of it, the commander and driver in the sides mounted doors with built-in bulletproof glass blocks, and on the roof of the armored personnel carrier above the workplaces - hatches. Bullet-proof glass blocks are inserted into the frontal windows, which can be closed with armored covers (the same protection is on the glass blocks in the doors). The driver's seat is adapted to install a periscope surveillance device and a night vision device for driving at night. In the front sheet opposite the commander’s place there is a loophole with an armored cover - for firing personal automatic weapons.

The engine and transmission compartment (MTO) houses an engine with an automatic hydromechanical transmission and transfer case, as well as other systems ensuring its operation. There is a manhole from the OS to the airborne combat compartment between the starboard side and the MTO partition, which allows the commander and driver to leave the armored personnel carrier through the stern doors in emergency situations. MTO can be equipped with horsepower 480 – 600 engines according to the customer’s choice - 3TD, Deutz or Iveco (as well as other power units of the appropriate class and power). If the buyer of the car prefers the two-stroke diesel 3TD, produced by the Malyshev Plant and developed by the KMDB, the armored personnel carrier will have a roof of the MTO with an injection cooling system and exhaust to the left side. When using imported four-stroke engines, the cooling system is a fan with a silencer on the starboard side. The car reaches ground speed to 110 kilometers per hour, afloat - 10.

In the airborne combat compartment (RBS) there are double stern doors, and on the roof there are landing hatches. In the sides of the remote control are located loopholes, closed with armored covers, for firing personal automatic weapons. Loophole is in the right landing door, and in each top hatch. Individual infantry seats are attached to the roof of the troop compartment and can be positioned along the sides opposite each other or in the center of the vehicle towards the sides. These seats are quick-detachable, which allows you to transform the landing compartment for various tasks and transportation of goods. 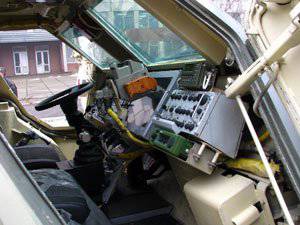 Armored personnel carriers are supplied with various tower modules developed by both KKBM (BAU-23, Thunder, Squall, Sturm, Parus), and other manufacturers, if they are products of the corresponding class. Characteristics of combat modules and their features - the topic of a separate article, which will be published later.

The regular crew consists of two or three people: the driver and the commander - the operator of the combat module (driver, commander, operator). Plus six to eight motorized infantry units, depending on the installed combat module.

The armored personnel carrier, as already mentioned above, is capable of swimming across water obstacles. It is afloat driven by two jet propellers installed in the aft of the hull along the sides. Before forcing the driver, without leaving the car, activates the water baffle plate and turns on the bilge pumps.

The steering is equipped with power steering. To increase maneuverability, four front wheels are made steering. The armored personnel carrier is equipped with a centralized tire pressure adjustment system, which allows the driver to quickly change the pressure to overcome difficult off-road sections. The MTO has automatic fire-fighting equipment and an air-conditioning system. Inside the OS and DBO are sheathed with Kevlar, preventing the wound of soldiers with chipped armor. This arrangement allows you to quickly transform the RBS without changing the layout decisions on the power plant and transmission to create a wide family of machines. The chassis loading capacity provides not only this, but also the placement of additional armor protection against hits from projectiles of automatic small-caliber guns.

It’s too early to give a rating, but

Currently, a number of vehicle models have been developed on the basis of the BTR-4, including the BTR-4K command vehicle, the repair and recovery vehicle (BREM), the BTR-4KSh command and control vehicle, the BSEM-4K armored sanitary and evacuation vehicle. It is possible to create a MOP-4K fire support vehicle, a BRM-4K combat reconnaissance vehicle, and other products.

In the 2009, the IDEX international defense technology exhibition demonstrated the second prototype of the BTR-4 with the Parus combat module, which was taken as the basis for mass production and delivery to Iraq of the BTR-4Е modification after the necessary modifications. Now, according to the contract signed in 2009, the BTR-4 batch, equipped with the Parus remote control unit, special vehicles - commander, command and staff, medical and repair-evacuation, maintenance, and training simulators, is being released and shipped. The developer of these products and the main contractor under this agreement is KMDB.

BTR-4 are manufactured at the facilities of the KMDB and the Malyshev Plant, a large number of Ukrainian enterprises are involved in the supply of components. The armored personnel carrier was adopted by the Ukrainian army 24 July 2012.

It is too early to assess the project, since there is still no operational experience in the use of armored personnel carriers in the army. But with a mass of 19 tons, this armored personnel carrier has amphibious qualities, reaching the buoyancy limit. To use it as a patrol car in an urban setting, it is possible to install additional armor and protective lattice screens, attachment points for which are nominally mounted on the hull, but the buoyancy will be lost. The chassis allows you to bring the weight of the BTR-4 to 27 tons and has the stock to upgrade. With appropriate funding, components and assemblies that were worked out on the BTR-4 can be used to develop a new generation of armored personnel carrier - the BTR-5.

The editorial staff of the "MIC" asked for the opinion of one of the Russian experts in the field of armored vehicles on the BTR-4. According to him, the available information suggests that the Ukrainian machine is able to compete with domestic promising platforms "Kurganets-25" and "Boomerang."