The British main battle tank Chiftain at one time became the base for a number of armored vehicles for various purposes. Perhaps the most interesting project of such a revision appeared at the final stage of its operation. Decommissioned from the army Tanks it was proposed to rebuild into radio-controlled targets called Crazy Horse.

The Chiftain entered service with Great Britain in the mid-sixties and then became the mainstay of the armored forces for two decades. In 1983, the delivery of serial tanks of the new type Challenger I began, which in the foreseeable future should have led to the decommissioning of the outdated Chieftain.

Some of the withdrawn from service tanks were planned to be sent for disposal. Some of the machines could be converted into equipment for other purposes. Other tanks were proposed to be sent to training grounds for use as targets and "tactical objects". In this way, it was planned to distribute approx. 1000 tanks remaining in stock.

In 1987, an interesting proposal appeared on the combination of two methods of using decommissioned equipment. It provided for the restructuring of the main battle tank into a self-propelled target for use at training ranges. Such a model could provide a more effective preparation of calculations for anti-tank missile systems. At the same time, the production of a new model would be quite cheap - through the use of a ready-made platform.

In the same 1987, the development of a set of measures began to turn a linear tank into a self-propelled target. The works were named Crazy Horse project - this name reflected the originality and even some madness of the original idea. The design was undertaken by the Royal Armament Research and Development Establishment (RARDE). These or those components were ordered from different commercial organizations. 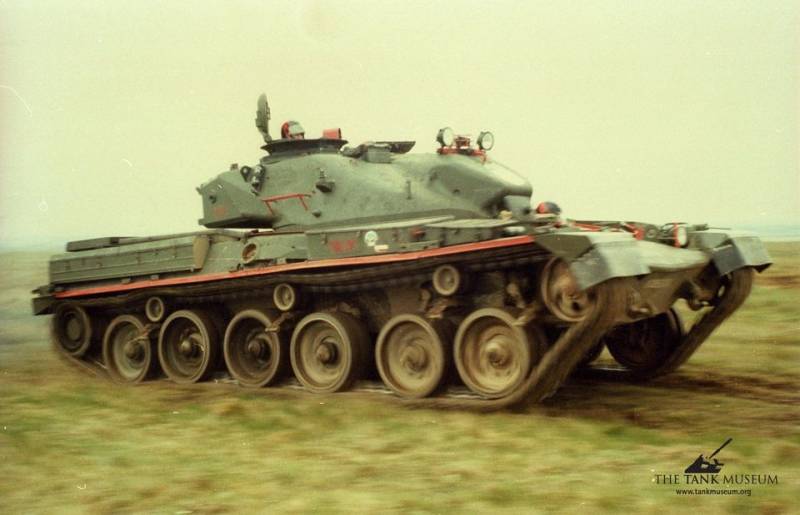 Crazy Horse tank at the training ground. Photo The Tank Museum / tankmuseum.org
For the construction of an experimental target, RARDE received a serial Chiftain tank of the Mk I modification with serial number 00EB33, built by Vickers in the sixties. Before being transferred for alteration, this machine was operated in one of the training units.

It was planned to include a remote operator-driver console in the new training complex. For its manufacture, RARDE received an Alvis Stormer armored vehicle.

The Crazy Horse project envisaged the use of the maximum number of units of the base tank while simultaneously removing and replacing individual components. By dismantling some units, it was proposed to reduce the weight of the vehicle, while increasing speed and maneuverability.

The armor parts of the hull and turret were not finalized, although most of the external equipment was removed from them. The power plant and chassis were not finalized. At the same time, all standard fuel tanks were removed from the tank and a small-volume container was installed in their place. It was assumed that this would reduce the likelihood of unwanted damage to tanks and fuel spills. 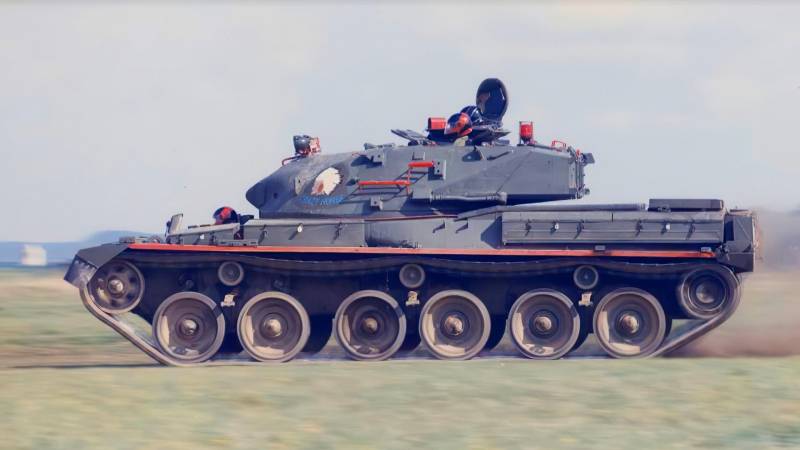 View to the other side. You can consider the emblem with the Indian. UK Department of Defense Photo
Curiously, a small internal tank could provide a cruising range of no more than a few miles. This was done in case of breakdowns in the remote control system. It was assumed that an armored vehicle that lost control would quickly run out of fuel, stop and not have time to go beyond the range.

Removed from the tower and fighting compartment weapon, fire controls and other devices. The frontal embrasure of the tower was closed with a solid plug. The tank no longer needed collective anti-nuclear protection. Some sources mention the removal of the radio station as unnecessary.

The habitable bays and their equipment have changed markedly. A remote control post was placed in the tower. The transmission of commands to the actuators was carried out by newly developed hydraulics. A camera above the driver's seat and a monitor in the tower were used to monitor the road.

"Crazy Horse" received remote controls. It was made on the basis of Skyleader devices originally used on aviation technique. The target tank was connected to the control vehicle via a two-way radio channel. The equipment received commands for the actuators from the console and sent back the video signal from the camera. 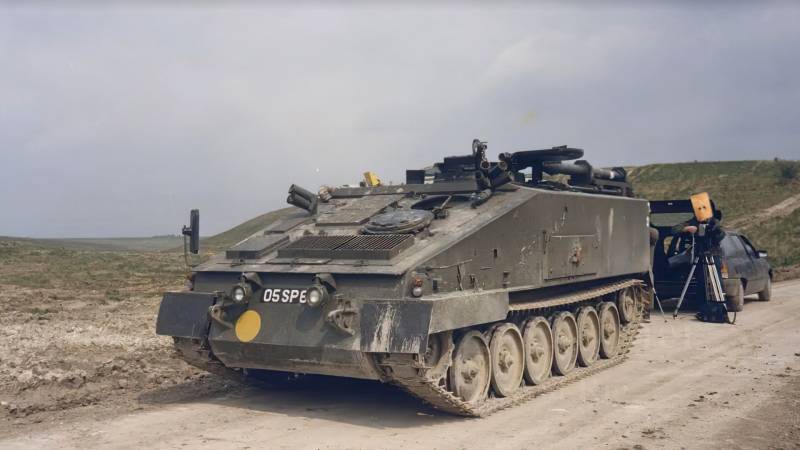 Control vehicle on the Alvis Stormer chassis. UK Department of Defense Photo
The experienced tank retained its original green color. At the same time, the edge of the fenders, handrails and some protruding parts were made red. Probably for the greater convenience of trained missilemen. On the left side of the tower there was a drawing - the head of an Indian in a traditional dress and the inscription "Crazy Horce".

The steering machine on the Stormer chassis has not undergone major modifications. An operator's workplace with a monitor and controls was installed inside the troop compartment. A folding mast with an antenna for radio communication was installed on the roof.

The operating principle of the new complex was quite simple. A self-propelled target with a driver and a control car were supposed to go to the range. After that, the driver left the tank and took his place at the console on board the Stormer BMP. From that moment on, control was carried out remotely.

Using the video signal from the target, the driver had to follow a given route. At the same time, ATGM calculations or grenade launchers could fire at the tank using inert ammunition. The armored vehicle, without additional protection, had to withstand the strikes of blank missiles and continue to move. Upon completion of the firing, the tank could return from the target field, take on board the driver and go to the box. 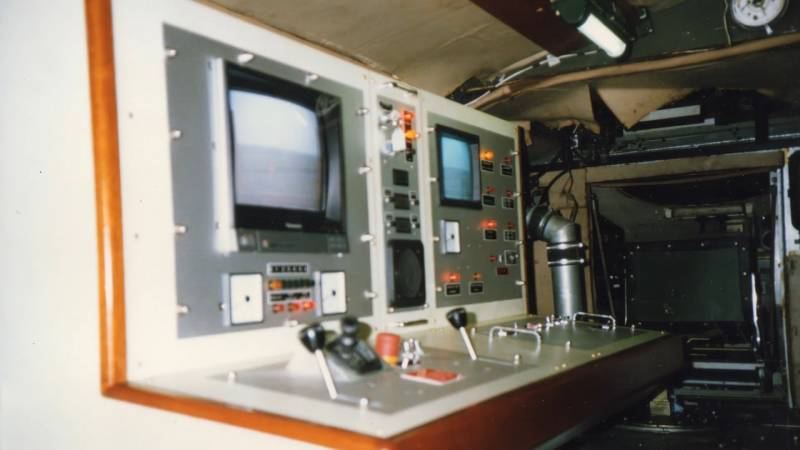 Operator's workplace in the control machine. UK Department of Defense Photo
Such a training complex had several characteristic advantages. The main thing is the most accurate imitation of a real armored vehicle on the battlefield. Unlike other moving targets, the Crazy Horse was a real tank with all its features. At the same time, the lighter design made it possible to increase mobility and more accurately simulate modern tanks of a potential enemy. Accordingly, grenade launchers and ATKR operators received more useful experience.

In 1987, RARDE built an experimental complex consisting of a target tank and control armored vehicle. Soon, tests began, pursuing several goals. It was necessary to check the driving performance and driving comfort from both driver's workplaces, as well as using the remote control. Then it was required to check the resistance of the tank to inert anti-tank missiles.

In the "manned" version, the Crazy Horse target retained all the basic qualities of the base tank. The remote control also performed well. The driver confidently controlled the armored vehicle at distances of up to 6 km, receiving a picture and transmitting commands. In general, "Crazy Horse" coped with the tasks.

However, there were some drawbacks. On the radio-controlled tank, the standard power plant and transmission of the Chieftain were used, which were not very reliable. There was a risk of breakage making operation difficult. There were also problems with the radio equipment, which turned out to be complicated and expensive. In addition, the video camera had a small viewing angle and insufficient picture quality, which made it difficult to control. 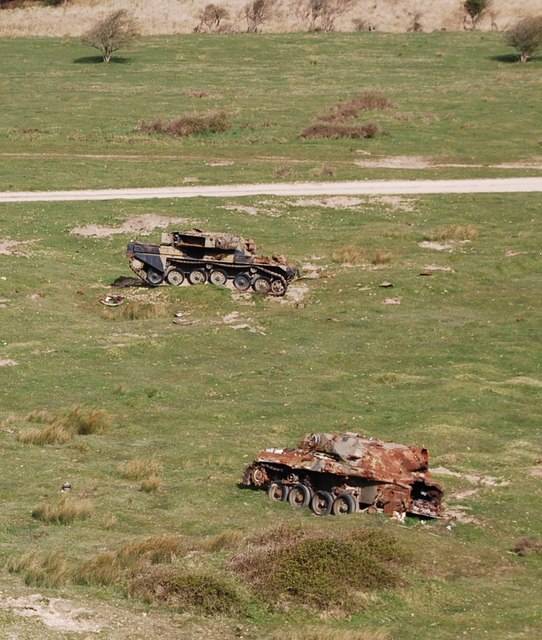 Chiftain tanks as stationary targets. Photo Wikimedia Commons
During the revision, the tank did not receive additional protection, which negatively affected its survivability. The standard anti-tank missiles of the British army, due to kinetic energy, could damage the external units of the tank or even break through the side armor.

As a result, already in 1987-88. it was decided to abandon the Crazy Horse project and continue using the existing target complexes. Lifting and movable shields, imitating armored vehicles, could not fully replace a real tank, but they were simpler, more convenient and more reliable.

However, the radio-controlled car was not written off. For some time, it has been used in various teachings and other similar activities. For example, in 1989, the complex was involved in the filming of the TV program Combat: A Battle Of The Regiment. With his help, the military participants of the show demonstrated their skills in fighting tanks.

At the turn of the eighties and nineties, the Crazy Horse complex was decommissioned. The control vehicle was apparently dismantled and returned to service in its original configuration. An experienced target tank was sent for storage. It is currently in the Bovington Armored Museum. Other Chieftain tanks were less fortunate. As previously planned, some were melted down, while others were sent to landfills - as fixed targets. The revolution in the training of missilemen was canceled.

Ctrl Enter
Noticed oshЫbku Highlight text and press. Ctrl + Enter
We are
British armored fistIs the "old" well forgotten to become the "new"? Part-2. At the call of honor and duty
Military Reviewin Yandex News
Military Reviewin Google News
19 comments
Information
Dear reader, to leave comments on the publication, you must sign in.