August 25 2012
3
The joint work of famous gunsmiths almost always ends only with a positive result, especially when both gunsmiths have quite good imagination and experience, and one of them specializes in the development of ammunition. Such a "duet" was formed in 1898 year, when Karel Krnka left the company "Gatling Company" due to its collapse and got a job at the George Roth cartridge factory. In fact, they immediately began working on several promising projects, one of which ended with the appearance of such a gun as the Roth-Sauer M1900. 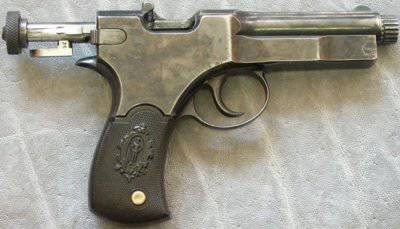 If we talk about appearance weapons, it should be noted that the gun is beautiful in its own way and not quite ordinary, however, this is a matter of taste. The gun turned out relatively compact and light. Its weight is 655 grams, and its length is equal to 170 millimeters. It should be noted separately that the weapon does not have any controls on its side surfaces, which makes the Roth-Sauer M1900 pistol sufficiently flat and comfortable to wear. It is also impossible to pass by the whole frame of the weapon, which indicates a rather difficult production of this pistol, which naturally affected the price. A notable feature of the Roth-Sauer M1900 pistol was that it laid the foundation for adaptation to various ammunition. This idea was Georg Roth, who planned to make a similar gun in order to be able to adapt it to the requirements of the customer by replacing several elements. It turned out to be implemented, but there is no need for this, as it turned out. As a result, the weapon is built on a rather interesting and not quite usual principle that would be more suitable for pistols using powerful cartridges than those that the Mouth developed for this weapon. 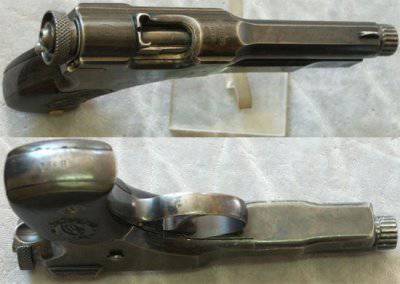 Automatic weapons built according to the scheme with a long stroke of the barrel, the channel is locked when you turn the shutter. So after the shot, the powder gases press not only on the bullet, trying to push it along the barrel, but also on the bottom of the liner, which leads to the beginning of the movement of the barrel and the bolt back. Reaching its extreme point, the bolt was fixed, and the barrel began to return to its original position, while removing the spent cartridge case from the chamber. Returning to his seat, the barrel released the bolt, which moved forward, inserting a new cartridge into the chamber, and back entering the clutch with the barrel. With all this, the ammunition was a caliber of 7,65x13 millimeters, which generally makes one wonder how their energy was enough to put the whole structure in motion. However, the gun worked and worked quite smoothly to launch it into mass production. Naturally, this weapon had its drawbacks, but we will not judge strictly, after all, it’s about the model of the late nineteenth - early twentieth century.

First of all, it is worth noting not quite convenient procedure for charging weapons. To charge the gun, you had to manually remove the bolt and barrel from the clutch by turning the first one and pulling it back. The cartridges were inserted one by one or with the help of a clip through the window for ejection of spent cartridges. In principle, at that time there were already versions of pistols with interchangeable magazines and why gunsmiths decided not to use this idea is incomprehensible. The second serious disadvantage was the sights of the weapon, consisting of unregulated front and rear sights, the latter being made in the form of a holder for the holder and not made of the hardest metal, which led to its constant deformations, and this had a deplorable effect on the accuracy of the weapon. In general, the weapon didn’t complain about accuracy; only the sights failed. The third really significant drawback of this gun was that when reloading the weapon, it was necessary to hold the bolt while pulling it back without turning the control element of the safety catch. Failure to comply with this rule led not only to wedging the gate, but also to wear of the safety mechanism, which reduced the safety of the weapon.

We should also talk about the trigger mechanism of the weapon, which was also not very common. The fact is that the full compression of the mainspring did not occur during the course of the shutter, it was only partially compressed, after which it was fixed. Its dovzvedenie occurred when you press the trigger.

A few words need to be said about the ammunition that was used in the weapon. The fact is that initially the gun was designed for Browning cartridges, but, apparently, Roth wanted not only to profit from sales of the gun, but also ammunition. As a result, the weapon was created under the patron Roth, which was less effective than the Browning cartridge, but also cheaper. But this did not help the pistol to become widespread, rather, on the contrary, the use of little-known ammunition was the main reason for the refusal of consumers to buy this weapon. In addition, we must not forget that at that time the design of the pistol was quite difficult to understand, and accordingly caused concerns about reliability, especially against the background of the unfolding struggle between revolvers and automatic pistols. However, despite its low popularity, the pistol was mass-produced, Sauer was engaged in its production, and the company Rota produced ammunition for weapons. Actually, this determined the name of the gun, eliminating in it the mention of Krnke.

In general, giving a description of this gun, it should be noted that it is certainly a unique weapon of its kind. Combining several interesting solutions at once, this sample shows that at the beginning of the twentieth century the gunsmiths were more widely thought and did not focus on the same weapon schemes. However, you can argue in a different way. After all, it was at that time that it was checked that it has the right to exist and what is not, and as a result, simpler and more reliable versions of weapons won.