Betrayal of 1941: the turmoil of the first days 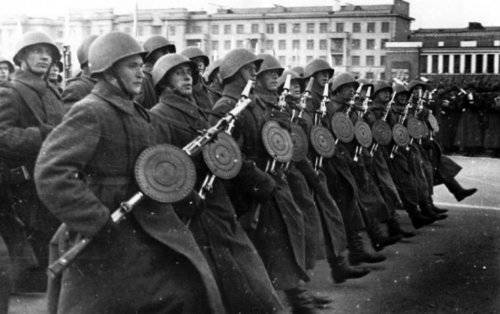 The first year of the Great Patriotic War is one of the most mysterious periods in the life of the Soviet Union.


It is incomprehensible and vague as well for descendants and for all those who then met this year 1941 in the ranks of the armed forces of the USSR.

Absurdly absurd time. When contrasts coexisted at the same time.

On the one hand, the feat of those who defended our borders in those days is well known. When the Brest Fortress fought to the last breath and to the last cartridge. When the pilots in the very first hours of the war went to air rams.

On the other hand, a paradoxically large number of soldiers surrendered.

So what was really going on there? What was the reason for such an obvious dissonance?

We tried to analyze the various points of view of specialists on this matter. And we will present to you their quintessence in the series "Betrayal of 1941".

Where is the truth?

What explanations for such a contradictory development of events were not given.

Some of the experts are spreading the version that Stalin, of course, is to blame. And that his purges of commanders may have just beheaded the army on the eve of the war.

And the liberals, so they went even further. They spread a rumor that, they say, human rights were so violated in the USSR that people allegedly almost dreamed of running out of this unbearable social hell themselves. And supposedly that is why they were downright delighted with the beginning of the war ...

Nonsense, but someone believes ...

There are those who praise the military qualities of the German army, and also argue that it was useless to resist their superiority.

There are many discussions on this topic.

Of course, not so many people in the USSR then allowed themselves to publicly say at least something on this score, more or less approaching the truth.

At that time, not every sergeant, lieutenant or lieutenant colonel could see the actual state of affairs from a bird's eye view. Not all generals, by the way, too.

Only at the highest level of the military headquarters could the true situation be known. And then, perhaps, if only from the capital. Or from the height of commanding the fronts.

Although it is known from the real state of affairs that even the front-line headquarters did not fully control the situation. In this connection, therefore, not one hundred percent objective data were sent to the capital, to put it mildly.

So what happens? It turns out that the truth did not reach the very top leadership? And Stalin, Zhukov and Konev did not know the whole real truth?

That is, they did not have the completeness of the picture?

Nevertheless, as practice shows, historical the truth, after all, always exists and seeps into the people. Sometimes talented scientists just try to calculate it in their minds. To do this, they try to pose specific questions.

You will say that it is as easy as shelling pears. In fact, this is not the case.

To formulate the right question is an art that only a few can master. Many of us not only do not know how to do this, but also do not try to learn.

But the truth is revealed just when on

"A question clearly posed to nature ... a completely unambiguous answer is expected: yes or no",
according to the apt remark of S.I. Vavilov.

Is it possible to investigate what happened in 1941 from this point of view? Let's try, why not?

Was the Red Army really that much weaker than the German armed forces?

If we follow the general logic about the events of that time, then this answer should be

"Yes".
At that time, the Germans already had more than one won campaigns behind them on the territory of the European continent.

In addition, experts also note as a positive feature of the Germans - a well-tuned system of information exchange in the branches of the armed forces.

For example, in detail the very principles of interaction aviation with the ground forces were honed for about two and a half years by the formation of the military aviation of Nazi Germany by the Condor legion in the process of supporting local nationalists in the Spanish civil war there.

Interestingly, one of the participants in that civil war in Spain in 1936-1939 on the side of the Francoists, who received the rank of colonel in Spain, and then major general (1938), and then in November 1938 was appointed the last commander of the Condor legion ”, Was Wolfram von Richthofen. His contribution to the theory of interaction between the German combat arms is somewhat underestimated. But at the beginning of the war, he commanded German aviation in the area of ​​the Soviet South-Western Front.

"He overestimated the role of tactical aviation operations, believing that its main purpose was to support the offensive of ground forces."
Link

By the way, he was the nephew of that very famous German military pilot of the First World War, known as the "Red Baron", Manfred von Richthofen. 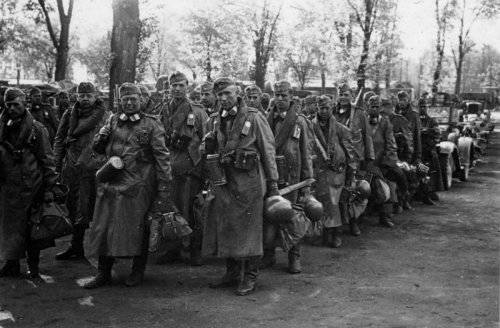 This is in theory.

But practice has shown a completely different result.

It turned out that the Germans did not succeed in completely destroying, that is, defeating, precisely those of our armies, to which they threw just significantly (if not extremely) superior forces and means.

How, tell me, this could happen?

Those, on whom the enemy directed all the force of his powerful blow, survived?

Moreover, just these domestic military units, as it turned out later, fought for a very long time and became a bone in the throat of the German blitzkrieg. Yes, it was they who created endless problems for the fast and unhindered advance of the Nazis deep into our country.

Isn't that an eloquent “no” to the question posed above?

Let's move on to some illustrative examples. First, the diagram.

On the line Baltic Sea - Carpathians, the offensive of the fascists was reflected by 3 of our fronts: North-West, West and South-West (from north to south). If we count from the Baltic, then the armies were located in the following order:

On the first day of the war, June 22, 1941, the shock offensive of the fascists tank wedges were directed at the armies of the 8th and 11th, as well as the 4th and 5th.

Let's try to track what happened to these armies in the future during the Great Patriotic War?

It was the 8th Army that met this period in the most difficult situation. After all, she needed to retreat to the territory of the unfriendly and spiteful Baltic.

So, the units of this army in a month retreat to Estonia. The Germans are pressing. Ours are defending themselves. And they retreat. They fight and retreat again. Fascists of the 8th Army are attacking and crushing. But do they not destroy it completely in the very initial period of the war?

Try to find in the memories of the Germans stories about the mass surrender of units of the 8th Army - there was no such thing.

And where in German books are stories about the mass surrender of the Red Army in the Baltic states? I do not have it either. And you can't even find episodes.

Moreover, the soldiers of the 8th Army and the Red Navy fought so desperately for the city of Liepaja that some researchers indicate that this city could even apply for the title of "hero city". 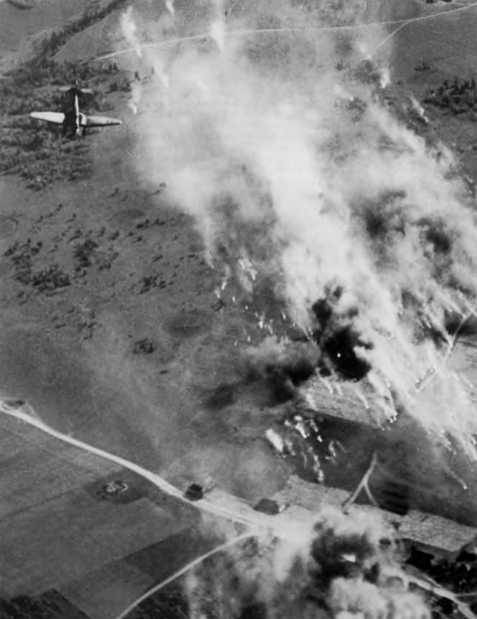 Moving on to the 11th Army.

Let's remember what happened on the first day of the war.

The 11th mechanized corps, which some recognized as the weakest (in composition) in almost the entire Red Army, rushed at the enemy with its light T-26s. Yes, yes, ours are attacking there. Moreover, the Soviet troops are pushing the Germans out of the border. Moreover, no orders for counterattacks had even been received at that time.

From the memoirs of Major Commander of the 57th Tank Regiment of the 29th Panzer Division Joseph Cheryapkin:

"June, 22. The Nazis walked with their sleeves rolled up and their uniforms collars unbuttoned, firing aimlessly from machine guns. I must say, it made an impression. I even had a thought, as if our battle formations would not falter.

I ordered to let the Germans come closer and open fire for sure. They did not expect any serious resistance from us, and when they were hit by a hurricane of fire from tank cannons and machine guns, they were stunned. The enemy infantry immediately lost their attacking fervor and lay down.

The ensuing tank duel ended not in favor of the Nazis.

When more than half of the German tanks and armored personnel carriers caught fire, the enemy began to withdraw.

The regiment also suffered losses. Having gasoline engines and weak armor, the T-26 and BT tanks flashed from the first hit of the shell. Only the KV and T-34 remained invulnerable.

In the second half of the day, we, by order, retreated to Grodno.

On June 23 and 24, the regiment as part of the division fought with the advancing enemy southwest and south of Grodno.

By the end of the third day of the war, less than half of the tanks remained in the ranks. "
Link

Yes, in the battles of the next few days (after June 22), the 11th mechanized corps will lose all of its tanks. But who surrendered there without a fight? There were none. On the contrary, the same counterattacks by light tanks of this 11th Army of the North-West Front will go down in the history of the war as the battle of Grodno.

The enemy did not expect this. Here is what the chief of the German General Staff F. Halder writes in his war diary (entry dated June 29, 1941) as the impressions of the German inspector general of the infantry Ott about the battles in the Grodno region:

“The stubborn resistance of the Russians makes us fight according to all the rules of our military manuals.

In Poland and in the West, we could afford certain liberties and deviations from statutory principles; now it is unacceptable. "
Link

Yes, this 11th Army is also retreating under the onslaught of superior enemy forces. But every time she fights for our land, for every city, for every inch of it. And although it was impossible to hold the position for a long time. But they fought. They existed as an army.

At first, communication with higher headquarters was lost. And there was even a moment when Moscow did not know anything about its existence. But the army did not surrender to the enemy. She was and continued to fight.

Gradually, the headquarters of this army got oriented and even saw the enemy's most vulnerable spot - the flanks. It is into these weakly covered flanks that our units are biting. And they hold back the wedge of German tanks aiming at Pskov, stopping the enemy's push for several days.

And then this army did not disappear anywhere. It also acts as a military formation in the Red Army's offensive in the winter of 1941-1942. 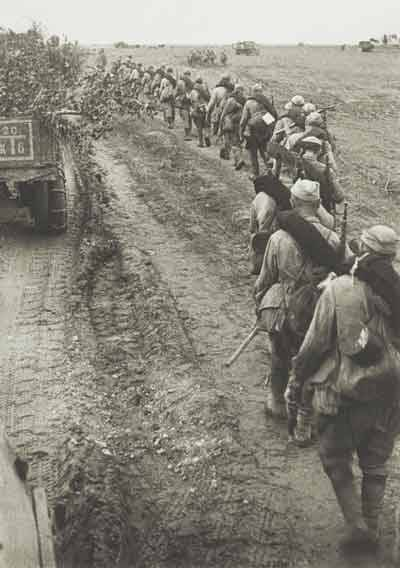 Having considered the actions of these two armies in the early days of the war, a preliminary conclusion can be drawn.

The 8th and 11th armies of the Northwestern Front were in the thick of it. Both of them were subjected to a powerful first blow by the German forces of the aggressor. But they were not suppressed or destroyed by this. Were not broken. The servicemen continued to fight and resisted.

The facts of mass surrender of soldiers and officers in these two armies are not recorded.

But what about the surrender in other armies in the first days of the war? About this in the following materials.