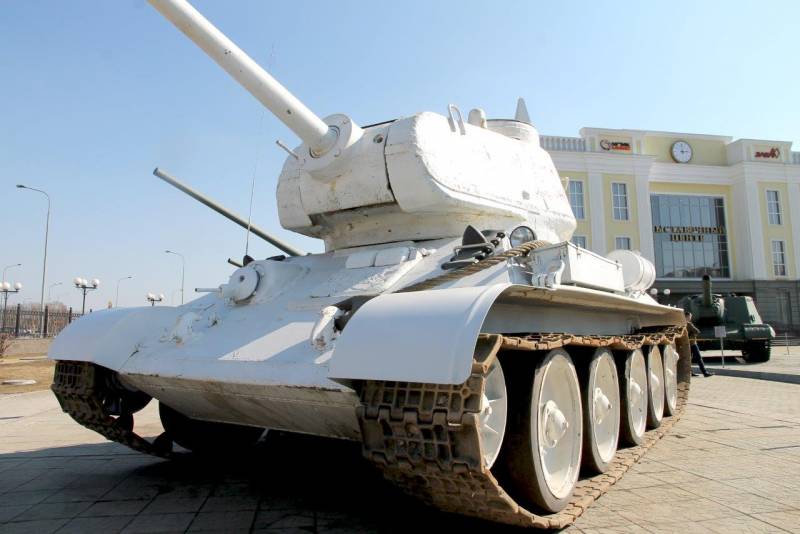 Techniques from military museums are unique carriers not only historical memory, but also excellent objects for a thorough study of wartime technologies.

You just need to find enthusiasts and professionals in their field. It seems that something similar happened in the Museum of military equipment of the Ural Mining and Metallurgical Company in Verkhnyaya Pyshma (a private cultural institution "Museum Complex"). To study the armor presented in the exposition of armored vehicles, two serious research institutes were involved - Physics of Metals and History and Archeology, as well as the Ural Federal University named after the first President of Russia B.N. Yeltsin.

Research institutes are located in Yekaterinburg and belong to the structure of the Ural Branch of the Academy of Sciences. Judging by the articles published so far, a whole team of doctors and candidates of sciences - B.A. Gizhevsky, M.V. Degtyarev, T.I. Chashchukhina, L.M. Voronova, E.I. Patrakov, N.N. Melnikov, you. V. Zapariy, S.V. Ruzaev and Vl. V. Zapariy. 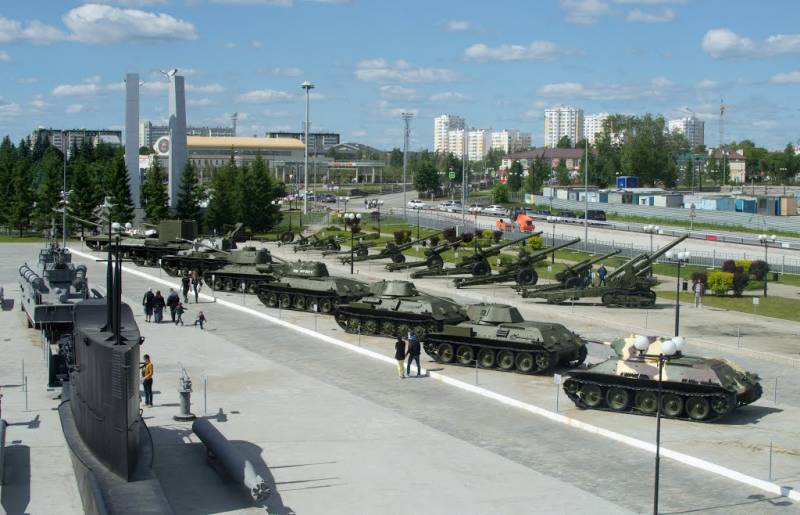 Museum in Verkhnyaya Pyshma. Source: sputnik8.com
The relevance of the work is not in any doubt - at the moment there are not so many materials about the composition in the public domain tank armor and production technologies during the Second World War.

Most of them belong to the period 70-75 years ago and are either based on an openly imperfect analytical technique, or even on theoretical calculations that have no real basis. In fact, the only source that sheds light on the intricacies and difficulties of the production of domestic tank armor during the war years was the NRC Kurchatov Institute - TsNII KM "Prometheus". That is why the Urals research is so valuable.

First of all, from the exposition of the museum in Verkhnyaya Pyshma, it is necessary to highlight authentic specimens actually produced during the Great Patriotic War. Some of the Soviet armored vehicles are either modern replicas or are collected bit by bit from the available spare parts.

Of the greatest interest, of course, for scientists were the variants of the T-34 tank, which endured the main hardships of the war. In the exposition and storage rooms of the largest private museum, thirteen tanks are collected at once - eight T-34-76, one T-34-57 and four T-34-85.

The tank turret was used to determine the manufacturer. Only by the shape of the tower can one reliably indicate the enterprise from which the car left the gate. With a certain degree of convention, you can even determine the year of issue. In the case of self-propelled guns based on the T-34, everything is much simpler - armored vehicles were produced exclusively by the Sverdlovsk Uralmashplant. 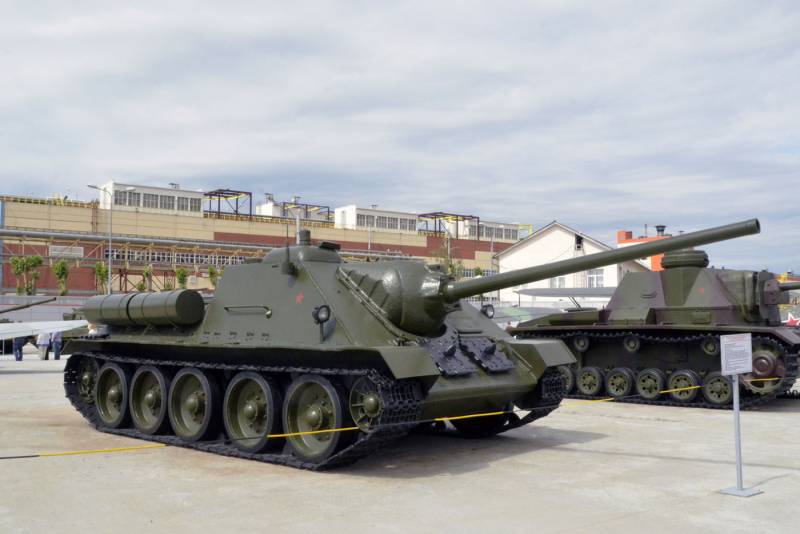 The researchers set themselves the main goal - to find out to what extent it was possible during the war years to withstand the requirements for the composition and manufacturing technology of 8C armored steel. Of course, it is impossible to draw far-reaching conclusions on just five museum exhibits, but now it is no longer possible to find a suitable sample for large-scale research. It remains to be content with carefully preserved exhibits of the museum in Verkhnyaya Pyshma.

Let's go directly to the objects of research and start with self-propelled guns.

The staff of the Institute of Physics of Metals set the main goal to investigate the type of armor fracture and to determine the quality of workmanship. This required the selection of samples, the use of sophisticated techniques, and the observance of many scientific rituals. Previously, the armor plates from which the samples were taken were subjected to chemical analysis by a non-destructive method using a portable optical emission spectrometer PMI Master Smart. To perform the measurement, a 30x30 mm surface area was cleaned from paint.

Measurements were made directly on the copies of the self-propelled guns presented in the museum's exposition. The study of the chemical composition of the armor of the SU-100 gun mask was not carried out due to the difficulties in using the PMI Master Smart device on rounded surfaces. For the frontal protection of the SU-100, armored steel 75 mm thick was used, the composition of which was different from steel 8C.

The chemical composition of the armor plates, according to optical emission analysis. Source: Article "Fractographic study of armored steel of self-propelled artillery installations of the Red Army"
The main problem for the researchers was to carefully take samples of armor in different places of self-propelled guns and not spoil the appearance of the authentic equipment.

As a result, it was decided to "pinch off" small samples (1x1x3 cm each) from the inner surfaces of armored vehicles. Further, to obtain a fracture, the samples had to be destroyed. Briefly about the technique firsthand:

“Specimens with notches made by the electrospark method were destroyed by shock loading with a hammer and chisel.

The application of this method required making cuts on opposite sides of the sample.

The temperature of the samples under loading was not measured.

Cooling in liquid nitrogen makes it possible to embrittle steel with a body-centered cubic lattice and to minimize the plastic component of deformation at the fracture surface.

As a result, it becomes possible to reveal on the surface of the destruction of micropores, microcracks that have arisen in the steel in the process of making armor.

Tests at room temperature are close to real conditions of destruction (on the battlefield).

The fracture surface was investigated by scanning electron microscopy on an Inspect F device (FEI) with an EDX spectrometer. "

The attentive reader will notice that in one of the cases of the SU-85, the armor for research was removed from the edge of the projectile hole in the frontal part. However, the data presented in the table of chemical composition by a kink show a slightly different composition of self-propelled armor.

Chemical composition in fractures of the studied steels. Source: Article "Fractographic study of armored steel of self-propelled artillery installations of the Red Army"
In particular, molybdenum, nickel, phosphorus and sulfur are absent.

And morphological analysis with a scanning microscope showed that the sample did not belong to the SU-85 frontal armor at all. As a result, an assumption was made about the origin of the projectile of the selected sample.

At the time of sampling, the researchers very unsuccessfully captured a piece of melted German shell steel. Why they did not take the sample again, history is silent. It can be assumed that the surface of the projectile "injury" is completely covered by enemy projectile surfacing and this makes the selection senseless.

What conclusions did the Ural researchers come to?

Despite the fact that technologists and steelmakers managed to preserve the brand composition of the legendary 8C in general terms, there were violations of the production methodology.

On the surface of the armor plates, a significant decrease in the proportion of carbon was observed, presumably due to improper heat treatment of the steel. The content of phosphorus and sulfur in the fractures of the studied steels significantly exceeds the indicators of the grade composition, which inevitably should increase the fragility of the armor.

In addition, the steel contains a noticeable amount of oxide slag inclusions. However, it is worth repeating, this did not lead to a critical decrease in the quality of the armor - the steel is quite ductile and intergranular destruction was not observed in any sample. And this, without exaggeration, is a real feat of the Soviet home front workers.

Now it seems impossible to withstand the composition of the 8C armor, which is very difficult to manufacture, in the face of evacuation and the titanic efforts of resuming armor production in Siberia and the Urals.

Ctrl Enter
Noticed oshЫbku Highlight text and press. Ctrl + Enter
We are
Is the "old" well forgotten to become the "new"? Part-2. At the call of honor and dutyThe fire control devices of the Soviet and German tanks of the Second World War. Myths and Reality
Military Reviewin Yandex News
Military Reviewin Google News
67 comments
Information
Dear reader, to leave comments on the publication, you must sign in.