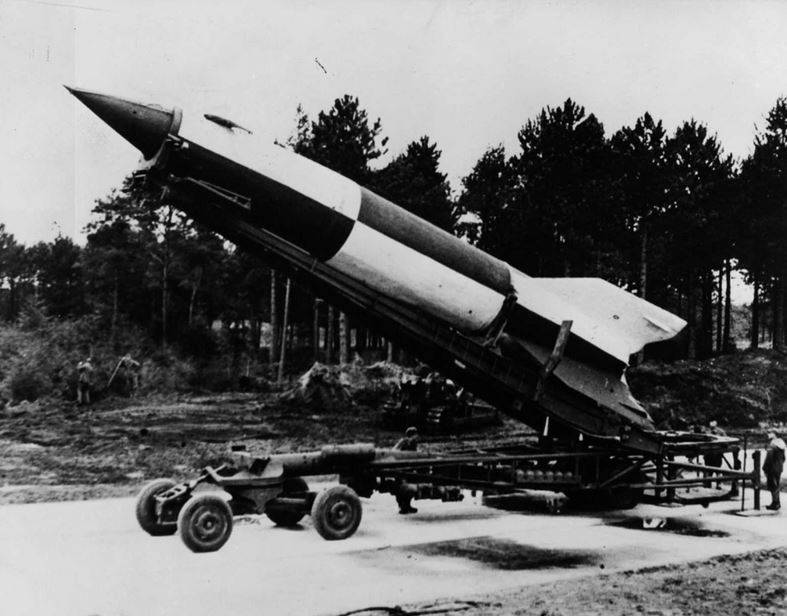 After the end of the war in 1945, American and Soviet intelligence services began hunting for the secret technology of the Third Reich in the field of missile production and for specialists with this knowledge. The Americans are more fortunate. They were the first to occupy Thuringia and the Peenemünde rocket range, removed all the equipment and the surviving missiles, taking with them all the specialists who were there.

When this territory was handed over to the Soviet troops, there was practically nothing left there.

The collection of information on missile technology and the search for scientists and designers involved in the development of missiles was led by Zhukov's deputy, General Serov. At his suggestion, a group of Soviet designers in rocketry, disguised as Soviet officers, was sent to Germany in 1945, consisting of Korolev, Glushko, Pilyugin, Ryazansky, Kuznetsov and a number of others. The group was headed by the future Marshal of Artillery Yakovlev and the People's Commissar of Armaments Ustinov.

Restoring the production of V-2 missiles in Germany

Despite Serov's best efforts, the entire rocket could not be found. But soon the Dora underground plant found components for several sets of missiles.

We also managed to attract German specialists. The case helped.

All leading experts, including Brown and his deputy Helmut Grettrup, were moved by the Americans to their zone of occupation. Grettrup's wife came to the Soviet command and made it clear that everything is decided not by her husband, but by her. And, if the conditions suit her, then she is ready to go to the Soviet zone with her husband and children. A few days later, the whole family with two children was transported to the Soviet zone. An attempt to get Wernher von Braun out failed. The Americans guarded him too well.

Grettrup helped to find specialists. And Serov decided to restore production and assembly of the FAU-2 with the involvement of Korolev and Glushko. Institutes, laboratories and pilot plants were organized in different places.

Grettrup, close to Brown, was better informed than other specialists about the V-2 work. And at the Rabe Institute a specialized “Bureau of Grettrup” was created, which compiled a detailed report on the work on the V-2.

In February 1946, all units involved in the V-2 work were merged into the Nordhausen Institute, whose director was General Gaidukov. He had earlier achieved the release of Korolev and Glushko from the camp, the first of whom became the chief engineer of the institute, and the second - the head of the engine department.

The institute included three V-2 assembly plants: the Rabe Institute, plants for the production of engines and control equipment, and bench bases. Grettrup was one of the leaders in the restoration of V-2 production.

By April 1946, the pilot plant for the assembly of missiles was restored, the testing laboratory was restored, five technological and design bureaus were created, which made it possible to assemble seven V-2 missiles from German parts. Of these, four were prepared for bench tests, and three missiles were sent to Moscow for further study. In total, up to 1200 German specialists were involved in this work.

In the presence of Serov and the heads of divisions, bench tests of rocket engines were successfully carried out. Then 17 missiles were sent to Moscow.

Subsequently, at the Kapustin Yar test site in October 1947, with the participation of German specialists, V-2 missiles were launched, which were taken to the Soviet Union by Serov's group.

The first three launches were unsuccessful.

The missiles were seriously off course. One of the rockets rose to an altitude of 86 km and flew 274 km. At a meeting with the Germans, one of the control system specialists suggested that the missile's deviation from the course was due to the high voltage applied to the gyroscopes. And he suggested installing a voltage regulator.

These recommendations have been implemented. And subsequent launches ensured high accuracy up to 700 m. Created on the basis of the V-2 with the participation of German specialists, the first Soviet R-1 missile systems were put into service in November 1950.

Soviet designers under the leadership of Korolev significantly improved the German design by installing a number of new units. And they laid the foundation for the Soviet rocket and space program.

Deportation of German specialists to the Soviet Union

Considering that, according to the decision taken together with the allies, the territory of Germany was subject to complete demilitarization with a ban on the development and production of any types of weapons, Serov at the end of the summer of 1946 proposed to Stalin to take the largest German specialists in atomic, rocket, optical and electronic technology to the Soviet Union.

This proposal was supported by Stalin. And the preparations for the operation began in secret.

In early October, all the main leaders of the Nordhausen Institute were gathered for a closed meeting with Gaidukov. Here they first saw Colonel-General Serov. In addition, he was also Beria's deputy for counterintelligence and had unlimited powers.

Serov asked everyone to think and draw up lists with brief characteristics of German specialists who could be useful while working in the Union.

Selected German specialists were taken to the Union regardless of their wishes. The exact date of the deportation was unknown.

The operation was carried out by specially trained operatives, each of whom was assigned a military translator and soldiers to help load things.

German specialists were told that they were being taken out to continue the same work in the Soviet Union, since it was unsafe for them to work in Germany.

The Germans were allowed to take any things with them, even furniture. Family members could go or stay at will. Under such free conditions, one of the scientists, as it turned out later, under the guise of his wife, wrote down his mistress, and no claims were made to him. The Germans were indeed provided with the most favorable conditions for their fruitful work in the USSR.

In order to avoid leakage of information, the deportees were not informed of anything in advance. They should have found out about it on the last day. To soften the deportation, Serov suggested organizing a banquet for the Germans and treating them well with alcohol in order to avoid any excesses. Such an action was simultaneously carried out in several cities at once. There were no excesses.

The evacuation of German specialists with their families to the Soviet Union was carried out in one day on October 22, 1946.

On the day of the dispatch, Grettrup's wife showed herself again, declaring that she was not going to starve her children, she had two beautiful cows here, and she would not go anywhere without them. The high-ranking husband did not dare to contradict his wife. Serov gave the command to attach a freight car with two cows to the train, supplying them with hay for the road. But the question arose who would milk them, the road was long. Frau Grettrup said that she would milk the cows herself.

Under Serov's leadership, 150 German specialists with their families (about 500 people in total) were sent to the Soviet Union. Among them there are 13 professors, 32 doctors of technical sciences, 85 graduated engineers and 21 practical engineers.

They were sent to sanatoriums on the Gorodomlya Island on Lake Seliger near the town of Ostashkov. And placed on the territory of the former Sanitary-Technical Institute, redesigned for the development of rocket technology. It was an ideal place where foreign intelligence could not penetrate.

Accommodation conditions for German specialists were very good for the post-war years. They lived like in a resort. And they were given the opportunity to work quietly in their specialty.

To manage missile development in the USSR, NII-88 was created in Kaliningrad (Korolev) near Moscow, headed by Lev Honor, a major organizer of military production.

In the structure of this institute on Gorodomlya Island there was a Branch No. 1, the chief designer and soul of which was Grettrup.

It should be noted that after Germany, Korolev, for some unknown reason, was "pushed" to third roles and headed only one of the departments in NII-88. At the same time, other comrades-in-arms on the "German business trip" became the heads of the leading institutes and factories. But soon (thanks to his remarkable organizational skills) he found himself at the head of an entire industry.

A group of German specialists on Gorodomlya Island made a significant contribution to the formation of the Soviet rocket and space program.

How they lived, spent their time and what they developed are the subject of a separate conversation in the next article.

Ctrl Enter
Noticed oshЫbku Highlight text and press. Ctrl + Enter
We are
Shturmbanführer American HeightsPeenemünde: the starting point of the space age with an ambiguous past
Military Reviewin Yandex News
Military Reviewin Google News
69 comments
Information
Dear reader, to leave comments on the publication, you must sign in.