Uncle Sam's cars: the history of US tank building

March 2 2021
10
On April 6, 1917, the United States entered World War I. A week later, American General John Joseph Pershing arrived in Europe. He perfectly understood the importance of combining firepower with mobility and, in fact, initiated the creation of the US armored forces.


However, proposals to organize the production of combat vehicles have been received by the American military before. In 1915, a businessman with the last name Lowe presented a draft of a 30-ton tank based on the Willock tractor. Two years later, the Holt tractor company presented a car very reminiscent of the British "Little Willie". The Minnesota-based Pioneer Tractor Company also had a proposal. The car received the nickname "Skeleton" because of the design of the chassis. Nevertheless, the brainchild of factory engineers did not arouse any enthusiasm among the military.

After Pershing proved the need to create tank units, the US command had no other options but to purchase combat vehicles from other countries. The light tank fleet was formed from the French Renault FT-17. At that time, these were some of the best cars in the world with a layout that later became classic.

Heavy tank units were planned to be armed with Mark VIII Liberty vehicles. This Anglo-American development was a typical diamond-shaped tank with wide tracks. The 10-meter vehicle weighed 39 tons and was armed with two 57 mm Hotchkiss guns. The crew of the car consisted of 8 to 11 people. There were about 100 of these tanks in the US Army, but the numerous advantages of the Renault FT-17 meant that the Mark VIII Liberty never took part in the fighting.

After the end of the First World War, there were no large tank formations in the United States for 20 years. Despite this, funds were allocated for the improvement of technology. In 1924, a project appeared for a small 7-ton tank with a non-standard layout called the T1. The turret of the car was located aft, and the engine was in front. As armament, 37 mm cannons and 7,62 mm machine guns were offered. In total, there were about 5 modifications of the car, however, due to design flaws, all of them were rejected.

After the closure of the light tank program, the Americans spent another 7 years in design. Among others, the T2 LT was tested on a Vickers suspension. It was planned to be armed with machine guns or small-caliber automatic cannons. And although the vehicle did not go into production, the designers used the accumulated experience to create a small series of the M2 LT light machine gun tank with a new suspension. After him, the Americans released the M2A4. The modification was mobile, maneuverable and received cannon armament. The production of this tank continued until 1941. 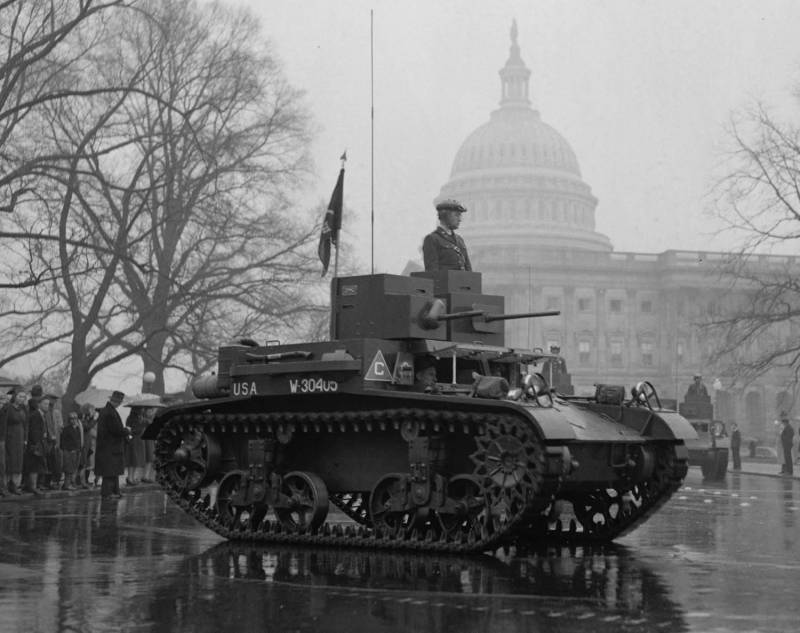 М2А4
In parallel with the T1 light tanks, the US developed the M1921 medium tank with improved armor and optimal dynamics. The vehicle weighed 23 tons and was armed with a 75 mm howitzer in a rotating turret. The cannon allowed a direct hit from a high-explosive projectile to completely destroy a light tank. However, after seven years of development, the tank never went into production due to its high cost.

With the onset of the Great Depression, the US command revised the armored concept. Now it was planned to equip the units with lighter, more mobile, and most importantly, cheaper equipment. In April 1934, Captain Rairey proposed a tank project with four machine gun sponsors and a new 37mm cannon in a rotating turret. After several modifications, the car received 25mm armor and a Continental engine, allowing it to reach speeds of up to 31 mph on the highway. In the summer of 1939, the M2 tank was finally put into service.

World War II forced the US government to change its views on armored forces. The Americans began work on more advanced vehicles, the first of which was the M3 medium tank. But this is completely different история.
For more details on the history of American tank building before the start of World War II, see the video from the creators of the famous game World of Tanks.