March 2 2021
11
Sweden did not take part in world wars, but the country has always been attentive to military affairs. After the first tanks the command immediately decided to buy several samples. The British sold their Mark II at too high a price, but in 1921 the Germans provided several Lk II light tanks without any extra difficulties. Once in Sweden, these machines were named Strv fm / 21. For a while, this was enough for the military.
In the late 1920s, the Swedish command had requirements for a new vehicle: a bigger gun, thicker armor, and a weight of no more than 12 tons. Soon, Landsverk presented the L-5 tank with a 37-mm gun and two machine guns. It did not pass the tests, but became the basis for the creation of the tracked L-10 and the wheeled-tracked L-30. However, they were not mass-produced either.


In the early 1930s, the L-60 tank was created in Sweden under the leadership of German mechanical engineer Otto Merker. It weighed 9 tons, was very crew-friendly and became the world's first production tank with a torsion bar suspension. A modified version of it - Strv m / 38, which remained in service until the mid-50s, went into service with the Swedish army.
Looking at the Denmark and Norway occupied by the Germans, the Swedes wanted to strengthen the army as much as possible. In the late 1930s, the country's leadership ordered a pariah of small machine-gun tanks (tankettes) from the Czech company ČKD, which were later adopted as the Strv m / 37. Despite their low combat value, they were excellent training vehicles that served until the end of the 50s.

In addition to tankettes, ČKD produced tanks LT vz. 38. After modernization, they received the Strv m / 41 index. The machines differed from the Czech prototype by a radio station in the turret and an engine. This technique began to be withdrawn to the reserve in the late 50s, but the chassis was still used for some time to create Pbv 301 armored personnel carriers. Another vehicle created on the basis of a Czech tank was the Sav m / 43 self-propelled gun. In a stationary semi-open wheelhouse, the designers installed a 75-mm cannon, and then re-equipped it with a 105-mm howitzer. A total of 36 copies were built, which served until the 70s.

By the 40s, the Swedish army had 2 types of modern light tanks. In 1941, the military formulated requirements for a heavier vehicle: frontal armor of at least 55 mm and a 75 mm cannon. The designers created the Strv m / 42 tank and put it into production at the beginning of 1943, but by that time the project was hopelessly outdated. Four years later, a new 4 mm long-barreled cannon was installed on the Strv m / 42 base. The anti-tank self-propelled gun with 75 mm frontal armor was named Pvkv m / 70. She was extremely uncomfortable for the crew, but in the absence of better options, I had to forget about the convenience.

After World War II, the Swedish military was captured by the idea of ​​re-equipping Strv m / 42 tanks with a more powerful artillery system. A shortened Lvkan m / 36 anti-aircraft gun with a new recoil system was used as a weapon. The updated tank received the index Strv-74. 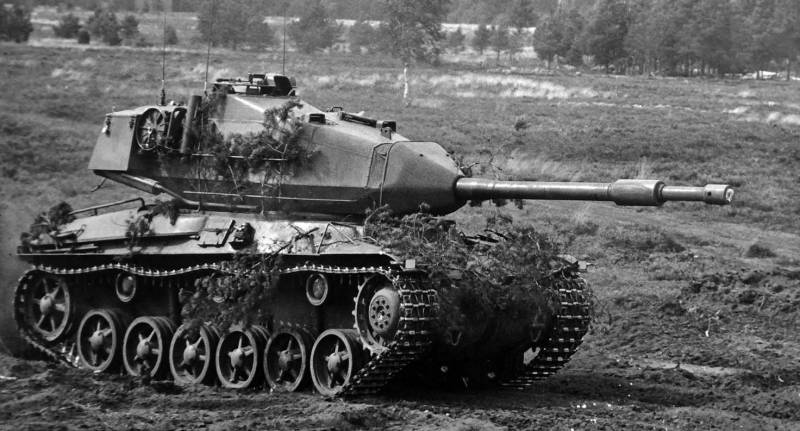 Strv-74
During the Cold War, the Swedish government was preparing for the worst, so a new Strv 103 tank quickly appeared in the country. It received a 105-mm cannon with an increased muzzle velocity, an automatic loader, a hydropneumatic suspension and a gas turbine as the main engine. Serial production began in 1966 and by the standards of that time it was a great machine (in theory, it could even float). Combat tactics on the Strv 103 were based on stealthily emerging from cover, destroying enemy vehicles, and quickly retreating. However, despite all its advantages, the vehicle turned out to be too complicated and expensive to get anywhere other than tank units.

But the infantry also wanted their tanks. The list of key requirements included high speed, maneuverability and the ability to fight modern tanks. The new Ikv 91 met almost all wishes. The vehicle was equipped with a 90 mm cannon, developed a speed of up to 65 km / h and even swam. The only nuance was the armor, which did not exceed 20 mm.

In addition to the production of serial cars, the Swedes experimented a lot. For example, they tried to make a heavy tank like the French AMX 50. This work was completed at the stage of a wooden model, but the development of self-propelled artillery installations bore fruit. This is how one of the most impressive machines in the world of tank building, the Bandkanon, appeared. It was equipped with a magazine for 14 155 mm rounds and fired them all in less than a minute. Due to the high firing range, the self-propelled gun could back up and change position even before the first projectile reached the target. The price for the uniqueness was the driving characteristics - the power of the Rolls-Royce K60 engine was clearly not enough.

The car received a turbine, and with it a huge fuel consumption - at one gas station Bandkanon could travel about 200 km. In 2003 self-propelled guns were sent to storage bases.

More details about stories tank building in Sweden - in the video from the creators of the famous game World of Tanks.