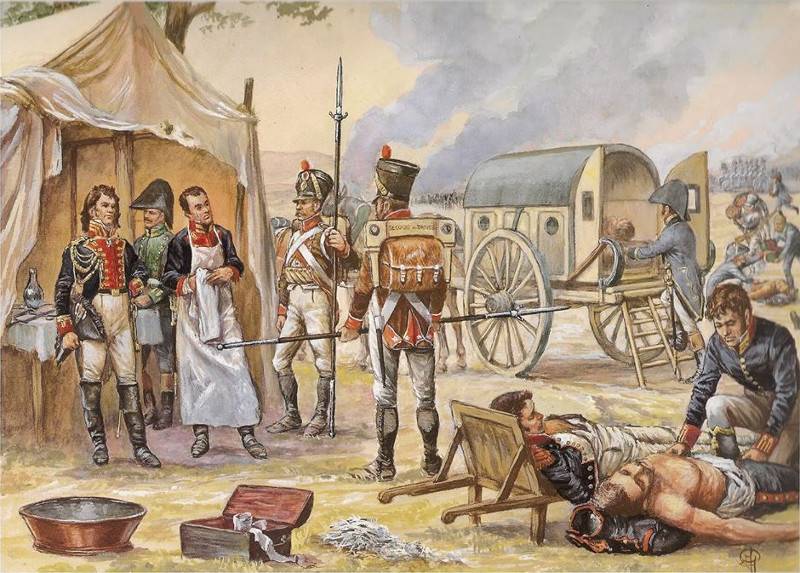 "Flying ambulance" in the painting by Jack Gearball. First on the left is Dominique Jean Larrey, the inventor of the volatile ambulances.

Transporting the wounded from the battlefield to infirmaries and rear hospitals was a matter of improvisation - especially during the first revolutionary wars.

In 1792, no transportation service existed at all.

The wounded were transported in ordinary peasant carts. In conditions that contradict all the principles of not only hygiene, but also elementary humanism.

Peasant carts, heavy and clumsy, shook on the broken roads. And the wounded (in a semi-conscious state from pain and loss of blood) endured real torment before they were hospitalized after such hell.

It should be added that, as a rule, local residents became sleds. And this means that if the battle was played out on enemy territory, one could not count on any mercy on their part in relation to the invaders. And since the transportation was carried out without the accompaniment of French soldiers, the sleds could choose the longest paths along the most broken roads. It was in the nature of things that many of the wounded died on the way, unable to bear the burden of evacuation.

In 1792, the book La Santé de Mars by Jourdan Lequinte was published, who for the first time publicly drew attention to such a barbaric attitude towards the wounded.

The result of the publication was a scandal, as a result of which the National Convention, by decree of November 18, 1792, obliged the Minister of War to submit a draft of such a cart that could provide a humane transportation of the wounded.

On the walls of Paris, posters appeared with calls for chariots and carts to send models or ready-made copies of carts to the competition. Although several dozen projects were submitted for the competition, none of them was approved.

In 1793, a repeated competition was announced.

But it did not bring the desired results either.

In the end, it was decided to order several dozen carts of the project, which the jury of the competition considered the most practical. But even they, at the first tests, turned out to be too heavy and clumsy in the battlefield conditions.

At the same time, the chief surgeon of the Rhine army, Dominique Jean Larrey, came up with the idea of ​​creating the so-called "ambulances volantes".

These carts were much lighter than ordinary peasant carts. They made it possible to carry out the evacuation of the wounded directly from the battlefield.

But Larrey managed to bring his idea to life only in 1797 during the first Italian campaign.

Its "volatile ambulances" have been developed in several varieties. During the Egyptian campaign, camels were harnessed to them.

However, they were not immediately recognized.

And their number was brought to a sufficient level only by 1812, that is, by the time the Moscow campaign was being prepared. They all disappeared in Russia. And in 1813, the means of transporting the wounded had to be rebuilt from scratch.

The slow implementation of the idea of ​​"volatile ambulances" did not mean, of course, that there were no other means of transportation in the Grand Army.

Until 1807, the suppliers were private entrepreneurs, primarily the Breidt company. However, their services were widely criticized.

In particular, the sleds, not wanting to risk their lives, hesitated to appear on the battlefield until the battle subsided and an attack from the enemy was no longer threatened.

In 1807, when the Breidt firm showed its complete failure during the first Polish campaign, Napoleon ordered the formation of eight transport battalions.

One of the tasks of these battalions was to provide the medical service with vans for transporting personnel, medical equipment and the wounded.

The vans, painted in the standard olive green, were covered with linen to protect them from rain and wind. An inscription was applied to the canvas indicating to which medical unit a particular van was attached.

However, throughout the revolutionary and Napoleonic wars, ordinary peasant carts were mainly used, requisitioned together with horses, and often together with coachmen. The peasants, however, preferred to hire themselves as sleds for several weeks to be sure that they would get their horses back.

Since 1807, Larrey's ambulances have been increasingly used.

The two-wheeled model, harnessed to a pair of horses, made it possible to transport only two wounded, but on a kind of stretcher, which allowed doctors to provide first aid to the wounded on the move.

However, such two-wheeled ambulances could only be used on flat terrain. In mountainous and hilly areas, a heavier, four-wheeled model, harnessed to two pairs of horses, had to be used. It could carry four wounded, laid in two tiers.

At the rate of Napoleon, there was always his personal ambulance. At the full disposal of his personal physician Alexander-Urban Ivan, who treated him after being wounded by a rifle bullet during the capture of Regensburg.

Based on materials from DJ Larrey and RW Hall. Memoirs of Military Surgery. Joseph Cushing, 1814.