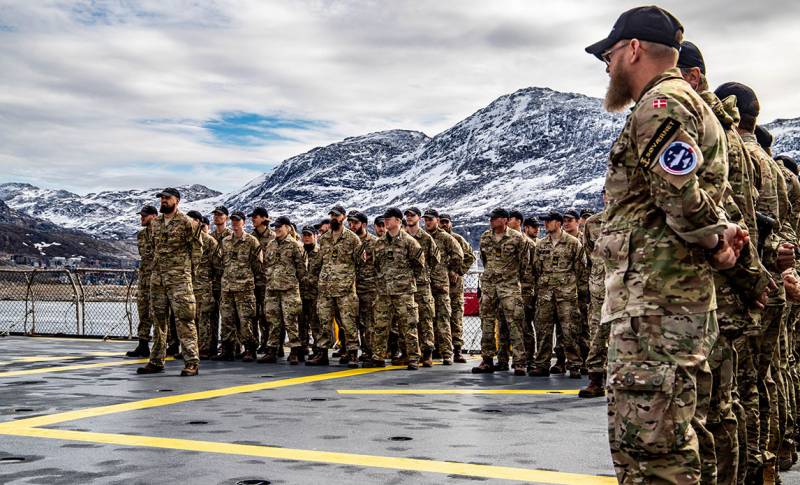 The Danish Defense Ministry decided to indirectly appeal to the new American administration. The main topic raised was “Greenland’s security”. Greenland is de jure an administrative territorial unit of Denmark.


The emphasis on the security of Greenland on the part of official Copenhagen was made due to the fact that the previous US President (Donald Trump) announced his readiness to buy this island from Denmark for its further exploitation in the interests of the United States. Then, as you know, an international scandal erupted, during which the Danish authorities announced that they did not intend to trade in their territories. But Trump continued, noting that, in his opinion, "the price of the issue is important."

Now the website of the Danish Ministry of Defense has updated information on which main areas of attention the command pays attention to from the point of view of ensuring the country's security and its interests. First of all, it is indicated that this is the Arctic region and specifically - Greenland.

The government will provide stability, security and protection for everyone in the Commonwealth, and will preserve the unity of the Kingdom of Denmark. Copenhagen, the Faroe Islands and Greenland have a special responsibility for security and defense policy in the Arctic and North Atlantic.
In other words, the Biden administration made it clear that Denmark is opposed to the topic of "a possible sale of Greenland". At the same time, representatives of the Danish military department had to touch upon a typical NATO "horror story" about "the growth of Russia's military activity in the Arctic and the need to respond to this threat."

From a message from the Danish Ministry of Defense listing its forces in Greenland:

In February 2021, the government and the country's largest parties entered into a framework agreement to allocate DKK 1,5 billion (about a quarter of a billion dollars) to ensure Arctic security. Arctic Command is headquartered in Greenland's capital Nuuk. The armed forces in the region are personnel at Nord station, which is the northernmost military base in the world (northeastern Greenland), the West air group in Kangerlussuaq (West Greenland), the armed forces guard in Mestersvig (East Greenland), Grönnedal (South- West Greenland) and a connecting element at the Thule base (Northwest Greenland).
So, Denmark makes it clear to the United States: we are ready to additionally fork out in the NATO format and even declare a Russian threat, and you do not raise the "Greenland issue".

Interesting logic: Greenland was offered to be bought from Trump, but the Kingdom's Ministry of Defense still designated the "Russian threat" as the main one. Such a relationship in an alliance ...