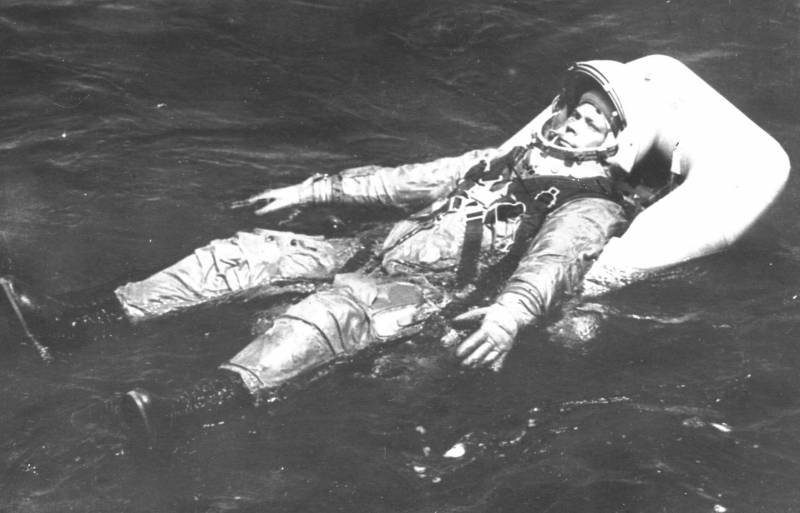 The work on the preparation of the first manned space flight was difficult, since many tasks were solved for the first time. And in some issues, there was no complete understanding of how a person would behave in space flight.

The decision to use the SC in space flight was returned only in August 1960. Through uncompromising persistence aviation doctors and physiologists. But the requirements for the suit and coolant have changed again.

Thus, Plant No. 918 (NPP Zvezda JSC) developed a space suit for Yu.A. Gagarin in less than eight months (in fact, six months). And many studies confirming certain characteristics of the spacesuit, ensuring the safety of the cosmonaut, without which human flight was impossible, were formalized by decisions and acts literally days before the launch of the Vostok-1 spacecraft. 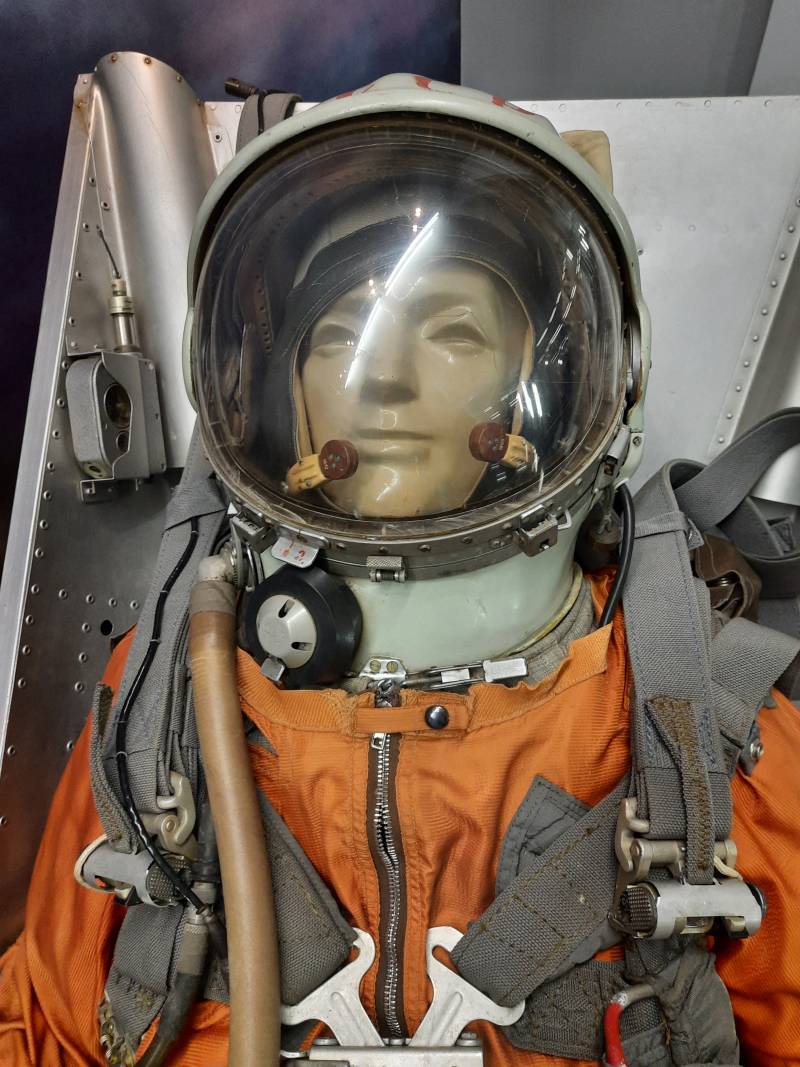 The successful development of the SK-1 spacesuit in such a tight timeframe is due to the fact that it was created on the basis of the Vorkuta aviation spacesuit and the existing developments for the first version of the C-10 spacesuit, having undergone a number of changes to adapt to the new requirements set by OKB-1.

In particular, unlike Vorkuta, the SK-1 was equipped with an irreversible pressure helmet with double glazing and a system for automatically closing the glazing in the event of a drop in barometric pressure below 400–450 mm Hg. Art. (equivalent to an altitude of 5 km). 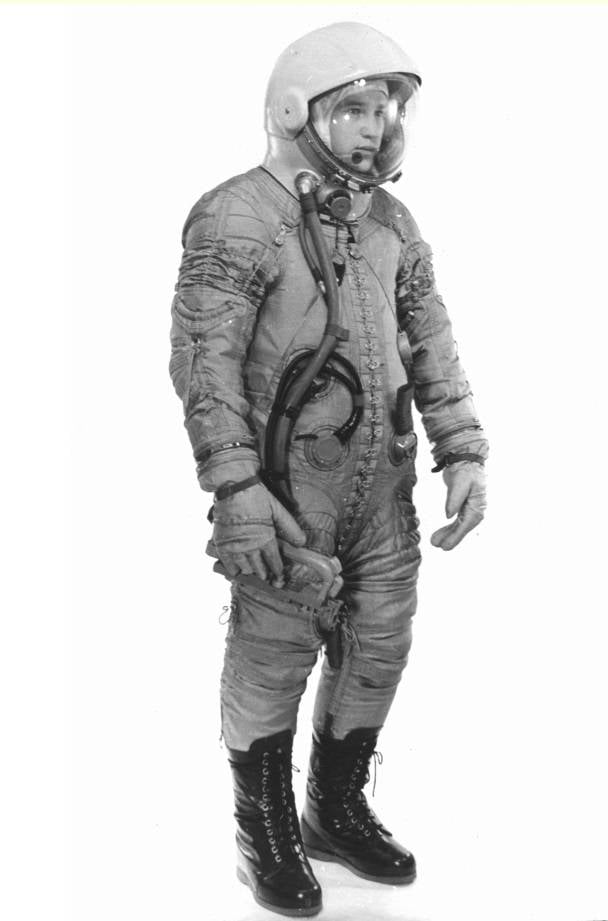 Structurally, the SK-1 was a classic soft-type spacesuit with an overpressure operating mode of 0,27 kgf / cm².

SK-1 had an inner (sealed) and outer (power) shell, on top of which an orange protective overalls were additionally worn, which facilitated the detection of the astronaut at the landing site and hid the general view of the spacesuit from Western special services. 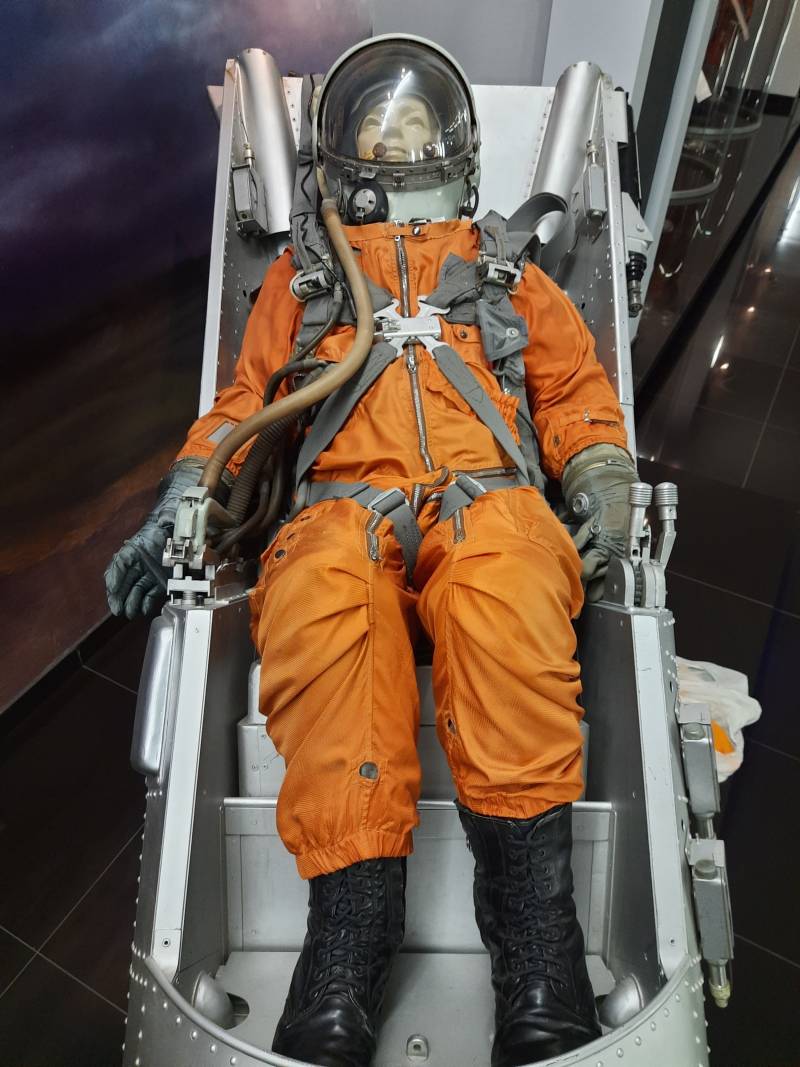 A heat-protective suit was worn under the spacesuit (in fact, it was a B-3 heat-protective suit, which was originally supposed to be used without a spacesuit). It provided protection for the cosmonaut during an emergency splashdown. It had a forced ventilation system for the spacesuit. In addition, the suit was used in combination with parachute boots, necessary to reduce injuries when landing on a parachute.

The spacesuit provided the possibility of a space flight in the normal mode for up to 12 days and up to 5 hours when the spacecraft was depressurized in orbit. In the event of an accident during the descent from orbit, the autonomous coolant ensured the safety of the astronaut for 25 minutes. To fulfill natural needs during a long flight, the spacesuit had a so-called small appendix.

At the stage of standard ejection at an altitude of 8 km, the spacesuit provided oxygen supply to the cosmonaut until his descent to an altitude of 5 km. Then the suction of atmospheric air began.

In case of splashdown, the suit had a swimming gate filled with a can of carbon dioxide. A heat-protective suit provided protection for the astronaut from hypothermia in cold water for 12 hours.

The difference between the SK-1 spacesuit and the Vorkuta aviation SC was that sheet rubber was used as the containment. While in Vorkuta, porous rubber (neoprene) was used, which at the same time served as a heat-shielding layer.

The power system SK-1 used a steel cable running along the sides of the body from the armpits to the power belt. Adjustment of the cable (adjustment to the height of the astronaut) was carried out by tension using a special drum.

During the most dangerous sections of the flight (launching into orbit and entering the dense layers of the atmosphere), the spacesuit was hermetically closed. When flying in orbit, it was allowed to open the glazing of the pressure helmet and remove the gloves.

In the event of a sudden depressurization, the helmet glazing was lowered automatically. If at the time of the accident the cosmonaut did not have gloves, then their role was played by inflatable cuffs, which hermetically sealed the sleeves, isolating the bare hands. In this case, the cosmonaut had 1–2 minutes, during which he could have time to put on gloves before the hands swelled from vapor-gas emphysema so that it would be impossible to put on gloves.

The SK-1 spacesuits were used on the Vostok spacecraft. But (as experience gained in real space flights), modernization was constantly carried out for each subsequent flight.

In particular, on the basis of the SK-1 for Valentina Tereshkova, a “female” spacesuit “SK-2” was specially developed, adapted for female anthropometric features.

Ctrl Enter
Noticed oshЫbku Highlight text and press. Ctrl + Enter
We are
List of destroyed the largest and most high-tech enterprisesRussia: the Moon, Mars and further everywhere ... Speeches of the participants of the Izborsky club in the corporation "Rosobschemash"
Military Reviewin Yandex News
Military Reviewin Google News
33 comments
Information
Dear reader, to leave comments on the publication, you must sign in.