Lip castle and its terrible ghosts 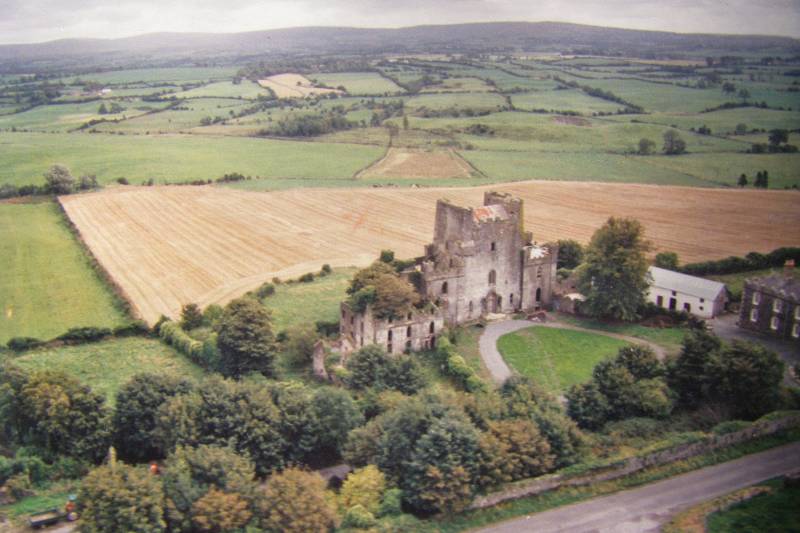 May the angels of the Lord protect us! -
Blessed are you or accursed spirit
Covered by the sky or you breathe hellish,
Filled with evil or good intentions, -
Your image is so mysterious that I
I appeal to you: Hamlet, master,
Father, sovereign Dane, answer me!
Don't let me burn out in ignorance, tell me
Why are your buried bones
Tore apart their shroud; why the tomb,
In which you were peacefully reposed,
Opening your heavy marble grin,
Have you erupted again?
(Hamlet, Prince of Denmark. William Shakespeare. Translation 1933 by M. Lozinsky)
Stories about castles. After the publication of the material "Towers among the rocks»Quite a large number of VO readers approached me with a proposal to continue the theme of castle towers, only in Scotland and Ireland, where there are a lot of such tower castles. And - yes, indeed, the castles in these countries deserve to learn more about them. Here is at least the same Ireland, which in the Middle Ages, and even now, is called the "green island". That is why they say that there really is a lot of green grass growing there. But there are also a lot of medieval castles there, even more per unit area than in neighboring Great Britain. And as we all well know, in many castles - well, it happened so historically, for some reason ghosts are "found". And the castle with the short name Lip turned out to be the most, if I may say so, the castle rich in terrible ghosts in Ireland. About him, about his battle stories, as well as about what sometimes happens there, and our story will go ... 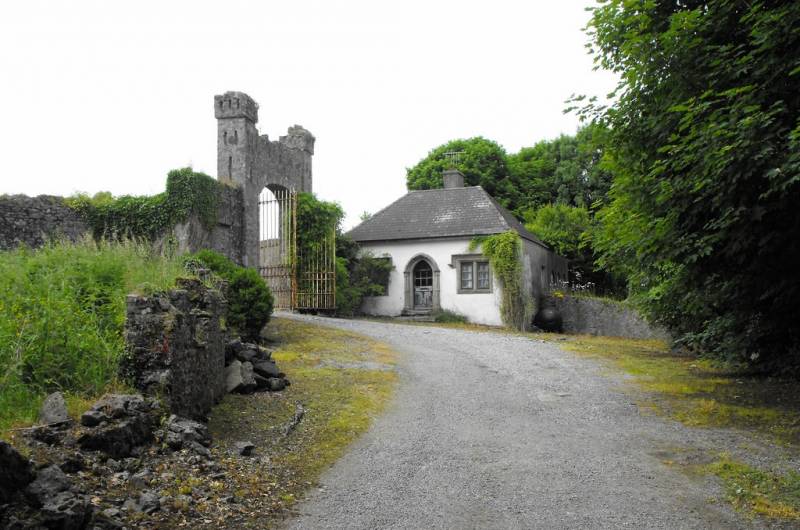 The gatekeeper's guard at the castle gates

On the foundation of a pagan temple ...

There are different versions of when and by whom this castle was originally built, but the most realistic date is 1250. That is, at this time it already existed, or they were just starting to build it. Although there are researchers who date its appearance to the XNUMXth or even the XNUMXth centuries. The land on which Leap was built belonged to the O'Bannon clan, and he himself was first called "O'Bannon's Leap" or simply "Leap". But the members of the O'Bannon clan, although they were rich enough to build a castle for themselves, were not the main lords, but were in vassal dependence on the stronger O'Carroll clan. It is believed that at the base of the castle there is a stone building dating back to the Iron Age, which served as its foundation. Naturally, today everyone is talking about the fact that it was an ancient pagan temple. 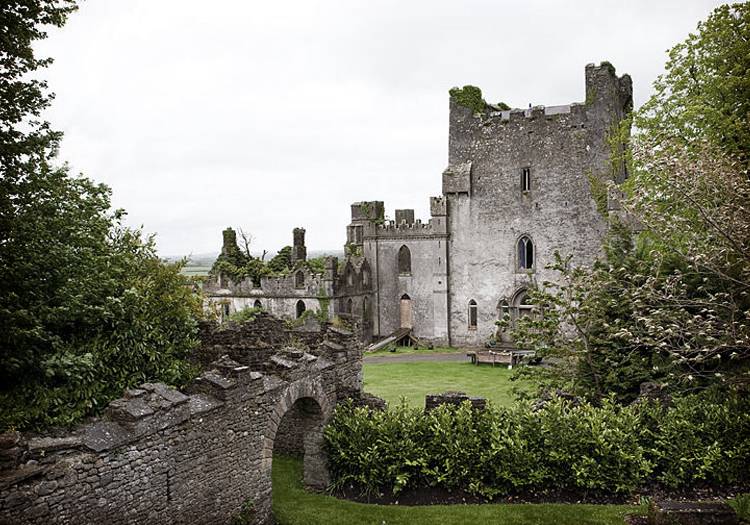 By its design, "Leap" is a real tower-house, to which later extensions were made. It was customary to build such castles both in Ireland and Scotland, and many of them have survived to this day, and we will talk about them in the following materials. It turned out, however, that the O'Bannon clan built it, and in the end it became a home for the O'Carroll clan. In 1513, the castle was attacked by the Earl of Kildare, who tried to capture it, but to no avail. The second time he attacked it in 1516 and managed to partially destroy it. 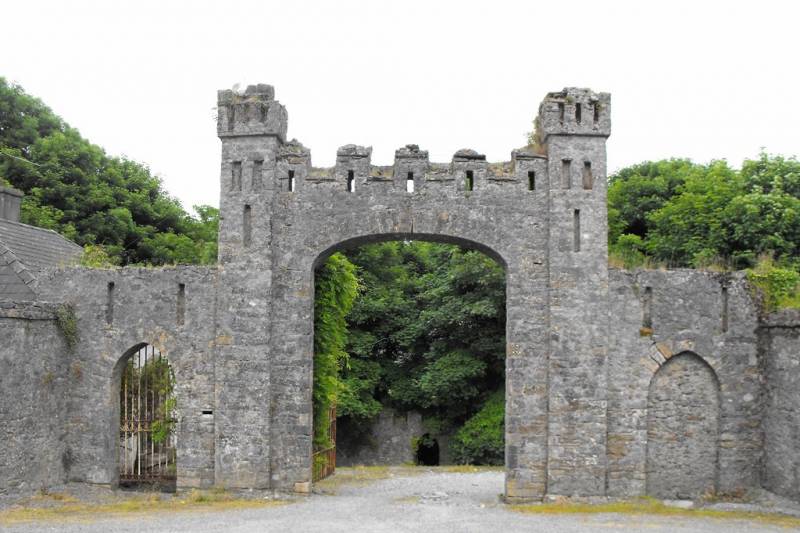 Gate to the castle
In 1558, the owners of the castle set it on fire and destroyed as best they could, just to prevent its capture by the troops of Queen Elizabeth. But a year later, the O'Carrolls rebuilt it. Then, already in the 1922th century, the castle was rebuilt, and then the Darby family settled in it. The Darbies expanded the castle and added a large structure to the north side of the tower house. But this castle was also not lucky: it was destroyed, but already in the twentieth century, in XNUMX, when a civil war was going on in Ireland.

There is no hate stronger than brotherly

In the Middle Ages, a fierce struggle for power between the brothers began in the family. According to feudal customs, the older brother was to inherit the castle, and the younger one was to become a priest, but he did not lose the right to property. And it so happened that when the priest brother was celebrating mass for the family members in the castle chapel, his rival brother rushed in there with a sword in his hand and mortally wounded him right at the altar. In memory of this terrible and godless deed, this place was named "Bloody Chapel". Well, it is clear that the ghost of the murdered person immediately began to appear in him. 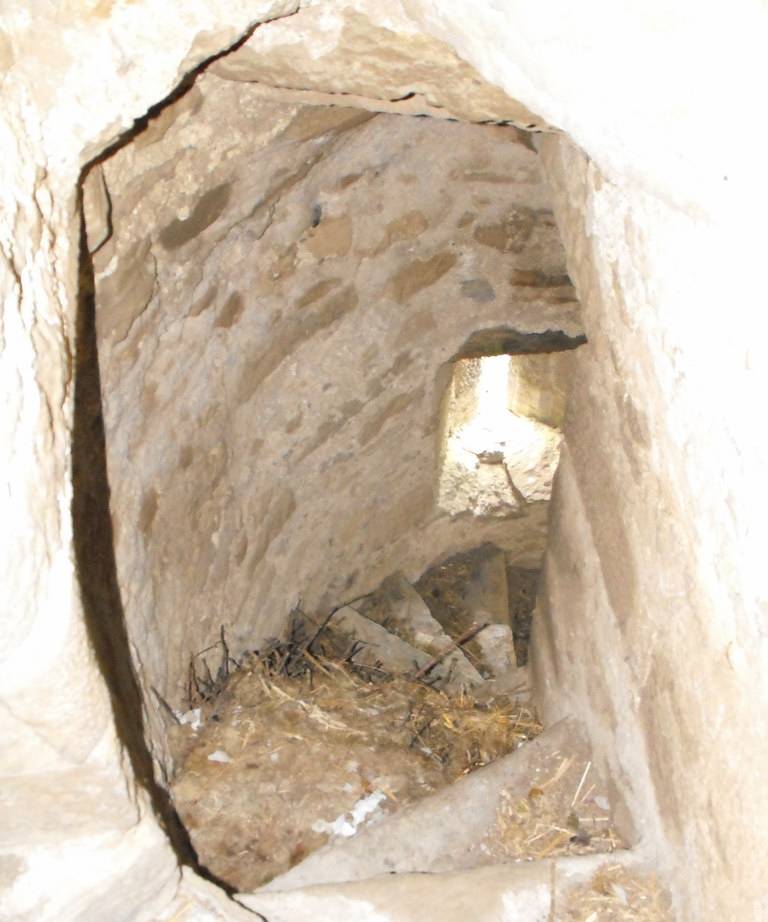 From one owner to another ...

In 1659, the castle passed to the Darby family through marriage ties, among whose members were several famous British admirals. Mildred, the wife of one of the Darbies, wrote gothic novels. On their pages, she first told about this castle and about its ghosts, which aroused great interest in it from the public. The Darbies expanded the castle considerably, but to pay for the construction, they raised tenants' fees, and sold some of the land altogether. The peasants, of course, did not like this, so they burned this castle in 1922. The Darby family's total claims for the destroyed castle were £ 22, equivalent to approximately € 684,19 million in 1 prices. As a result, the claim was settled for a lower amount. 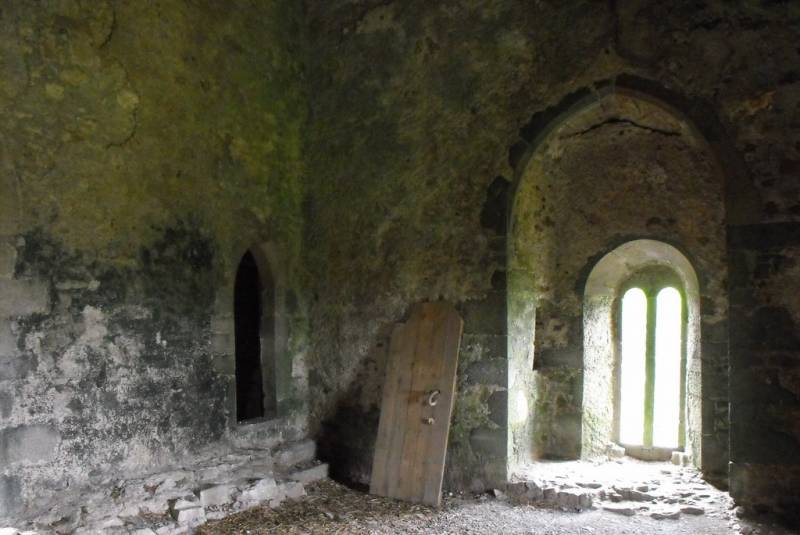 While working on the reconstruction of the castle, workers in one of the halls of the lower floor found a mine, at the bottom of which sharp iron spikes were sticking out and ... there were many skeletons! It took as many as three carts to take out all the bones from there. It is believed that at least 150 people died in this pit. Obviously, there was an opening hatch in the floor here, similar to the one shown in the television series Death Archive, and that O'Carroll either threw his guests through it, who had already been killed, or simply invited them to stand in this place. after which they fell into this terrible pit and sat on the thorns. A pocket watch found among the bones, dating from the mid-1800s, suggests that the owners of the castle continued to use this pit until the very mid-XNUMXth century! 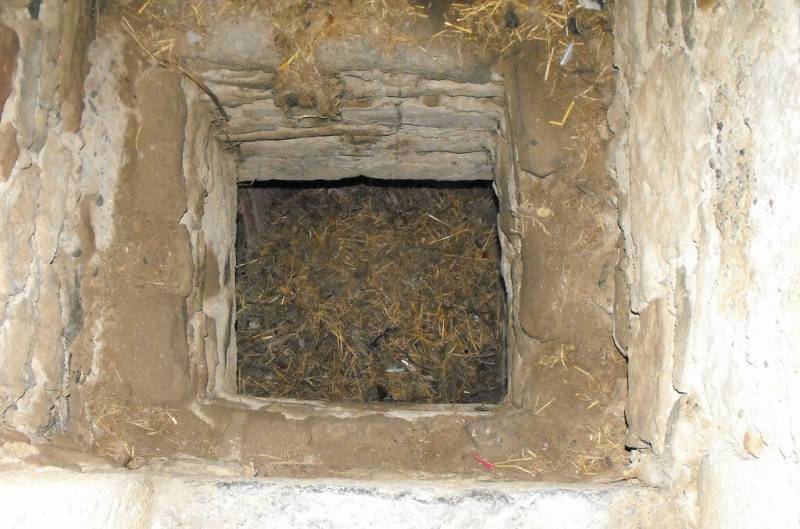 Here it is - this terrible pit!

The first floor of the castle has today been almost completely restored, and you can see a beautiful medieval fireplace in it, although there is no carving on it. A steep spiral staircase leads from the first to the upper floor, where the famous "Bloody Chapel" is located. All the windows in the castle were made later, after the completion of its construction, but they are still fine examples of late Gothic architecture. The castle wings are also more recent, and the Ryan family lives in one of them. The north wing is abandoned and too dangerous to inspect, although it also has a beautiful fireplace. You can come to the castle, and for a small fee the owners will show it to you - this is a tradition that has survived in England to this day. 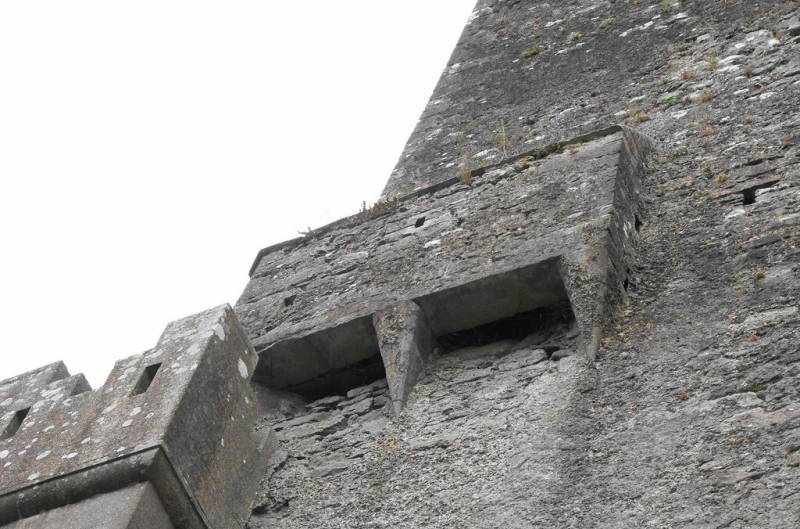 What kind of ghosts appear in the castle?

There are surprisingly many ghosts in the castle, which, however, is not surprising, considering how many human souls were killed there. The first and most harmless ghost is the ghost of that same unfortunate priest who was stabbed to death by his own brother. He just appears in the corridors, passes through them ... and that's it. They also see light in the windows of the chapel at night, although electricity has not been supplied there even today. 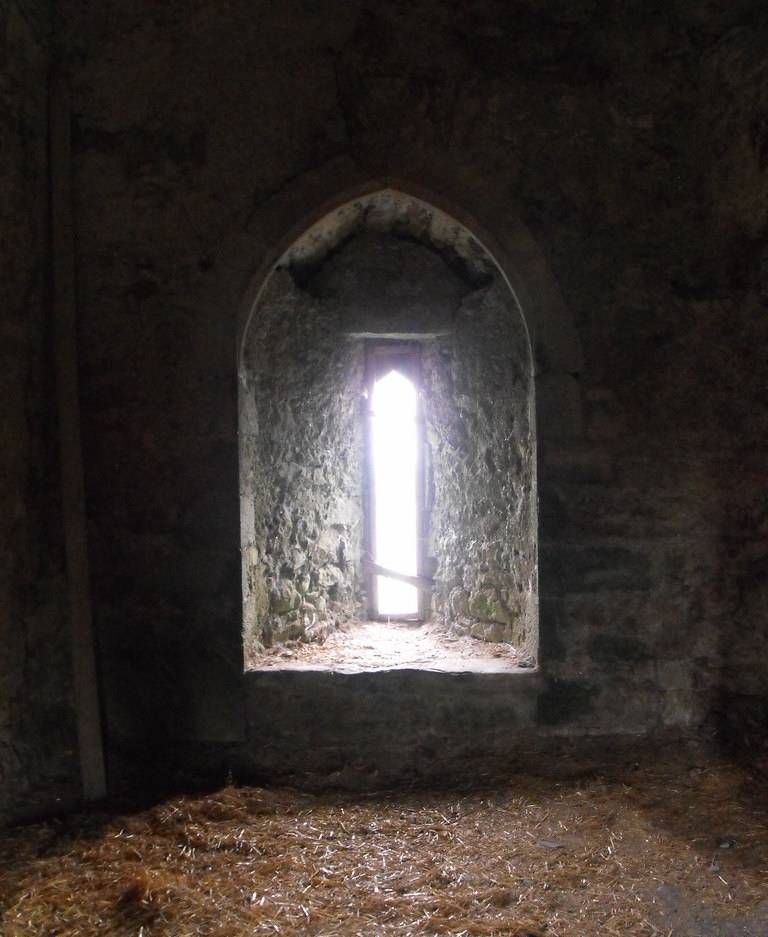 Sometimes lights are on in the windows of the castle
There are two ghostly girls running around the castle and playing in the great hall. It is believed that in the XNUMXth century they fell from the castle wall and shattered, but their souls never found rest. The groans of the dying are constantly heard from the dungeon. Obviously those who were thrown into that terrible pit. True, today there is nothing in it, although the pit itself is perfectly preserved. The ghost of the Red Lady roams the halls with a dagger in hand. It seems that she was a prisoner of one of the O'Carrolls, gave birth to a child from him, and when the rapist killed her child, she stabbed herself with a dagger out of grief. Such is a typical medieval story, completely in the spirit of Walter Scott.

But the most mysterious and truly terrible ghost of the castle is, of course, the "elemental".

An eyewitness of the XNUMXth century told ...

In the XNUMXth century, there is a record from Mrs. Jonathan Darby about her encounter with a ghost called an "elemental." It looks like this:

“The creature was the size of a sheep, thin, emaciated and in places translucent. His face was human, or, to be more precise, inhuman, in its abomination, with large black holes instead of eyes, slobbering lips and thick saliva dripping from his jaws. He had no nose, only rotting cavities, his whole face was of a uniform gray tint. The coarse hair that covered his head, neck and body was the same color. Its front paws were thickly covered with the same hair as its hind legs, and when it sat on its hind legs, one arm or paw was raised, and a finger like a claw pointed in my direction. His shiny eyes looked incredibly dirty and oozed pus, and they looked me straight in the eyes, I could smell a terrible smell, which before offending my nostrils, only now it intensified a hundred times, rose right into my face, filling me with deadly nausea. I noticed that the lower half of the creature was kind of vague and at least seemed translucent, so I could see the frame of the door that led to the gallery through its body. "

A very accurate, even too accurate description, isn't it? And you have to stand in front of such a creature long enough to look out for all these details, or to encounter him quite often. 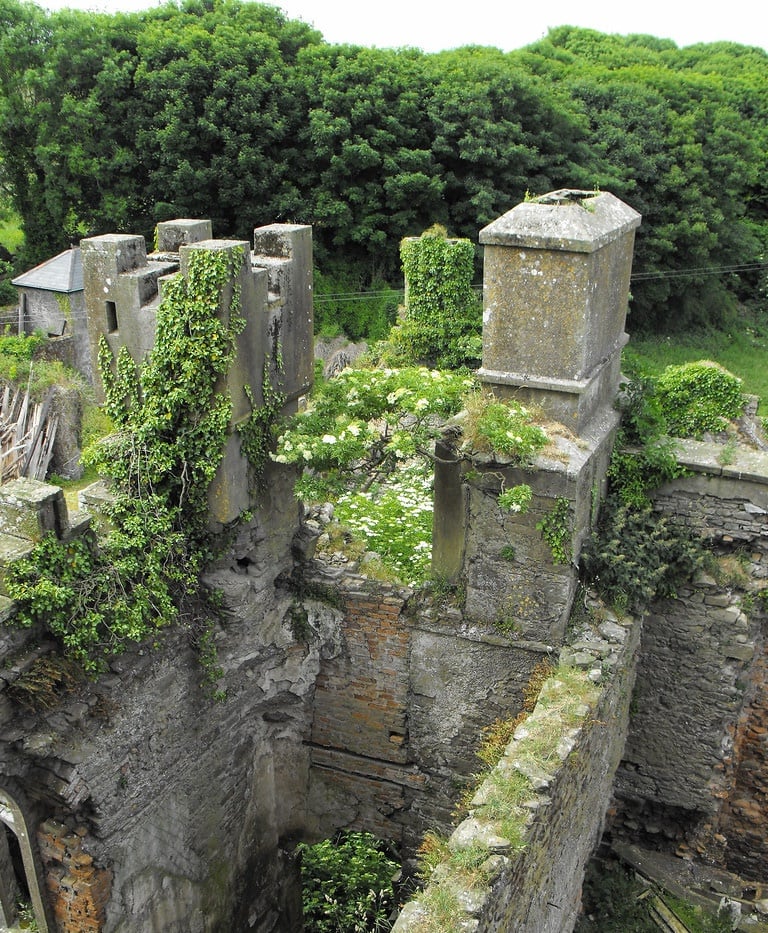 Part of the buildings of the castle is half destroyed 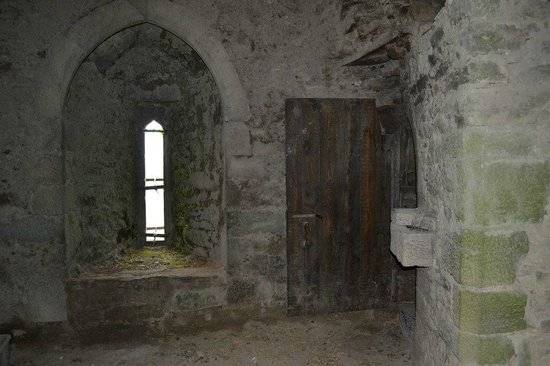 Many rooms of the castle have not been restored until now

Today ghost hunters are frequent visitors to this castle, including members of the Atlantic Society of the Paranormal (TAPS). In August 2014, the Travel Channel even aired the Ghost Adventures TV movie, filmed in this very castle. It said that it is "the most frequently visited castle in the world." But, most likely, this is the usual journalistic exaggeration of a purely advertising nature!

Ctrl Enter
Noticed oshЫbku Highlight text and press. Ctrl + Enter
We are
My grandfather's front-line letters (part 2)Advice of the Minister of War field marshal D.A. Milutin to an officer appointed to a higher command or staff position
Military Reviewin Yandex News
Military Reviewin Google News
318 comments
Information
Dear reader, to leave comments on the publication, you must sign in.