The orbital group of the Russian Aerospace Forces "under the gun" of the British Typhoon fighters. Are the next Whitehall dreams realizable in practice? 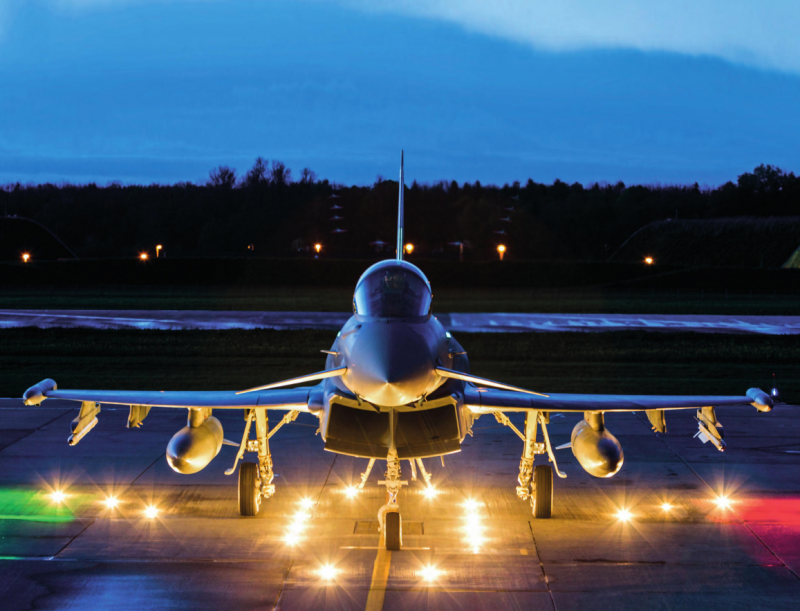 In light of the repeated increase in the degree of operational and strategic tension in the Baltic and Azov-Black Sea conventional theaters of military operations observed over the past several weeks, provoked by nothing more than the emergence of an even more sophisticated anti-Russian military-political vector of the administration of the 46th US President Joe Biden, Information about the first conceptual steps of a fundamentally new (in Whitehall's practice) branch of the military - the Royal Air Force of Great Britain, could not have attracted attention.

An ambitious concept of aerospace confrontation from the UK Space Force. Should the command of the Russian Aerospace Forces be puzzled?

In this case, formed a year earlier (by analogy with the US Space Force) on the basis of the 23rd aviation AWACS squadron (has radar patrol and guidance aircraft E-3D AEW Mk.1 "Sentry"), the operational command of the Space Forces of the British Air Force is working on preparations for an aerospace exercise, providing for a conditional ("digital") interception of Russian and Chinese reconnaissance satellites operating on low-earth orbits, by means of the "Typhoon FGR4 / Tranche 4/2" multi-functional fighters of the "3+" generation, which are in service with the Royal Air Force of Great Britain, as well as the advanced "Typhoons" of the transitional generation "4 ++", which are being prepared for operational readiness. airborne radars based on active HEADLIGHTS E-Scan Mk 1/2 (also known as "Captor-E Mk1 / 2").

As exoatmospheric (transatmospheric) interceptors, virtual “digital” models of which will be loaded into simulation software “add-ons” of weapons control systems of combatant “Typhoons” for conducting exercises, the British press, referring to Whitehall, presented completely abstract “anti-missiles” without clearly indicating indices , not to mention their flight performance and guidance principles.

The following questions arise: what kind of exoatmospheric interceptors can we talk about, and how feasible is the above concept of the British Air Force Space Command to counter our and Chinese orbital groupings in the aerospace sectors of real theaters of war of the XNUMXst century?

It is worth noting the fact that the concept of the above exercise involves the removal of the launch lines of conditional ("virtual") interceptor missiles outside the dense layers of the troposphere and stratosphere (by means of the exit of "Typhoons" carriers to the dynamic ceiling of 18300-19000 m near the Armstrong line) a multiple reduction in their aerodynamic drag, which ultimately should ensure a more efficient use of the energy potential of solid-propellant charges of the launch and acceleration-march stages with a total reduction in the time for the launch of kinetic interceptors to the orbital areas of the intended meeting with intercepted reconnaissance satellites.

At the same time, the possibility of detecting and capturing intercepted satellites for "precise" autotracking by means of the Captor-M / E onboard radar of Typhoon fighters (with further target designation to interceptor missiles), voiced by British experts, completely contradicts the above-described exoatmospheric interception technique.

It is well known that the energy potential of the promising Captor-E Mk 2 onboard AFAR radar (not to mention the outdated Captor-M radar based on slot antenna arrays) ensures the detection of radio contrast objects with an effective reflecting surface (EOC / EPR) 5 –10 sq. m at a distance of about 250-300 km.

Therefore, it is logical to assume that, for example, the promising Pion-NKS and Lotos-S satellites of the Liana system orbiting the Earth with a perigee of 250–270 km will be tracked by the Captor- E "only at the moment of being at an angle of 90 degrees relative to the horizon (and even then only if the upper limit of the instrumental speed of tracked targets allows, which, for example, for the Irbis-E radar is 5500 km / h).

Consequently, even if Captor-E manages to "tie the track" of the receding satellite (which is extremely unlikely) and transmit target designation to the interceptor missile, the latter will need to intercept the satellite on a catch-up course at a speed of about 9 km / s.

As you know, even the most modern ground-based ("Aegis Ashore") SM-3 Block IIA missile, which is to be equipped with advanced exoatmospheric kinetic interceptors of the Mk 142 / MKV / UKV lines, does not possess such speed parameters, the upper speed limit of which in the thermosphere reaches 5600 m / s ...

In the case of the use of interceptor missiles launched by Typhoons on advance target designation issued either by a ground-based high-potential AFAR-MRLS type AN / TPY-2 of the THAAD anti-missile system, or by the S1850M shipborne surveillance radar (installed on Type 45 destroyers of the Daring class), interception Such orbital targets on counter-intersecting courses may become quite feasible, which will require equipping our and Chinese reconnaissance satellites with appropriate laser-beam complexes for optoelectronic countermeasures to infrared seeker of endoatmospheric kinetic interceptors of the enemy.

Ctrl Enter
Noticed oshЫbku Highlight text and press. Ctrl + Enter
We are
Situational analysis of the death of the MH17 flight (Malaysian Boeing 777), made on the basis of engineering analysis from 15.08.2014Features of national democracy
Military Reviewin Yandex News
Military Reviewin Google News
24 comments
Information
Dear reader, to leave comments on the publication, you must sign in.