What Russia received from "grateful" Europe for the victory over Napoleon 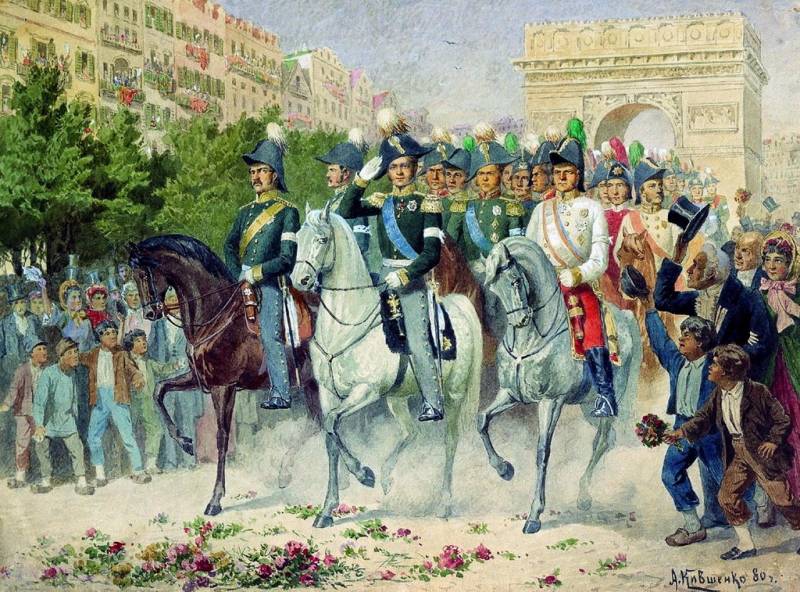 Painting by Russian artist Alexei Kivshenko: "The entry of Russian troops into Paris in 1814"

How Russia was "thanked" for the victory over the French Empire

In 1812, the Russians, without the help of England, defeated 600 thousand French army. At the same time, 2/3 of the "Great Army" were not French, but various Germans (Prussians, Bavarians, Württembergians, Saxons, etc.), Poles, Italians, Spaniards, etc. It was only in the spring and summer of 1813 that Russia had real allies who, seeing that Napoleon's empire was bled, broke the alliance with Paris and opposed France. England provided Russia and Prussia with several million pounds for the war with France.

Napoleon abdicated the throne. The division of the "skins" of the French empire began.

At the Congress of Vienna, it was decided that England, Austria and Prussia will receive large increments in Europe, and the British also in the colonies. But Russia, which actually destroyed Bonaparte's war machine, and then liberated Europe from French domination, received nothing!

I repeat, without the Russians there would have been no victory over Napoleon.

Even after the terrible catastrophe of 1812, if the Russian troops (as suggested by the wise Kutuzov) did not go beyond their borders, the French could retain a significant part of their positions in Europe. England would have to strain forces and resources to push the French back to their historical territory. The war between the great Western powers would have lasted another ten years. Meanwhile, Russia could close the issue with the Bosphorus and the Dardanelles, Constantinople. To decide in their favor the affairs in the Caucasus and the Far East.

Austria and especially England strongly objected to the transfer of the Warsaw area to Russia, and to Prussia a part of Saxony. The British needed Poland in order to use the Polish "ram" against the Russians. Austria did not want the strengthening of Prussia in the German world. It is clear that St. Petersburg wanted to receive lands inhabited by ethnic Poles who had never entered Russia. But our "allies" also offered not independence to these regions, but their annexation to the Austrian Empire. Why did Russia have to give up the strategic foothold from which the invasion of 1812 began? It was reasonable to take Warsaw and engage in the pacification of the Poles, the fraternal Slavic people, and turn them into a part of the imperial society. Take away from the West one of the instruments of aggression directed against Russia.

It is also worth noting that Britain did not return Malta to us either.

The British had no rights to the island. The British Isles could not be threatened from Malta. The only argument was the war with Napoleon. But in 1814, Russian and allied troops entered Paris. War is over. It was possible either to restore the independence of Malta, returning it to the Order of Malta, or to transfer the island to the Kingdom of the Two Sicilies (the nucleus of the future united Italy), which was located only 90 miles from the island.

However, a double standard prevailed at the Congress of Vienna - one for the "Russian barbarians", the other for the "enlightened" British pirates. Malta ceded to England, which had no rights to the island, except for the right of the arrogant and strong. The British turned the island into their colony and naval base, a stronghold of power in the Mediterranean.

In January 1815, a secret alliance was concluded between Austria, England and France, directed against Russia. Bavaria, Hanover and the Netherlands could join the agreement.

That is, they just defeated Napoleon, and “grateful” Europe immediately creates an alliance against the Russians.

Rhetorical question: why did hundreds of thousands of Russian people give their lives?

It is interesting that the “enemy of the human race” Napoleon helped Russia. He left Elba, landed in France, the people and the army greeted Napoleon with delight. The Bourbons have already grown to hate. Napoleon's trick greatly frightened the allies. They were forced to make concessions.

On April 21 (May 3), 1815, the Russian-Prussian and Russian-Austrian treaties on the division of the Duchy of Warsaw were signed in Vienna. Austria received four counties of Eastern Galicia (Old Russian lands). The Saxon King Frederick Augustus ceded to Russia most of the Duchy of Warsaw.

Thus, Russia, having suffered huge human, material and cultural losses during the wars with France in 1805–1807 and 1812–1814, received only a piece of Poland. And the source of future problems (Polish uprisings).

In the early 1820s of the XNUMXth century, relations between Russia, England and the United States in the Alaska region worsened.

The possessions of the three countries did not have clear boundaries. Moreover, the United States and England, forgetting about their differences on this issue, acted together against the Russians.

Anglo-American fishermen have arrogated to themselves the right to catch valuable sea animals off the coast of Russian America. They also freely pushed ashore anywhere and traded with the natives. The British and Americans sold to the natives mainly alcohol and weapon... It was unimaginable that a Russian ship would land on the possessions of England or on the east coast of America and begin to illegally trade weapons and vodka. The Anglo-Saxons would have immediately responded with a military action, and St. Petersburg also had to apologize.

Interestingly, the British and Yankees also behaved not only in Russian America, but also in the Russian Far East, including Kamchatka and Chukotka.

By this time, Russia was at the peak of its military power, was considered a "European gendarme". In the event of a conflict with the Americans, the Russian fleet could block all American communications in the Atlantic and put the United States in a very difficult economic situation.

It was more difficult with England. The Russians dominated the land, Britain ruled the seas.

In September 1821, Tsar Alexander I decided to restore order in Russian territorial waters and on the coast in the Far East and in Russian America. Foreign ships were forbidden to dock on the Russian shores and islands, and to approach them at a distance of less than 100 miles. Violators were confiscated with all cargo.

To show the seriousness of Russia's intentions, the Maritime Ministry sent a 44-gun frigate "Cruiser" and a 20-gun sloop "Ladoga" to the shores of Alaska. The commander of the detachment and the frigate was Captain 2nd Rank Mikhail Lazarev, and the Ladoga was commanded by his brother, Captain Lieutenant Andrei Petrovich. In August 1822, the ships left Kronstadt, and in the fall of 1823 arrived in Novo-Arkhangelsk. The emergence of the Russian military fleet made the right impression on western predators.

Unfortunately, at that time the Russian Foreign Ministry was headed by the Westernizer K. Nesselrode. He was a supporter of the active course of Russia in Western Europe (the fight against the revolution within the framework of the Holy Alliance), and considered all other directions, including Russian America, to be secondary and unnecessary. He convinced Emperor Alexander to make substantial concessions to the United States.

In April 1824, the Russian-American convention on freedom of navigation, trade and fishing in the Pacific was signed. It is clear that all the benefits of such "freedom" went to the Americans. In February 1825, the corresponding convention between Russia and England on the delimitation of spheres of influence in North America was signed in St. Petersburg. Russia made concessions on the territorial issue.

The fact is that the Russian-American company did not actually have a land border with British Columbia. The Russians owned the edge of the coast and did not develop land inland. In addition, the Stone Mountains (Cordillera Coastal Range) interfered with this. The mountains ran almost parallel to the ocean coast and in different places were 11-24 miles from the water. Over the mountains lay the possessions of the British.

Russian colonists and local residents believed that the natural border was the tops of the ridge, the western slopes belonged to the Russians, the eastern ones to the British. At the same time, the Russians did not go deep into the continent, although for almost half a century there was an uninhabited territory.

From the beginning of the 20s of the XIX century, London decided to seize the coast, which was developed by a Russian company. The British proposed to establish the border between English and Russian possessions. At the same time, the Russian-American Company believed that the border would pass along the natural boundary of the mountains and that its establishment would not be difficult.

However, the Russian Foreign Ministry capitulated to the British on the land border issue.

Now the border ran along the entire length of the coastal strip, which belonged to the Russian Empire, from 54 ° N. sh. up to 60 ° N sh. along the tops of the Coast Range mountains, but not further than 10 nautical miles from the edge of the ocean, taking into account all the bends of the coast.

That is, the line of the Russian-English border in this place did not pass through natural barriers and was not straight (as was the case with the border line of Alaska and the then Northwest Territories).