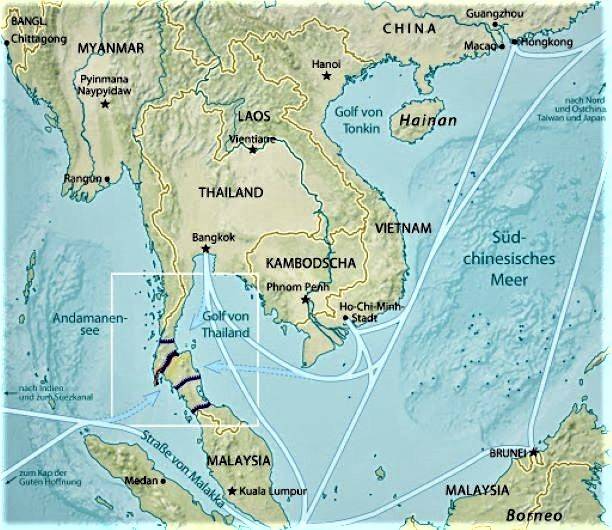 At the beginning of the twentieth century, in order to build "its" Panama Canal, the United States separated the Panama region from Colombia. But with the Kra Isthmus (on the map it is higher than the uppermost Thai jumper), this is unlikely to happen: this cannot be allowed by communist China ...

The recent military coup in Myanmar (The coup everyone knew about) is not without reason regarded in the West as a factor in the further strengthening of Beijing's influence in this country. But such an assessment is very “flawed” for a number of reasons.

Among other things, and because "aggressive" China has long initiated and, in addition, plans to finance the construction of a shipping canal between the Pacific and Indian oceans. It can pass through the Kra Isthmus in the south of Myanmar or in the borderlands of Myanmar and Thailand.

By the way, we cannot exclude the implementation of two projects at once. So far, a specific route has not yet been chosen, but the scales after the coup in Myanmar are tilted, oddly enough, in favor of the project through this country. Stability, albeit with guns in hand, clearly attracts investors like the Chinese.

The project is already at least 250 years old: it was first developed by the French engineer de Lamar in 1677-1678 ... But interest in the project became real only when the Strait of Malacca became really crowded. 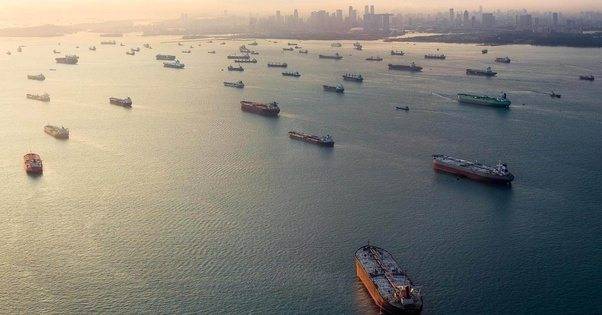 Driving the courts around half of Indonesia is, you see, not a business. China already has, for example, an oil and gas pipeline in Myanmar since the early 2010s.

It is through these arteries that not only Burmese, but also Middle Eastern raw materials are still supplied to the PRC from the seaports of Myanmar (Between the United States and China: why Myanmar has become a field of competition between powers?).

Also, the PRC has its terminals in this country on the coast of the Indian Ocean. 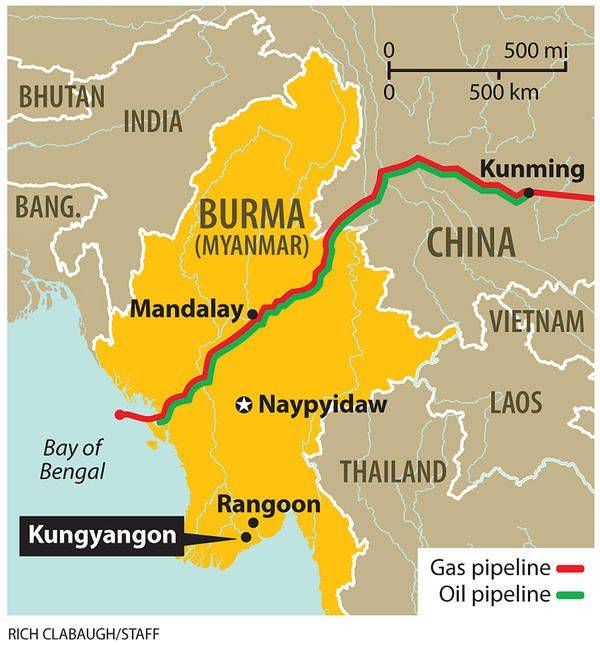 The construction of the "trans-Burmese" canal will all the more strengthen Beijing's position not only in Myanmar, but also in the Indian Ocean basin. Especially taking into account Beijing's planned construction of a railway through Myanmar - to the ports of Chittagong and Cox's Bazar in the east of Bangladesh, located near the border of this country with Myanmar.

All this hardly meets the interests of the United States and the West as a whole. In mid-June 2017, a Sino-Thai intergovernmental agreement was signed to finalize the project of an interoceanic shipping channel across the narrow Kra Isthmus near the Thai-Myanmar border.

At the same time, there is a similar agreement between the PRC and Myanmar in the early 1980s, providing for the creation of this artery mainly through the territory of this country. Up to 80% of the total financing for the implementation of projects is planned at the expense of state and commercial investments of the PRC.

Under the military authorities in Myanmar, who ruled the country in the 1960s and early 2010s, it turned into the most important political and economic outpost of the PRC. The same authorities refused the participation of the West in the finalization and implementation of the channel's project, preferring to actively cooperate with the PRC in such a project.

It seems that it was this factor, and not the “chronic usurpation” of power by the Myanmar military, that became the root cause of the sanctions imposed in 2003-2005. against it, the United States and other NATO countries, as well as the UN. In 2012-2014 the sanctions were lifted due to the restoration of civilian state institutions in the country and, accordingly, parliamentary democracy.

The coming of the military to power in Myanmar in February 2021 is regarded in the West as the return of the country under the "tutelage" of the PRC. This, in turn, may lead to the implementation of the "pro-Chinese" project of the Kra-Canal - that is, precisely through Myanmar.

Only sanctions, nothing personal

According to available information, the Sino-Myanmar commission on this project resumed its work in January this year. It is characteristic in this regard that US President Joe Biden, and in parallel with him the prime ministers of Great Britain and Canada, recently announced the renewal of sanctions against Myanmar.

If we take a closer look at the canal project, the routes through the Kra will cut the route between the Pacific and Indian oceans by at least half and thereby radically change the geography of transcontinental cargo flows to the Asia-Pacific region.

The rapid growth of international freight traffic through the straits and seas of Southeast Asia requires the creation of at least two parallel routes across the mentioned isthmus.

The traditional one - a bypass sea route through the Indonesian, Malaysian straits and Singapore - is already struggling to cope with the growing cargo flow. Meanwhile, the aggregate investment cost of both channel options remains quite significant.

At the same time, the Myanmar option, unlike the Thai one, is still slightly cheaper - respectively, about $ 17,5 billion against $ 18-18,5 billion, according to the estimates of ASEAN and APEC experts. The capacity of these channels is projected at 31-35 thousand ships per year.

There is also a Malaysian canal project - near the Thai border in North Malaysia. But this option is one third longer and almost as much more expensive in terms of construction costs in comparison with the mentioned options.

Here is the view of Pakdi Tanapura, executive director of the economic section of the Thailand-China Association for Culture and Economics:

“The canals across the Kra Isthmus will shorten the sea route from the APR, including from Southeast Asia to Europe and Africa, instead of passing through the Malacca and neighboring straits by 1100-1300 km; will save for carriers 48-64 hours on transportation of goods ”.

“This is followed by the related benefits of such projects: for example, the reduction of fuel and lubricant consumption by ships. As well as a 25 percent drop in interoceanic freight rates in the area. "
In the meantime, the rivalry between Yangon and Bangkok over these projects is becoming more intense. It comes to the point that the authorities of Myanmar periodically support the Thai Maoist-Stalinist Communist Party.

It is well known that its guerrilla groups are actively operating not far from a possible Thai route (Red guerrillas in the land of the White Elephant).

Under the tutelage of Beijing

The Thai option is about 160 km in the southern, widest part of the isthmus (near the Thai-Malaysian border) towards the Gulf of Thailand. This pipeline includes the construction of a parallel oil pipeline.

And the Myanmar project is the shortest route between the Indian and Pacific Oceans: no more than 70 km in the north of the isthmus and without a parallel oil pipeline. However, the section of the land border of Myanmar with Thailand does not directly enter the waters of Southeast Asia in the Gulf of Thailand. 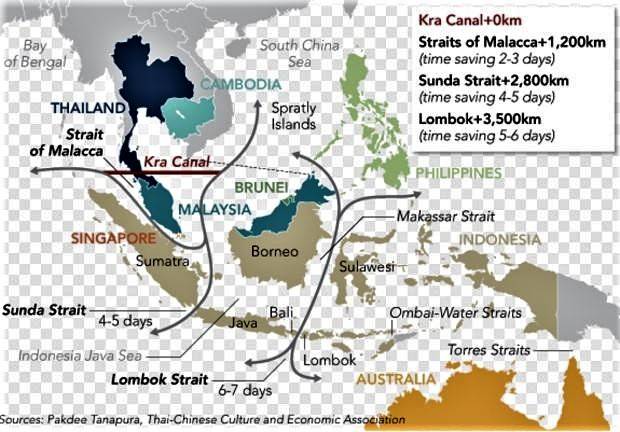 Therefore, an approximately 20 km extension of this route will be required in the neighboring region of Thailand. But it is the Myanmar project that will allow the ships along the shortest route and at lower costs than the purely Thai option, to ply in the waters of South China / Hong Kong-Vietnam-Indian Ocean.

Such a project was developed back in the former Burma, which has been called Myanmar since 1989. Moreover, it was developed with the help of the USSR in the late 1950s. But the project was not implemented due to the deterioration of political relations between the countries.

Almost immediately, by the mid-60s, Beijing took over the political and economic "tutelage" over Myanmar of the last century. With the simultaneous support of the local guerrilla communist party, similar to the Thai one. In order, if necessary, to achieve greater "obedience" to the Burmese military authorities.

Meanwhile, the situation in the region is such that Beijing has to maneuver between Myanmar and Thailand. Both the political and economic influence of the PRC in Myanmar is more significant than in Thailand, therefore, as reported by the media in Thailand and Taiwan in the mid-2010s, the Chinese side chose the option through Myanmar.

Beijing is periodically persuading Bangkok to agree to a 20-kilometer stretch in the Thai part of the Krai included in that option. At the same time, according to Taiwanese expert Leung Wei,

“The growing trade flow between the Asia-Pacific region and the countries of the Indian Ocean basin requires the creation of two parallel routes on the Kra isthmus. Since its geographical narrowing in the Thai and especially in the Myanmar sectors does not allow the creation of one wide waterway. "
The channels themselves on the Kra, the expert notes,

"In their geographic, hydro and other technical conditions will be similar to the Panama Canal."

But the similarity here in all respects - not only hydraulic engineering? ..

Ctrl Enter
Noticed oshЫbku Highlight text and press. Ctrl + Enter
We are
A great interview with Sergey Lavrov: about Ukraine, Obama and IranWhat you didn't want to know about England
Military Reviewin Yandex News
Military Reviewin Google News
32 comments
Information
Dear reader, to leave comments on the publication, you must sign in.