The war in Syria flares up again 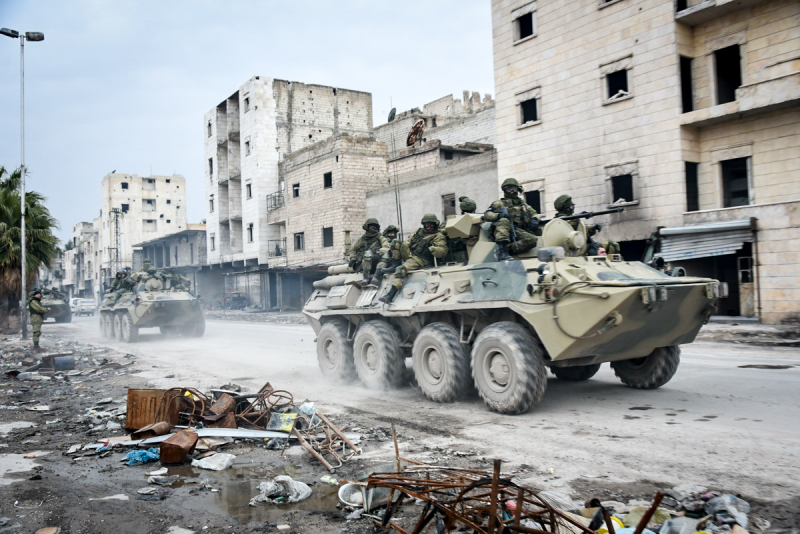 Agree, the calm in Syria looks somehow strange. Against the backdrop of a mutual aggravation of rhetoric around foreign policy issues, Russia-US, Russia-NATO relations, and even personal contradictions between heads of government and senior officials of countries.

It is strange already because it is in Syria that Russians and Americans, together with allies from the alliance, are waging a real fight against terrorism, defending democracy, a legally elected government, and so on.

The media (regardless of the country) report on military patrols that ply the routes and ensure peace in some areas, on humanitarian convoys, on medical assistance to the Syrians ... It seems that we are in the informational USSR of the early 80s.

Once upon a time, newspapers reported daily about Soviet soldiers helping to build orphanages, roads, hospitals, etc. And at this time, active hostilities had already begun and the first 200s had already been sent to the USSR.

Meanwhile, according to reports from our military, the activity of illegal armed formations has sharply increased. Mining roads, killing civilians, attacks on the posts of the Syrian army and other attributes of an active guerrilla war are now common again.

The militants began to act especially actively in the provinces of Homs and Deir ez-Zor. It is there that we see the most insolent and undisguised actions of terrorists. At the same time (with the exception of cover groups) the militants disappear somewhere at the slightest danger. In most cases, the losses of gangs are calculated by the piece.

Left for Africa, but didn't make it

After the successes of the Syrian army in 2019 and the capture of the "capital" of IS (banned in the Russian Federation) Raqqa, the pseudo-state has become quiet.

It was not clear how the Turks, Americans and Europeans would behave. But most importantly, the future plans of Syria and Russia were not clear. Either the continuation of hostilities in the already almost cleared areas, or pick out terrorists in Idlib.

If we consider the map of hostilities, then the decision to transfer the main attack to Idldib was obvious. Moreover, the American military command guaranteed the fulfillment of the tasks of the fight against terrorism in the controlled territories, and the militants controlled by Turkey did indeed intensify.

However, further events for the militants became a gift. The province of Homs has become an excellent refuge for terrorists. As soon as you change the name of the organization, and not really caring about ideology and other "little things", as you move into the category of moderate opposition. And it seems like they are not the enemies of Damascus, but people with a different political position.

The Al-Tanf military base, located northwest of the US border crossing of the same name in the province of Homs, has become a permanent place of work for American intelligence, British secret intelligence service (SIS / MI-6), and Jordanian intelligence. In addition, instructors from special forces for guerrilla warfare, sniper and sabotage work work on this base on a permanent basis.

Information about the militant camp near the American base has been confirmed many times.

Syrian intelligence knows enough about the locations. But the Syrians are afraid to carry out operations to neutralize the militants in this area. Direct confrontation with terrorists is fraught with a meeting with American troops. And, therefore, the beginning of the DB is already against the United States.

However, even here the Syrians have problems. Let me remind you that the Al-Tanf base is the brainchild of American intelligence. When it was opened in the spring of 2017, the task was to protect this base from attacks from all directions. Today a rather complex air defense system is organized there.

The sky and the nearest approaches to the base are controlled by American UAVs. All dangerous areas are protected not only by checkpoints, but also by positions of heavy equipment, including HIMARS multiple launch rocket systems. It is quite difficult to open such a defense system without the participation of heavy equipment and missile strikes.

Now, it seems to me, it becomes clear why the "African tour" of many militants ended so quickly in the province of Homs. It remains to be seen why this is happening.

Who needs this world

Besides the Syrian people, of course. And that's not all.

The current situation is beneficial to the Americans. It is partly beneficial to the Turks. And the militants. Let's leave the issue of Turkish interests aside. This is a big and serious conversation. But about Americans and others like them it is worth recalling.

Here it is necessary to recall the former American President Donald Trump. More precisely, his statement from November 2019 in a special speech on the situation in northern Syria:

“We have taken the oil under protection, so a small American contingent will remain in the region where the oil is located. We will protect it and decide what to do with it in the future. "
Clearly and without any politeness.

The oil is ours, and we will dispose of it of our own free will. War is just a way of doing business, nothing more.

However, Trump also made another important statement there even today:

“We will come up with something with the Kurds so that they have some money, some kind of inflow of funds.

Maybe we can get one of our big oil companies to start working there and do it properly.

But they will have an inflow of funds. And now it, in fact, is not.

There is a fight going on.

It's a small oil region, but everyone is fighting over what is there. "
The version of the desire of the United States to preserve instability in Syria, and therefore to retain control over hydrocarbon deposits, is also confirmed by the recent statement of the Russian ambassador Alexander Efimov:

"The American occupation not only impedes the development of Damascus's natural resources, but also prevents the restoration of the sovereignty of the legitimate authorities throughout Syrian territory, in particular, pandering to separatist aspirations."
“I believe that it is too early to talk about the plans of the American administration regarding Syria.

Another thing is that one should hardly expect, in principle, a revision of the US line in Syrian affairs.

The pressure on Damascus is likely to continue, and the American troops on Syrian soil in this sense are one of Washington's main instruments, as the Americans themselves have repeatedly spoken about. "

The Russian military has more than once declared about the activation of terrorists and the strengthening of their support from the Americans. Especially in the already mentioned provinces of Homs and Deir ez-Zor. Today, the Russian Aerospace Forces are again actively helping the Syrian army during operations against militants.

The role of MTR units has grown again. Serious intelligence is needed to conduct successful operations against militants. It is necessary to identify not only the accumulation of terrorists, but also the location of the bases of bandit formations, the infrastructure of terrorists, caches and depots with weapons and ammunition.

Only high-class specialists can do this.

Here is one of the latest messages from the RF Ministry of Defense:

“In a desert area in the east of the province of Homs, a large cache was found used by ISIS militants (banned in the Russian Federation) to conduct terrorist activities in the provinces of Homs and Deir ez-Zor.

In the course of the operation, four militants were killed in two pickup trucks with heavy machine guns, who apparently performed the function of security. "
“The cache contained 36 assault rifles and light machine guns, seven large-caliber machine guns, a heavy-duty grenade launcher with 28 grenades, an ATGM installation, 87 mines and grenades, about 40 kilograms of explosives and over 22 thousand ammunition, including those produced by NATO countries.

The militants also hid about 45 kilograms of medicines, some of which are also from abroad, and almost half a ton of food. ”
Also, according to our intelligence, so-called "white helmets" have appeared in the provinces.

So, you should know expect a provocation about the next

"Application of chemical weapons».
From this we can conclude that the war in Syria is far from over.

Terrorism in the Middle East has not been eradicated, but only suffered heavy losses.

And now, with the help of our "partners", it is being reborn.

The deterioration of our relations with the US and NATO contributes to this.

Ctrl Enter
Noticed oshЫbku Highlight text and press. Ctrl + Enter
We are
Situational analysis of the death of the MH17 flight (Malaysian Boeing 777), made on the basis of engineering analysis from 15.08.2014Syria: Americans scare themselves, and Asma Asad buys chairs
Military Reviewin Yandex News
Military Reviewin Google News
91 comment
Information
Dear reader, to leave comments on the publication, you must sign in.