Pistols for clutches, shoes and ... a vest pocket!

You will never be deceived
He will never betray you!
Adam Lindsay Gordon
Weapon and firms. In 2013, Voennoye Obozreniye already had material about the Derringer pistol (Ageless derringer). But since a lot of time has passed since that moment, and a lot of new interesting information and photographs have appeared, I thought that it makes sense to return to this topic. Moreover, we are now running a corresponding series, and I would not like to miss this unusual type of hand firearms within its framework, which, by the way, has a very old and interesting history.

A scene from the movie Parisian Mysteries of 1962. The lady is holding a typical "clutch pistol"
To begin with, the appearance of Derringer-type pistols was due to two circumstances at once: global cooling and the fashion that arose from it. The so-called "little ice age" emerged, which lasted from 1312 to 1791. It is this climatic factor that is believed to have caused both the Hundred Years War and the Great French Revolution, because when people have nothing to eat, they immediately become cocky. However, severe frosts took place both in 1812 and in 1813, so the cold did not release Europe immediately. And since at that time people were very cold hands, there was a fashion to hide them in fur muffs - and beautiful, and rich, and warm. Moreover, both women and men wore them.

And then it turned out that it is also convenient to hide a weapon in the clutch - a small-sized pistol for self-defense. However, it was necessary that such pistols appeared, and ... they appeared, and at first even wheeled! This is how fashion influenced the design of the weapon. But that was not all! 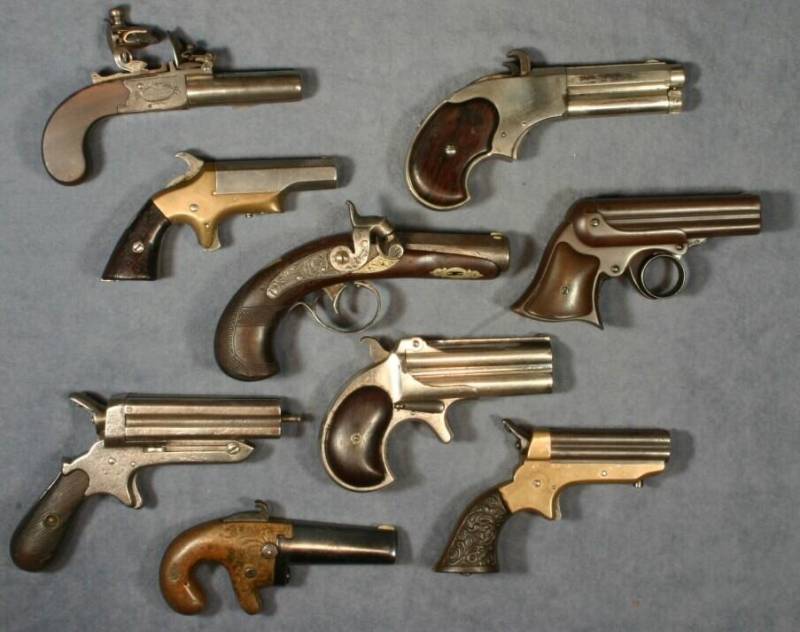 Here they are - "derringers" of different times and different systems. We will tell you more about some of them ...
In the XNUMXth century, people more and more often had to travel, for example, in the same England, and not only men, but also women. However, this was an unsafe business, since the police did not yet exist at that time, but there were an abundance of robbers on the roads!

“Your money, your life or your big fat wife” - shouted the robbers traveling in carriages, and they had to either give or defend themselves! Therefore, people were going on the road as if they were going to fight. The gentleman, riding somewhere on horseback, took a pair of saddle pistols (preferably double-barreled) and, of course, a sword, which theoretically could protect him from five. Pockets for two pistols began to be placed on the carriage doors, and at the end of the XNUMXth century there were even four-barreled flintlock pistols “for the road”, and at the beginning of the XNUMXth century even six-barreled ones, which had one flintlock, but, accordingly, four or six powder shelves with sliding covers. Four of these pistols could theoretically protect against a whole gang, but some of them also took trombolone with them on the road, moreover, equipped with "wolf", "chopped buckshot", chopped from a lead rod, and even often with a bayonet. By the way, they began to equip pistols with a bayonet, but we have already talked about this here. They were also known as Shoe Pistols, Toby Pistols, Cuff Pistols, Pocket Pistols, and Clutch Pistols because they could be hidden in a lady's muff.

And so it turned out that when the capsule lock appeared, an American from Philadelphia Henry Deringer (1786-1868) in 1825 decided to contribute to this "pocket-clutch" variety and put on the market a small-sized single-shot pistol, of which about 15 000. All of them were single-barreled and, as a rule, .41 (10,5-mm) caliber, with a rifled barrel and a walnut grip. Barrel lengths ranged from 1,5 to 6 inches (38 to 152 mm) and were finished in a copper-nickel alloy - nickel silver, known as "German silver". The heavy barrel and comfortable grip made it possible to make an accurate shot, albeit at close range, and the large caliber provided sufficient destructive power. In addition, such a bullet usually carried dirt and debris into the wound, which in the absence of antibiotics would usually lead to death. 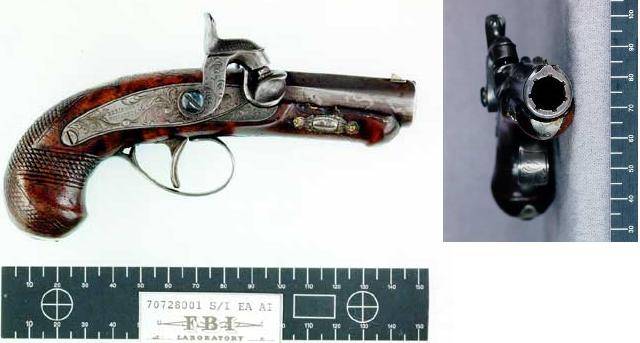 "Philadelphia Deringer" - Booth's pistol was unusual in that the rifling twisted in it counterclockwise, and not clockwise as usual. It was made personally by Henry Deringer. Photo by the Library of Congress
They were produced from 1852 to 1868, were in demand, and it is natural that everyone who was not lazy began to copy them. And in order to get around the patent, which at the beginning did not even exist - they say, it's just an ordinary primer pistol, only less than others - someone added an extra letter "r" to the name (at least that's the legend!), Well, so "business "And off we go. The assassination of President Lincoln added to the popularity of this pistol. After all, the actor Booth shot him with just such a gun. "Philadelphia Deringer" - that's what they called him then! 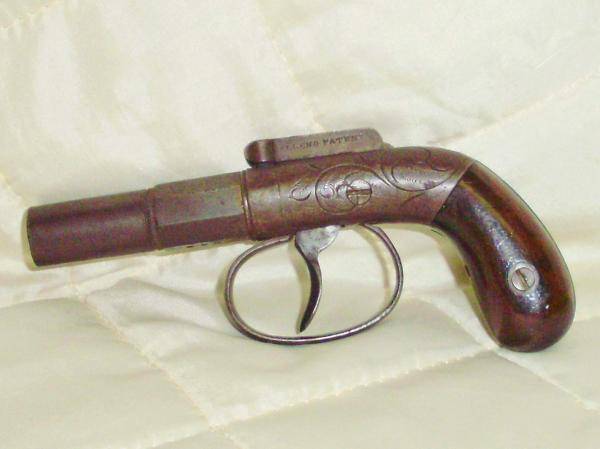 Pod pistol for Allen coupling with screw-in barrel
When loading this pistol, if it was not fired from it for a long time, it was recommended to “shoot” only with primers a couple of times in order to dry out any residual moisture that might be in the hose or at the base of the barrel, and thereby prevent subsequent misfire. Then the trigger was put on a half cocking, 15 to 25 grains (1 to 2 g) of black powder were poured into the barrel and a bullet wrapped in cloth was pushed with a ramrod. It was necessary to be careful not to leave an air gap between the bullet and the powder, since in this case the pistol could break. 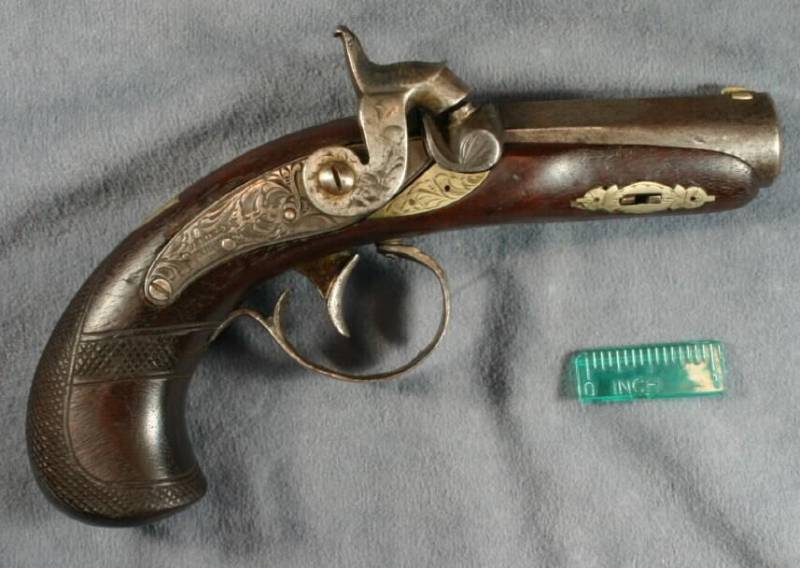 Classic capsule derringer
Then a new shock capsule was put on the brant tube, after which the pistol was loaded and ready to fire. Then, in order to fire the pistol, it was necessary to fully cock the trigger, aim and pull the trigger. In the event of a misfire, one could try to cock the hammer a second time and fire again, or ... grab onto the second pistol. Nobody expected special accuracy from such pistols, therefore many of them did not have front sight. And why should she, if these guns were often used by card sharpers at the poker tables? 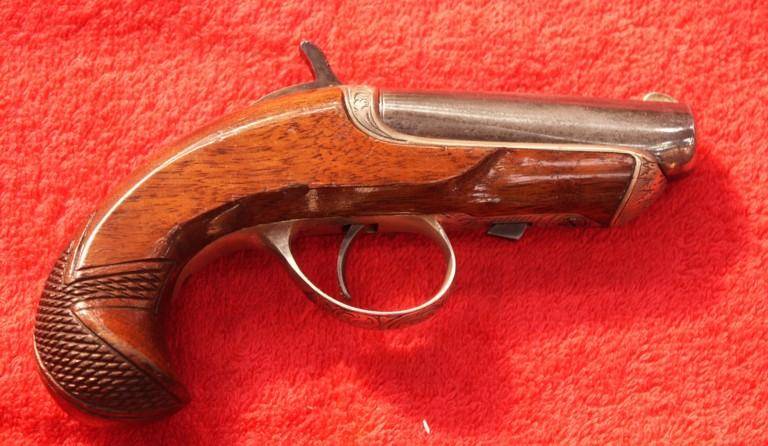 Also capsule, 1866, but very unusual. Some Williamson's designs. Outwardly, this was not particularly evident. Unless you could see the cap for the capsule ... 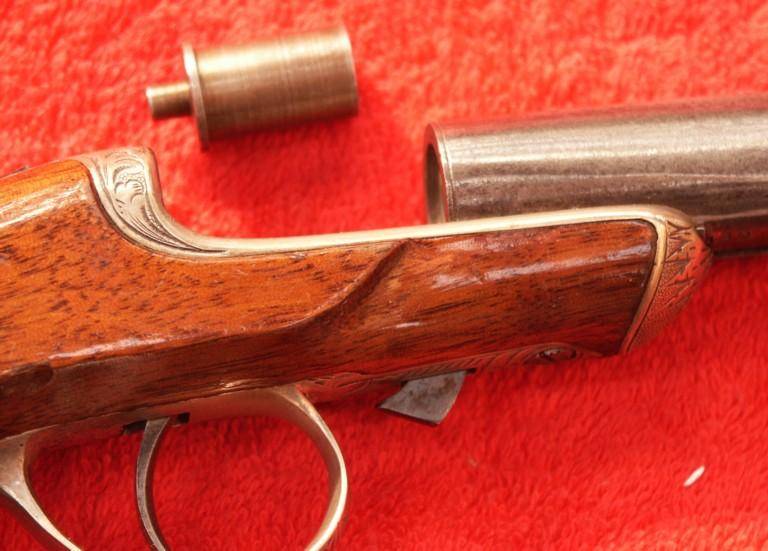 And it was not visible because the tube for the primer was on the liner cylinder, which was inserted into the barrel. It was in it that the gunpowder was poured and the bullet was inserted! 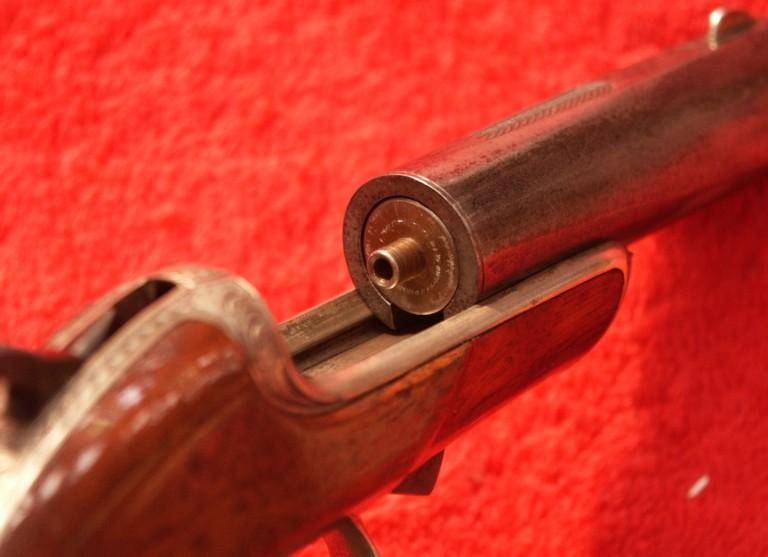 Barrel with liner inserted into it
Professional players and those who regularly carried this pistol with them fired and reloaded it daily to reduce the chance of misfire. Production records of the Derringer show that these pistols were almost always sold in pairs. At the same time, the typical price ranged from $ 15 to $ 25 per pair, and the models with silver inlay and engraving, of course, were more expensive.

This is how it looked: a man was accused of cheating, and in response he snatched a small but deadly pistol. Still from the movie "Lemonade Joe"
Originally popular with Southern Army officers, the Derringer also gained popularity among the civilian population, who wanted a small and easily concealed pistol for self-defense. In the Wild West, the Derringers were called "pocket pistols," "sleeve pistols," and "boot pistols." 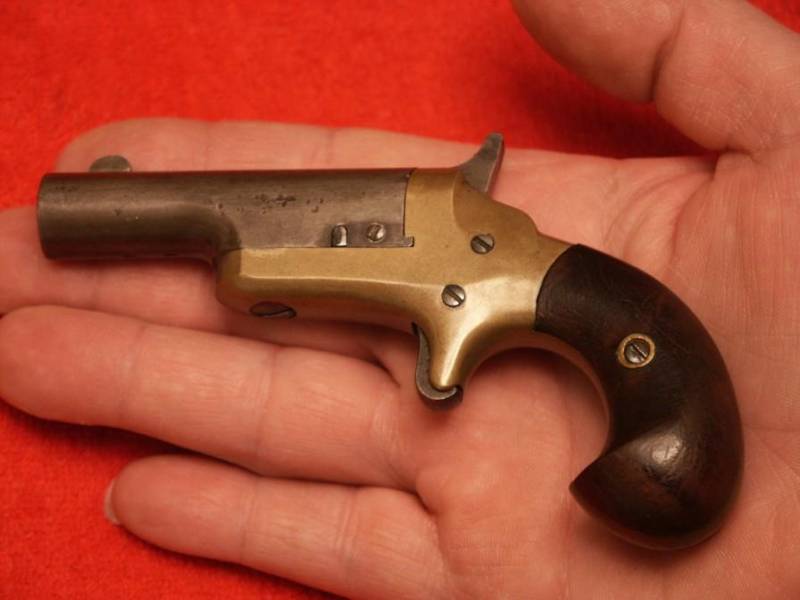 Colt Derringer. Produced from 1872 to 1912
The emergence of cartridges, first "side fire", and then "central battle" caused the rapid growth of models of "derringer", which began to produce even the most famous and renowned companies. So, the simplest, cheapest single-shot "derringer" began to be produced by the "Colt" company. A very popular, elegant and, moreover, a double-barreled and double-shot pistol was produced by Remington, but Smith and Wesson, which produced a five-shot Derringer Raider with an underbarrel magazine, outdid everyone! 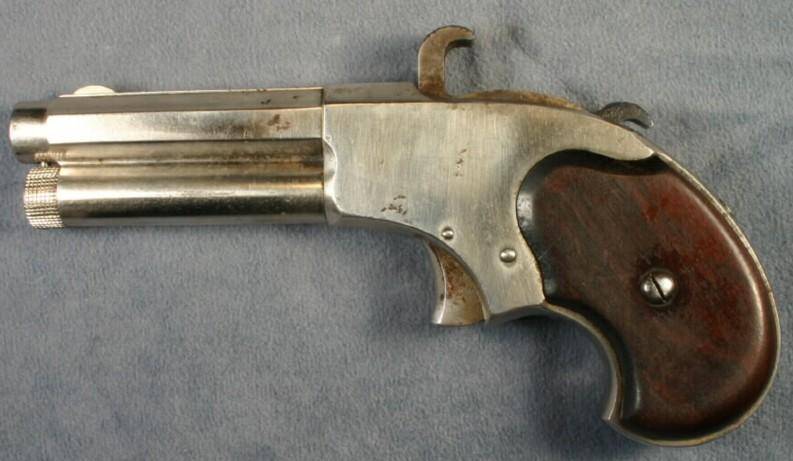 The 8-mm pistol "Ryder" of the "Remington" company had an under-barrel magazine for five rounds, and the supply of cartridges was carried out by pressing the lever located next to the trigger
From 1866 alone until the end of their production in 1935, the Remington Arms Company produced more than 150 double-barreled derringers chambered for the .000 Model 41 rimfire cartridge. At the same time, their "derringer" retained its compact size, although due to the short barrels, the .95 Short bullet had a speed of only 41 m / s, which is about half the speed of the modern .130 ACP. 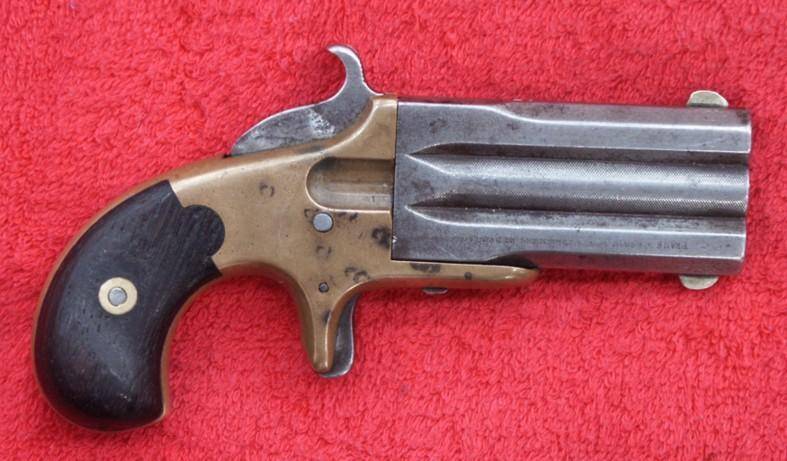 Frank Wesson's double-barreled derringer. In the middle, not the trunk, but the axle!
Nevertheless, it was the “Model 95” that gained such wide popularity that it completely overshadowed all other designs and became synonymous with the word “derringer”. The classic design of this pistol has remained popular even after the introduction of more compact and powerful smokeless powder cartridges. Interestingly, Remington Derringers are still manufactured by American Derringer, Bond Arms and Cobra Arms, each of which produces pistols in a variety of calibers ranging from .22 Long Rifle to .45 Long Colt and .410 ... Modern models are used by reenactors of cowboy shooting, as well as concealed carry weapons. 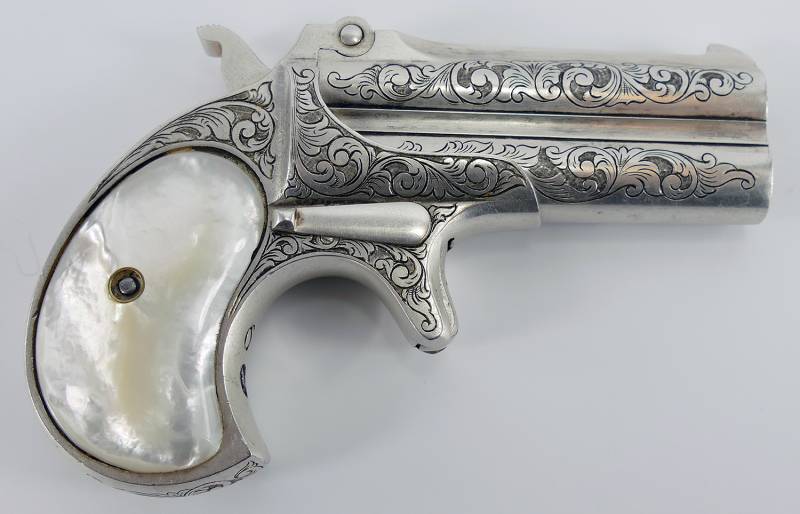 Silver-plated pistol with mother-of-pearl inlaid grip
One of the most common types of derringers was also the Sharps pistol. This is a pistol with four barrels, which slide forward for loading and a single, but rotating striker. Known "sharps" chambered for .22, .30 and .32 caliber cartridges. It was first patented in 1849 and began production in 1859 when the company was able to obtain a patent for a practical derringer design. The first models had a brass frame and fired .22 "side fire" rounds. The second model was made for the same .30 caliber cartridge. The third model "Derringer" (.32) had an iron frame, and the mechanism for shifting forward on it was moved from under the frame to its left side. The Derringer of the fourth model also had a .32 caliber chambered for "side fire" with a new "bird's head" grip and slightly shorter barrels, otherwise it was almost identical to the third model. 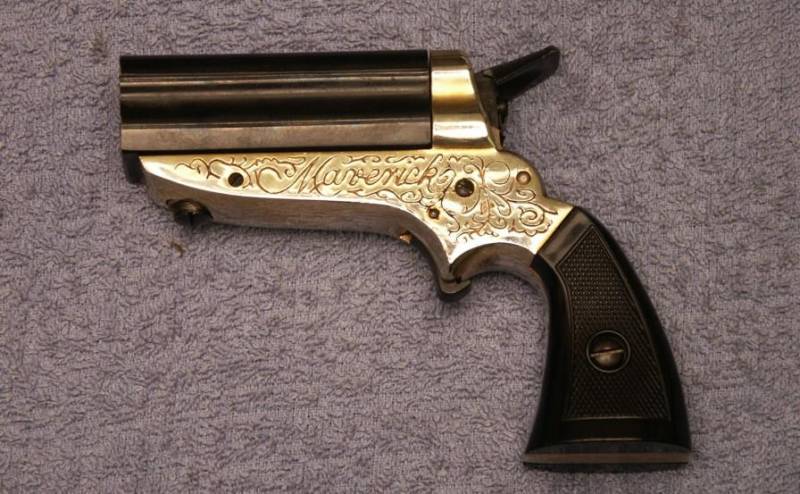 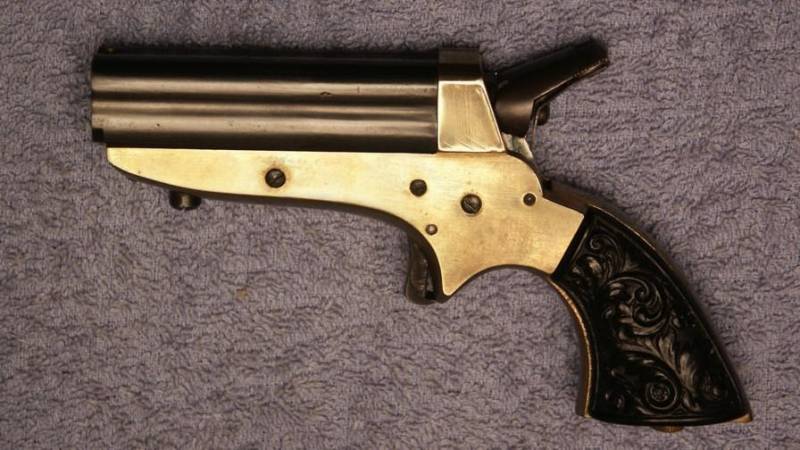 A modern copy of the "derringer" of the Sharps system from the company "Uberti"
And then there was Daniel Moore's Derringer, who patented the .38 Rimfire derringer single-shot metal cartridge in 1861. These pistols had barrels that turned sideways on the frame for loading, which provided access to their breech. Moore produced them until 1865, when he sold them to the National Arms Company, which made .41 single-shot derringers until 1870, when it was acquired by Colt's Patent Firearms Manufacturing Company. Colt continued to manufacture these pistols to break into the metal gun market, but also introduced its own three single-shot Colt Derringers chambered for .41. The last model was produced only in 1912, and in the 1950s a number of these pistols were produced specifically for filming Westerns under the name "Fourth Colt Derringer Model". 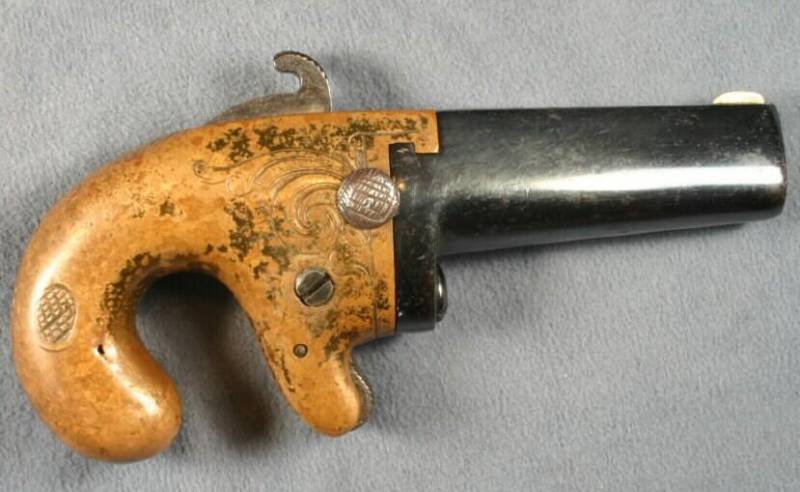 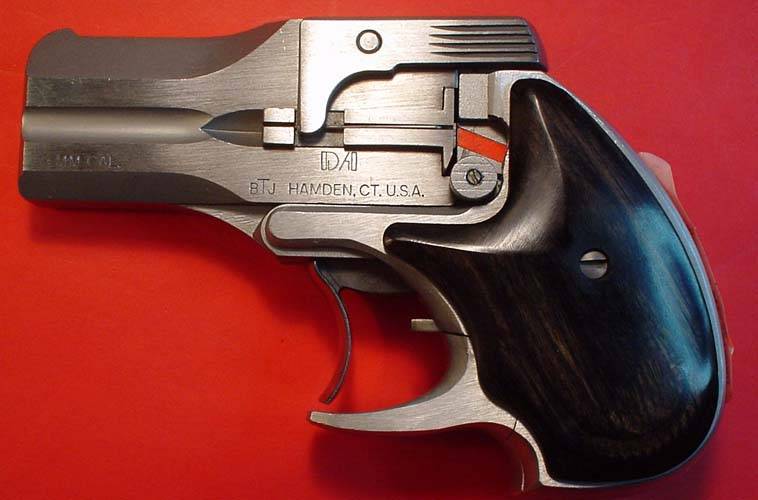 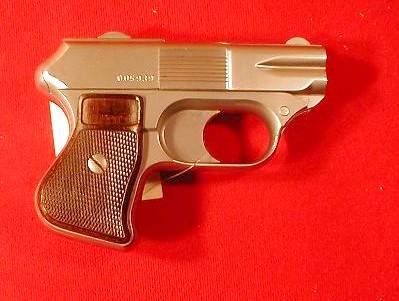 COP 357 manufactured by COP. Inc., Torrance, California
The COP 357 is a .357 Magnum double-action four-barrel pistol with 2x2 barrels. It was first introduced in 1984 and is still in production today. 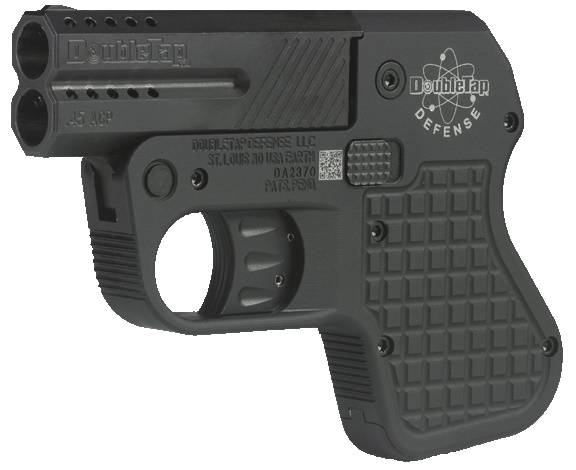 DoubleTap's double-barreled derringers were introduced in 2012 and are still in production today in many different designs. 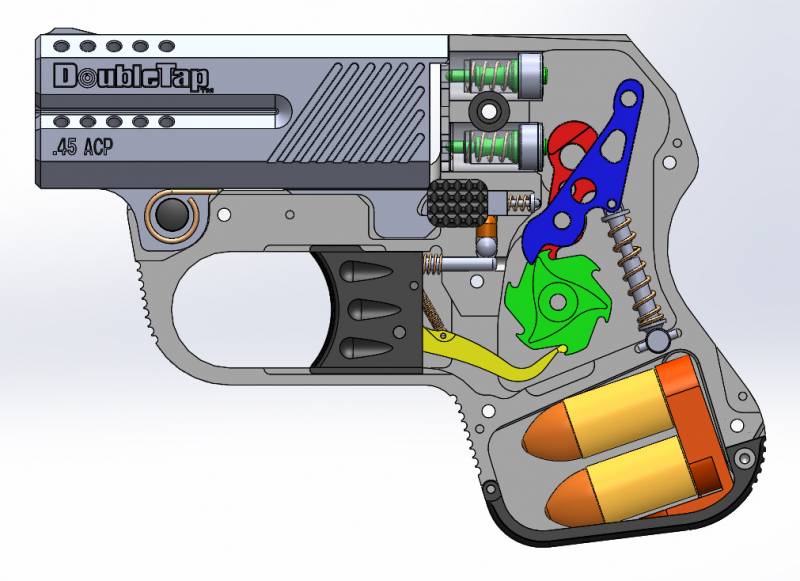 Diagram of the device of this pistol. The strikers of the barrels are fired in turn (photo from the website of the DoubleTap company)
These pistols have stainless steel barrels and aluminum or titanium alloy frames. And in the handle there are two additional cartridges. Moreover, its creators said that they saw this idea in the FP-45 "Liberator" pistol of the Second World War, created by the Americans specifically for European partisans! And, in fact, it was also a "derringer", only very crude, primitive and ... cheap. 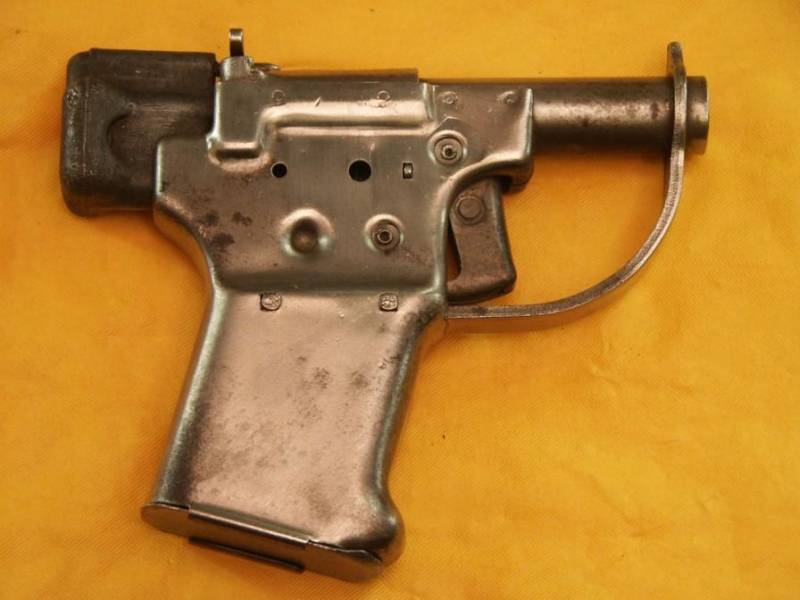 Ctrl Enter
Noticed oshЫbku Highlight text and press. Ctrl + Enter
We are
Submarine GunsWhat should be a modern sniper (part of 1)
Military Reviewin Yandex News
Military Reviewin Google News
158 comments
Information
Dear reader, to leave comments on the publication, you must sign in.