Who killed the Russian Empire 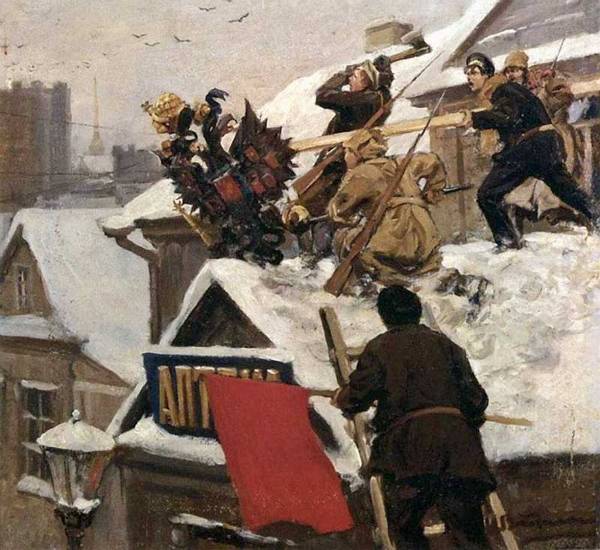 "Down with the Eagle!" Painting by I.A. Vladimirova

How did the Russian Troubles of 1917 begin?

From the riots in the capital of the empire - Petrograd (the city received its Slavic name during the patriotic upsurge of the World War). The reason was the food issue. For several days, the supply of cheap black bread, the basic food of the bulk of the common people, was disrupted.

It is possible that this was a planned sabotage, like the deficit in Moscow during the collapse of the USSR. When meat and fish were thrown into ravines, they destroyed, and the counters were empty. So in the Russian Empire, the problem of food security did not arise. Bread and provisions, in general, were in abundance in Russia.

The issue was delivery, communication disruptions. In addition, in speculation by interested parties. That is, targeted arrests and repressions could bring order in this area.

On February 23, 1917, a strike began at the enterprises of Petrograd. Some of the workers took to the streets. And so it began.

The capital rushed. The streets were filled with crowds that poured from the outskirts to the center. Students and female students joined the workers. At first, people demanded bread. Then they began to shout “Down with!”, Demanding a change of power. On February 24, the strike became general.

If there were decisive commanders in Petrograd, such as Napoleon, or General Ming (killed in 1906) and Rennenkampf, who had the appropriate powers, there would be no problem at all. Several combat military units would instantly disperse the crowds of rioters. Saving the empire with little blood.

However, the police department and military forces in the capital were disorganized, deprived of decisive and proactive leaders. As a result, all the actions of the "siloviks", among whom there were obviously "rats", only provoked a further uprising.

At the same time, Tsar Nicholas II was at Headquarters in Mogilev, not representing the scale of the threat. The rate was inactive, since the top generals were a participant in the game directed against the monarch.

And the crowd in the capital got off all the brakes. The police were pelted with stones, pieces of ice, boards, and beaten. The policemen began to kill. Cossacks, directed to help the police, did not act. In some places, they even began to support the crowd.

The crowd smashed shops and wine cellars, brought food and drink to the soldiers and Cossacks. In the evening, police stations burst into flames. The most important archives were destroyed under the guise, and the law enforcement system was soon completely destroyed.

This is how the great criminal revolution began, which accompanies any troubles, and became an important part of the Russian Troubles of 1917-1921.

Troops are being taken out into the streets. But these were rear, spare parts, not fired on at the front. The soldiers did not want to go to the front line, they easily succumbed to revolutionary propaganda. The provocateurs began to shoot at the soldiers, they answered, blood was shed. Chaos and blood shocked the untrained recruits. And then revolutionary agitators infiltrated the barracks. They "processed" some of the soldiers, others adopted "neutrality."

On February 27, the mutiny was raised by the units of the Pavlovsky and Volynsky regiments, and other units followed them. Thousands of soldiers poured into the streets since weapons in hand. The few officers who tried to stop the crowd were torn apart. The soldiers united with the workers and smashed the arsenals. The crowd also smashed the prisons. A "catalyst" - experienced criminals and political prisoners, professional revolutionaries - got into the seething masses.

Armed people seized cars, ran with red flags through the streets. Policemen and gendarmes were killed. The rioters flooded the courthouses, smashed the headquarters of the Security Department (gendarmerie) and the Main Military Intelligence.

Priceless archives have been destroyed. On the same day, the tsar issues a decree on the dissolution of the State Duma. Excited crowds immediately flooded to her defense. The elite of Russia demanded that the sovereign abdicate the throne. Old Russia was blown up, destroyed in a few days!

Moreover, the role of the Bolshevik communists in these events is close to zero. During the First World War they took the position of "defeatism" and were defeated as a party. All leaders and activists were in prisons, in exile, or fled abroad. The influence of the Bolsheviks on the people, the capital was practically zero. Lenin, in general, believed that now the revolution in Russia would take place in the very distant future.

In democratic Russia of the 1990s, a myth was created that the Bolsheviks, the lumpen proletariat and criminals destroyed “old Russia” with its elite - the nobility and officers, intellectuals and merchants, clergy and wealthy peasants. They walked with fire and sword through the flourishing and happy Russia, plundering, raping and killing. They turned the country into a spiritual and intellectual "desert", drove the people into communist slavery. The country was in slavery until 1991.

And then there was the noble White Army, which tragically fought the "red infection". They fought "For Faith, Tsar and Fatherland!" lieutenants Golitsyns and cornets Obolensky. Cossacks and peasants also fiercely fought against the red commissars.

There is also a private version of this version, widespread in the ranks of Russian nationalists, who are not familiar with materiel. They say that "Holy Russia" was attacked by Jewish commissars who led the Bolsheviks and other socialist parties and movements. They enjoyed the full support of the "Financial International" and world Zionism. It was they who destroyed “Holy Russia”, massacred millions of Russian people.

The problem is that the real история Russian turmoil does not correspond to these myths. So, the Jews were in other parties, as well as the Freemasons. And the Freemasons, among whom were many influential representatives of the Russian elite, really played an outstanding role in February.

At the same time, our "allies" in the Entente - France, England and the United States - also played an important role, whose diplomats helped to destroy the autocracy and empire with might and main.

The officers were split into several parts.

Some of them became White Guards volunteers, fighting for the interests of Russian and world capital, playing the role of "cannon fodder".

The latter began to help create a new Russian army - the Red, and with it the ruined statehood.

Still others - joined the ranks of various national armies and formations, participating in the dismemberment of Russia.

The fourth were completely demoralized, fled abroad, as they could retained neutrality, or even became bandits.

The Cossacks were divided into red and white.

The peasants, in general, most often fought for themselves. No power, neither red, nor white, nor nationalist (for example, the Ukrainian Directory) was recognized.

"Red partisans" fiercely fought with the White Guards, smashed their rear. And, as soon as the Reds came to their place, they raised an uprising against the Bolsheviks. And then there were the "green", rebels of all stripes, just gangs whose motive was robbery.

The white army did not fight for any king.

On the contrary, its backbone were generals and politicians who took an active part in the abdication of Nicholas II, the fall of the autocracy and the empire.

Revolutionary Februaryists, Socialists, Social Democrats and Western Liberals. Monarchists in the White movement were not honored. They had to hide their views. The monarchist circles were smashed by the white counterintelligence.

That is, both the White Army and the Red Army were two revolutionary armies - February (White) and October (Red). Plus the nationalist revolutionaries, separatists, who fielded hundreds of thousands of fighters. More than white.

And the elections to the Constituent Assembly in 1918 brought the socialist parties (Bolsheviks, Mensheviks, Socialist-Revolutionaries, People's Socialists) 80% of the vote. Therefore, the people no longer gave a damn about tsarism, capitalism, landowners, merchants and priests. The people voted for socialism, the question was which option would win.

The key factor that undermined the autocracy was the world war. Therefore, our "allies" - England and France, with all their might and involved us in the war. Without a big war, the autocracy and the empire had a chance to gain time and carry out the necessary modernization of the country and society (which was eventually carried out by the Bolsheviks, but already in much worse starting conditions).

And the West, which was trapped in the next stage of the crisis of capitalism, needed "fresh blood." Other people's resources, accumulated wealth, gold, "brains". Territories that can be colonized, simply robbed, made your sales market. Therefore, the West relied on the death and destruction of the Russian Empire in the world war.

Entering the war, as the Japanese campaign (First Russian Revolution) has already clearly shown, was mortally dangerous for the Russian Empire. The best people of Russia understood this.

In particular, the former Minister of Internal Affairs Pyotr Durnovo (Durnovo's Note dated February 1914), Stolypin and Rasputin (therefore they were killed). The war was from a series of unnecessary and incomprehensible to the Russian people.

At that time we had nothing to share with Germany. On the contrary, a strategic alliance with Germany was asking for itself. However, all attempts to create such an alliance were thwarted (in particular, Witte worked). The war with the Germans (in fact, for the Germans) was suicidal, senseless and insane. In the interests of France, Britain and the United States, who dream of the collapse of their main competitors - the German and Russian empires.

Russians were once again used as "cannon fodder". The Russian army, washing with blood, saved France in 1914 and 1916. She did not allow the German corps to take Paris. We defeated the Turkish army in the Caucasus and allowed the British to get into Iraq and Palestine.

At the same time, Russia became a "cash cow" for the Entente. Hundreds of tons of gold were used to buy weapons, ammunition and equipment. The West took the money, but either did not fulfill the orders, or did it very badly, in part. Russia was simply "thrown".

The West and Japan still owe this gold to us, it is just that it is not voiced.

At the same time, the West "thanked" us for our help.

England was not going to give us Constantinople and the Bosphorus, was preparing plans for the revolution and the collapse of Russia. Western diplomats helped the Februaryist revolutionaries topple Nicholas II.

The Russian peasant did not want to fight for Galicia and some straits. They fought for credits from France, for the strategic interests of London and Paris.

At the same time, the war revealed all the contradictions of the fragmented, sick society of the Russian Empire.

The enemies of Russia drowned the Russian army in blood, its personnel core was destroyed. It was the cadre imperial army that stood in the way of the revolution, it pulled the country out of the turmoil of 1905–1907. Instead of the retired cadres, masses of representatives of the liberal intelligentsia became officers and non-commissioned officers. The soldiers (in the overwhelming majority - peasants) were accustomed to blood, violence and wanted peace and land. In doing so, they learned that the rifle gives rise to power.

And the highest generals, together with the grand dukes (relatives of the king), joined the ranks of the conspirators.

Under pressure from the high command, dignitaries and representatives of the State Duma, Nicholas II was forced to yield.

Russian sovereign with the words:

"Around treason, cowardice and deceit",
was forced to abdicate the throne.