Azerbaijani history: how Russian trains broke through the bandits 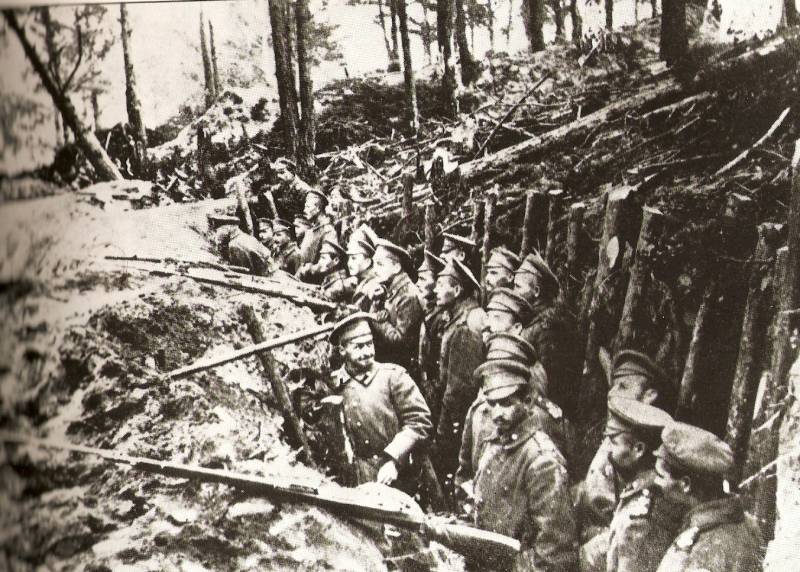 Russian soldiers on the Caucasian front in 1914. They will also become the main characters of the tragic events of 1918.

Transcaucasia has been a specific region since its inclusion in the Russian Empire. There was either no order, or it was specific, "compromise". Environment and cultural differences dictated their own terms. For example, in Tiflis the Mensheviks were extremely strong - so much so that during the First World War the imperial governor himself preferred to be friends with them and even consult with them. And it was not just anyone, but the Grand Duke Nikolai Nikolaevich, a close relative of the tsar and the former supreme commander in chief.

Moreover, this did not in the least reflect the situation in the Tiflis province as a whole. Outside the capital city, it was conditionally divided into the Armenian, Azerbaijani and Georgian zones, but only conditionally. In a number of places, the peoples were strongly mixed, while not as in a melting pot (with each other), but in separate villages. Which provided excellent grounds for future ethnic cleansing, destined to darken history this sunny southern region. 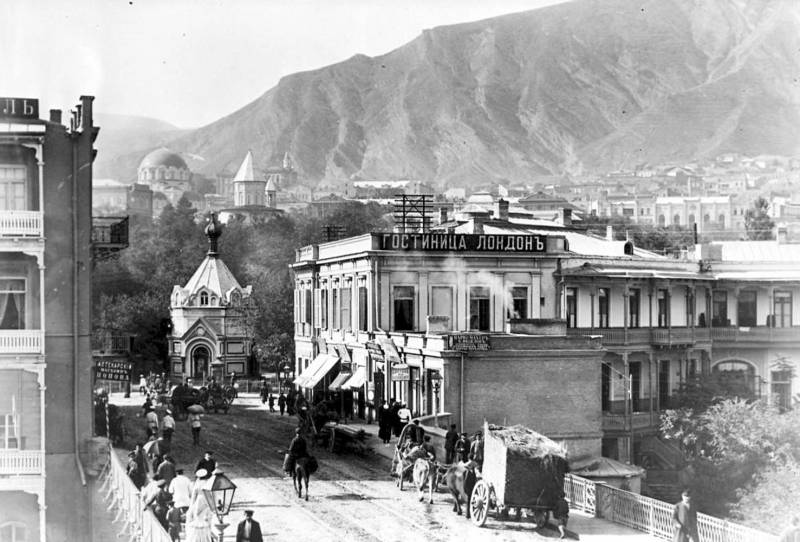 Tiflis in 1917
But even within the framework of some nationalities (for example, Azerbaijan), the national feelings that unite people were still not very strong. In many ways it was a land that resembled a patchwork quilt - not a land of peoples, but of individual tribes. Although the Georgians had a clear advantage - they had the strongest national intelligentsia among the local peoples in the Transcaucasus. And, of course, they tried to influence the tribes in their own interests. This could lead to anything, just not to a calm good-neighborliness.

When the Russian Empire collapsed, feelings and contradictions held inside immediately burst out. Feeling the self-liquidation of the supreme power, the peoples began to look at each other predatory. Everyone understood that only their own armed detachments can guarantee security. And in order to create them, it was necessary, first of all, weapon - there have always been enough hot people in the South.

And, in the meantime, the weapon itself went into the clutches of the Transcaucasian gangs. It was in the Russian military echelons returning home from the Turkish front. Discipline in the army was undermined by revolutionary events. By the beginning of 1918, all the fronts were to one degree or another collapsed, and the soldiers' masses moved home without permission. But, at least in regions such as the Caucasus, the soldiers still held together and were on their guard. The place was restless, and the times were incomprehensible.

Everybody wanted Russian weapons carried on the trains. First of all, he was passionately desired in Tiflis - but the Georgians had their own problems, and they were able to single out only one armored train and six dozen people. It was difficult to impress the military echelons with this, and they decided to resort to the help of the Azerbaijani tribes. Those Georgians were not very sympathetic, but, in principle, they were for any movement, except a hunger strike. And they responded to the call.

At the same time, the Georgians, led by a former imperial headquarters captain named Abkhazava, were not going to storm trains with human waves. They came up with what they thought was a cunning plan - to jam the trains into the gorge one at a time, taking comfortable positions around, and expropriate the weapons in parts.

But in the twenties (according to the new style) of January, something went wrong with them, and instead of one or two echelons they received as many as fourteen. Trains packed with armed soldiers stuck in traffic jams between the stations of Akstafa and Shamkhor. Quickly and effectively disarming the trains one by one, those who had gathered for the robbery did not have the skill, and the Russians were not fools. The situation was stalemate. 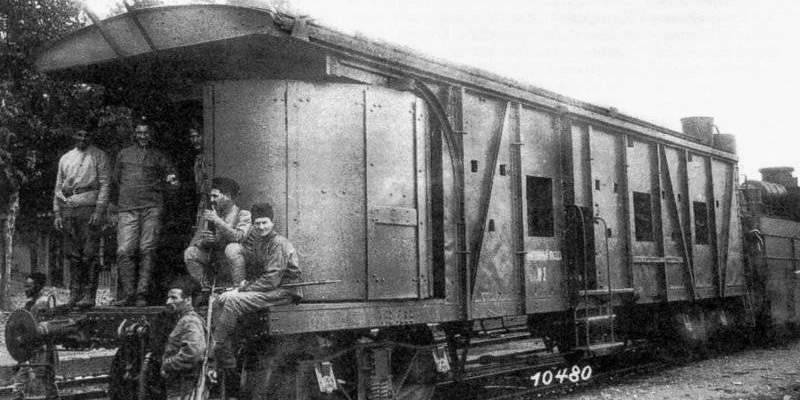 One of the Georgian armored trains
But Abkhazava was not discouraged - a horse detachment of the Wild Division (yes, the same one) - six hundred was already going to strengthen him. The group was headed by Prince Magalov, who, in an atmosphere of civil turmoil, did not experience any moral and ethical obstacles before robbing his own soldiers yesterday. However, even without Magalov, the forces of Abkhazava (or rather, conditionally controlled by Abkhazava) increased every hour. Gangs wishing to profit from the good of others and those eager to get weapons from local militias flocked to him - as you might guess, practically indistinguishable from each other.

Moreover, the Georgian commander already had a successful experience - he recently successfully disarmed a train. True, one. And, of course, the matter did not end with a simple withdrawal of weapons. Feeling the strength behind them, his people, following the weapons, took away the food with the transported horses - we, they say, need it more. Needless to say, appetite comes with eating - and now Abkhazava, watching the traffic jam from a dozen trains, saw not potential problems, but rich prey.

The last battle of an armored train

However, Abkhazava did not suffer from an overabundance of military valor - in the end, he wanted to take something valuable, and not die trying to do it. Therefore, in the beginning there were negotiations. The Georgian pretended to be a frightened man. He swore an oath not to disarm anyone, and in return asked to pass through the gorge with an armored train standing nearby, not in all echelons at once, but one at a time. Otherwise, the situation is nervous now, weapons are in the price, so you will take it, and rush all at once to capture this very armored train.

The trick turned out to be not particularly elegant - the Russians knew very well how things were done in the Transcaucasus, and flatly refused to split into separate echelons. The negotiations were at an impasse. And then the soldiers even took the Georgian negotiators hostage. But in the end, they released me after another round of the talking shop.

By the way, the Georgians almost without question let the train with Ukrainian soldiers pass without touching them. This is because they have already negotiated with the Kiev Rada. Everyone knew perfectly well that sooner or later what was left of the empire would come to its senses, gather into something centralized, and try to bring them back. And this means that Russia must be friends against the next reincarnation of Russia today.

Fortunately, Abkhazava knew that time was working for him, and could afford it. After all, his forces, due to the gangs flocking to profit, only grew, but the Russians in the echelons had already begun to experience the first problems with food.

Deciding that his combat capabilities had grown enough, the Georgian exchanged cunning for brute force. Having disassembled the tracks in front of the Russian echelons, Abkhazava rode slowly in an armored train on a parallel branch. The bandits, tired of their useless efforts, rushed around with hooting.

In an uncomfortable position, outnumbered Russians, surrendered their weapons. In some ways, they broke down in the trenches of the First World War. The unauthorized abandonment of the front by whole trains, revolutionary events, the collapse of the empire - all this contributed to the unprecedented decline in combat effectiveness. But even in January 1918, this was not the case for everyone.

Abkhazava's pressure was enough for four and a half echelons. Everything was going well, because the Georgians had an armored train, which was difficult to oppose with rifles and machine guns. But then he reached the artillery battery - the three-inch cars were transported on an open platform. The gunners, apparently, were furious at the unfolding picture of disarmament, and by the time the armored trains approached, they were ready. 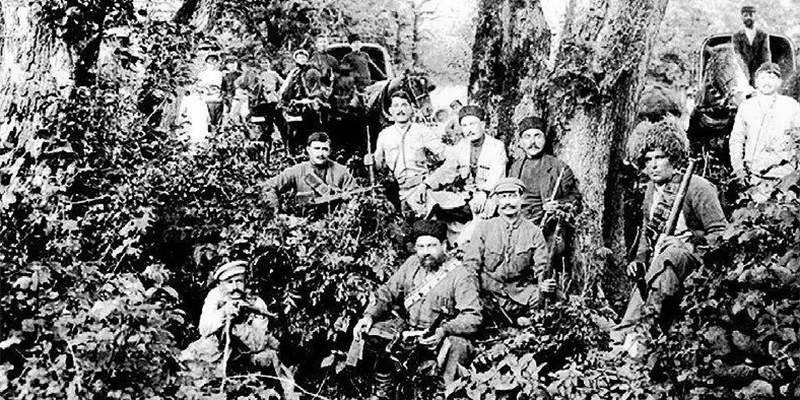 Armed Georgians
The loaded guns fired a volley, and Abkhazava was torn apart by dozens of small leaders of the Transcaucasian bandits. The Russians dexterously reloaded the guns, and the same thing happened with the armored train - it was simply impossible to miss point-blank.

Everything was immediately filled with the sounds of battle - Russian soldiers took the battle in an uncomfortable position, surrounded on all sides by a superior enemy, having far from unlimited ammunition. With the latter, it was especially bad - cartridges ran out quickly and out of order. There was no need to talk about a single organized resistance and a clear leadership of the battle.

In addition, along with the front-line soldiers, civilians traveled on the trains - hundreds of women and children. Therefore, here and there local surrenders took place. Without exception, all those who surrendered, of course, were robbed to the last shirt - and still could consider themselves lucky. There were executions, brutal beatings and rape - in short, everything that could be expected from angry bandits.

But there was no silver lining at all without good. After all, the echelons from the collapsed front continued and continued to go in an endless stream. Naturally, the soldiers saw the twisted and burning cars, saw the corpses of their colleagues, and were ready for battle from the very beginning. Echelons stopped, soldiers jumped out and dug in - it was almost impossible to take such positions with the forces of many gathered in a single fist, poorly disciplined, without a single gang management.

A few days later, the parties, realizing the stalemate of the situation, resorted to negotiations.

The Georgians from Tiflis suddenly turned out to be the unwitting allies of the Russians - the events of the last days deprived them of their armored train, people, and all weapons were eventually taken away uncontrollably by Azerbaijani gangs. Everything resembled an old anecdote -

“Have a meal of filth. And they didn't earn anything. "
Moreover, they also played in the negative - after all, in a situation when other peoples of Transcaucasia became stronger, the Georgians themselves automatically became weaker, their "share" fell.

Therefore, they urgently needed to organize the unhindered exit of Russian echelons to the north, and in as much a whole and armed form as possible. As a result, we somehow agreed with the Azerbaijanis to let the trains pass. For this, the gangs and tribes received an artillery battery from the Tiflis arsenal.

This, of course, did not mean automatic safety for the soldiers' echelons - on the way they still tried to rob them many times, but by far not with such forces and not with such consistency. And even now the Russians were ready for any development of events, kept close and willingly used force.

Several years later, some of the participants in the events near the Shamkhor station will return to Transcaucasia to conduct a reconquest, already as part of the Red Army.

In this land they already know, they will not be so international and restrained towards

"Oppressed small nations",
as would follow from leftist ideologies.

After all, they knew in practice who they were dealing with.

And what to expect from whom.